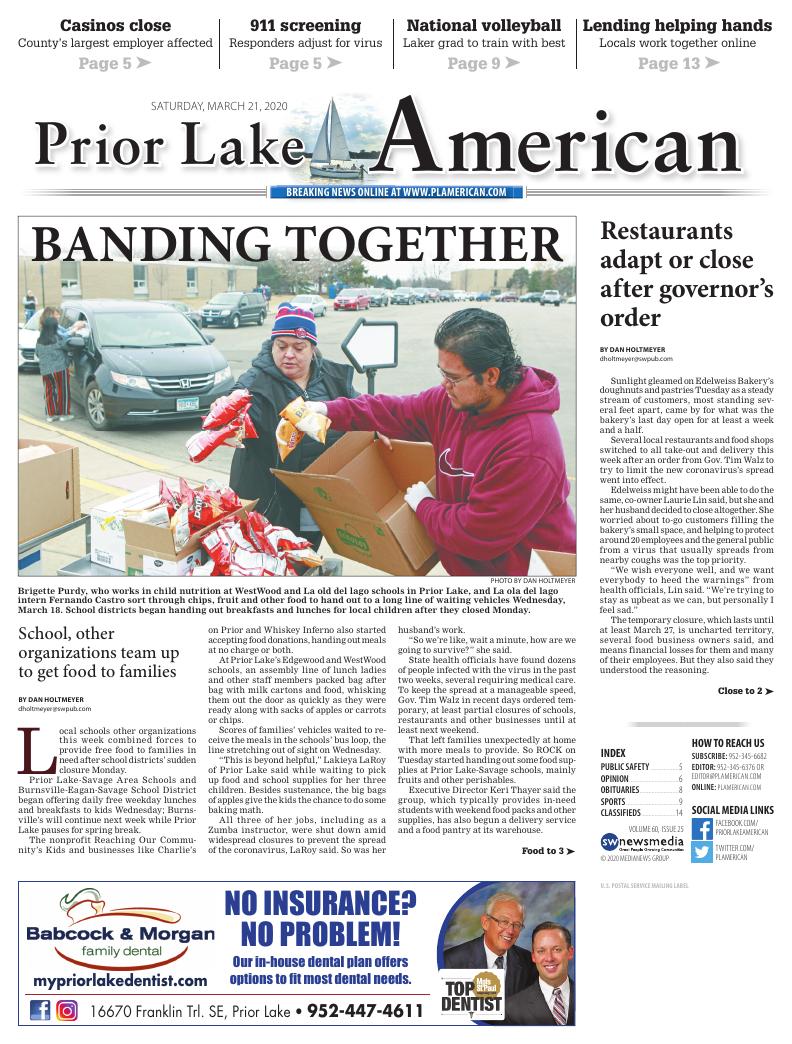 Brigette Purdy, who works in child nutrition at WestWood and La old del lago schools in Prior Lake, and La ola del lago intern Fernando Castro sort through chips, fruit and other food to hand out to a long line of waiting vehicles Wednesday, March 18. School districts began handing out breakfasts and lunches for local children after they closed Monday.

Jodi Anderson, a Prior Lake-Savage Area Schools secretary, grabs packed lunches and breakfasts to hand out to families Wednesday.

The nonprofit Reaching Our Community's Kids and businesses like Charlie's on Prior and Whiskey Inferno also started accepting food donations, handing out meals at no charge or both.

At Prior Lake's Edgewood and WestWood schools, an assembly line of lunch ladies and other staff members packed bag after bag with milk cartons and food, whisking them out the door as quickly as they were ready along with sacks of apples or carrots or chips.

Scores of families' vehicles waited to receive the meals in the schools' bus loop, the line stretching out of sight on Wednesday.

"This is beyond helpful," Lakieya LaRoy of Prior Lake said while waiting to pick up food and school supplies for her three children. Besides sustenance, the big bags of apples give the kids the chance to do some baking math.

All three of her jobs, including as a Zumba instructor, were shut down amid widespread closures to prevent the spread of the coronavirus, LaRoy said. So was her husband's work.

"So we're like, wait a minute, how are we going to survive?" she said.

State health officials have found dozens of people infected with the virus in the past two weeks, several requiring medical care. To keep the spread at a manageable speed, Gov. Tim Walz in recent days ordered temporary, at least partial closures of schools, restaurants and other businesses until at least next weekend.

That left families unexpectedly at home with more meals to provide. So ROCK on Tuesday started handing out some food supplies at Prior Lake-Savage schools, mainly fruits and other perishables.

Executive Director Keri Thayer said the group, which typically provides in-need students with weekend food packs and other supplies, has also begun a delivery service and a food pantry at its warehouse.

Families can anonymously text for the deliveries any time to 952-333-4827, Thayer said. The pantry will be open Mondays and Wednesdays from 4 to 7 p.m.

Then the schools mobilized. Burnsville-Eagan-Savage's pickup points for families with kids 18 and younger are at Nicollet and Eagle Ridge middle schools on weekdays. Families that get weekend meals from Brainpower in a Backpack will also receive those via Friday deliveries, the district said on its website.

Edgewood on Wednesday buzzed with an urgent but cheerful energy as staff members paced back and forth from the kitchen to the vehicle line clutching a half-dozen sack lunches at a time.

"You see a need, and you go fill it," said Jodi Anderson, chief secretary at Edgewood and La ola del lago.

Here are some of the area restaurants also helping with food needs, based on their recent social media announcements:

Prior Lake-Savage Area Schools staff members prepare and hand out meals and snacks at Edgewood and WestWood schools on Wednesday.

Justin Robinson prepares a takeout order at D. Fong’s Chinese Cuisine in Savage on Tuesday, March 17. The business switched to carryout only later that evening after Gov. Tim Walz ordered restrictions on restaurants and other businesses amid the coronavirus pandemic.

Sanitized pens are ready for customers to use at D. Fong’s, where owner David Fong Jr. said staff had been cleaning and sanitizing more while COVID-19 concerns continue. “I told my employees, everything we do, kick it up a step,” Fong said.

Morgan Pieri takes a customer’s order at Edelweiss Bakery on Tuesday, March 17, the last day the bakery was open for business until Gov. Tim Walz’s executive order limiting business at restaurants and other businesses lifts. “We want everyone to heed the warnings” from health experts, co-owner Laurie Lin said.

Sunlight gleamed on Edelweiss Bakery’s doughnuts and pastries Tuesday as a steady stream of customers, most standing several feet apart, came by for what was the bakery’s last day open for at least a week and a half.

Several local restaurants and food shops switched to all take-out and delivery this week after an order from Gov. Tim Walz to try to limit the new coronavirus’s spread went into effect.

Edelweiss might have been able to do the same, co-owner Laurie Lin said, but she and her husband decided to close altogether. She worried about to-go customers filling the bakery’s small space, and helping to protect around 20 employees and the general public from a virus that usually spreads from nearby coughs was the top priority.

“We wish everyone well, and we want everybody to heed the warnings” from health officials, Lin said. “We’re trying to stay as upbeat as we can, but personally I feel sad.”

The temporary closure, which lasts until at least March 27, is uncharted territory, several food business owners said, and means financial losses for them and many of their employees. But they also said they understood the reasoning.

“Maybe this is what you need, short-term hurt for the long-term gain,” said David Fong Jr., whose family’s Chinese food restaurants in Savage, Prior Lake and Bloomington switched to carryout only, using the dining areas for the wait so customers can stay far apart. “I just hope it is short.”

At Boathouse Brothers Brewing Company, co-owner Emmett Swartout on Tuesday said he was working on a plan for deliveries to interested customers.

“It’ll probably just be me in my car, keeping the business alive,” he said. “We’ll still keep brewing and hopefully have full coolers ready to go for when the moratorium on fun ends.”

Food service closures alone will affect thousands of food workers around Scott County, based on recent census estimates. Swartout and Lin said they helped their employees get in touch with the state’s unemployment insurance program, which Walz sped up and opened to affected workers in another executive order.

Morgan Pieri, 24, an Edelweiss cashier, said she lives with her parents but has several hundred dollars in monthly student loan payments to worry about. She said Tuesday she was looking for odd jobs; some customers asked for her contact information to help, and she might paint with her dad.

“We’ll be back, but there’s nothing we can really do,” she said.

On the other hand, Fong said most of his servers will be able to switch to carryout-related work. D. Fong’s in Savage typically gets more takeout business than dine-in.

“So we’re prepared,” he said. “It’s still going to be a financial loss for us, but at least we can stay in operation.”

One older couple walking out the door of Edelweiss grumbled that the whole situation was ridiculous and overblown, but several customers at multiple businesses said they were eager to support them however possible.

Lin thanked everyone for their support and said the shop donated leftover food and supplies to the Community Action Partnership of Scott, Carver & Dakota Counties.

Deanna Contonikolas and Gayle Wright, who work near the bakery, said they came midday Tuesday for “one last hurrah” before the doors shut.

“I really worry about the people who do this kind of work,” Contonikolas said, adding the government should step in to help with wages and freeze loans. She supported shutdowns in general, though she wondered whether a small city like Prior Lake would need to be included.

“But we can’t make exceptions,” Wright said — the next day, the country reported its first known coronavirus case was a Prior Lake resident. “Hopefully it’s just for the couple weeks.” 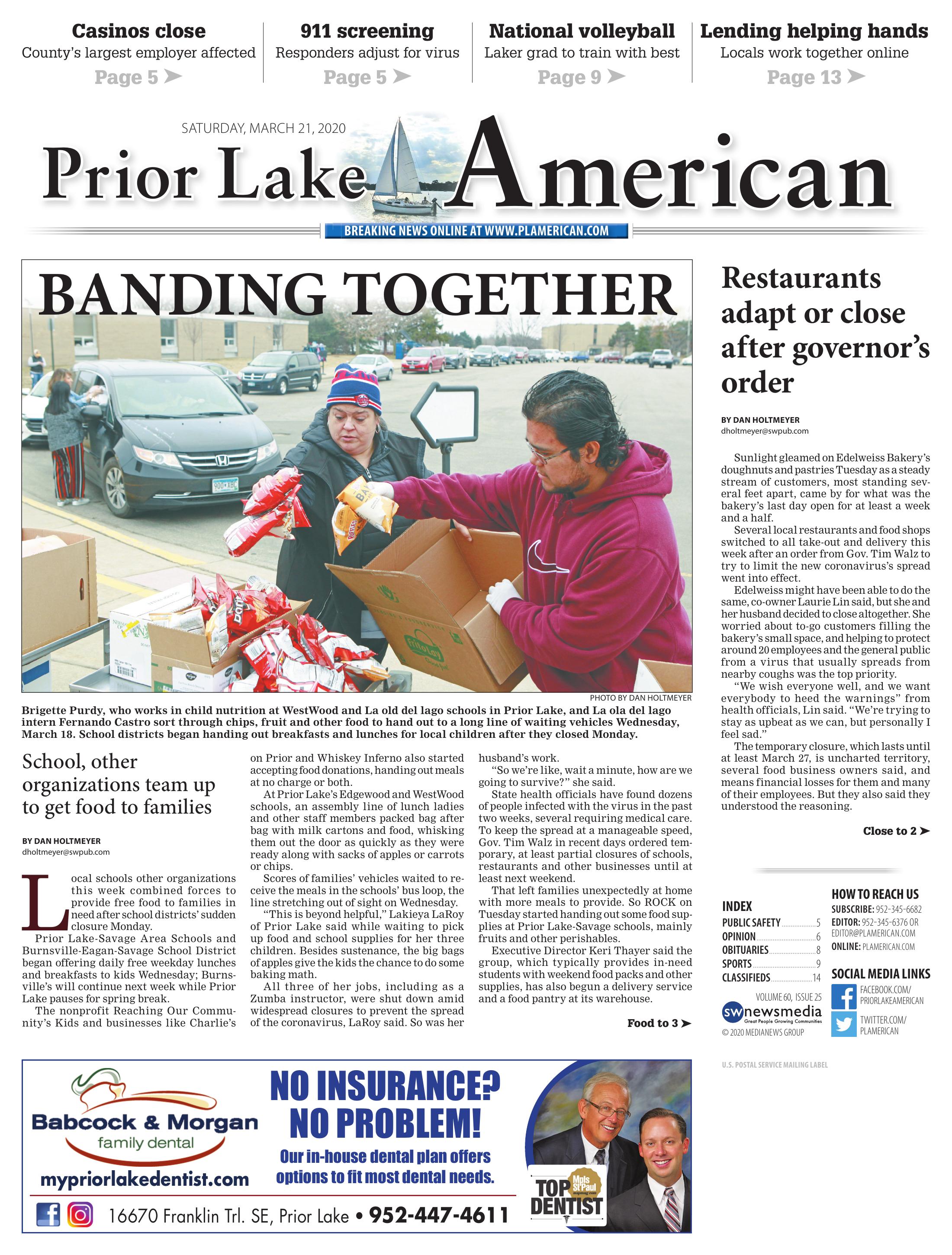 School meals on the go.mp4