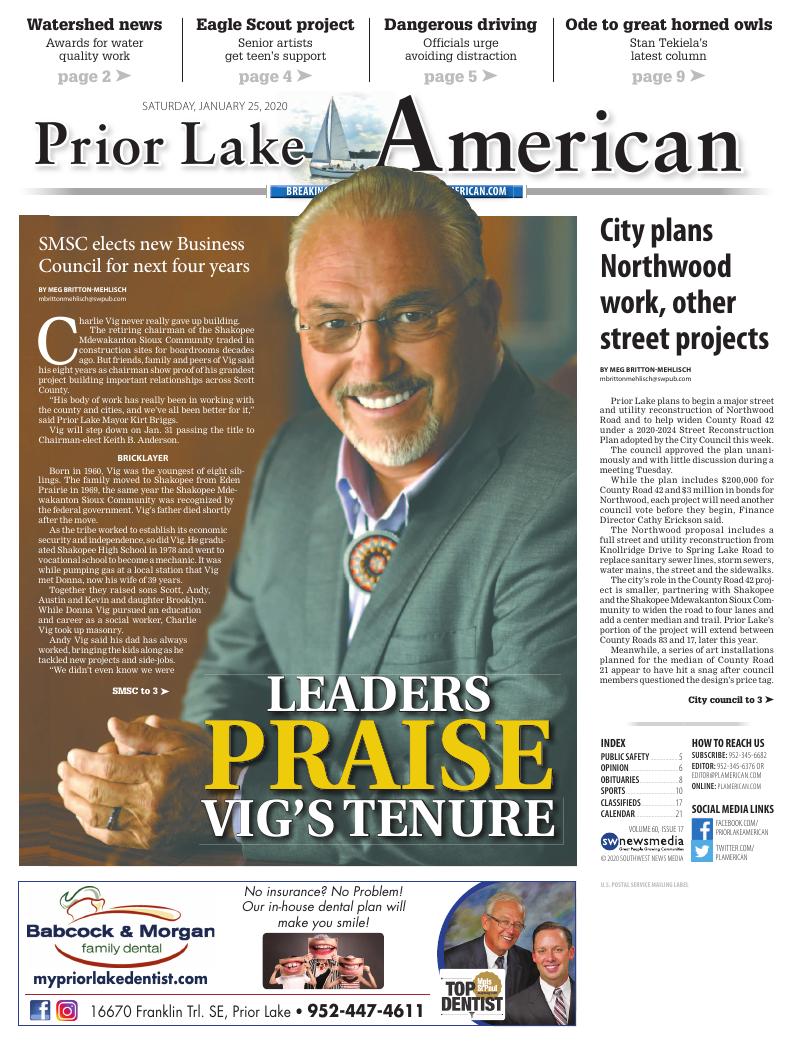 Shakopee Mdewakanton Sioux Community Chairman Charlie Vig, center, and other Prior Lake, Prior Lake Rotary Club and Mdewakanton Sioux community members pose for a ribbon-cutting after the completion of a trail project at Pike Lake in 2015. The community had given a $76,000 grant to Prior Lake to help the project. Vig is retiring at the end of this month.

The retiring chairman of the Shakopee Mdewakanton Sioux Community traded in construction sites for boardrooms decades ago. But friends, family and peers of Vig said his eight years as chairman show proof of his grandest project building important relationships across Scott County.

“His body of work has really been in working with the county and cities, and we’ve all been better for it,” said Prior Lake Mayor Kirt Briggs.

Vig will step down on Jan. 31 passing the title to Chairman-elect Keith B. Anderson.

Born in 1960, Vig was the youngest of eight siblings. The family moved to Shakopee from Eden Prairie in 1969, the same year the Shakopee Mdewakanton Sioux Community was recognized by the federal government. Vig’s father died shortly after the move.

As the tribe worked to establish its economic security and independence, so did Vig. He graduated Shakopee High School in 1978 and went to vocational school to become a mechanic. It was while pumping gas at a local station that Vig met Donna, now his wife of 39 years.

Together they raised sons Scott, Andy, Austin and Kevin and daughter Brooklyn. While Donna Vig pursued an education and career as a social worker, Charlie Vig took up masonry.

Andy Vig said his dad has always worked, bringing the kids along as he tackled new projects and side-jobs.

“We didn’t even know we were working,” Andy said. “We were just bonding with him. That’s how he bonded with us and how he still does today.”

In 1992, Vig took his first job with the Mdewakanton community overseeing three people as a project manager on the newly built Mystic Lake Casino. Over three years he worked his way up to vice president of facilities. By 1995, he was elected to the tribe’s Gaming Enterprise Board.

In the late-2000s, Vig’s name started to come up as a candidate for the tribe’s Business Council, the three-member group responsible for day-to-day operations of tribal government and for implementing the decisions of the tribe’s General Council, which comprises all adult enrolled members.

After initially pushing back on the idea, hoping to have more time with his growing children, Vig ran and was elected to the position of vice-chairman in 2012. When former Chairman Stanley Crooks died in August 2012, Vig took on the role.

“I was really hoping to have a four-year mentorship under Stanley to see if I even liked the job or could do the job,” Vig said. “I was really comfortable with being the guy behind the guy, the second-in-command.”

Vig said he had to learn quickly, figuring out how to continue the partnerships his predecessor had begun to foster with neighboring communities. He was formally elected to the role in 2016.

“I would say that he didn’t have to say much because his actions kind of spoke for him, because he had been working for the community his whole life,” Andy Vig said.

City and county officials point to Vig as the man who brought the tribe and surrounding communities together: someone who would explain Mdewakanton history and perspective while also finding common ground with others.

Shakopee City Administrator Bill Reynolds said Vig was always a visionary and that he admired the tribe’s strong relationship with Shakopee under his leadership.

“He understands that our common past — though sometimes difficult — should not be a barrier to our mutually beneficial future,” Reynolds said.

Scott County Commissioner Mike Beard said that when Vig was elected in 2012, he could feel that the “turbulent” relationship between both communities was shifting.

“His compassion for his neighbor and his affinity for respect and peacrableness and unity where possible really comes to the fore when you work with the guy,” Beard said. “I think frankly he was God’s man for the moment.”

Beard and Vig became acquainted around 2010, when Beard served as the state representative for Shakopee and Prior Lake and Vig was on Gaming Enterprise board.

Beard said the cities and county were at odds with the tribe at the time over a state proposal to add slot machines to Canterbury Park. When the two met at a Scott County Historical Society fundraiser dance hosted at Vig’s hangar, they bonded over their love of aviation and flying.

Canterbury and the community eventually reached an agreement to drop the slot plan and partner on a shared marketing campaign.

“I think everyone (in county leadership) saw Charlie as a friend and neighbor,” Beard said. “He really went out of his way to make sure that he was approachable and accessible.”

Briggs said Vig’s openness and willingness to sit down with someone over a meal or a drink was crucial to the close relationship that developed between the tribe and neighboring cities over the last decade.

“He is somebody that I look to emulate, and I’m going to miss him,” Briggs said.

The Scott County Board of Commissioners and the Prior Lake and Shakopee city councils this week declared Jan. 27 Chairman Charlie Vig Day in honor of the chairman’s impact.

The proclamations note Vig’s role in projects across the region: the newly opened South Water Treatment Plant serving his community and Prior Lake, the multimillion-dollar expansion of County Road 83, more than $30 million in infrastructure improvements.

Under Vig’s tenure the tribe has given throughout Indian Country. Since 2012, the tribe has provided more than $218 million in economic development loans and $120 million for education, health care, infrastructure, and cultural preservation initiatives to other tribes.

Vig also worked hard with leaders from the Oceti Sakowin, or Seven Council Fires of the Lakota, Nakota, and Dakota nations, to preserve and protect sacred lands in the central Black Hills in a federal trust in 2012.

“You could see and just hear in my dad’s voice that he cared so much about the community. I think he looked at the community and everybody in there as almost his own family, and that’s kind of the Dakota way to care for your relatives,” Andy Vig said.

But now the elder Vig says it’s time to retire and return to working on custom Harley-Davidsons, flying his plane, traveling with his wife and enjoying his six grandchildren.

“I feel comfortable, and we’ve got some great, great leaders coming up that I have some high hopes for. And hopefully I’ll be here to help advise them or be on call if they want me,” he said. “It will run without me.”

Members of the Shakopee Mdewakanton Sioux Community have elected Keith Anderson, Cole Miller and Rebecca Crooks-Stratton as the next Business Council, the community announced this week.

This will be Anderson's fifth consecutive term on the council, his first as chairman. Anderson was secretary/treasurer for eight years before becoming vice-chairman in 2012.

He is involved in environmental efforts as the board chairman for Koda Energy and a board member for the community's Hotel Development LLC, which owns the JW Marriott hotel at Mall of America.

Crooks-Stratton returns to the council this year in her second term as secretary/treasurer. She leads the tribe's philanthropic campaign to improve Native American education in Minnesota and is a member of the University of Minnesota Foundation’s Board of Trustees and the Prior Lake Indian Education Parent Advisory Committee.

Miller, the vice-chairman, is new to the council and serves as the community liasion for Mdwekakaton Public Safety. In the last two years he has chaired the tribe's Wacipi Committee.

The council will be sworn in on Jan. 31.

This rendering, provided by the city of Prior Lake, shows a rough idea of what a street art project will look like. The City Council voted to take the boat mast-like structures out of the highways 13 and 21 construction project.

Prior Lake plans to begin a major street and utility reconstruction of Northwood Road and to help widen County Road 42 under a 2020-2024 Street Reconstruction Plan adopted by the City Council this week.

The council approved the plan unanimously and with little discussion during a meeting Tuesday.

While the plan includes $200,000 for County Road 42 and $3 million in bonds for Northwood, each project will need another council vote before they begin, Finance Director Cathy Erickson said.

The city’s role in the County Road 42 project is smaller, partnering with Shakopee and the Shakopee Mdewakanton Sioux Community to widen the road to four lanes and add a center median and trail. Prior Lake’s portion of the project will extend between County Roads 83 and 17, later this year.

Meanwhile, a series of art installations planned for the median of County Road 21 appear to have hit a snag after council members questioned the design’s price tag.

The original streetscaping plans, proposed in 2018 as the aesthetic completion of work on County Road 21, created a nautically-themed welcome to the city with railings with images of waves and oars, 11 sailboat-mast-like lighting features, bollards at the crosswalks and a banner across the highway.

In June the council decided to remove the mast installation from the 21 project after bids for the project came in around $560,000.

“The cost came in way higher than what that (Downtown Character Advisory) committee had seen,” City Manager Jason Wedel told the council Tuesday.

Wedel said that estimates for a series of LED lights for the cables were nearing between $40,000 and $45,000 on their own. Without the lights, the masts are estimated to cost around $155,000.

Some council members said they felt dedicating that much money to the installation seemed irresponsible when the final bid on the county road project was over budget.

“For some reason this installation does not strike me as the right art installation for our community,” Councilman Kevin Burkart said. “This would be one piece, the only piece, that I would call out and go back to the community and say what do think about taking a different approach to this.”

Councilman Zach Braid and Mayor Kirt Briggs pushed the council to remember the community investment in the project.

“To reverse course would be disingenuous,” Braid said. “One of our main points in real estate is that if a city isn’t willing to invest in streetscaping, you better question about investing in them, because they won’t invest in themselves.”

The city will receive final bids on the median monuments in the first week of February. The project is set for reconsideration at the city’s Feb. 18 workshop. 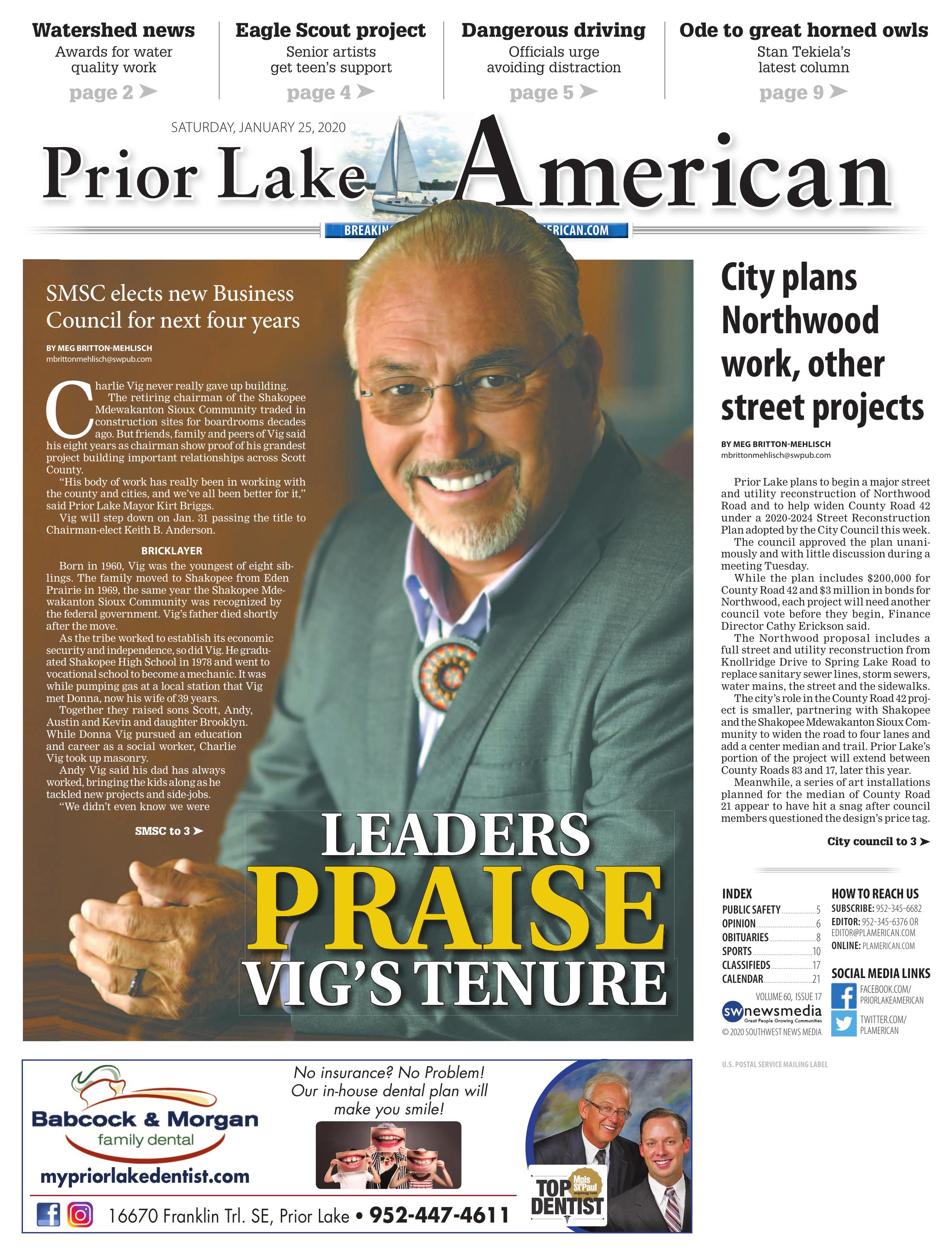