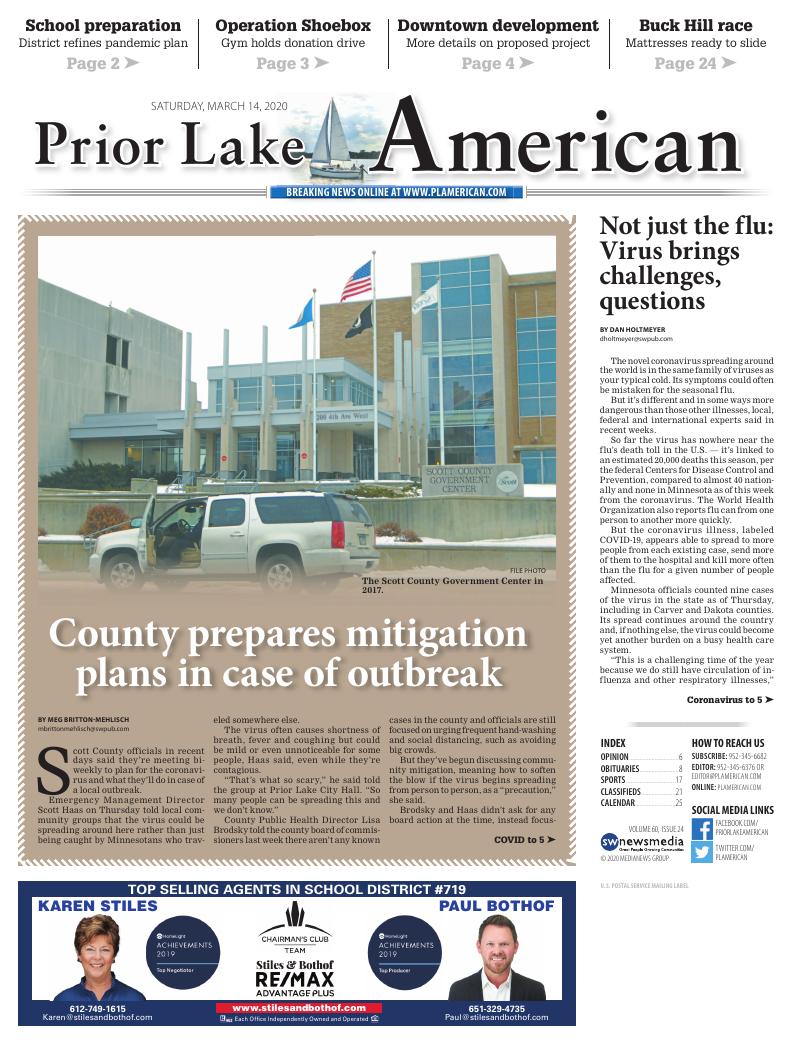 Scott County officials in recent days said they're meeting bi-weekly to plan for the coronavirus and what they'll do in case of a local outbreak.

Emergency Management Director Scott Haas on Thursday told local community groups that the virus could be spreading around here rather than just being caught by Minnesotans who traveled somewhere else.

The virus often causes shortness of breath, fever and coughing but could be mild or even unnoticeable for some people, Haas said, even while they're contagious.

"That's what so scary," he said told the group at Prior Lake City Hall. "So many people can be spreading this and we don't know."

County Public Health Director Lisa Brodsky told the county board of commissioners last week there aren't any known cases in the county and officials are still focused on urging frequent hand-washing and social distancing, such as avoiding big crowds.

But they've begun discussing community mitigation, meaning how to soften the blow if the virus begins spreading from person to person, as a "precaution," she said.

Brodsky and Haas didn't ask for any board action at the time, instead focusing on updating the commissioners on what the county's doing.

The novel coronavirus can be more severe for older people and others with health issues, according to the federal Centers for Disease Control and Prevention. Most people recover but might need medical care more often than with the flu, which could be a strain on providers.

Minnesota officials counted nine cases of the virus in the state as of Thursday.

"I think we need to realistic and be prepared," Brodsky said during an interview Monday. "Now is the time to prepare at the individual, organization and community level."

That means identifying which county activities that are considered critical functions — services like driver's licenses and tabs, for example — and planning for how business can carry on as usual in those areas if more staff have to stay home because of illness or possible exposure.

It also means the county is reviewing employees' ability to work from home, identifying critical supplies and suppliers and considering canceling large community events, among other measures.

The exercise, being called Operation Minne-Meds, is scheduled for June 17 at the Shepherd of the Lake Lutheran Church in Prior Lake. For more than a month the county has been inviting residents to sign up to volunteer as actors in the exercise, allowing more than 80 county staff members to test their response.

"Our plan is to still test our close points of dispensing in June unless they cancel the exercise because we have widespread coronavirus," Brodsky said.

Brodsky said even without the exercise, she believes the county is well-prepared thanks in part to plans created during previous outbreaks of swine flu, Ebola and other diseases.

Those plans help counties think through and prepare for a large variety of responses, including distributing food and medicine to people in quarantine, providing temporary housing and a mass dispensing of medicine if an anti-viral is produced for the virus.

What counties actually do comes down in part to direction from the state, Brodsky said.

Haas on Thursday urged members of the FISH Partner Network, a group of local service organizations, and of the public to take steps to prepare for emergencies of all kinds, such as having several days of food on hand, batteries and other basic supplies.

The mass buying of goods like toilet paper is a natural, emotional reaction to not being prepared, he added.

If the outbreak became bad enough in the county, staff might ask the board to cancel  the Future Leaders of Scott County Day on April 17, for example, Haas told the board. The event brings together 100 students from districts across the county for a kind of local government 101 course.

"Knowing that students tend to be asymptomatic but can still spread the disease, we may have to think about if it's still reasonable to offer that service or if we offer it in the same way we have in the past," Haas said.

Things are changing fast. When Brodsky and Haas presented to the county board a week ago, there were 16 confirmed cases, 27 presumptive cases and 2 deaths across 10 states — none in Minnesota.

As of Thursday, the Centers for Disease Control and Prevention reported more than 1,200 confirmed and presumptive cases and 36 coronavirus-linked deaths across 42 states and the District of Columbia. =

"It's been almost doubling every day in the US," Brodsky said. "It's going to continue to increase."

An illustration of a coronavirus shows the proteins that stud its surface and allow it to hook onto human cells and begin the attack that causes disease. Coronaviruses, named for their spiky appearance, include viruses that cause the common cold and a more serious new illness spreading around the world.

The novel coronavirus spreading around the world is in the same family of viruses as your typical cold. Its symptoms could often be mistaken for the seasonal flu.

But it’s different and in some ways more dangerous than those other illnesses, local, federal and international experts said in recent weeks.

So far the virus has nowhere near the flu’s death toll in the U.S. — it’s linked to an estimated 20,000 deaths this season, per the federal Centers for Disease Control and Prevention, compared to almost 40 nationally and none in Minnesota as of this week from the coronavirus. The World Health Organization also reports flu can from one person to another more quickly.

But the coronavirus illness, labeled COVID-19, appears able to spread to more people from each existing case, send more of them to the hospital and kill more often than the flu for a given number of people affected.

Minnesota officials counted nine cases of the virus in the state as of Thursday, including in Carver and Dakota counties. Its spread continues around the country and, if nothing else, the virus could become yet another burden on a busy health care system.

“This is a challenging time of the year because we do still have circulation of influenza and other respiratory illnesses,” Minnesota Department of Health senior epidemiologist Kathy Como-Sabetti told reporters Monday.

She joined the chorus urging the public to wash hands, cover coughs and stay home while sick — “it is absolutely not the time” to tough it out for work or school, she said.

Some of the basics

The virus often causes shortness of breath, fever and coughing, according to the federal Centers for Disease Control and Prevention.

Many of the disease’s specifics remain unknown or unclear, the CDC says, and that’s just another reason for health care providers’ alarm. No one’s immune system encountered it before it appeared in December, and researchers don’t have a vaccine.

And while President Donald Trump has said he hopes it’ll fade in warmer weather, as colds and the flu tend to do, CDC scientists have repeatedly said they don’t know yet whether that’s true. Even if it is, that could mean the virus just comes back every year.

“The issue now with this is that there’s a lot of unknowns,” Dr. Anthony Fauci, an immunologist and member of Trump’s coronavirus task force, said at the White House earlier this year.

COVID-19 sets itself up in the throat and lungs, so it mainly spreads through coughs and sneezes, which spew out little virus clouds that can get breathed in by others or land on hands and desktops, doorknobs and gas pumps.

Unwashed hands that pick up the bug can then carry it to the respiratory tract through food or touches around the face, for example.

Researchers have found single infected person might be able to spread coronavirus to two or more others, though context and location matter; the flu typically spreads to one or two.

The CDC advises 20-second hand-washing, coughing into elbows instead of hands and for older people and those with other health issues to avoid travel and crowds, all to slow down or break the chain of infection.

Regular hand soap and hand sanitizer work by essentially dissolving the viruses so they can’t latch onto human cells and attack. Soap’s better than sanitizer at the job, the CDC and others have said, and it doesn’t have to be antibacterial or anything fancy to do the trick.

Viruses are so unimaginably tiny that even the lines of a fingerprint might as well be mountain ranges, full of ridges and caves for germs to cling to. That’s where the 20-second advice comes in: A longer scrub can reach more viruses than a brief splash of water.

COVID-19 also appears to split by age, being more dangerous for older people but largely leaving children alone. Como-Sabetti on Monday said it’s not clear whether kids catch it less often or just don’t experience the worst of it.

Children are often ideal carriers for germs anyway, she added. So if the virus starts to spread around Minnesota, schools might close to protect people of all ages.

Once someone catches the virus, they need oxygen or other medical care roughly 20% of the time, according to the World Health Organization, several times the percentage of flu cases that wind up in hospitals.

Researchers have found a small proportion have died, ranging from one to four in 100 known cases — again several times the flu’s typical rate. That number could change, though, as researchers might be missing people who get the disease with mild effects. 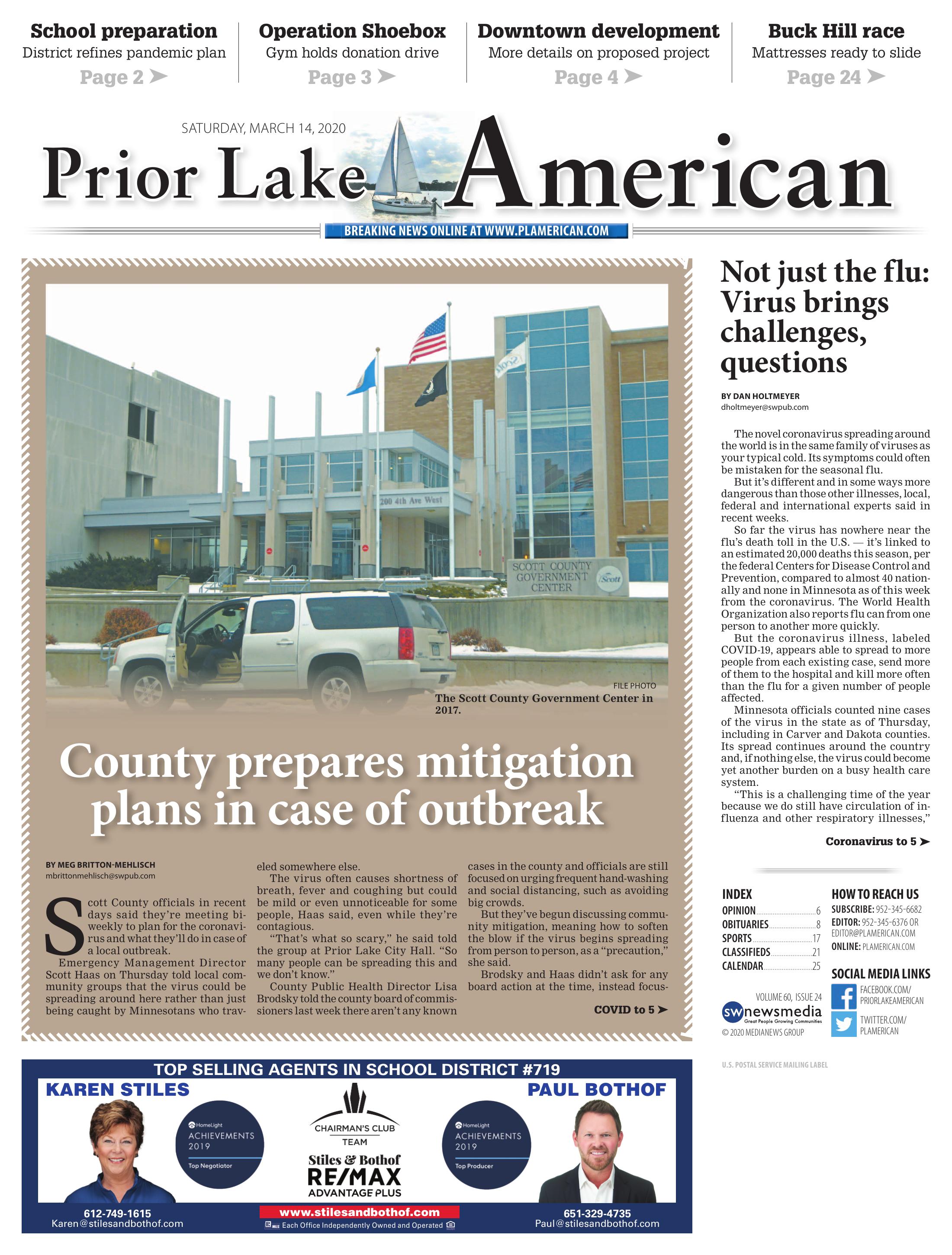