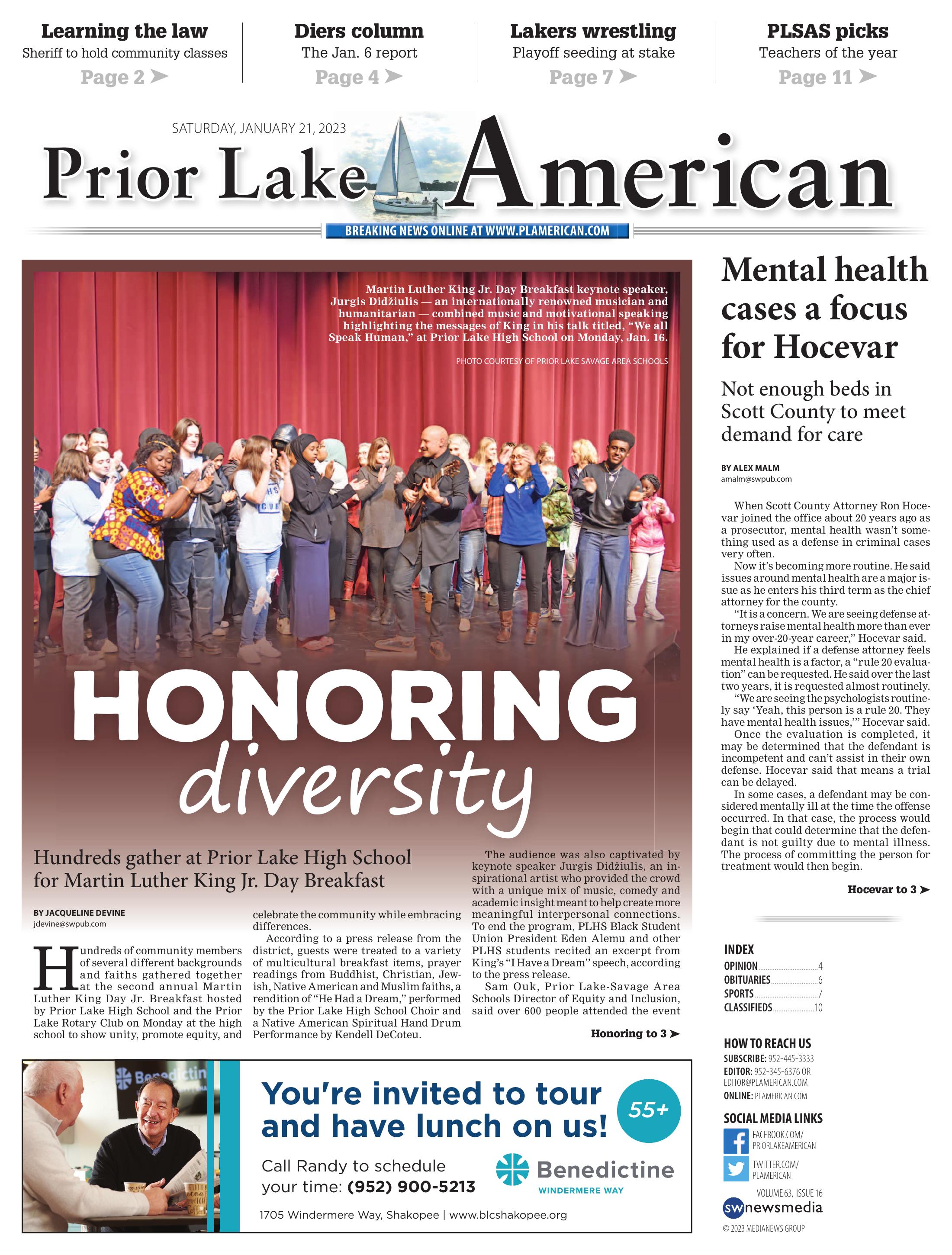 Prior Lake High School students recite Martin Luther King Jr.’s, “I Have a Dream” speech at the second annual MLK Jr. Day Breakfast at the high school on Monday, Jan. 16.

Hundreds of community members gathered at Prior Lake High School on Monday, Jan. 16, to celebrate unity during the second annual Martin Luther King Jr. Day Breakfast hosted by the high school and the Prior Lake Rotary Club.

The Prior Lake High School Choir performed a rendition of “He Had a Dream,” at the second annual Martin Luther King Jr. Day Breakfast at the high school on Monday, Jan. 16.

Following the Martin Luther King Jr. Day Breakfast, there were a variety of service projects at the high school and around the community that individuals were welcomed to participate in.

Hundreds of community members of several different backgrounds and faiths gathered together at the second annual Martin Luther King Day Jr. Breakfast hosted by Prior Lake High School and the Prior Lake Rotary Club on Monday at the high school to show unity, promote equity, and celebrate the community while embracing differences.

According to a press release from the district, guests were treated to a variety of multicultural breakfast items, prayer readings from Buddhist, Christian, Jewish, Native American and Muslim faiths, a rendition of “He Had a Dream,” performed by the Prior Lake High School Choir and a Native American Spiritual Hand Drum Performance by Kendell DeCoteu.

The audience was also captivated by keynote speaker Jurgis Didžiulis, an inspirational artist who provided the crowd with a unique mix of music, comedy and academic insight meant to help create more meaningful interpersonal connections. To end the program, PLHS Black Student Union President Eden Alemu and other PLHS students recited an excerpt from King’s “I Have a Dream’’ speech, according to the press release.

Sam Ouk, Prior Lake-Savage Area Schools Director of Equity and Inclusion, said over 600 people attended the event that was also in combination with a staff inservice day.

“We printed 300 programs and we ran out. We had a little over 600 people there,” Ouk said. “Overall, it was a community event that I think really included the whole community. Because it was also a teacher’s inservice day, there were close to 300 people in the auditorium listening to different prayers. We had representation from Buddhism, Judaism, Christianity, Islam and Native American spiritual beliefs. I did a reading from my Buddhist background as well.”

Ouk said all the speakers shared a common message about peace and unity.

“The keynote speaker was amazing,” Ouk said. “His key message was that our diversity and our differences is what brings meaning to unity to our community. Celebrating and recognizing our diversity and individuality is what makes the world beautiful.”

Ouk added that the event was an astonishing success and looks forward to more in the future.

“It was a day where the whole community did come together and I’m going to be talking about this day for a long time,” he said.

Scott County Attorney Ron Hocevar was sworn in for his third term by Judge Tanya O’Brien on Jan.3

When Scott County Attorney Ron Hocevar joined the office about 20 years ago as a prosecutor, mental health wasn’t something used as a defense in criminal cases very often.

Now it’s becoming more routine. He said issues around mental health are a major issue as he enters his third term as the chief attorney for the county.

“It is a concern. We are seeing defense attorneys raise mental health more than ever in my over-20-year career,” Hocevar said.

He explained if a defense attorney feels mental health is a factor, a “rule 20 evaluation” can be requested. He said over the last two years, it is requested almost routinely.

“We are seeing the psychologists routinely say ‘Yeah, this person is a rule 20. They have mental health issues,’” Hocevar said.

Once the evaluation is completed, it may be determined that the defendant is incompetent and can’t assist in their own defense. Hocevar said that means a trial can be delayed.

In some cases, a defendant may be considered mentally ill at the time the offense occurred. In that case, the process would begin that could determine that the defendant is not guilty due to mental illness. The process of committing the person for treatment would then begin.

Hocevar said the terms of the commitment depends on care providers and the feedback given to the judge. “It’s a complicated area of the law,” he said.

However, it is unlikely that commitment would last indefinitely.

“I would say they are rarely committed forever,” Hocevar said.

He said mental health is being used to some extent as a defense when “maybe it shouldn’t be.”

“I certainly don’t deny someone their right for it to be explored,” he said. “If there truly is a mental health issue, we want to get that recognized. We want to get it dealt with.”

Currently, there aren’t enough beds and facilities to meet the demand, meaning people sit in jail longer than they should.

“That’s a problem. I agree that’s a huge problem,” Hocevar said. “They need to get the help they are required to have sooner than (what) is being made available now.

“That needs to be addressed on a state government level.”

Hocevar said he isn’t sure if the number of people struggling with mental health has increased over the past two years, or if it’s because people are more willing to admit when there is a problem.

“Either way, I don’t deny there’s been an increase in mental health” struggles, he said.

Mental health isn’t the only issue his office must focus on in 2023, Hocevar said.

He said he has made it a focus of his office to help victims, and will continue to do so.

Hocevar pointed to the addition of a victim witness coordinator to his office, bringing the total up to four. “I think that’s crucial to help victims through the process,” he said.

When someone is a victim of a crime, he said, it can be daunting for them to go to court and face the defendant, especially when it comes to “persons crimes.”

“We want to make sure those victims are treated respectfully, treated appropriately, given the help they need and make sure they are able to come to court and seek the justice they deserve,” Hocevar said.

Under Hocevar’s administration, a Veterans Treatment Court and Drug Court have been created in Scott County.

The specialty courts are used as an alternative to incarceration, allowing a defendant to complete a series of requirements that typically include addiction treatment. Once the defendant graduates from the program, the charges against them may be dropped.

Hocevar says he was to take a “good look at the data” and make sure people are getting the assistance needed to be productive members of society. “We want the courts to be successful, (and) we want the people to be successful,” he said.

Going into his third term, Hocevar said he hopes the specialty courts will continue.

Unlike traditional court sentences, Hocevar said that those who meet the eligibility criteria have to be willing to be part of it.

“These courts are much more difficult for a defendant to navigate through than going through a regular court,” he said.

Hocevar said that currently neither of the courts are full. “It’s not like we’re turning people away yet,” he said.

One of the first actions Hocevar took when he became county attorney was making the office completely paperless and making sure everyone in the office had a laptop.

It meant that when the pandemic happened, his office didn’t miss a beat.

“We were way ahead of the pandemic. Once the pandemic hit we had a seamless transition,” Hocevar said.

Hocevar explained that he feels it was a big accomplishment by him since it meant prosecutors were able to continue to do their jobs despite the pandemic.

He noted that some counties across the state were still using paper files.

Hocevar said that “Scott County has a great law enforcement community” and that the vast majority of people in the county have respect for law enforcement.

In his new term, he said, he hopes to keep a strong relationship with the police departments across the county. “I want to maintain and build on that relationship,” Hocevar said.

Strong relationships help both entities do their jobs and are beneficial for public safety, he said.