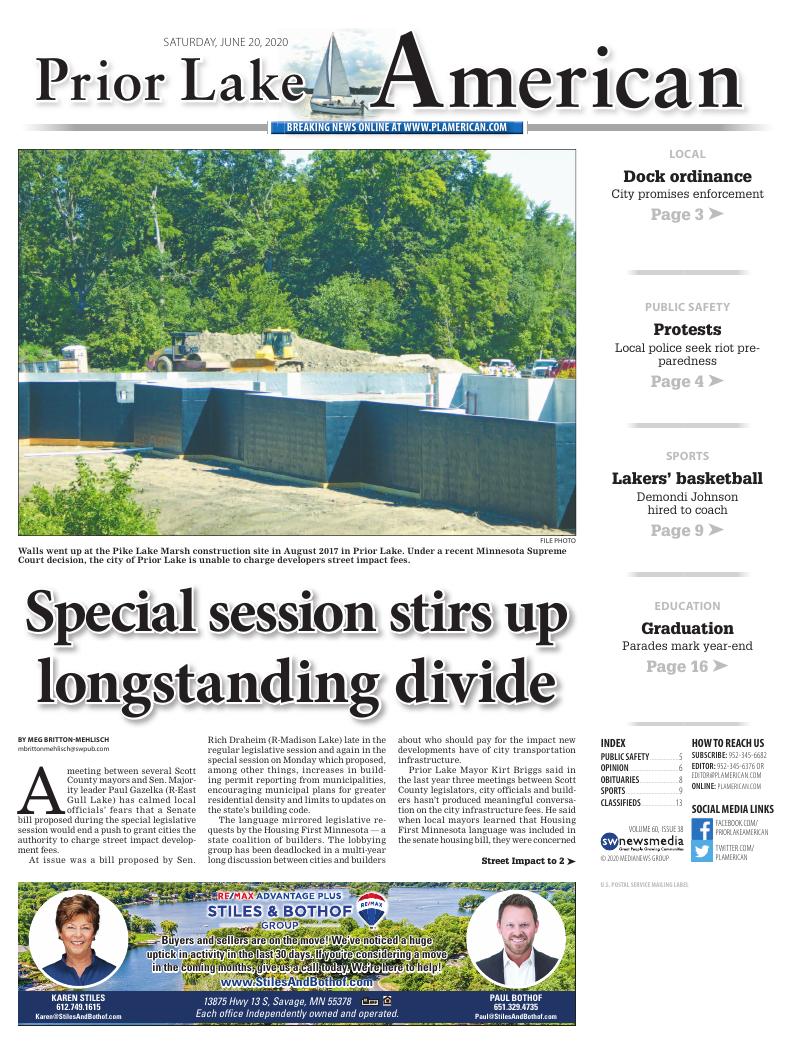 Walls went up at the Pike Lake Marsh construction site in August 2017 in Prior Lake. Under a recent Minnesota Supreme Court decision, the city of Prior Lake is unable to charge developers street impact fees.

At issue was a bill proposed by Sen. Rich Draheim (R-Madison Lake) late in the regular legislative session and again in the special session on Monday which proposed, among other things, increases in building permit reporting from municipalities, encouraging municipal plans for greater residential density and limits to updates on the state’s building code.

The language mirrored legislative requests by the Housing First Minnesota — a state coalition of builders. The lobbying group has been deadlocked in a multi-year long discussion between cities and builders about who should pay for the impact new developments have of city transportation infrastructure.

Prior Lake Mayor Kirt Briggs said in the last year three meetings between Scott County legislators, city officials and builders hasn’t produced meaningful conversation on the city infrastructure fees. He said when local mayors learned that Housing First Minnesota language was included in the senate housing bill, they were concerned the organization would be less likely to continue a discussion on street impact fees if their housing reform desires were being met.

The housing discussion “can’t be a la carte,” Briggs said. “That to me has been the way things have occurred — they wind up getting a la carted and you loose the opportunity for the deeper, broader, more meaningful lasting solution. Let’s not squander this opportunity.”

Briggs called the special legislative session which began on June 12 and was predicted to end on Friday, June 19, a “crescendo” and “DEFCON-5” for the issue during a Prior Lake City Council work session Monday.

Briggs and Shakopee Mayor Bill Mars, Savage Mayor Janet Williams, Jordan Mayor Tanya Velishek, New Prague Mayor Chuck Nickolay and Elko New Market Mayor Joe Julius wrote to Gazelka on May 26 saying that the “local taxpayers and local authority have lost their voice with the Senate Majority and are under attack,” as a result of the draft bill.

The mayors argued that the GOP’s claims that the draft would increase housing affordability in the state actually “rob Peter to pay Paul with no assurance of lower housing costs for anyone.”

Briggs said that after the mayors’ conversation with Gazelka, he feels confident that the regional concerns were heard and that “we will not see any movement or the potential for movement that could hurt us — taxpayers and cities.”

Housing First Minnesota Executive Director David Siegel disagreed that the only way to have a productive housing discussion is to a singular discussion.

“I think housing is a center point of conversation at the capital right now, but it’s way broader than street impact fees,” Siegel said. “It has to do with the broader conversation about affordability and sustainability.”

“We’ve got to give our builders the flexibility and the tools to meet the market,” he added.

Siegel said Housing First is concerned with creating the conditions for builders to build to the market demand — especially affordable products. He said following the outbreak of the coronavirus the building industry has seen an increased desire to address housing affordability. Siegel argue that to meet those needs the legislature needs to discuss all the things that may increase a house’s price — whether it’s street impact fees or design or permitting requirements.

“I think infrastructure will be part of all future discussions, but it’s going to have to be part of a much larger discussion that addresses the many factors that lead to a lack of affordability,” Siegel said.

Both Briggs and Siegel said that they always welcome communication and look forward to continuing housing discussions at the legislative level.

Reaching an agreement on the development street impact fee could mean millions of dollars for growing Scott County cities. Until a 2018 Minnesota Supreme Court decision that affirmed cities could not charge the fees, Prior Lake charged a street impact fee of $6,500 per acre for new developments to cover newly needed roads nearby.

City officials estimate the court decision will cost the city more than $25 million over the next few decades based on the amount of undeveloped land in the city, including recent annexations..

Briggs said regional unity around the issue has been important in making street impact fees a priority issue for local representatives. In February, the city passed a resolution urging state legislators to adopt a statute for the fees. The Scott County Board of Commissioners and the cities of Savage, New Prague, Belle Plaine, Jordan, Elko New Market, Shakopee and Credit River Township followed suit.

During the regular session, Sens. Eric Pratt (R-Prior Lake) and John Hoffman (DFL-Champlin) and Reps. Brad Tabke (DFL-Shakopee) and Tony Albright (R-Prior Lake) introduced bills that would give cities the ability to charge a developer for a new subdivision’s impact on the local transportation system. 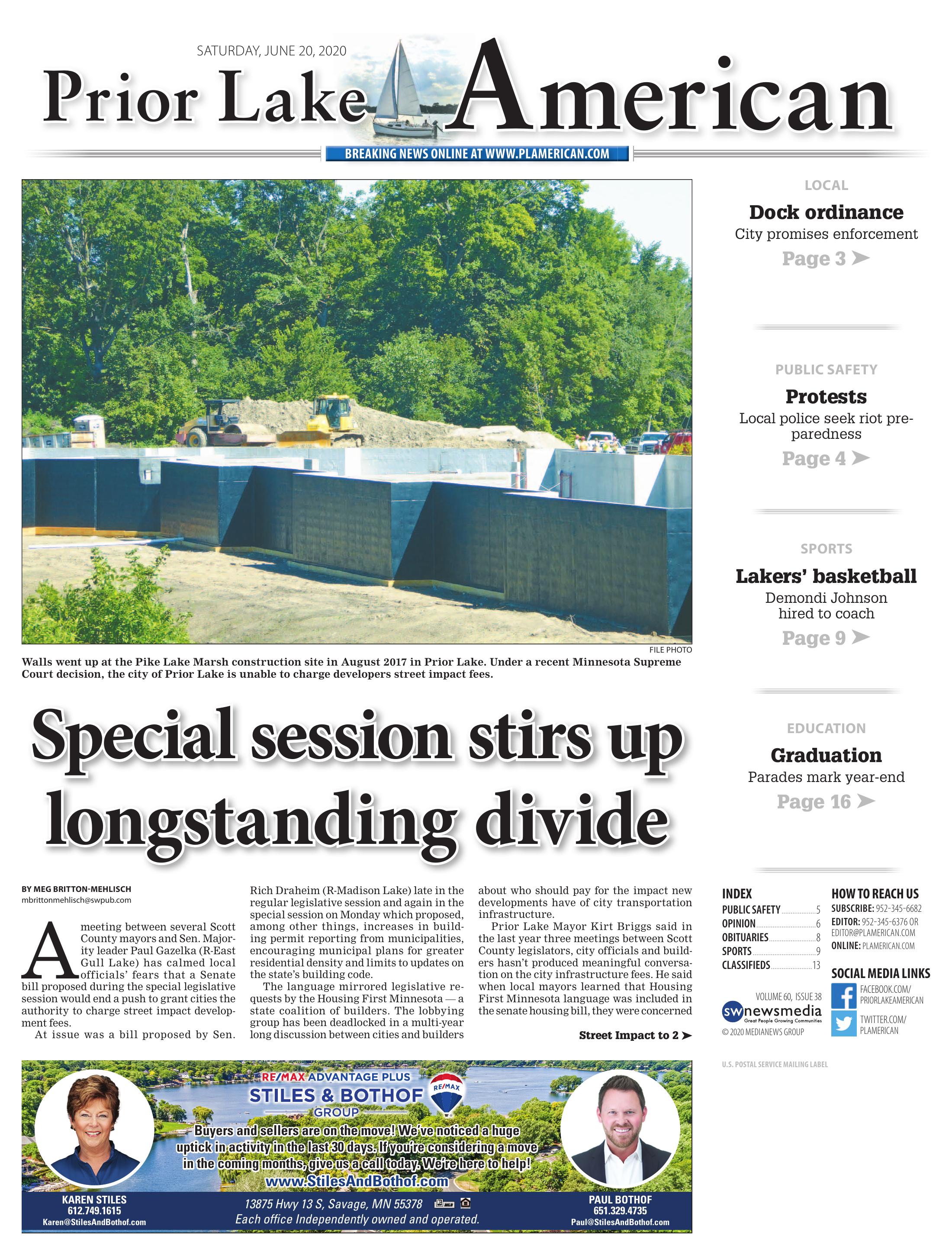