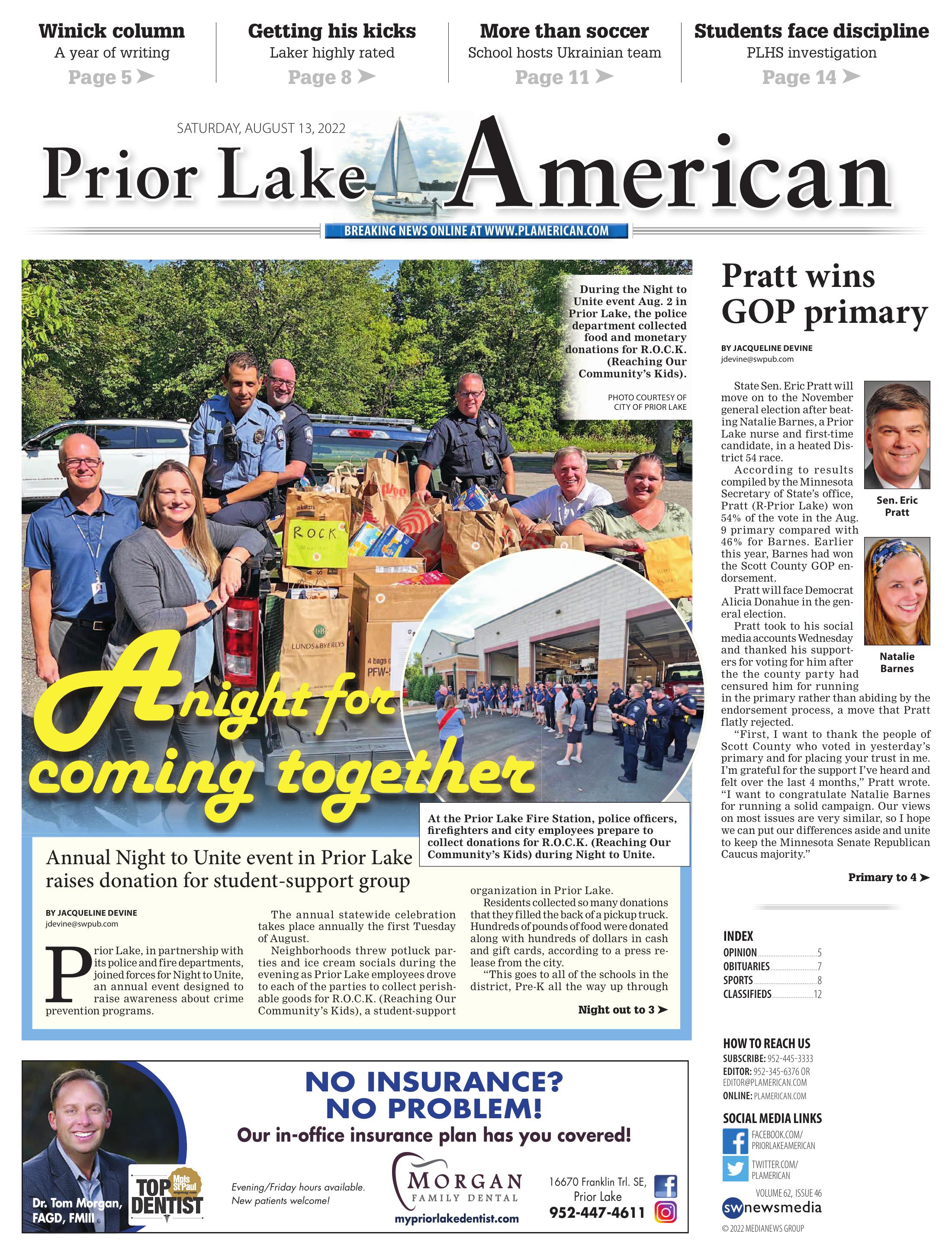 During the Night to Unite event Aug. 2 in Prior Lake, the police department collected food and monetary donations for R.O.C.K. (Reaching Our Community’s Kids).

At the Prior Lake Fire Station, police officers, firefighters and city employees prepare to collect donations for R.O.C.K. (Reaching Our Community’s Kids) during Night to Unite.

Photos courtesy of City of Prior Lake

Prior Lake Mayor Kirt Briggs takes a selfie with community members who collected donations for R.O.C.K. (Reaching Our Community’s Kids) during Night to Unite.

Prior Lake Police Chief Steve Frazer stands with residents who collected donations for R.O.C.K. (Reaching Our Community’s Kids) during Night to Unite

A Prior Lake police officer stands with residents who collected donations for R.O.C.K. (Reaching Our Community’s Kids) during Night to Unite.

Prior Lake, in partnership with its police and fire departments, joined forces for Night to Unite, an annual event designed to raise awareness about crime prevention programs.

Neighborhoods threw potluck parties and ice cream socials during the evening as Prior Lake employees drove to each of the parties to collect perishable goods for R.O.C.K. (Reaching Our Community’s Kids), a student-support organization in Prior Lake.

Residents collected so many donations that they filled the back of a pickup truck. Hundreds of pounds of food were donated along with hundreds of dollars in cash and gift cards, according to a press release from the city.

“This goes to all of the schools in the district, Pre-K all the way up through high school,” R.O.C.K. President Keri Thayer said in the release. “Each child takes their own food home every weekend.”

The list of items ranged from individual snacks to EZ Mac, granola bars, fruit cups and small cans of vegetables.

Thayer said the items they received could last the organization through November. “We couldn’t do this without the support of the community,” she said. “The donations of food are great. The monetary donations help, it all helps.”

Mayor Kirt Briggs said this year’s Night to Unite event was the biggest one yet.

“It’s really about thanking you. This was the biggest year yet and at next year’s Night to Unite, let’s make it two trucks,” he said.

State Sen. Eric Pratt will move on to the November general election after beating Natalie Barnes, a Prior Lake nurse and first-time candidate, in a heated District 54 race.

According to results compiled by the Minnesota Secretary of State’s office, Pratt (R-Prior Lake) won 54% of the vote in the Aug. 9 primary compared with 46% for Barnes. Earlier this year, Barnes had won the Scott County GOP endorsement.

Pratt will face Democrat Alicia Donahue in the general election.

Pratt took to his social media accounts Wednesday and thanked his supporters for voting for him after the the county party had censured him for running in the primary rather than abiding by the endorsement process, a move that Pratt flatly rejected.

“First, I want to thank the people of Scott County who voted in yesterday’s primary and for placing your trust in me. I’m grateful for the support I’ve heard and felt over the last 4 months,” Pratt wrote. “I want to congratulate Natalie Barnes for running a solid campaign. Our views on most issues are very similar, so I hope we can put our differences aside and unite to keep the Minnesota Senate Republican Caucus majority.”

He added: “I also recognize this is just the first leg of the race. We need to come together if we are to prevail in November. Minnesota families and small businesses are counting on us.”

Barnes also took to her social media accounts to thank her supporters and volunteers who helped her win the GOP endorsement.

“The establishment may have won this round but this is not just about winning, but about keeping people informed. I have so much to share. Politics is dirty. I played a fair race with integrity and honesty,” Barnes wrote. “I hope every single supporter of mine keeps the fire to the flame and accountability is required to serve in any office. After seeing the inside of the political machine, it’s hard for anyone with principles, morals and values to maintain them in positions of power.”

Barnes also showed support for Rep. Erik Mortensen (R-Shakopee), who got 55 percent of the vote in beating former legislator and Shakopee businessman Bob Loonan in House District 54A.

“I have so much more respect for those that do maintain their values and fight daily for freedom,” she stated. “Congratulations to Erik Mortensen for winning his primary and I pray you win in November.”