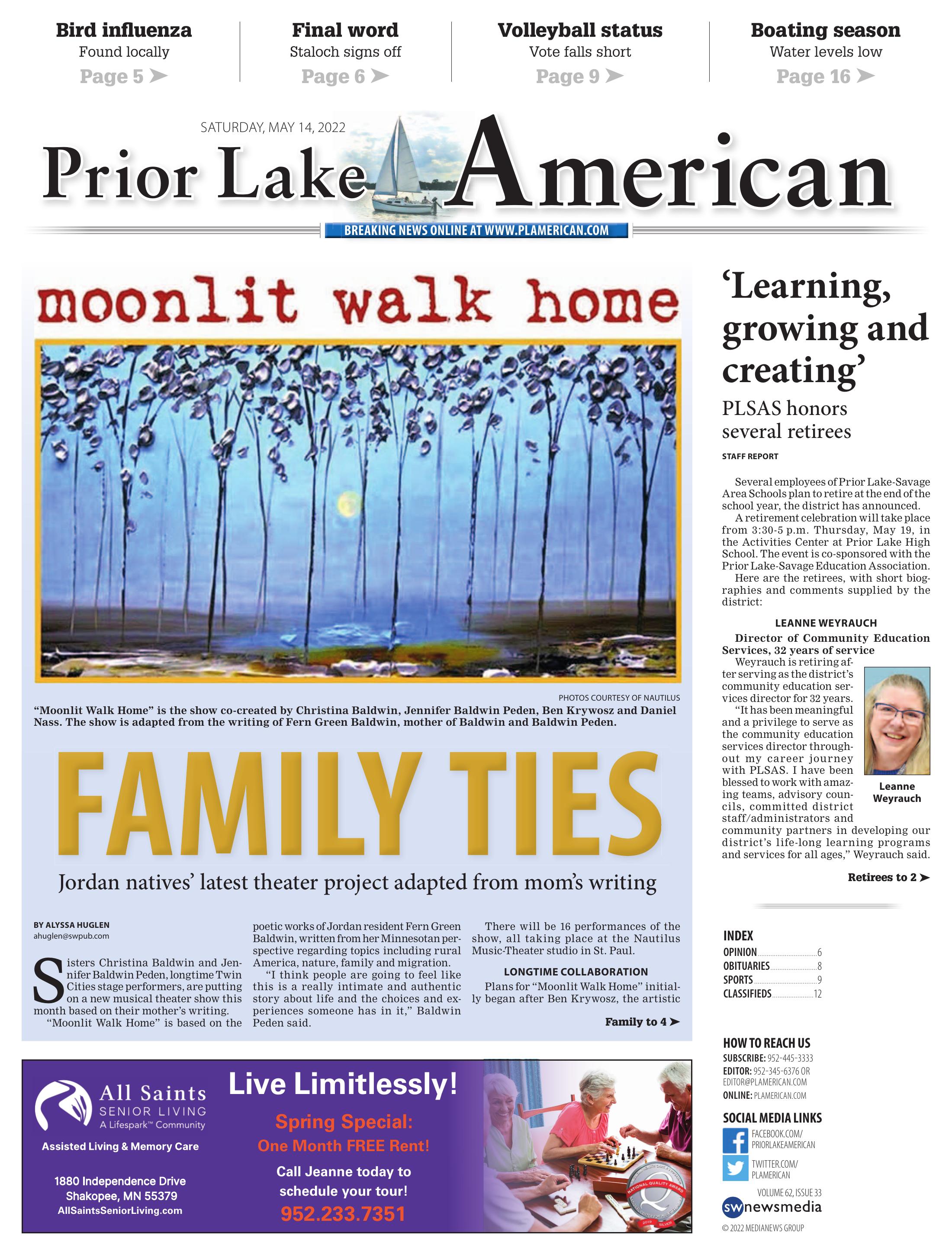 “Moonlit Walk Home” is the show co-created by Christina Baldwin, Jennifer Baldwin Peden, Ben Krywosz and Daniel Nass. The show is adapted from the writing of Fern Green Baldwin, mother of Baldwin and Baldwin Peden.

Photo courtesy of the Baldwin family

The Baldwin family has grown up in Jordan. Pictured are Christina (left) and Jennifer (right) in the wagon along with their six brothers circa 1976.

“Moonlit Walk Home” is based on the poetic works of Jordan resident Fern Green Baldwin, written from her Minnesotan perspective regarding topics including rural America, nature, family and migration.

“I think people are going to feel like this is a really intimate and authentic story about life and the choices and experiences someone has in it,” Baldwin Peden said.

There will be 16 performances of the show, all taking place at the Nautilus Music-Theater studio in St. Paul.

The Baldwin family has close ties with Krywosz as the sisters have collaborated with him for about twenty years on other projects.

Baldwin Peden said Krywosz was taken by a lot of the imagery and insight in the writing and realized it could offer a perspective on stage that might be different from what people in the city normally witness.

“There isn’t a plot or a narrative — it’s much more of a poetic portrait of this woman and the various incidents and observations that she’s made and converted into poetic writing. We were then able to take and turn it into songs,” Krywosz said.

Krywosz chose composer Daniel Nass to join the production. Baldwin and Baldwin Peden will be acting and singing on stage, and musicians will add instrumentals to the performance through piano, violin and more.

Nass and the sisters took a mindful approach in adapting Green Baldwin’s writing to songs. The group took poems and writing pieces from “Moonlit Walk Home” and made slight alterations to them so they could fit musically. Baldwin Peden said during this process, it was really important to be respectful of her mom’s word choices and the points she was making in her writing.

While Baldwin and Baldwin Peden have worked in performing arts for decades, assembling this production of “Moonlit Walk Home” was an entirely new experience because of the personal content.

“Every once in a while, I’ll have a moment where I just stop and realize … that we’re having all this dramaturgy around our mom,” Baldwin said.

The personal connection also made it easier for the sisters to adapt Green Baldwin’s writing while staying true to her messages.

“I think it helps that we know her so well because the voice and the ideas put forward are really specific — it’s her voice. Since we know her so well, we were sometimes able to say, ‘Oh, I think we’re veering off course with this.’ This is exactly how we respect some of her philosophies, the ideas she has about life and living in the country,” Baldwin Peden said.

Green Baldwin’s story also has personal ties to the Jordan community. She and her husband moved to Jordan in the late 1960s, where they still live. The sisters also grew up in Jordan.

Baldwin said her mom’s wisdom and reverence for nature are deeply rooted in the town and her surroundings.

Krywosz added to this, saying the production highlights Green Baldwin’s life in Jordan. Specific themes will resonate with audience members while also demonstrating a particular significance to Green Baldwin and her family.

“It’s been fun for us to make this connection between those hyper-local things with a larger, more universal view of life elsewhere,” he said.

Gearing up for the performances — which are scheduled throughout May — Baldwin and Baldwin Peden shared their excitement in learning more about their mom’s views on life and sharing those with audiences in a creative, musical format.

“We’ve had this kind of studied scrutiny on someone that we know and love so much,” Baldwin said. “It’s also just been a great gift to look at these poems and learn a little bit more about your own mother.”

All performances are held at the Nautilus Music-Theater studio, 308 Prince Street #190 in St. Paul.

Tickets are sold on a sliding scale, ranging from $10-$40, and can be purchased online at tix.gobo.show/moonlit.

For questions or further information, email staff@nautilusmusictheater.org or leave a message at 651-298-9913.