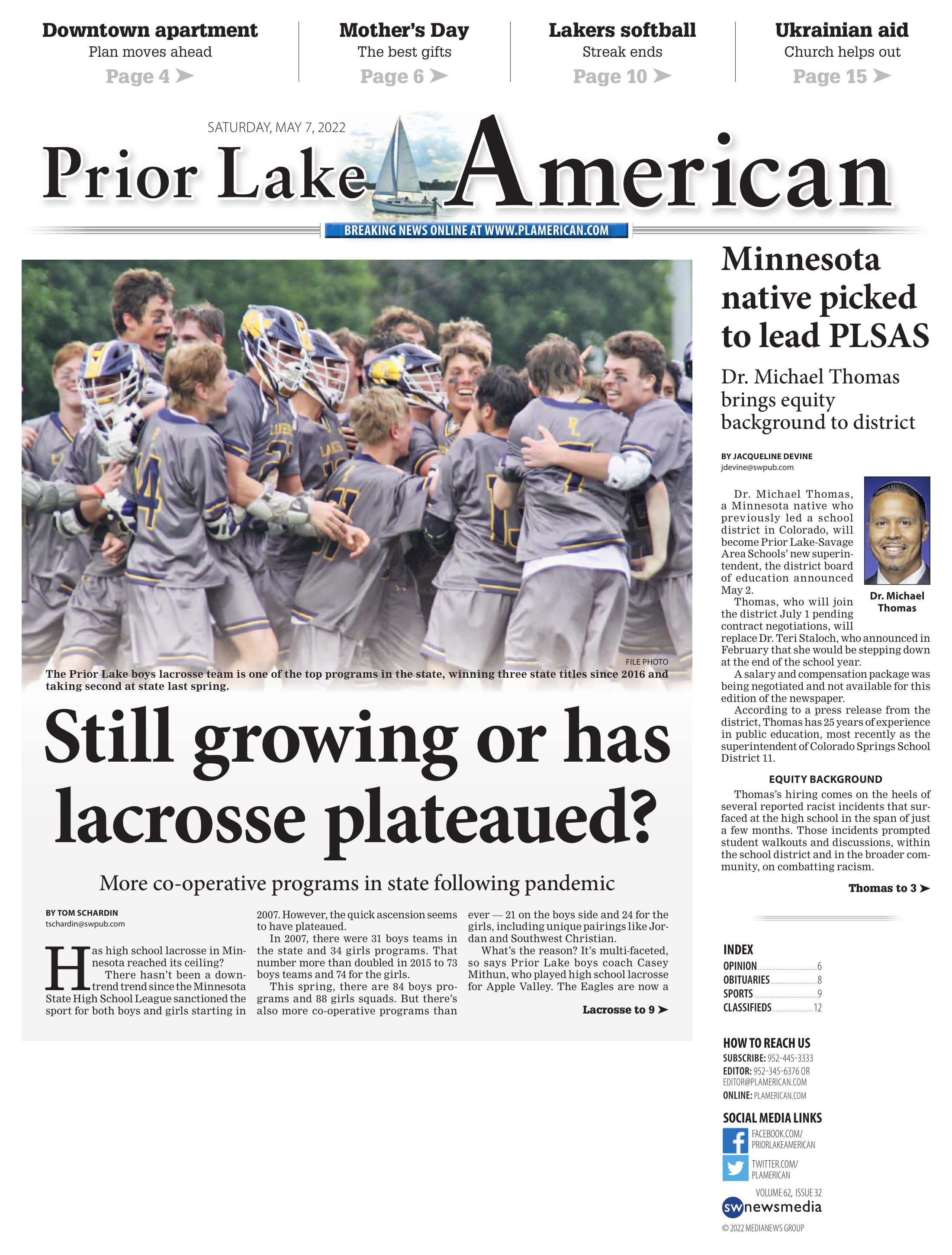 Sports
top story
Lacrosse
State of lacrosse: Is the sport still growing or has it plateaued?
More co-operative programs in the state following the pandemic
Tom Schardin / File photo

The Prior Lake boys lacrosse team is one of the top programs in the state, winning three state titles since 2016 and taking second at state last spring.

The Chanhassen girls lacrosse program is emerging as one the state’s best, but the Storm is still seeking its first-ever state berth.

Has high school lacrosse in Minnesota reached its ceiling?

There hasn't been a downtrend trend since the Minnesota State High School League sanctioned the sport for both boys and girls starting in 2007. However, the quick ascension seems to have plateaued.

This spring, there are 84 boys programs and 88 girls squads. But there's also more co-operative programs than ever — 21 on the boys side and 24 for the girls, including unique pairings like Jordan and Southwest Christian.

What's the reason? It's multi-faceted, so says Prior Lake boys coach Casey Mithun, who played high school lacrosse for Apple Valley. The Eagles are now a co-operative program with city-rival Eastview, while the Apple Valley girls are in their second season as a co-op with Burnsville.

"When it comes to programs themselves, yes, some are co-opping, while others are adding and growing," Mithun said. "I see part of it being affected by home buying geographically. I see families moving into new developments and cities, instead of in established cities. While some of Dakota County is co-opping, Apple Valley and Burnsville, for example, other cities like Waconia, Mound Westonka and New Prague are becoming new programs.

"I grew up in the Apple Valley/Burnsville area," Mithun said. "My parents and most of my friends' parents still own their houses. New households of kids haven't cycled back into those areas fully yet. Once they do, I think you'll see a resurgence in those programs."

Other reasons that may have stalled lacrosse growth for some high school programs include:

In Prior Lake, both programs are two of the better ones in the state. The Laker girls have won the last two state titles. The boys have won three state crowns since 2016 and were state runners-up last year.

But Prior Lake is a booming, affluent area. The school is third in the state in enrollment, according to the MSHSL.

"I've had a couple kids join other spring sports instead of playing lacrosse," Mithun said. "While I lose them as a lacrosse player, I'm glad they are investing their time in something they are passionate about.

"Lacrosse restrictions from COVID-19 opened new doors for activities like trap shooting and fishing that are now team sports at Prior Lake," Mithun added. "I also saw a lot of casual lacrosse players stop playing through COVID. Most associations didn't operate much during (the pandemic), while for-profit club programs pushed on.

Mithun is not an advocate of year-round lacrosse. He prefers his players play multi-sports. "I've personally seen kids quit from specializing in lacrosse, and burning out," he said.

Lacrosse at the MSHSL level is still one class. Soccer has 11 players on the field per team, while lacrosse has 10. Yet, there are three classes in soccer with 204 total boys teams and 195 girls squads.

There are fewer boys sports in the fall competing against soccer — just football and cross country. On the girls side, there's cross country, tennis and volleyball.

One difference between soccer and lacrosse is cost. Soccer is not overly expensive, while the cost can start to add up in lacrosse.

"Lacrosse isn't as expensive as hockey, but it's not cheap to get into, either," Mithun said. "It's more cost effective to start when you're younger, as the padding and equipment does not need to be as extensive. Once the level of play and size of the players increases, the padding needs to be more substantial, which is often more expensive."

Mithun is also the boys youth director for Prior Lake Athletics for Youth. He said there's a rental program for players to help with the cost of lacrosse.

"The program has been huge for breaking the financial barrier to get kids to join and continue playing lacrosse," Mithun said. "For about half the cost of buying the gear up front, you can rent a full set of gear, and then buy it at the end if you'd like. While this takes some upfront cost, and a dedicated person in the association to operate it, it ends up paying for itself with the rental costs."

Meanwhile, both Chanhassen lacrosse programs have been on the rise in recent years. The Storm boys won the Section 2 title last year, earning the program's first-ever state berth.

Chanhassen girls coach Rachel Panner credits the C3 Youth Lacrosse Association for the rise in her program. C3 governs youth lacrosse for both Chanhassen and Chaska, and Panner said it does a great job promoting the sport and providing opportunities for young players.

"Our youth board is dedicated to growing the sport for both high schools and they work extremely hard to retain numbers each year," Panner said "They do skills and training sessions all over the community to make sure everyone is aware of the program and what we are offering. They also work closely with me and the Chaska coach to make sure we are involved every step of the way."

Panner said losing the 2020 season hurt all programs, especially at the lower high school levels. Some of the those teams had to be cut last spring due to lower numbers.

"Not only did the pandemic hurt the high school level teams, but it trickled down to our youth levels as well," Panner said. "The spring/summer season is when the youth programs play, and most of those seasons were cancelled or shortened during the pandemic.​

"So when the 2021 season rolled around, all areas had taken a hit and numbers were low across the board," Panner added. "Therefore co-ops had to happen and lower levels went away."

Dr. Michael Thomas, a Minnesota native who previously led a school district in Colorado, will become Prior Lake-Savage Area Schools' new superintendent, the district board of education announced May 2.

Thomas, who will join the district July 1 pending contract negotiations, will replace Dr. Teri Staloch, who announced in February that she would be stepping down at the end of the school year.

A salary and compensation package was being negotiated and not available for this edition of the newspaper.

According to a press release from the district, Thomas has 25 years of experience in public education, most recently as the superintendent of Colorado Springs School District 11.

Thomas's hiring comes on the heels of several reported racist incidents that surfaced at the high school in the span of just a few months. Those incidents prompted student walkouts and discussions, within the school district and in the broader community, on combatting racism.

Thomas, who served as an equity/integration coordinator for Fair Oaks Elementary School in Osseo, told the newspaper that he was excited to start his new journey as superintendent of PLSAS in his home state of Minnesota.

"With my personal connections to the district and having many friends that live in the area, I am absolutely thrilled and honored to be chosen as the next superintendent," he said. "Dr. Staloch and her team have done an amazing job laying a strong foundation on which I intend to build upon.

Thomas said his background as an educator and equity/integration coordinator has prepared him well for his new opportunity and he looks forward to working with the community.

"I love to engage and collaborate with the community to affect positive change and do what we know is best for students," Thomas said. "I know we will have our share of challenges as well as success. It will take all of us to work hand-in-hand for the betterment of our community. I'm excited to move back home and prepare to make the formal transition into the superintendency."

The cities of Prior Lake, Savage and Credit River, along with Spring Lake Township, recently announced their joint support of Thomas' hiring.

"I look forward to welcoming Dr. Michael Thomas to Prior Lake and I am confident he will do a wonderful job serving our community's children," Prior Lake Mayor Kirt Briggs said. "The school board took the time it needed to put a comprehensive process in place and collect stakeholder input in order to find the best candidate to lead the district."

Savage Mayor Janet Williams said the community will be well-served by Thomas' experience and leadership.

“As our city and student population continues to grow, I am pleased to see a continuance of strong leadership at the helm of Prior Lake-Savage Area Schools and a unanimous decision made by the School Board,” Kostik said.

Lisa Quinn, Spring Lake Township Supervisor, added that she was also pleased with the board's decision "not only because (Thomas) is a strong instructional leader, but also someone who is known to be a relationship builder. Our community is fortunate to have him."