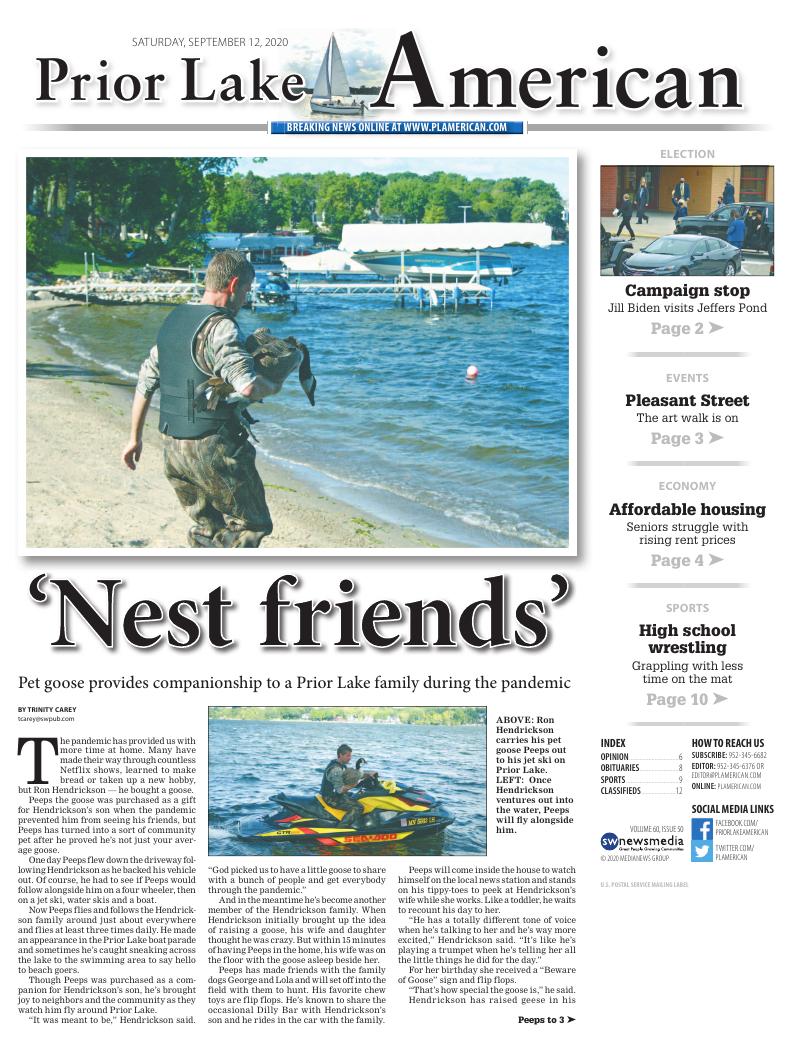 News
Meet Peeps: The goose providing companionship to a Prior Lake family during the pandemic
By Trinity Carey tcarey@swpub.com

Ron Hendrickson holds Peeps the goose in the Dairy Queen tub he sits in while riding in the car. Peeps is four and a half months old.

Peeps flies alongside Ron Hendrickson as he jet skis across Prior Lake. Peeps honks at Ron along the way to warn him that there are eagles circling above them as he always on the lookout for predators.

Peeps sits on the four wheeler after flying alongside of it.

Peeps follows Ron Hendrickson down to the lakefront to prepare for his morning fly alongside Ron as he jet skis. Peeps flies next to Ron as he water skis, drives his four wheeler and truck.

Peeps relaxes in the water after his first flight of the day. Peeps likes to chew on flip flops and munch on the occasional Dairy Queen Dilly Bar.

The pandemic has provided us with more time at home. Many have made their way through countless Netflix shows, learned to make bread or taken up a new hobby, but Ron Hendrickson — he bought a goose.

Peeps the goose was purchased as a gift for Hendrickson's son when the pandemic prevented him from seeing his friends, but Peeps has turned into a sort of community pet after he proved he’s not just your average goose.

One day Peeps flew down the driveway following Hendrickson as he backed his vehicle out. Of course, he had to see if Peeps would follow alongside him on a four wheeler, then on a jet ski, water skis and a boat.

Now Peeps flies and follows the Hendrickson family around just about everywhere and flies at least three times daily. He made an appearance in the Prior Lake boat parade and sometimes he’s caught sneaking across the lake to the swimming area to say hello to beach goers.

Though Peeps was purchased as a companion for Hendrickson’s son, he’s brought joy to neighbors and the community as they watch him fly around Prior Lake.

“It was meant to be,” Hendrickson said. “God picked us to have a little goose to share with a bunch of people and get everybody through the pandemic.”

And in the meantime he’s become another member of the Hendrickson family. When Hendrickson initially brought up the idea of raising a goose, his wife and daughter thought he was crazy. But within 15 minutes of having Peeps in the home, his wife was on the floor with the goose asleep beside her.

Peeps has made friends with the family dogs George and Lola and will set off into the field with them to hunt. His favorite chew toys are flip flops. He’s known to share the occasional Dilly Bar with Hendrickson’s son and he rides in the car with the family. 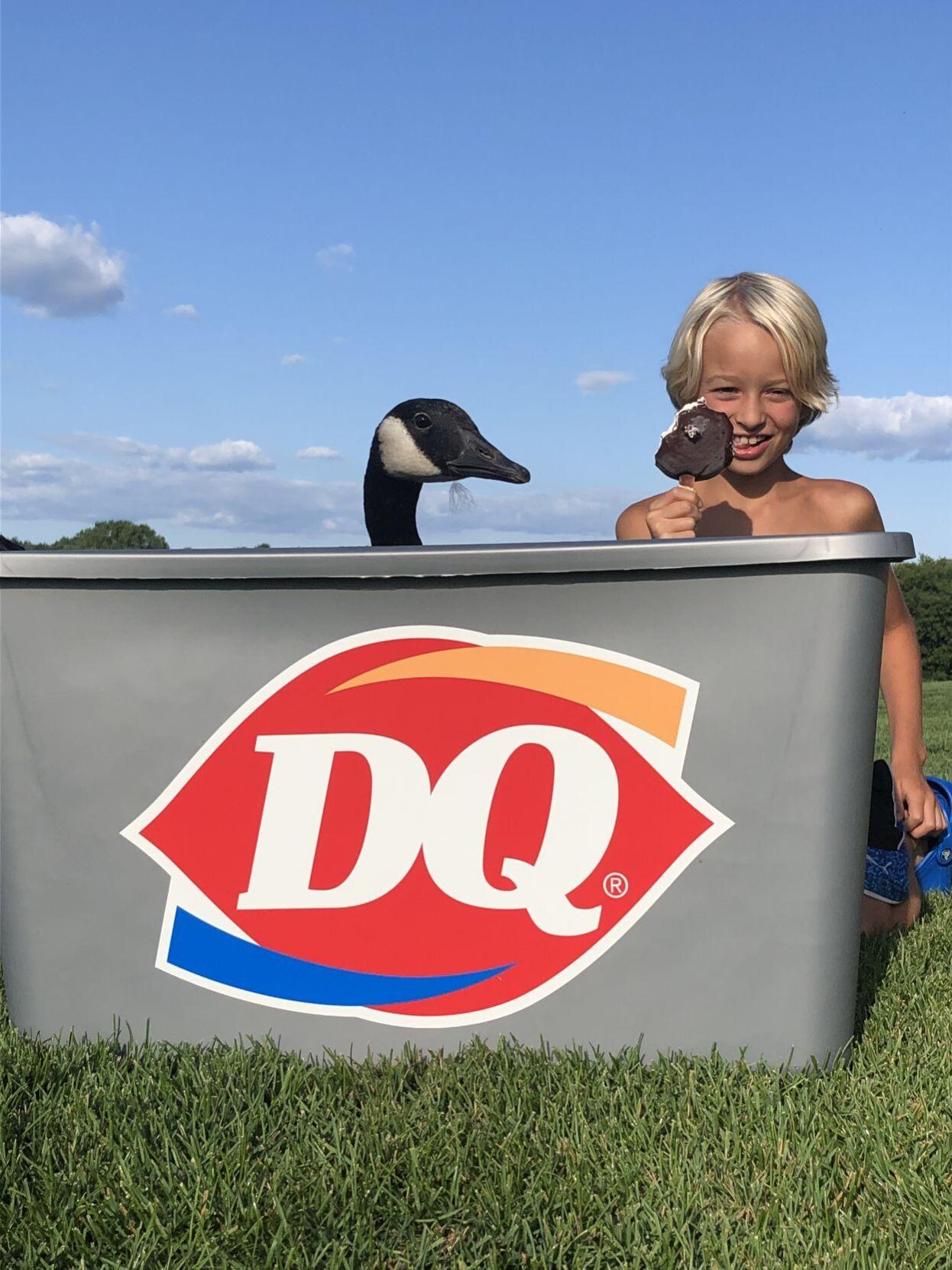 Landen Hendrickson shares a Dilly Bar with Peeps, the goose's favorite snack. Ron Hendricksen bought the goose for his son as a companion during the pandemic, but he's now loved by the entire family and many community members.

Peeps will come inside the house to watch himself on the local news station and stands on his tippy-toes to peek at Hendrickson’s wife while she works. Like a toddler, he waits to recount his day to her.

“He has a totally different tone of voice when he's talking to her and he’s way more excited," Hendrickson said. "It's like he's playing a trumpet when he's telling her all the little things he did for the day.”

For her birthday she received a “Beware of Goose” sign and flip flops.

“That’s how special the goose is,” he said.

Hendrickson has raised geese in his home before, even hatched 70 goslings in his childhood bedroom, but none of them have ever been quite like Peeps, he said.

“We saved the geese years ago back in 1991 and now a goose kind of saved me from going crazy because my Dairy Queen in the Mall of America was closed for three months and the sales are down 80%. It’s terrible, terrible, and this goose, it was for my little kid to stay sane and it turned into keeping the whole family sane,” Hendrickson said.

Peeps moved into a shed in the backyard of their home and hangs out in a pond Hendrickson made in honor of his friend Travis Pineur who passed away in 2019. Many have suggested that maybe Peeps embodies the spirit of Pineur and he came back to spend time in the pond he made for him, Hendrickson said.

The pond stands as a memorial for Pineur and provides a habitat for ducks and geese who continue to lose space for refuge.

“We’re the ones intruding on their space,” Hendrickson said.

He builds wooden duck houses and plants trees on his land to help the waterfowl he’s so fond of. 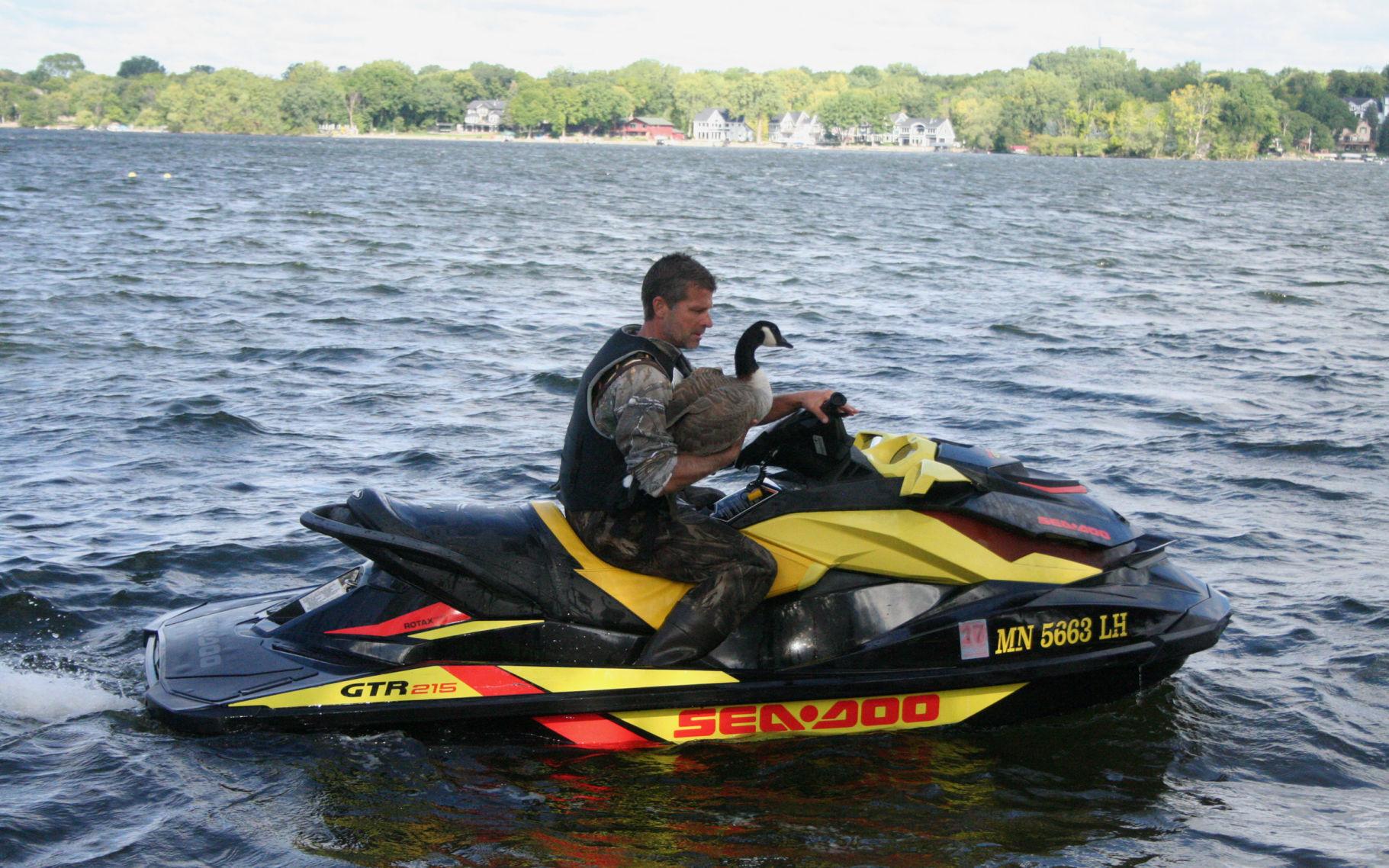 ABOVE: Ron Hendrickson carries his pet goose Peeps out to his jet ski on Prior Lake.

LEFT: Once Hendrickson ventures out into the water, Peeps will fly alongside him.

He sees this fierce protectiveness in Peeps when they fly around the lake and he gives a special honk to Hendrickson to warn him there are eagles circling above and when he thinks he’s defending the family from the fawn that enters their yard.

While Peeps is sure he’s the one looking out for the Hendricksons, their goal is to keep him safe and share the happiness their silly goose has brought to them with the rest of the community, especially during current times. 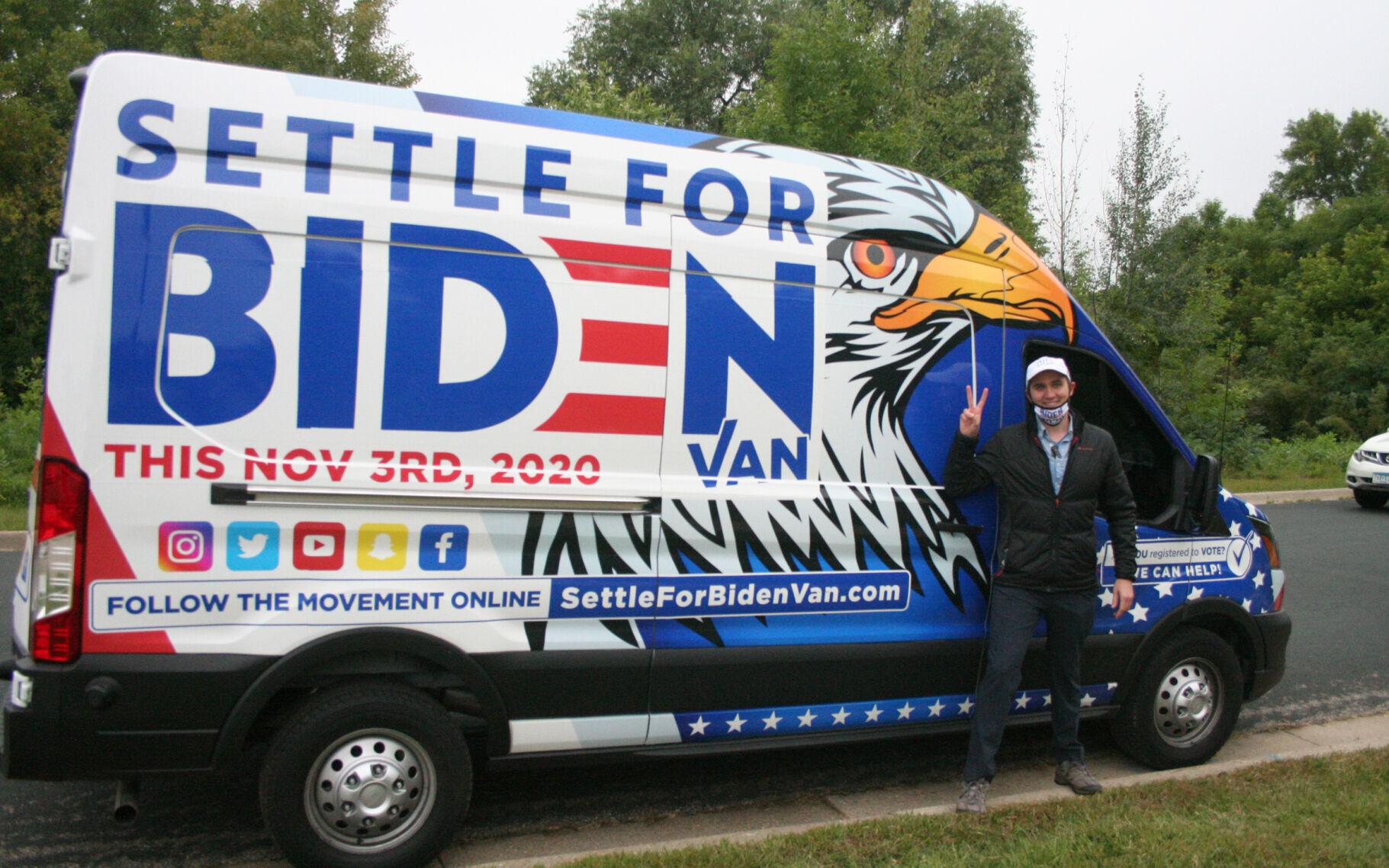 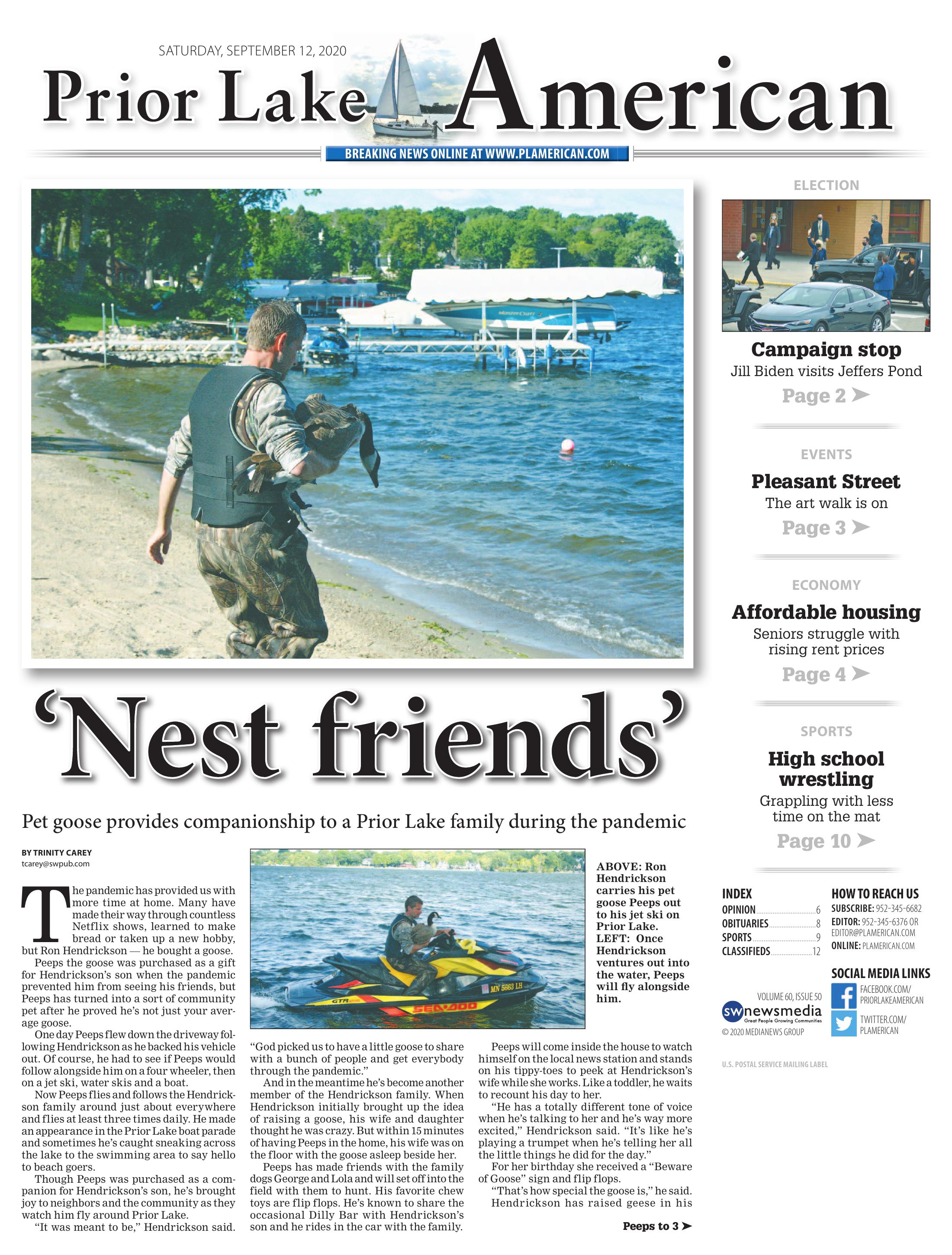