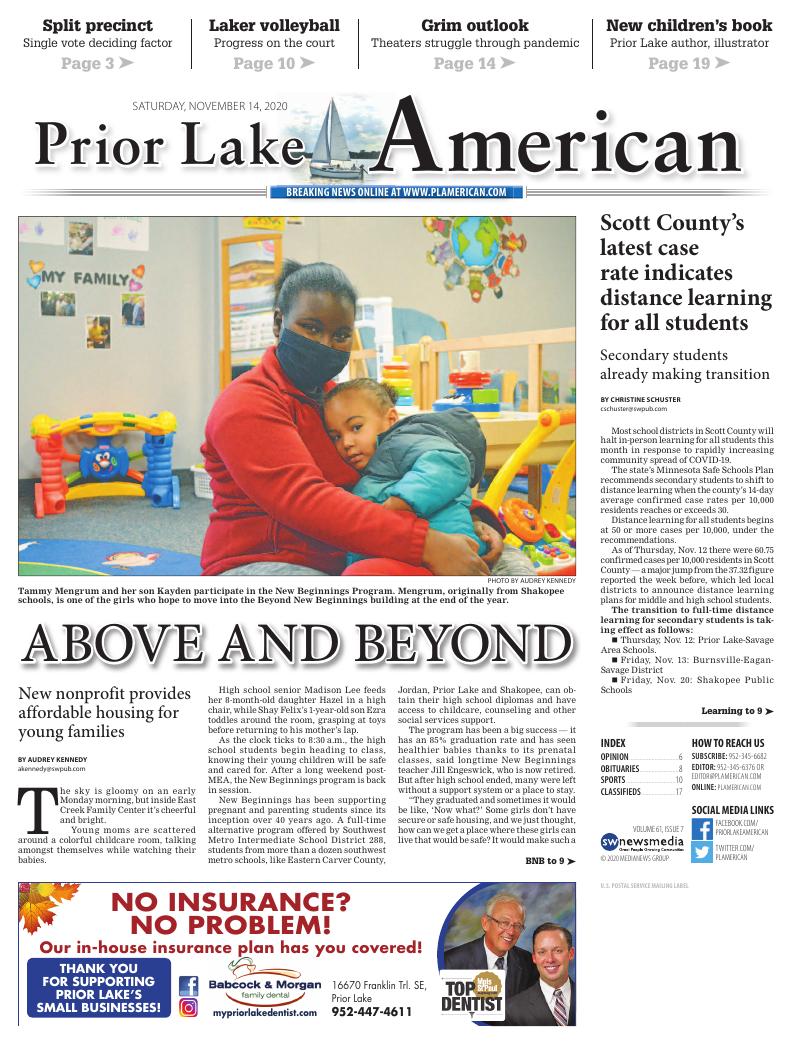 Tammy Mengrum and her son Kayden participate in the New Beginnings Program. Mengrum, originally from Shakopee schools, is one of the girls who hope to move into the Beyond New Beginnings building at the end of the year.

The sky is gloomy on an early Monday morning, but inside East Creek Family Center it’s cheerful and bright.

Young moms are scattered around a colorful childcare room, talking amongst themselves while watching their babies.

High school senior Madison Lee feeds her 8-month-old daughter Hazel in a high chair, while Shay Felix’s 1-year-old son Ezra toddles around the room, grasping at toys before returning to his mother’s lap.

As the clock ticks to 8:30 a.m., the high school students begin heading to class, knowing their young children will be safe and cared for. After a long weekend post-MEA, the New Beginnings program is back in session.

New Beginnings has been supporting pregnant and parenting students since its inception over 40 years ago. A full-time alternative program offered by Southwest Metro Intermediate School District 288, students from more than a dozen southwest metro schools, like Eastern Carver County, Jordan, Prior Lake and Shakopee, can obtain their high school diplomas and have access to childcare, counseling and other social services support.

The program has been a big success — it has an 85% graduation rate and has seen healthier babies thanks to its prenatal classes, said longtime New Beginnings teacher Jill Engeswick, who is now retired. But after high school ended, many were left without a support system or a place to stay.

“They graduated and sometimes it would be like, ‘Now what?’ Some girls don’t have secure or safe housing, and we just thought, how can we get a place where these girls can live that would be safe? It would make such a difference,” Engeswick said.

Enter “Beyond New Beginnings,” a new nonprofit organization dedicated to supporting young families by providing safe, secure housing and programming for those currently enrolled or graduated from New Beginnings.

The brainchild of Engeswick, longtime New Beginnings teacher Sue Schmidt and active community service member Russell St John, Beyond New Beginnings is the natural next step to help young families get support while pursuing their education, personal and professional goals — like senior Tammy Mengrum, who will most likely live in the housing with her 2-year-old son Kayden.

“I’m really excited. I can finally have my own place,” she said.

If all goes according to schedule, four young families will move into a Chaska apartment building by Christmas.

“Think about when you graduated from high school. Were you ready to face the whole world? When you have a child on your hip?” said Schmidt. “We need to continue that support so they continue to be successful, getting their feet on the ground and making those steps forward.”

While the idea for Beyond New Beginnings had been in Schmidt’s mind for a while, it wasn’t until she spoke at a Rotary Club meeting benefiting New Beginnings that the program started to get off the ground.

St John was in attendance when Schmidt mentioned returning to ask for support for housing young moms. Schmidt’s ideas stuck with him, and by June 2019, St John, Schmidt and Engeswick were making tentative plans for a building for young families.

While St John may not have on-the-ground experience like his co-founders, he knew fundraising, strategic planning and hundreds of community members that might be able to help, he said.

Originally, the three wanted to build or refurbish their own building that would house 8-12 young families. Once St John started sharing their ideas, support poured in from the community, local government, foundations, builders, architects — it just snowballed from there, Schmidt said.

Beyond New Beginnings is a nonprofit and unaffiliated with the school district and its programming, and the three originally expected their plans to build housing would take three to five years.

But by the summer 2020, they had secured a four-unit building in downtown Chaska thanks to a partnership with the Carver County Community Development Agency. While they haven’t held any major fundraising events, St John said Beyond New Beginnings has already received many inquiries and several substantial donations.

“All these different organizations that support the program, support the girls and their endeavors, want to see them be successful. That’s what this is about — let’s give them another leg up. Let’s help them move forward. And be the best parent they can be,” said Schmidt.

Housing candidates must be enrolled in or graduated from New Beginnings and have at least 50% custody of their child. They have to be in school full time, working full time or working toward their own personal goals. They also will pay 30% of their income toward rent.

CCCDA will manage the leases and maintain the property, but is otherwise unaffiliated with the program.

But it’s not just about the apartments — the program also provides services similar to the New Beginnings courses. Parents will meet twice a month with their mentor and participate in empowerment classes, life skills and parenting curriculum to prepare them for true independence.

“This isn’t a shelter, or a transitional home. They have to commit to being there for a year, no longer than two years, and commit to the program. They need to be making a better future for themselves, and we’ll support them through it all,” said Engeswick.

Part of the building will be a place to gather with their neighbors, friends and mentors. Thanks to Engeswick and students lobbying the State Legislature last year, they now have free transportation to and from the New Beginnings facility — and can bring their kids on the bus.

When COVID-19 restrictions began, “everything that could go wrong, did go wrong,” said Engeswick. Some students don’t have reliable internet or a source of childcare while attempting to do online school, so they lost some of their students, Sue added.

But now, many of the 12 girls in the New Beginnings program are physically in school. Their toddlers are playing in the bright and colorful childcare rooms. Girls like Felix can plan on their future at Normandale Community College, knowing that they have reliable options for secure housing.

“What’s more important than our young members of society who have been pushed to the side? As a community, we love and care for them. We want to help get them to a better place,” St John said.

Most school districts in Scott County will halt in-person learning for all students this month in response to rapidly increasing community spread of COVID-19.

Distance learning for all students begins at 50 or more cases per 10,000, under the recommendations.

As of Thursday, Nov. 12 there were 60.75 confirmed cases per 10,000 residents in Scott County — a major jump from the 37.32 figure reported the week before, which led local districts to announce distance learning plans for middle and high school students.

The transition to full-time distance learning for secondary students is taking effect as follows:

Full details regarding the timeline and decision-making process can be found on each district's website.

On Nov. 12, the Prior Lake-Savage district reported 55 student cases and 14 staff cases had been confirmed in the past seven days.

The district also reports more than 730 students and staff are currently in quarantine.

The Minnesota Department of Health lists school buildings that've reported five or more confirmed cases in students or staff who were in the building while infectious during a two-week reporting period.

On Thursday, Nov. 5 Prior Lake High School became the first school in Scott County to be named on the report, and it remained so with the latest update published Nov. 12. Secondary schools within the Prior Lake-Savage Area School District began transitioning to distance learning on Nov. 12. An update to primary schools learning plans was not announced before press time.

As of Nov. 9, the Shakopee district reported a running total of 111 confirmed cases among district staff and students with 28 newly cases being confirmed over the past week. Shakopee Public Schools announced earlier this week its elementary schools would shift to distance learning on Nov. 30.

In Jordan, the hybrid model will continue for now.

As of Nov. 12, the Jordan district reported 18 student infections and seven staff member infections have been confirmed since Aug. 30, and 245 cumulative quarantines have been observed since that time.

Eight of the confirmed infections — six among students and two among staff — were reported the week of Nov. 2-8. 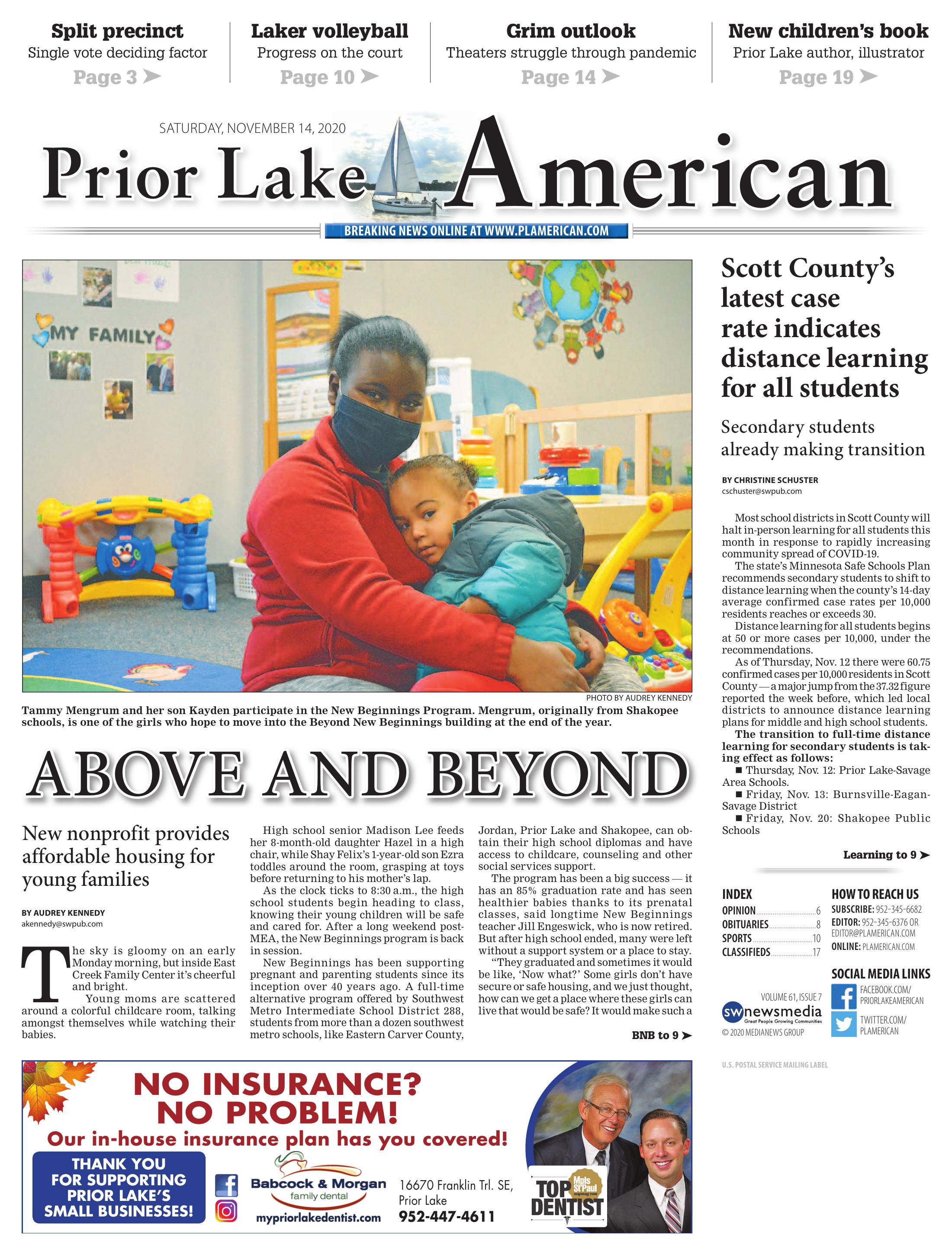