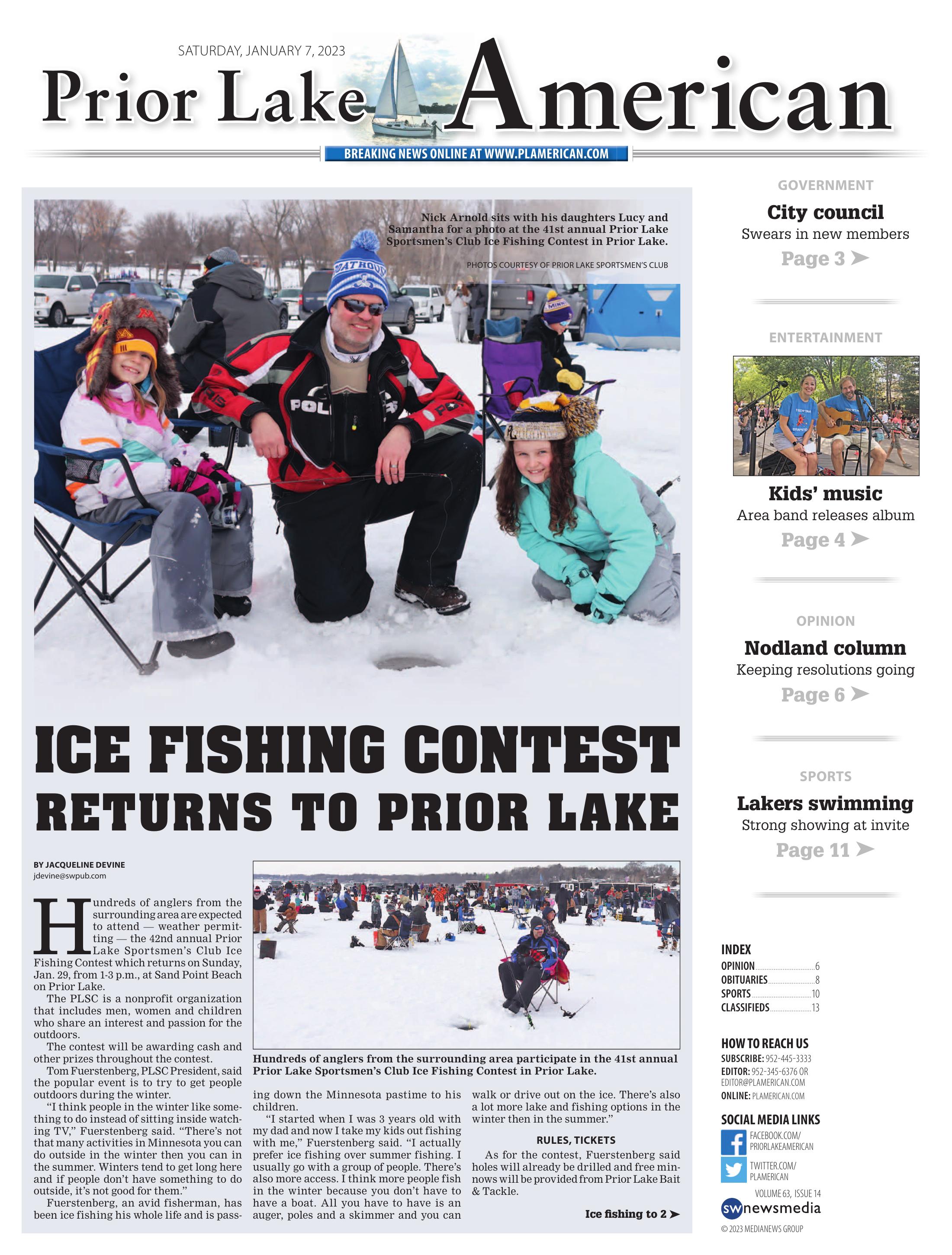 Nick Arnold sits with his daughters Lucy and Samantha for a photo at the 41st annual Prior Lake Sportsmen’s Club Ice Fishing Contest in Prior Lake.

Hundreds of anglers from the surrounding area participate in the 41st annual Prior Lake Sportsmen’s Club Ice Fishing Contest in Prior Lake.

Tyler Rabenberg, 15, of Princeton, speaks to another angler about his ice fishing device. Rabenberg and his brother decided to attend the 41st annual Prior Lake Sportsmen’s Club Ice Fishing Contest after participating in a tournament on Elk Lake.

Nancy Hemmah watches over an ice fishing hole with her granddaughter, Beverly, at the 41st annual Prior Lake Sportsmen’s Club Ice Fishing Contest in Prior Lake.

Hundreds of anglers from the surrounding area are expected to attend — weather permitting — the 42nd annual Prior Lake Sportsmen’s Club Ice Fishing Contest which returns on Sunday, Jan. 29, from 1-3 p.m., at Sand Point Beach on Prior Lake.

The PLSC is a nonprofit organization that includes men, women and children who share an interest and passion for the outdoors.

The contest will be awarding cash and other prizes throughout the contest.

Tom Fuerstenberg, PLSC President, said the popular event is to try to get people outdoors during the winter.

Fuerstenberg, an avid fisherman, has been ice fishing his whole life and is passing down the Minnesota pastime to his children.

“I started when I was 3 years old with my dad and now I take my kids out fishing with me,” Fuerstenberg said. “I actually prefer ice fishing over summer fishing. I usually go with a group of people. There’s also more access. I think more people fish in the winter because you don’t have to have a boat. All you have to have is an auger, poles and a skimmer and you can walk or drive out on the ice. There’s also a lot more lake and fishing options in the winter then in the summer.”

Rules, ticketsAs for the contest, Fuerstenberg said holes will already be drilled and free minnows will be provided from Prior Lake Bait & Tackle.

“There is a circle that you have to fish within, and you cannot fish in ice houses,” Fuerstenberg said. “The holes will be pre-drilled, and we will be providing crappie minnows. All people need to come with is their own fishing pole, and it’s probably not a bad idea to have an ice skimmer in case ice builds up in your hole.”

Tickets are $1 and available for purchase the day of the event. The contest will take place on the north end public access of Prior Lake (Sand Point Beach) just south of County Road 42 and 18 intersection. In addition, lunch and refreshments will be sold on the lake.

“Proceeds go to benefit the Prior Lake Sportsmen’s Club, which we use for firearms safety courses and different things throughout the community,” Fuerstenberg said. “We just hope people come out and have fun to support a good cause and have a good time.” 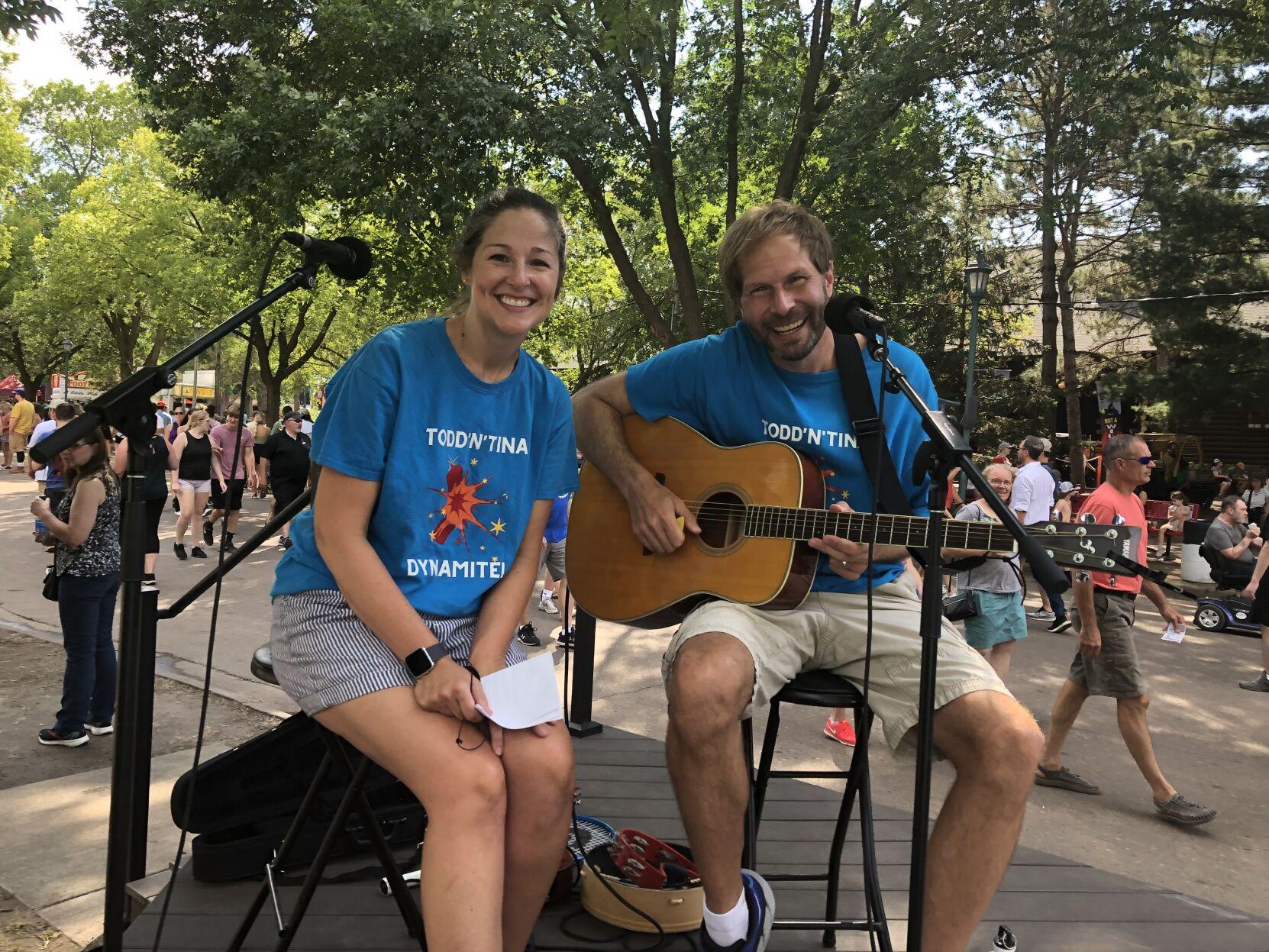 Krissy Mondelli (left) and Todd Millenacker performed on the Star Tribune stage at the Minnesota State Fair in 2022.