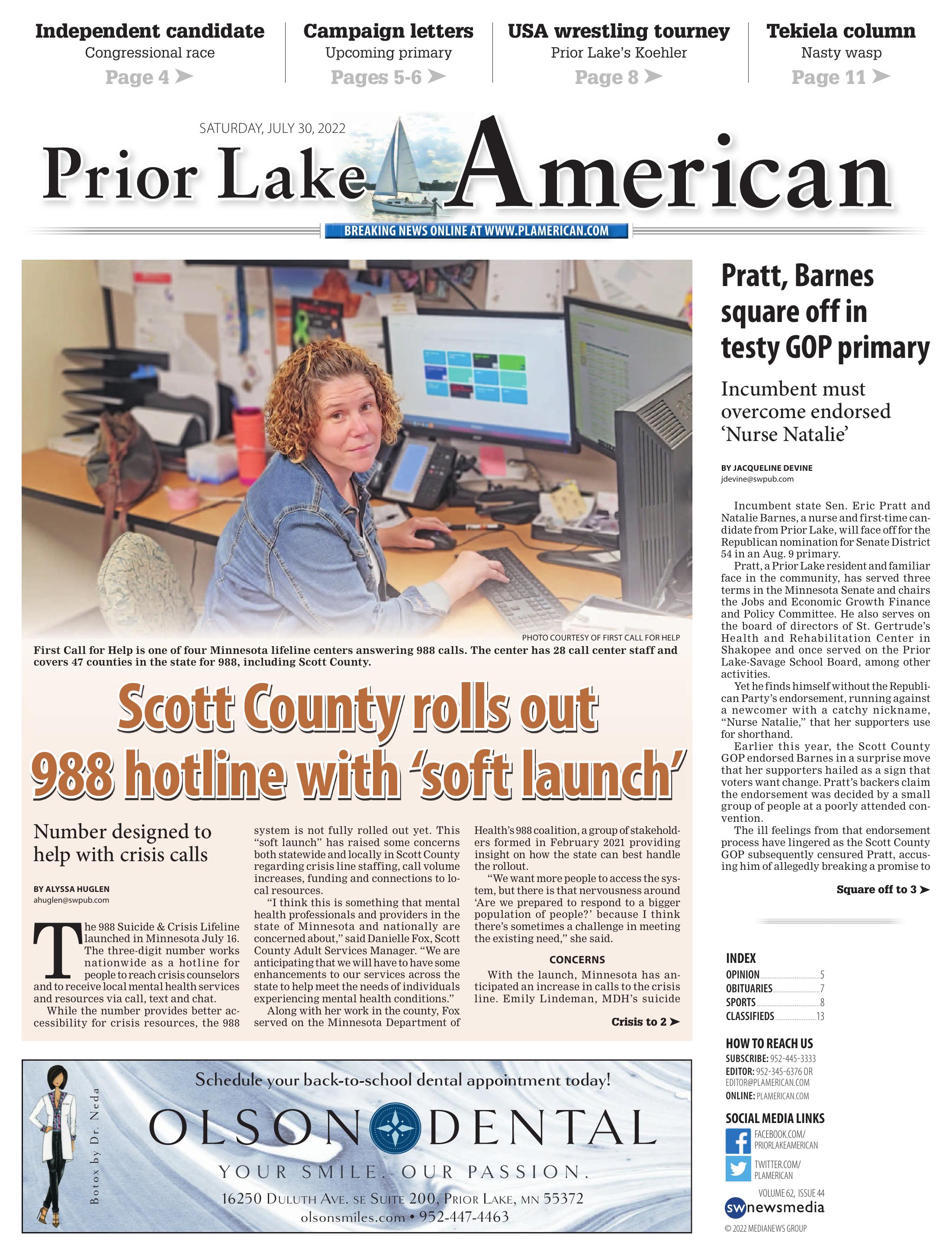 The 988 Suicide & Crisis Lifeline launched in Minnesota July 16. The three-digit number works nationwide as a hotline for people to reach crisis counselors and to receive local mental health services and resources via call, text and chat.

While the number provides better accessibility for crisis resources, the 988 system is not fully rolled out yet. This “soft launch” has raised some concerns both statewide and locally in Scott County regarding crisis line staffing, call volume increases, funding and connections to local resources.

“I think this is something that mental health professionals and providers in the state of Minnesota and nationally are concerned about,” said Danielle Fox, Scott County Adult Services Manager. “We are anticipating that we will have to have some enhancements to our services across the state to help meet the needs of individuals experiencing mental health conditions.”

Along with her work in the county, Fox served on the Minnesota Department of Health’s 988 coalition, a group of stakeholders formed in February 2021 providing insight on how the state can best handle the rollout.

“We want more people to access the system, but there is that nervousness around ‘Are we prepared to respond to a bigger population of people?’ because I think there’s sometimes a challenge in meeting the existing need,” she said.

With the launch, Minnesota has anticipated an increase in calls to the crisis line. Emily Lindeman, MDH’s suicide prevention coordinator, said this is expected as more people throughout the state become aware of the number.

This uptick in calls has already been seen at First Call for Help, one of the four Minnesota lifeline centers responding to 988 calls. This lifeline center is the one Scott County residents get connected to if they call 988.

Executive Director Cre Larson said 988 calls to First Call for Help have already doubled from June to July. The center receives between 4,700-5,200 total calls a month, and she expects this number to noticeably increase due to the 988 launch.

Lindeman said her department has heard from other lifeline centers that they, too, have seen an increase in calls since the rollout began.

To handle the increase, Lindeman said the state is looking to make sure lifeline centers are staffed and readily equipped.

First Call for Help currently covers 47 counties in Minnesota for 988 calls and works as backup to the other three lifeline centers. The center is also locally contracted with 37 counties for crisis lines and dispatching mobile crisis resources.

Larson said her call center staff currently consists of 28 members. Staffed 24 hours a day, she said day and afternoon shifts typically have about seven or eight people on call, while overnight shifts are typically run by three people.

The call center is staffed adequately right now, according to Larson, saying she feels the center is prepared to handle the increase in calls. First Call for Help is preparing to add 12 trained staff members to handle texts and chats by September.

Scott County stated in a July 15 press release, “Unlike the 911 emergency line (which is locally operated), until the 988 system is fully rolled out, callers may not be immediately connected to local resources.”

When calls cannot connect to the local lifeline center, they may be rerouted to a different lifeline center in Minnesota or a national backup center.

“The Minnesota Department of Health would like to minimize those nationally answered calls as much as possible,” Fox said. “They want to make sure that Minnesota people are answering Minnesota calls so that they can dispatch Minnesota resources when appropriate.”

MDH reported that the in-state answer rate from January to May of this year was 76% for calls, 0% for chats and 0% for texts. There is a target goal of 90% for each communication method, but Lindeman said it is hard to predict when the lifeline centers could hit that benchmark.

Scott County recommends residents contact local resources directly if they are concerned about not being immediately connected.

Funding concerns have also come up among the 988 coalition. MDH received $1.3 million in state funding and $922,000 in federal funding to use for 988 in FY23, but additional funding via an omnibus supplement budget bill did not pass this year.

It is projected that Minnesota will need $7.3 million to fully support lifeline center operations in the first year of the 988 transition.

“I think that funding was a good start, but it’s not the full amount of funding that it would take to do this project and do it well,” Fox said about the start-up funding.

Despite this setback, Lindeman said MDH is hopeful for future funding during the next legislative session.

According to MDH, the messaging goal is to begin small-scale public promotion of 988 in September and a broader, statewide promotion sometime next year.

“We know that the transition to 988 is really just the first step in a series of improvements and approaches to making connecting to mental health support more accessible for everyone, and we know that this won’t happen overnight,” Lindeman said.

In late June, Fox gave a presentation on 988 to the Scott County Mental Health Local Advisory Council, a group of local stakeholders helping to improve mental health services and providing recommendations to the Scott County Board on related issues.

Fox believes 988 can be a great resource for Scott County residents moving forward.

“988 in Scott County is a really great opportunity to provide that really easy connection point and raise awareness. The hope is also that it can be a reduction in stigma for accessing mental health or behavioral health services,” she said.

“I really do think that this is an exciting, wonderful opportunity, and there are going to be some challenges that we work through,” she added. “But it is really cool to see some national attention to mental health — we just can’t forget the value of that.”

Beyond calling 988, here are some local resources in Scott County that are readily available:

Incumbent state Sen. Eric Pratt and Natalie Barnes, a nurse and first-time candidate from Prior Lake, will face off for the Republican nomination for Senate District 54 in an Aug. 9 primary.

Pratt, a Prior Lake resident and familiar face in the community, has served three terms in the Minnesota Senate and chairs the Jobs and Economic Growth Finance and Policy Committee. He also serves on the board of directors of St. Gertrude’s Health and Rehabilitation Center in Shakopee and once served on the Prior Lake-Savage School Board, among other activities.

Yet he finds himself without the Republican Party’s endorsement, running against a newcomer with a catchy nickname, “Nurse Natalie,” that her supporters use for shorthand.

Earlier this year, the Scott County GOP endorsed Barnes in a surprise move that her supporters hailed as a sign that voters want change. Pratt’s backers claim the endorsement was decided by a small group of people at a poorly attended convention.

The ill feelings from that endorsement process have lingered as the Scott County GOP subsequently censured Pratt, accusing him of allegedly breaking a promise to abide by the endorsement process. A censure is a public rebuke or expression of disapproval.

In a news release, the party said Pratt “cavalierly dismissed” the will of the delegates and alternates at the convention by deciding to run in a primary.

Pratt rejected that in a news release response, arguing that primaries are “common in the political process” and that running in one does not warrant a censure. His campaign added: “Unfortunately, the Scott County GOP board would rather accuse a candidate of dividing the local party instead of promoting a political event that all constituents can participate in.”

The primary winner will face Democrat Alicia Donahue in the November general election.

Pratt, in phone a phone interview with the American, said he still has a lot to accomplish as senator, such as eliminating taxes on social security benefits for senior citizens, working with law enforcement agencies and bringing businesses back to Minnesota.

Rather than issuing rebate checks with the state surplus, as some lawmakers have advocated, he would rather provide tax breaks “for families and seniors that are struggling.”

Barnes first got a taste of politics when her oldest son was diagnosed with an autoimmune condition called PANDAS. She soon realized all of her children had the condition and quickly became an advocate for families who were seeking answers.

According to Barnes’ website, she championed a bill in the Legislature that required insurance coverage of treatments ordered by physicians for these children — a measure that later passed.

Barnes moved to Prior Lake 16 years ago to raise her four children with her husband. She said her goal, if elected, would be to reduce government taxation and regulation and get money back into taxpayers’ wallets.

Pratt said he can work across the aisle to get bills signed into law at a time of divided government. Some of his notable accomplishments, he said, include leading the effort to provide disaster relief to communities ravaged by floods in 2014 and the passage in 2017 of Real ID, which allows Minnesota driver’s licenses to be used to board airplanes and enter federal buildings.

He also said his years in banking allowed him to assemble advocates across the political spectrum and pass consumer protections for PACE home improvement financing. Also, he said, he led the charge on paying off Minnesota’s unemployment insurance debt, making sure that small businesses and their employees were not financially punished for being forced to close by the governor’s orders.

Pratt said he expects a tight election but said residents have been “extremely supportive” of him in the senate.

“I think I’m going to be the stronger candidate in November,” he said. “I think I have a track record of getting things done that my opponent doesn’t, and people realize that. So, we’re just running our race and I expect it to be close.”

Barnes welcomed the party’s endorsement, calling it “an honor and a benefit.”

She added: “My opponent has failed us by growing the size and scope of the government and delivering scraps to conservatives. I believe in limited government. I firmly believe that all elected officials ought to be public servants: accountable to the people.”