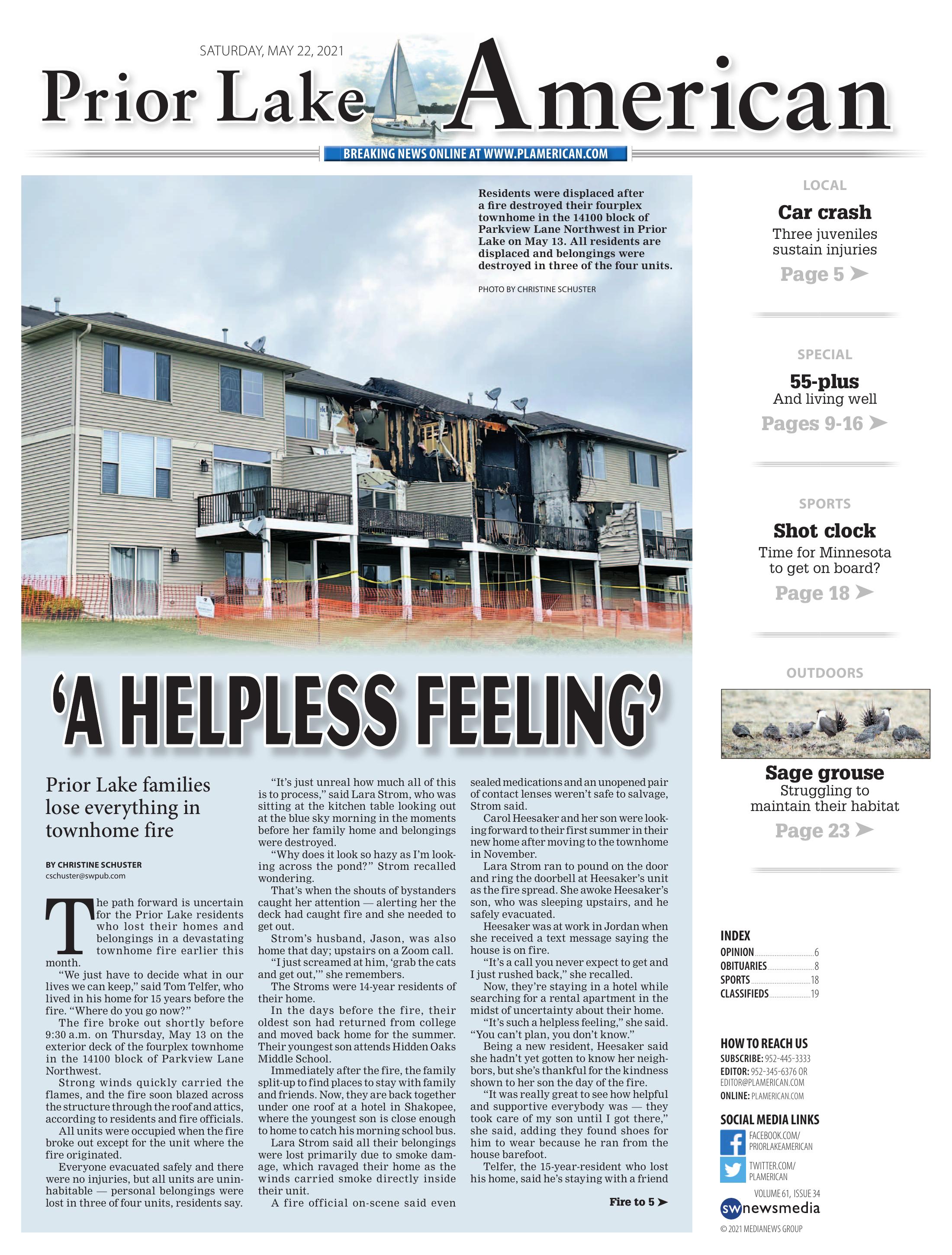 Residents were displaced after a fire destroyed their fourplex townhome in the 14100 block of Parkview Lane Northwest in Prior Lake on May 13. All residents are displaced and belongings were destroyed in three of the four units.

The path forward is uncertain for the Prior Lake residents who lost their homes and belongings in a devastating townhome fire earlier this month.

"We just have to decide what in our lives we can keep," said Tom Telfer, who lived in his home for 15 years before the fire. "Where do you go now?"

The fire broke out shortly before 9:30 a.m. on Thursday, May 13 on the exterior deck of the fourplex townhome in the 14100 block of Parkview Lane Northwest.

Strong winds quickly carried the flames, and the fire soon blazed across the structure through the roof and attics, according to residents and fire officials.

All units were occupied when the fire broke out except for the unit where the fire originated.

Everyone evacuated safely and there were no injuries, but all units are uninhabitable — personal belongings were lost in three of four units, residents say.

"It's just unreal how much all of this is to process," said Lara Strom, who was sitting at the kitchen table looking out at the blue sky morning in the moments before her family home and belongings were destroyed.

"Why does it look so hazy as I'm looking across the pond?" Strom recalled wondering.

That's when the shouts of bystanders caught her attention — alerting her the deck had caught fire and she needed to get out.

Strom's husband, Jason, was also home that day; upstairs on a Zoom call.

"I just screamed at him, 'grab the cats and get out,'" she remembers.

The Stroms were 14-year residents of their home.

In the days before the fire, their oldest son had returned from college and moved back home for the summer. Their youngest son attends Hidden Oaks Middle School.

Immediately after the fire, the family split-up to find places to stay with family and friends. Now, they are back together under one roof at a hotel in Shakopee, where the youngest son is close enough to home to catch his morning school bus.

Lara Strom said all their belongings were lost primarily due to smoke damage, which ravaged their home as the winds carried smoke directly inside their unit.

Carol Heesaker and her son were looking forward to their first summer in their new home after moving to the townhome in November.

Lara Strom ran to pound on the door and ring the doorbell at Heesaker's unit as the fire spread. She awoke Heesaker's son, who was sleeping upstairs, and he safely evacuated.

Heesaker was at work in Jordan when she received a text message saying the house is on fire.

"It's a call you never expect to get and I just rushed back," she recalled.

Now, they're staying in a hotel while searching for a rental apartment in the midst of uncertainty about their home.

Being a new resident, Heesaker said she hadn't yet gotten to know her neighbors, but she's thankful for the kindness shown to her son the day of the fire.

"It was really great to see how helpful and supportive everybody was — they took care of my son until I got there," she said, adding they found shoes for him to wear because he ran from the house barefoot.

Telfer, the 15-year-resident who lost his home, said he's staying with a friend during this time. When the fire took his home, his daughter, son-in-law and grandson had been staying with him. Now, all their belongings are lost to water damage and mold.

But despite all the losses, residents say they are thankful, above all, to be safe.

Even all the beloved pets survived the fire.

Witnesses credit the bravery of good Samaritans for heroically rescuing two dogs trapped inside the unit where the fire originated.

Several witnesses described how nearby landscaping workers with Magnolia Landscape & Design ran towards the smoke and flames, kicked-in the door and entered the smoke-filled townhome to save the dogs.

Lara Strom, who witnessed the rescue, said one worker made it out coughing, with smoke billowing off of him after running extremely close to the flames to rescue a puppy inside a kennel.

"I can't even believe it, I still have tears in my eye thinking about it," Keri Bedeaux, owner of Protecting Paws Animal Rescue, said on the day of the fire.

Bedeaux said the unit belonged to her closest friend, Ali Johnson, who wasn't home when the fire broke out; Johnson and her 9-year-old daughter lost all their belongings in the blaze.

The efforts of the landscaping workers saved the family's dog as well as S'mores, a 13-week-old foster puppy, Bedeaux said. Residents impacted by the fire say they're wading through the complexities of insurance coverage and still uncertain how the tragedy will impact their financial future.

The cause of the fire remains under investigation.

In the meantime, displaced residents are searching for housing solutions and rebuilding the necessities lost in the fire. It's estimated they'll be displaced for 9-12 months.

Several avenues are being created to raise community support for those impacted.

Here's some of the ways you can lend a hand: 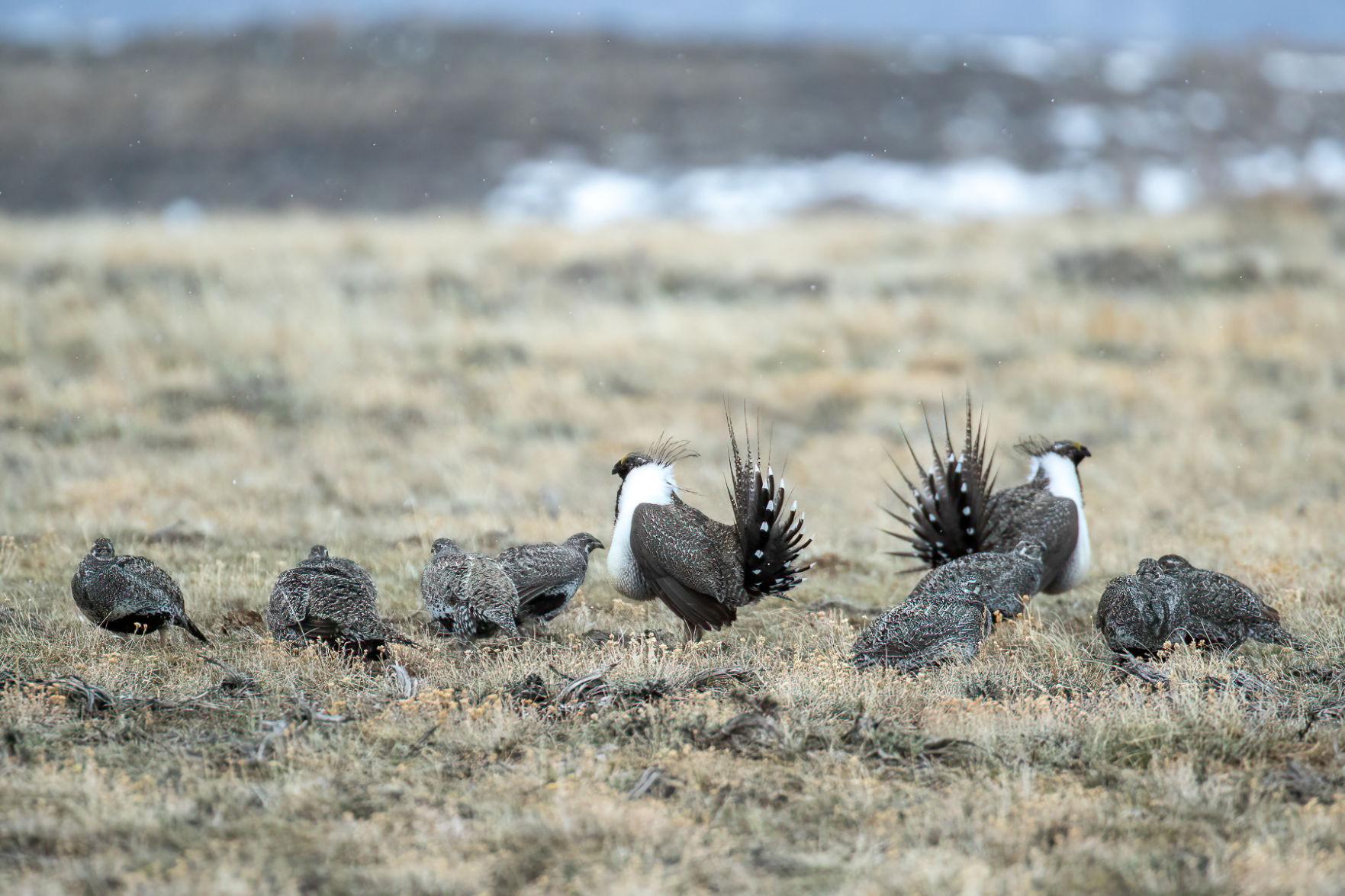 The sage grouse population is in steady decline. It was estimated that some 16 million sage grouse once lived across the high desert western states. Now, there could only be up to 400,000 left.