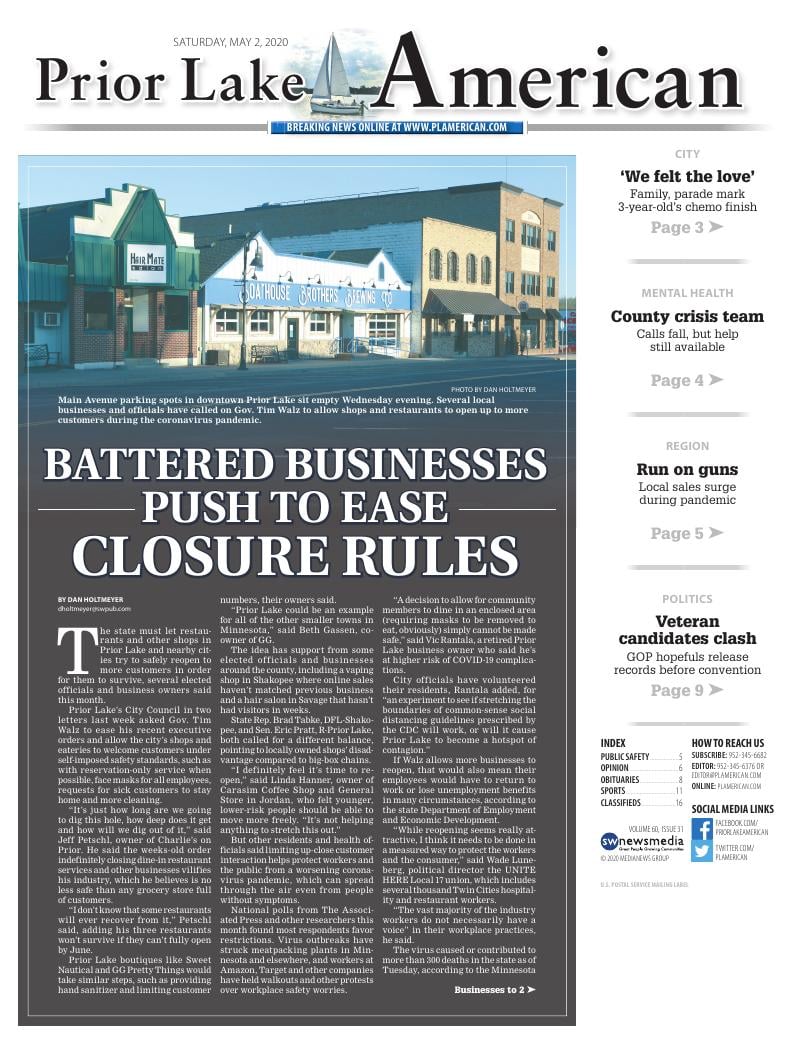 Main Avenue parking spots in downtown Prior Lake sit empty Wednesday evening. Several local businesses and officials have called on Gov. Tim Walz to allow shops and restaurants to open up to more customers during the coronavirus pandemic.

The state must let restaurants and other shops in Prior Lake and nearby cities try to safely reopen to more customers in order for them to survive, several elected officials and business owners said this month.

Prior Lake’s City Council in two letters last week asked Gov. Tim Walz to ease his recent executive orders and allow the city’s shops and eateries to welcome customers under self-imposed safety standards, such as with reservation-only service when possible, face masks for all employees, requests for sick customers to stay home and more cleaning.

“It’s just how long are we going to dig this hole, how deep does it get and how will we dig out of it,” said Jeff Petschl, owner of Charlie’s on Prior. He said the weeks-old order indefinitely closing dine-in restaurant services and other businesses vilifies his industry, which he believes is no less safe than any grocery store full of customers.

“I don’t know that some restaurants will ever recover from it,” Petschl said, adding his three restaurants won’t survive if they can’t fully open by June.

Prior Lake boutiques like Sweet Nautical and GG Pretty Things would take similar steps, such as providing hand sanitizer and limiting customer numbers, their owners said.

“Prior Lake could be an example for all of the other smaller towns in Minnesota,” said Beth Gassen, co-owner of GG.

The idea has support from some elected officials and businesses around the county, including a vaping shop in Shakopee where online sales haven’t matched previous business and a hair salon in Savage that hasn’t had visitors in weeks.

“I definitely feel it’s time to re-open,” said Linda Hanner, owner of Carasim Coffee Shop and General Store in Jordan, who felt younger, lower-risk people should be able to move more freely. “It’s not helping anything to stretch this out.”

But other residents and health officials said limiting up-close customer interaction helps protect workers and the public from a worsening coronavirus pandemic, which can spread through the air even from people without symptoms.

National polls from The Associated Press and other researchers this month found most respondents favor restrictions. Virus outbreaks have struck meatpacking plants in Minnesota and elsewhere, and workers at Amazon, Target and other companies have held walkouts and other protests over workplace safety worries.

“A decision to allow for community members to dine in an enclosed area (requiring masks to be removed to eat, obviously) simply cannot be made safe,” said Vic Rantala, a retired Prior Lake business owner who said he’s at higher risk of COVID-19 complications.

City officials have volunteered their residents, Rantala added, for “an experiment to see if stretching the boundaries of common-sense social distancing guidelines prescribed by the CDC will work, or will it cause Prior Lake to become a hotspot of contagion.”

If Walz allows more businesses to reopen, that would also mean their employees would have to return to work or lose unemployment benefits in many circumstances, according to the state Department of Employment and Economic Development.

“While reopening seems really attractive, I think it needs to be done in a measured way to protect the workers and the consumer,” said Wade Luneberg, political director the UNITE HERE Local 17 union, which includes several thousand Twin Cities hospitality and restaurant workers.

“The vast majority of the industry workers do not necessarily have a voice” in their workplace practices, he said.

The virus caused or contributed to more than 300 deaths in the state as of Tuesday, according to the Minnesota Department of Health. Victims have been as young as 30, though most were at least in their 70s.

Thousands more are known to have had the respiratory illness, which can range from unnoticeable or mild symptoms to severe difficulty breathing and sometimes fatal complications. It can spread through coughing or talking, according to the Centers for Disease Control and Prevention.

Walz responded to its arrival over the past two months with orders closing theaters and gyms and limiting other types of business while also asking Minnesotans to stay home as much as possible. Unemployment insurance and low-cost loans and other assistance for businesses also expanded at the state and federal level.

Walz has since eased or amended some of the rules. Golf courses and certain office and manufacturing jobs can resume, for example, as long as several precautions are taken.

On Thursday Walz announced retailers and other businesses could open to curbside pickup and deliveries under similar conditions. If that goes well and testing capabilities keep growing, opening shops to small numbers of customers could soon follow, he said in his daily briefing.

“We’re trying to continue to thread that needle,” Walz said.

Savage’s Oishii Japanese Ramen and Donburi restaurant and Prior Lake’s Edelweiss Bakery temporarily closed completely in March but reopened for to-go orders a few weeks later with the help of government loans and other assistance.

“We’re slowly getting back into it,” said Edelweiss co-owner Laurie Lin. The shop is open fewer days a week than before, all employees wear masks that Lin washes at home each day, and only three or four customers can come in at a time.

Business is at about half the normal level, but Lin said it’s working for now.

“We’re just looking to the experts to tell us when is it safe for people to be back together,” she said, adding she’s grateful for the customers who’ve come in. “It’s been invaluable to make sure we come out the other side.”

Other businesses have hit a brick wall. Vanity Hair Salon in Savage and others like it had to shut down. Its stylists are independent and self-employed, which until recently meant they weren’t eligible for unemployment insurance.

“It’s killing us, to be honest with you,” said Dawn Stier, Vanity Hair’s owner and one of its stylists. She said the salon needs to reopen, noting she still has to pay her landlord, but she also wanted guidelines in order to prepare for whatever form reopening eventually takes.

“We are all willing to do whatever is needed to allow us to open our doors,” Stier said; she and another stylist, Crystal Anderson, pointed to having clients wait outside for appointments, for example, and masks for everyone.

Those clients have begun to get their haircuts through other means, Stier said; one went to South Dakota for it. She envisioned an underground, speakeasy-style service industry popping up soon.

“We’re going to go back to Prohibition days if you don’t let us make an income,” Stier said with a laugh. “How is that going to help everybody?”

Geno Smith, who runs clothing company GBE Threads in Shakopee with his wife, said he understands that people want to be back at work but thinks it’s too early, even at the cost of his own business’ income. He’s been working as a cook for income but said they’ve been lucky, since they don’t have anyone else on payroll.

“This is a crucial time to just keep hunkering down and waiting this out,” Smith said. 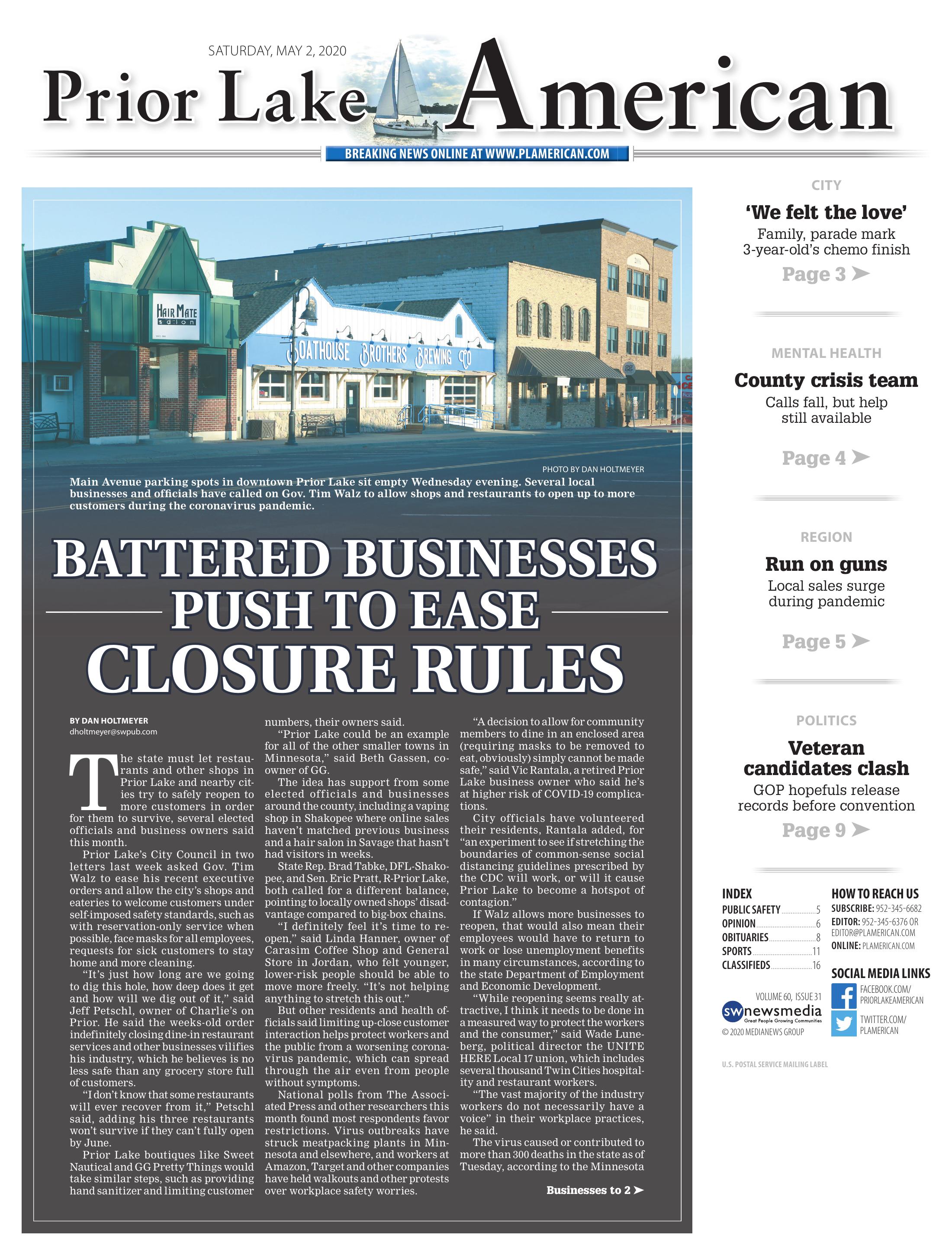