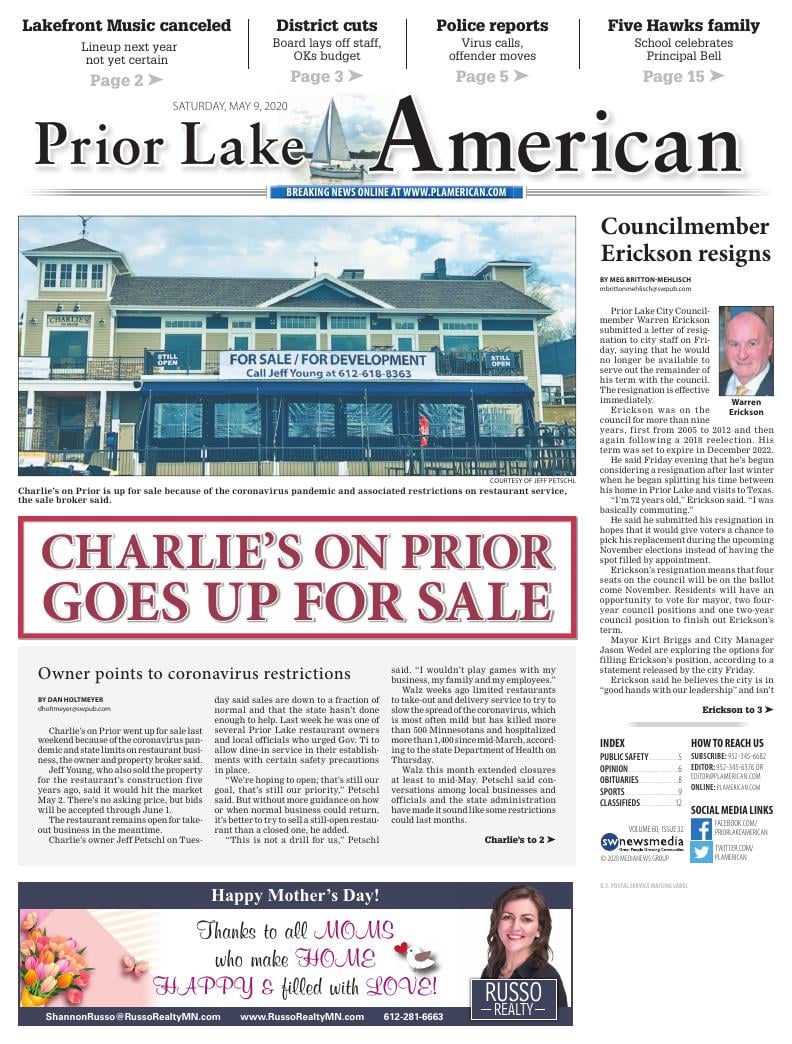 Charlie’s on Prior is up for sale because of the coronavirus pandemic and associated restrictions on restaurant service, the sale broker said.

Charlie’s on Prior went up for sale last weekend because of the coronavirus pandemic and state limits on restaurant business, the owner and property broker said.

Jeff Young, who also sold the property for the restaurant’s construction five years ago, said it would hit the market May 2. There’s no asking price, but bids will be accepted through June 1.

The restaurant remains open for takeout business in the meantime.

Charlie’s owner Jeff Petschl on Tuesday said sales are down to a fraction of normal and that the state hasn’t done enough to help. Last week he was one of several Prior Lake restaurant owners and local officials who urged Gov. Ti to allow dine-in service in their establishments with certain safety precautions in place.

“We’re hoping to open; that’s still our goal, that’s still our priority,” Petschl said. But without more guidance on how or when normal business could return, it’s better to try to sell a still-open restaurant than a closed one, he added.

“This is not a drill for us,” Petschl said. “I wouldn’t play games with my business, my family and my employees.”

Walz weeks ago limited restaurants to take-out and delivery service to try to slow the spread of the coronavirus, which is most often mild but has killed more than 500 Minnesotans and hospitalized more than 1,400 since mid-March, according to the state Department of Health on Thursday.

Walz this month extended closures at least to mid-May. Petschl said conversations among local businesses and officials and the state administration have made it sound like some restrictions could last months.

Petschl and other owners have told the state they’d take several steps, such as by requiring reservations, distancing tables and sanitizing more often if the restrictions eased. Petschl said he believes his restaurant would be as safe as any other open business with those steps.

Walz has dialed back some of his recent executive orders, such as by allowing elective health care procedures to resume and for local retailers to reopen with curbside pickup in recent days.

But he has repeatedly said the changes would be gradual rather than an off-on switch and that public health and the economy aren’t separate concerns. The goal in slowing the spread is protecting hospitals from being overwhelmed, which could mean less care for anyone hospitalized for any reason.

The virus often spreads through coughing, talking or even breathing near other people, according to the Centers for Disease Control and Prevention and other health officials.

“We’re trying to continue to thread that needle,” Walz said.

Petschl said fast-serve restaurants are doing all right under the limits — he also owns two Lago Tacos around the Twin Cities that aren’t for sale. Federal loans and payroll assistance have helped, but he didn’t want to dig deeper into debt without business coming in.

“This was a business decision,” he said.

This week the Scott County Board of Commissioners joined the call to allow Prior Lake businesses and restaurants who have created a “safe shop” plan to reopen for business.

The board sent a letter to Walz on Tuesday in support of the business plans and concern over the impact the shutdown was having on local livelihoods.

“But far beyond the financial implications, and in my humble opinion more importantly, are the emotional consequences that have been thrust upon these business owners and their families,” board Chairman David Beer wrote.

Beer said he felt it was time to respond to the pandemic in both a health-conscious and economically-conscious way at once.

Prior Lake Mayor Kirt Briggs called the shutdown an “economic death march” for Prior Lake businesses in meetings with the City Council and in an appearance before the Scott County Board of Commissioners this week. He said business owners deserve to know when the shutdown will end.

“In this fluid situation, there are some things that are not fluid,” Briggs told the board. “The virus is not an equitable, fair virus in who it impacts. Right now it is singling out our small businesses.”

Meg Britton-Mehlisch contributed to this report.

Prior Lake City Councilmember Warren Erickson submitted a letter of resignation to city staff on Friday, saying that he would no longer be available to serve out the remainder of his term with the council. The resignation is effective immediately.

Erickson was on the council for more than nine years, first from 2005 to 2012 and then again following a 2018 reelection. His term was set to expire in December 2022.

He said Friday evening that he’s begun considering a resignation after last winter when he began splitting his time between his home in Prior Lake and visits to Texas.

He said he submitted his resignation in hopes that it would give voters a chance to pick his replacement during the upcoming November elections instead of having the spot filled by appointment.

Mayor Kirt Briggs and City Manager Jason Wedel are exploring the options for filling Erickson’s position, according to a statement released by the city Friday.

Erickson said he believes the city is in “good hands with our leadership” and isn’t concerned about stepping down. He added that he’d like to thank the residents of Prior Lake for electing him three times but wants no fanfare or big goodbye.

Erickson in 2018 said his priorities would be to develop and grow in smart ways that fit with the community and environment. Late last year he opposed the idea of halting rezoning and development projects while the state’s cities are barred from charging fees for nearby roadwork and other needs. 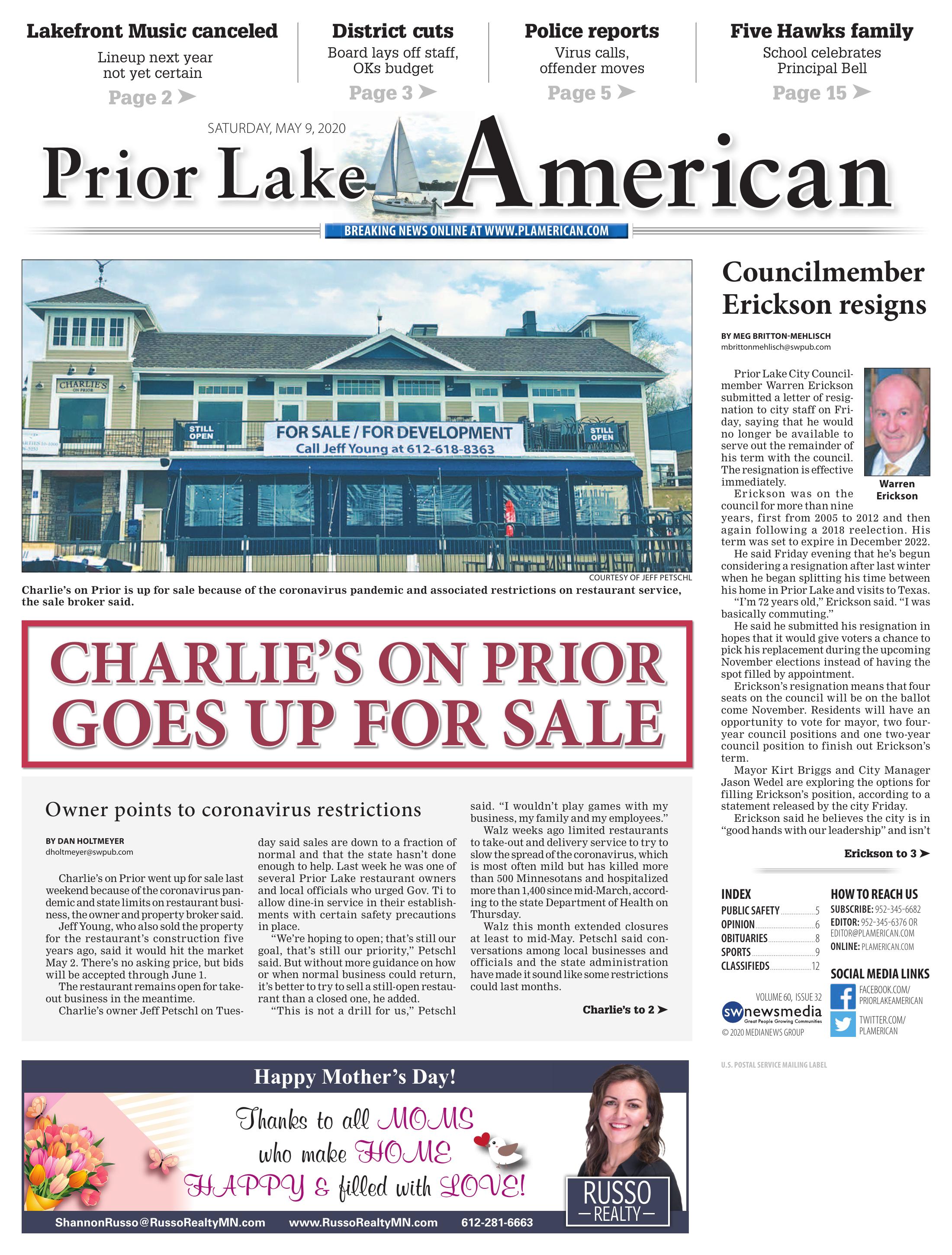