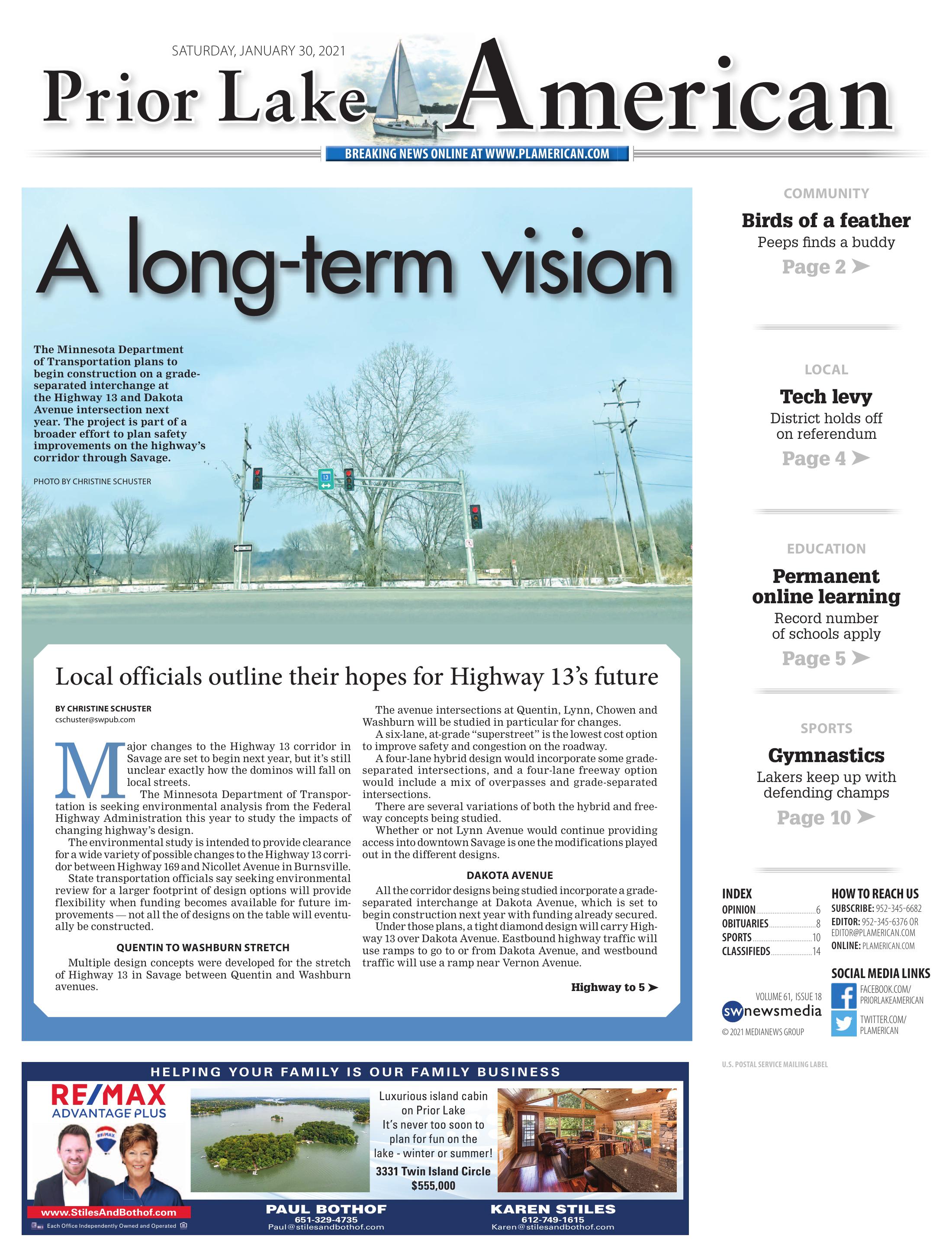 The Minnesota Department of Transportation plans to begin construction on a grade-separated interchange at the Highway 13 and Dakota Avenue intersection next year. The project is part of a broader effort to plan safety improvements on the highway’s corridor through Savage.

Major changes to the Highway 13 corridor in Savage are set to begin next year, but it’s still unclear exactly how the dominos will fall on local streets.

The Minnesota Department of Transportation is seeking environmental analysis from the Federal Highway Administration this year to study the impacts of changing highway’s design.

The environmental study is intended to provide clearance for a wide variety of possible changes to the Highway 13 corridor between Highway 169 and Nicollet Avenue in Burnsville.

State transportation officials say seeking environmental review for a larger footprint of design options will provide flexibility when funding becomes available for future improvements — not all the of designs on the table will eventually be constructed.

Multiple design concepts were developed for the stretch of Highway 13 in Savage between Quentin and Washburn avenues.

The avenue intersections at Quentin, Lynn, Chowen and Washburn will be studied in particular for changes.

A six-lane, at-grade “superstreet” is the lowest cost option to improve safety and congestion on the roadway.

There are several variations of both the hybrid and freeway concepts being studied.

Whether or not Lynn Avenue would continue providing access into downtown Savage is one the modifications played out in the different designs.

All the corridor designs being studied incorporate a grade-separated interchange at Dakota Avenue, which is set to begin construction next year with funding already secured.

A full closure of the highway is a possibility, he said, but access will still be provided to businesses.

The Highway 13 corridor has been subject to several studies and improvements over the past 20 years, but the roadway’s safety issues haven’t been resolved.

On average, 54,000 vehicles and trucks travel Highway 13 daily, according to MNDOT, and traffic counts are expected to continue to increase over the next 20 years.

The letter outlines more than a dozen requests related to the overall project, including a call for state planners to abandon one of the designs being considered.

“We want to be on record as having serious reservations about the viability and consistency of the superstreet option,” the letter reads, adding the superstreet proposal conflicts with past corridor improvements and the vision local and state agencies have “jointly worked towards.”

The superstreet design would widen Highway 13 to six lanes, and both add and take away traffic lights. The design would bring more continuous green lights for highway traffic, but create delays for cars entering or exiting from local streets.

In the letter, Williams and Beer also expressed a city and county-level commitment to contributing financially to the project if needed.

“We have concerns that too much emphasis is being placed on developing a fiscally constrained vision, based only on MnDOT’s resources for mobility investments,” they wrote.

Next, the letter raised concerns about inadequate consideration of public transit infrastructure.

The letter requests an in-line transit station, or a multi-modal transit station concept, be developed and included in the upcoming environmental analysis, adding these concepts should include the possibility of commuter rail on the Dan Patch Rail Line.

Thongvanh, Savage’s engineer, said the city and county will be conducting further studies to better understand how the corridor changes might impact local streets.

Local officials have expressed a hope to continue providing access into downtown Savage on Lynn Avenue, and there’s other concerns surrounding how the changes will impact the viability of the downtown area.

The letter, written by Williams and Beer, said future improvements should consider aesthetic impacts to Savage, such as ramps and walls that might shield visibility of downtown.