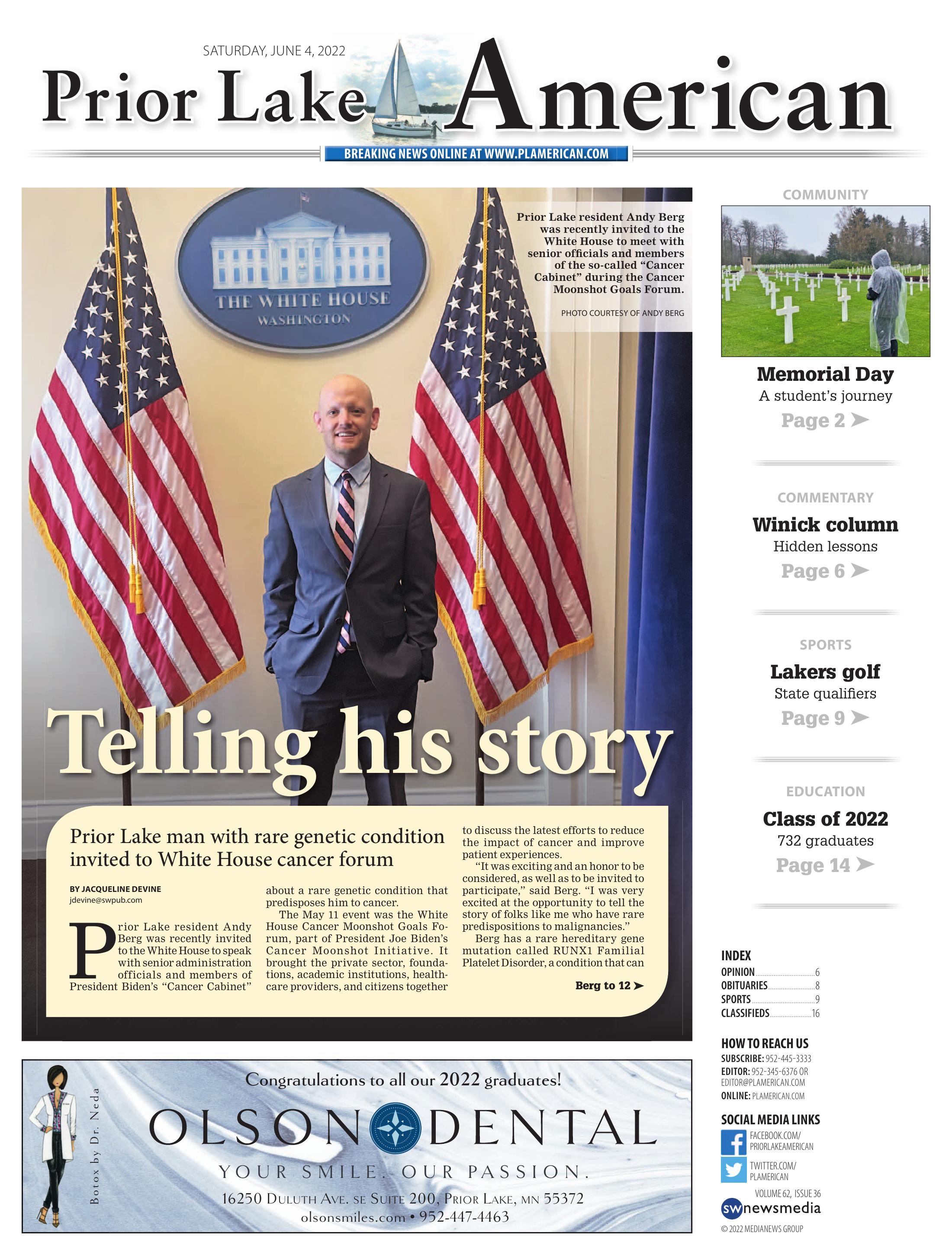 Prior Lake resident Andy Berg was recently invited to the White House to meet with senior officials and members of the so-called “Cancer Cabinet” during the Cancer Moonshot Goals Forum.

Prior Lake resident Andy Berg was recently invited to the White House to speak with senior administration officials and members of President Biden’s “Cancer Cabinet” about a rare genetic condition that predisposes him to cancer.

The May 11 event was the White House Cancer Moonshot Goals Forum, part of President Joe Biden’s Cancer Moonshot Initiative. It brought the private sector, foundations, academic institutions, healthcare providers, and citizens together to discuss the latest efforts to reduce the impact of cancer and improve patient experiences.

“It was exciting and an honor to be considered, as well as to be invited to participate,” said Berg. “I was very excited at the opportunity to tell the story of folks like me who have rare predispositions to malignancies.”

The event included Dr. Alondra Nelson, head of the White House Office of Science and Technology; Denis McDonough, U.S. Secretary of Veterans Affairs; and representatives from the U.S. Departments of Agriculture and Health and Human Services.

According to the White House website, Biden launched the Cancer Moonshot initiative in 2016 when he was vice president.

In 2018, Berg said, his father was diagnosed with chronic myelomonocytic leukemia and made the decision to have a stem cell transplant. The transplant was successful and his rare blood cancer led to several tests to determine its cause.

It was then that doctors discovered Berg’s father had the rare condition. The disease was passed down to Berg and his daughter, Emi, who was diagnosed when she was three-years-old.

Berg said his father beat cancer and is currently in full remission. He said the discovery of the diagnosis has also led his family to be tested annually to ensure they are in good health.

“We’re fine today,” he said. “The disorder is a genetic mutation, so it puts us in higher risk of malignancies. I’m predisposed to low platelet count and my platelets don’t work properly, which causes us to bruise very easily and have a higher risk of bleeding. Same with my daughter, she has the same issues.”

He added: “Other issues we suffer from are really horrible allergy symptoms along with eczema. We monitor it and go in for yearly bone marrow biopsies and we also have quarterly blood draws to ensure we’re following a lack of progression to a malignancy.”

Following his diagnosis, Berg said he was introduced to the RUNX1 Research Program, which is the only non-profit in the world that supports patients with the rare disease. He said he now volunteers for the organization and raises awareness for the disease.

“I’m past the median age for cancer development in a RUNX1 patient. So, if I progress to malignancy, the odds are that I’ll have a stem cell transplant like my dad and live with the effects of that my entire life,” he said. “But organizations like the RUNX1 Research Program and the Cancer Moonshot give our family hope that one day soon there will be more choices out there for my daughter.”

Biden and First Lady Jill Biden recently announced a call to action to jumpstart cancer screenings that were missed during the COVID pandemic and to help ensure that everyone benefits equitably from the prevention, detection and diagnoses of cancer.

Berg said more than 10 million cancer screenings were missed during the pandemic. “Never skip your screenings,” he said. “It’s vitally important to always follow through on those. It’s a hassle, but less of a hassle than getting cancer.”

Berg encourages everyone to donate to the X-Out Cancer Campaign, a fundraiser by the RUNX1 Research Program. The campaign raises and donates 100 percent of the funds it receives to cancer prevention research, as well as patient initiatives and education.

The RUNX1 Research Program can be found at https://www.runx1-fpd.org/

President Biden's Cancer Moonshot Initiative can be found at https://www.whitehouse.gov/cancermoonshot/ 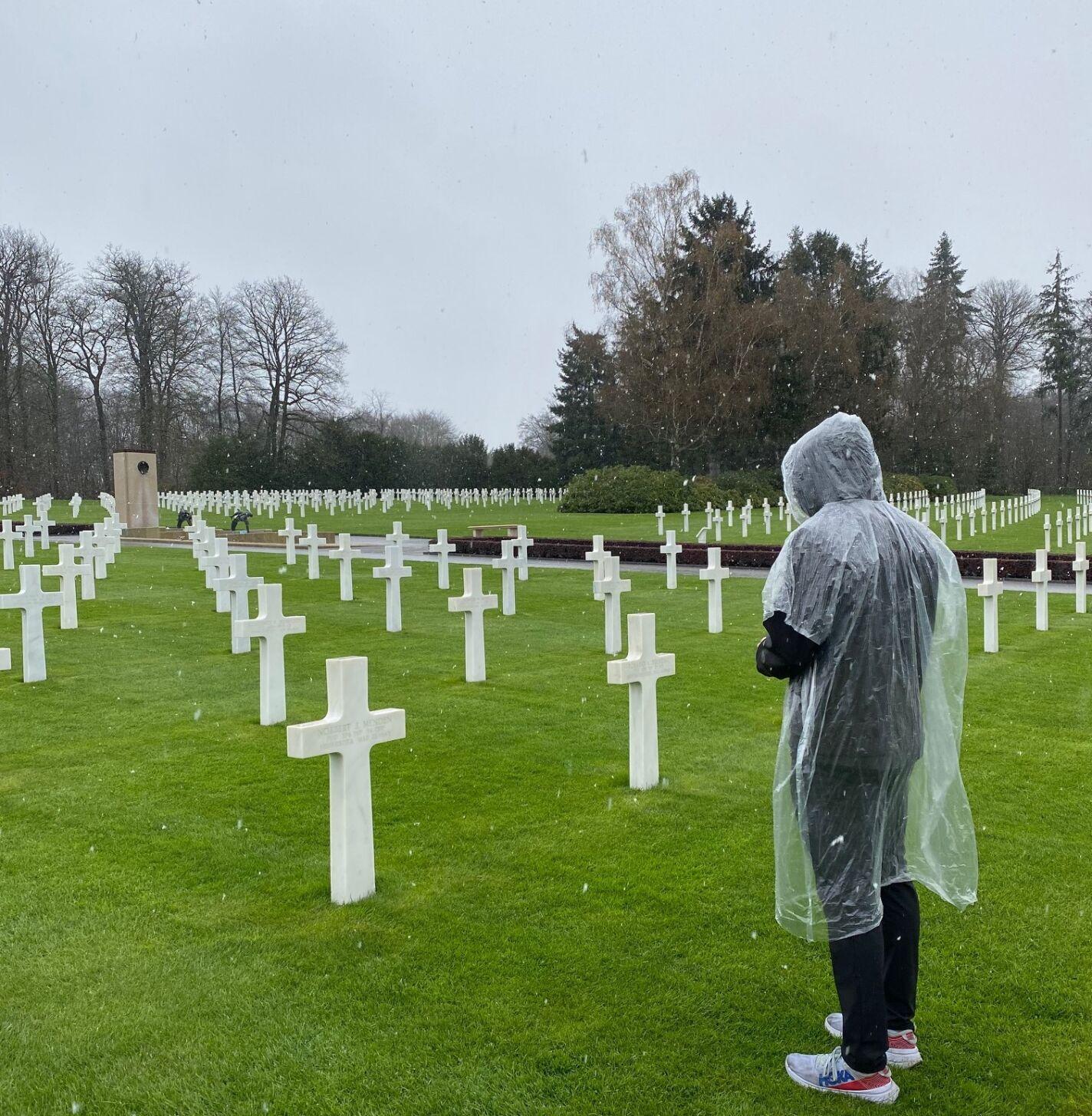