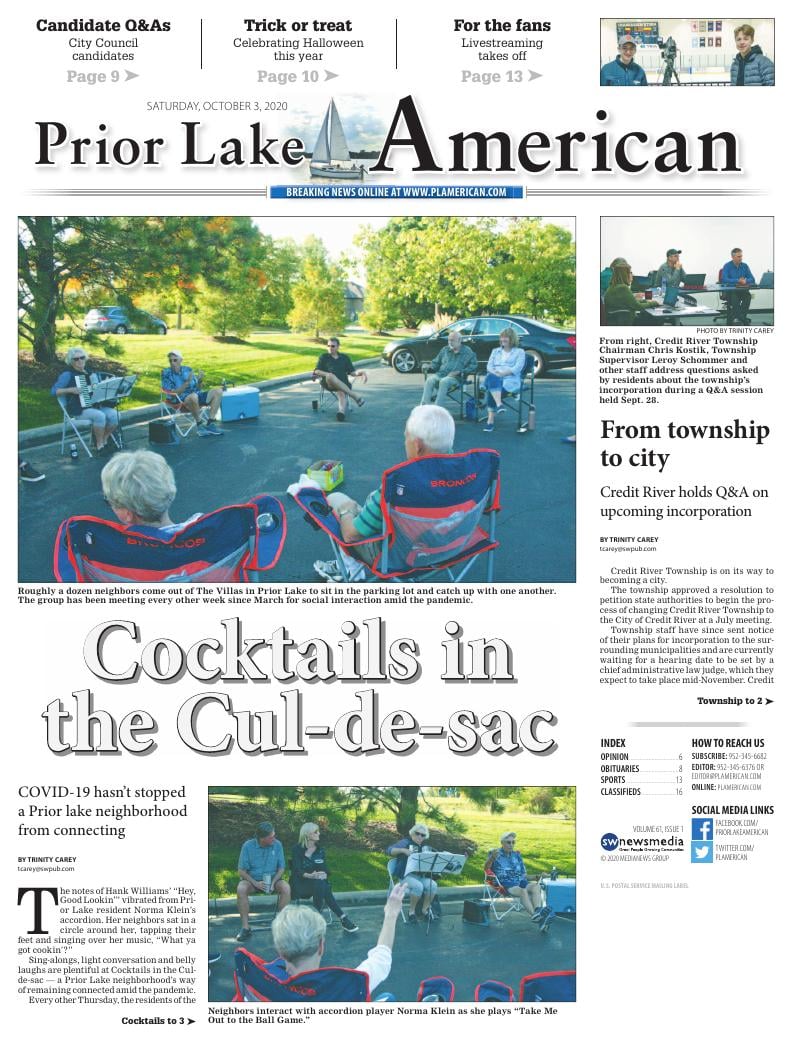 Roughly a dozen neighbors come out of The Villas in Prior Lake to sit in the parking lot and catch up with one another. The group has been meeting every other week since March for social interaction amid the pandemic.

Neighbors interact with accordion player Norma Klein as she plays “Take Me Out to the Ball Game.”

Residents of The Villas at The Wilds sing and clap along to their neighbor playing the accordion during their regular Cocktails in the Cul-de-sac gathering.

Residents of The Villas at The Wilds sing and clap along to their neighbor playing the accordion during their regular Cocktails in the Cul-de-sac gathering.

Norma Klein plays her accordion for her neighbors Sept. 24 at The Villas at The Wilds.

Prior Lake neighbors sip cocktails and visit during a Cocktails in the Cul-de-sac gathering. The get-togethers have brought the neighbors closer together since the start of the pandemic.

Beth and Lou Tesler listen to their neighbor play the accordion during Cocktails in the Cul-de-sac. The Teslers said the regular gatherings have provided stress relief during the pandemic.

Beth and Lou Tesler listen to their neighbor play the accordion during Cocktails in the Cul-de-sac. The Teslers said the regular gatherings have provided stress relief during the pandemic.

The notes of Hank Williams’ “Hey, Good Lookin’” vibrated from Prior Lake resident Norma Klein’s accordion. Her neighbors sat in a circle around her, tapping their feet and singing over her music, “What ya got cookin’?”

Sing-alongs, light conversation and belly laughs are plentiful at Cocktails in the Cul-de-sac — a Prior Lake neighborhood's way of remaining connected amid the pandemic.

Every other Thursday, the residents of the Villas at The Wilds grab their drinks, camp chairs, snacks and sunglasses and head for their street where they will meet for roughly an hour to catch up with one another.

Organizer of the gatherings and resident Betsy Jader said she and the other women of the neighborhood used to meet for a coffee hour pre-pandemic, but closed coffee shops kept them from seeing one another. Though the gatherings aren’t an idea original to Jader, she wanted to bring her neighbors closer together.

“I sent out a notice and [got] a huge turnout,” she said. “I think we were all starved for interaction with other people, so it was really a lot of fun and we've just continued alternating Thursdays."

On the off weeks the women still meet for their usual coffee date, but bring their mugs out to the cul-de-sac and the men meet for their gathering just a few hours later.

“Every Thursday is filled with some neighborhood function right here,” Jader said.

Villa resident Patrick Klein said his neighbors at his second home in Arizona have been having similar gatherings and he’s gotten to know a lot more about the neighbors he used to only exchange a wave with. One neighbor he has lived next to for 10 years and seen just a handful of times, but now he sees him every week.

“We got to know each other where before we didn't, just said hi and passed each other, so COVID’s got one positive thing coming out of it,” he said.

The gatherings have provided an escape to its attendees. The topics of conversation range from the best cleaning products, golf techniques, music — all light-hearted neighborly chatter, but the dozen or so neighbors have become like family along the way.

“We just love these people,” Barbara Grodahl said, her voice cracking with emotion.

Barbara and her husband Robert lived at the Villas for 14 years. Though they’ve relocated to another nearby neighborhood, the Cocktails in the Cul-de-sac crew was sure to extend the invitation to their old friends.

“We didn't expect to be included and it's just really nice,” Barbara said. “It feels loving, it feels like a big hug in COVID no-hugging days.”

The gatherings provide a sense of connection during these challenging times, they agreed.

“It’s nice. It’s like a family thing we still have even though we've moved,” Robert said.

The Villas longest tenants Lou and Beth Tesler said the gatherings brought the group, who was feeling a bit socially deprived, together in a relatively safe manner. Cocktails in the Cul-de-sac has been a regular stress reliever.

“Everybody was feeling too isolated and we really needed some company and some laughter and lightness,” Beth said.

The Reicherts just moved to the neighborhood in the last two weeks and on Thursday, Sept. 24 they got to meet all their neighbors in one place. Coming from the mountains of Colorado, it’s nice to be able to get together with those you live by, they said. The gathering is just one more display of the friendliness of Prior Lake residents that they’ve experienced so far.

The group sipped their cocktails and sang “Happy Birthday” to the newest member of the neighborhood Tom Reichert while Norma played the tune on her accordion.

Ryan Sammons (camera/production) and Owen Slinde (play-by-play) are the duo behind the Chanhassen Sports Broadcasting Crew, which started production in the winter of 2020 with hockey and basketball. 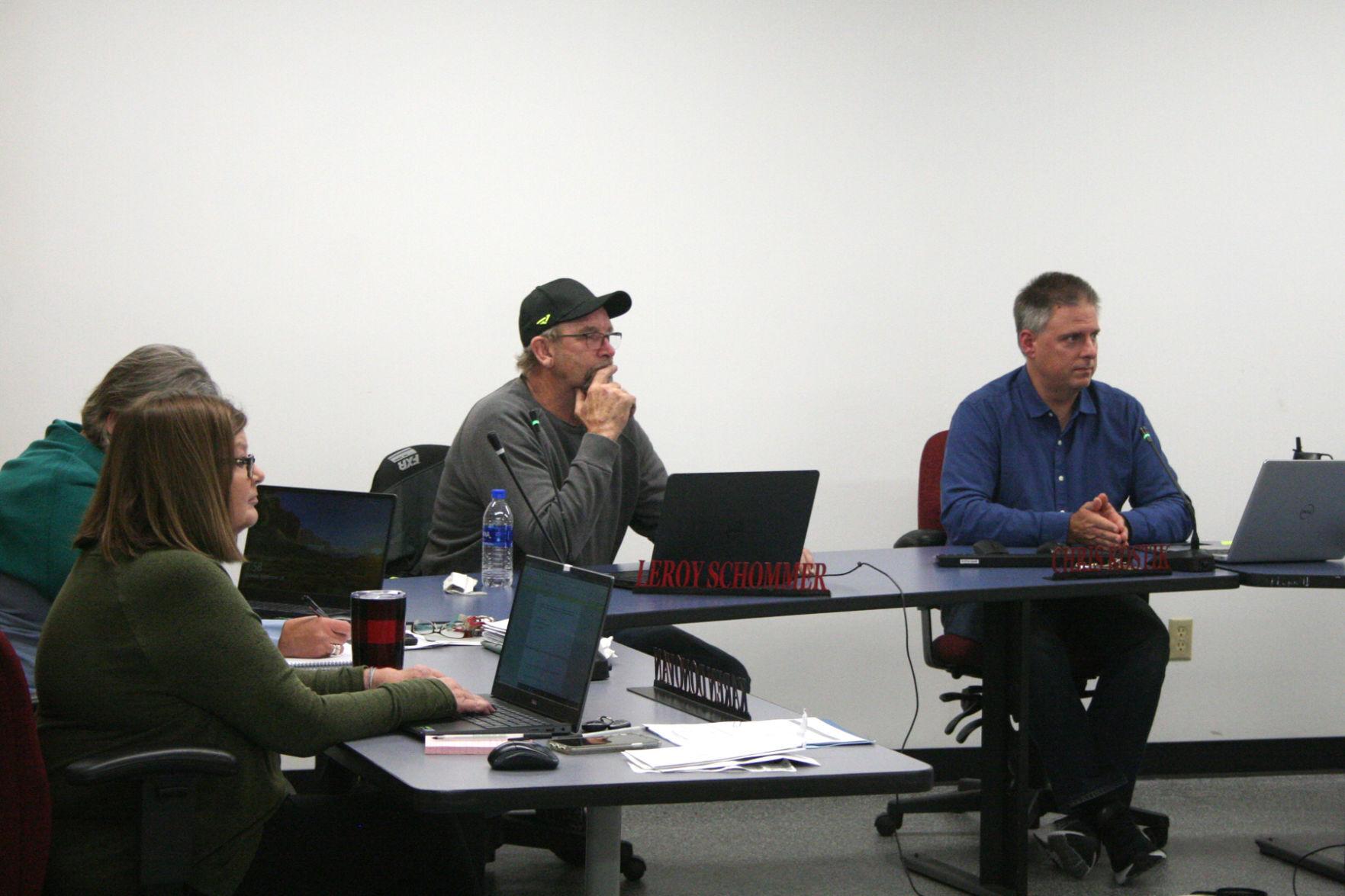 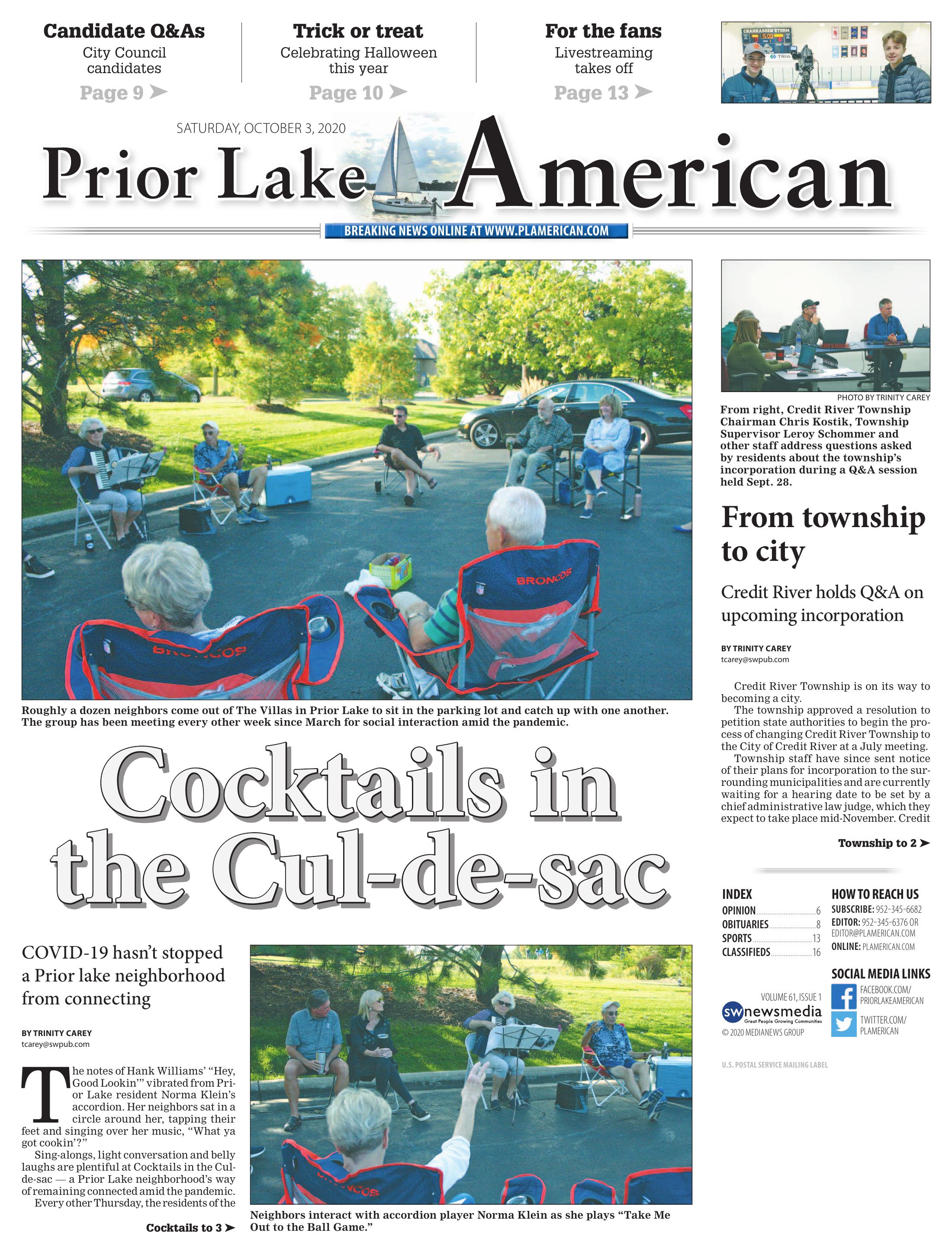