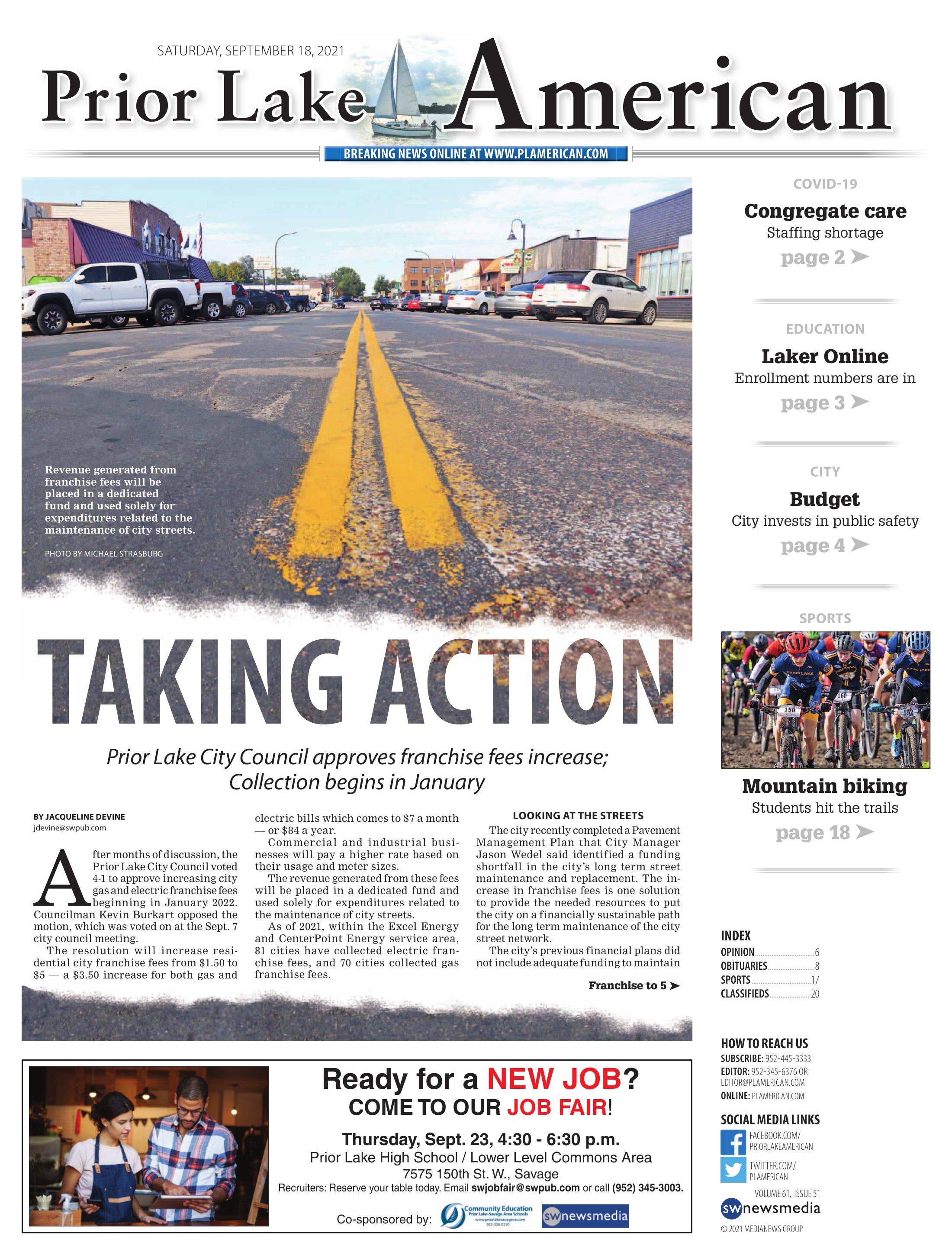 Revenue generated from franchise fees will be placed in a dedicated fund and used solely for expenditures related to the maintenance of city streets.

After months of discussion, the Prior Lake City Council voted 4-1 to approve increasing city gas and electric franchise fees beginning in January 2022. Councilman Kevin Burkart opposed the motion, which was voted on at the Sept. 7 city council meeting.

Commercial and industrial businesses will pay a higher rate based on their usage and meter sizes.

The revenue generated from these fees will be placed in a dedicated fund and used solely for expenditures related to the maintenance of city streets.

LOOKING AT THE STREETS

The city recently completed a Pavement Management Plan that City Manager Jason Wedel said identified a funding shortfall in the city’s long term street maintenance and replacement. The increase in franchise fees is one solution to provide the needed resources to put the city on a financially sustainable path for the long term maintenance of the city street network.

The city’s previous financial plans did not include adequate funding to maintain an average network Overall Condition Index of 70. OCI is based on a scale from 0 to 100 — 100 representing a newly constructed street, and a street towards 0 would be a street in complete disrepair and in a very deteriorated condition.

Beyond 2023, consistent funding levels have not been identified for pavement management, particularly for mill and overlay projects. The city’s current average rating for all city streets is 70 — which is within their maintenance goal range.

Wedel said he is in support of increasing franchise fees in order to keep up with road maintenance over the years.

“When we look at the history of Prior Lake, we develop too rapidly at certain times and what happens with that the mileage increases and you have to be able to maintain those roads,” said Wedel. “I think this conversation has been going on a while and we haven’t done anything about it. It’s also the reason development that goes unchecked gives me heartburn and why this council needs to continue to fight on making sure they pay their fair share on the development up front because the taxpayer has to pay the maintenance on the back side of it in perpetuity.”

Failing to address the shortfall now, Wedel said, will lead the city into massive debt in the future.

“We currently have a $4.94 million problem today and if we ignore it, it’s going to turn into a $200 million one, which will leave the city with crushing debt in the future,” he said. “So for me, it gives me heartburn not to address it. I think it’s the right thing to do for the long term of the city and it’s going to cost us vastly more money than what it is today to actually maintain it.”

Burkart opposesWhile the majority of the city council voted to approve increasing franchise fees, Burkart opposed the motion, stating he was in favor of other solutions.

“I appreciate the staff raising the shortfall issue. I’m not opposed to raising the revenue on property to maintain our infrastructure, I just disagree with the method proposed here,” said Burkart. “I’m against debt and I’m in favor of pay as you go. Do the taxpayers a favor and put it in the levy. I’d be in favor of denying the ordinance at this time.”

Burkart said he is concerned the franchise fees may be set too high too suddenly.

“I’m concerned the proposed dramatic franchise fee increases, they are regressive in nature, meaning they’re not based on home value they’re also not deductible,” said Burkart. “I’ve heard ‘user fee’ used but they’re not really user fees, they’re a fixed base fee so they’re not based on amount of use. Staff were quoted as saying ‘light fees’ because money is set aside, but I believe we can do that in a levy, we do it for each of our line items.”

Burkart said levies also have the ability to save funds for specific items which he argues is more fair to tax payers.

“It would be much more transparent if staff, as they say, we need to maintain a PMP between 70 and 75, if it was in the levy,” he said. “If we need more money to run the basic services for the infrastructure for the city it should be as a transparent part of the levy where we’re having this discussion each year around the levy, which is an item that is progressive in nature in alignment with our tax system and deductible and can be lined up for specific uses each year.”

Why franchise fees?Minnesota Statute 216B.36 allows cities to charge a franchise fee to both electric and gas utility companies for operating in the city owned right-of-way. Many cities across the state use franchise fees to offset city expenses for street maintenance that would otherwise go to the property tax levy, according to the ordinance related to gas and electric franchise fees.

Wedel said maintenance is critical for extending the usable life of city streets to 50-plus years and avoiding costly road replacement. The projected cost of street maintenance in Prior Lake is estimated to be $95 million over 20 years, or $5 million annually.

The city of Prior Lake last entered into franchise agreements with gas and electric utility companies in 2006. Since then, road maintenance needs and costs has risen over time which is why city officials say it’s crucial to increase the rates to reflect the increase in funding needs that have occurred over time.

The approved franchise fee ordinance will be sent to utility companies by Sept. 30 before the anticipated start of fee collection Jan. 1, 2022. 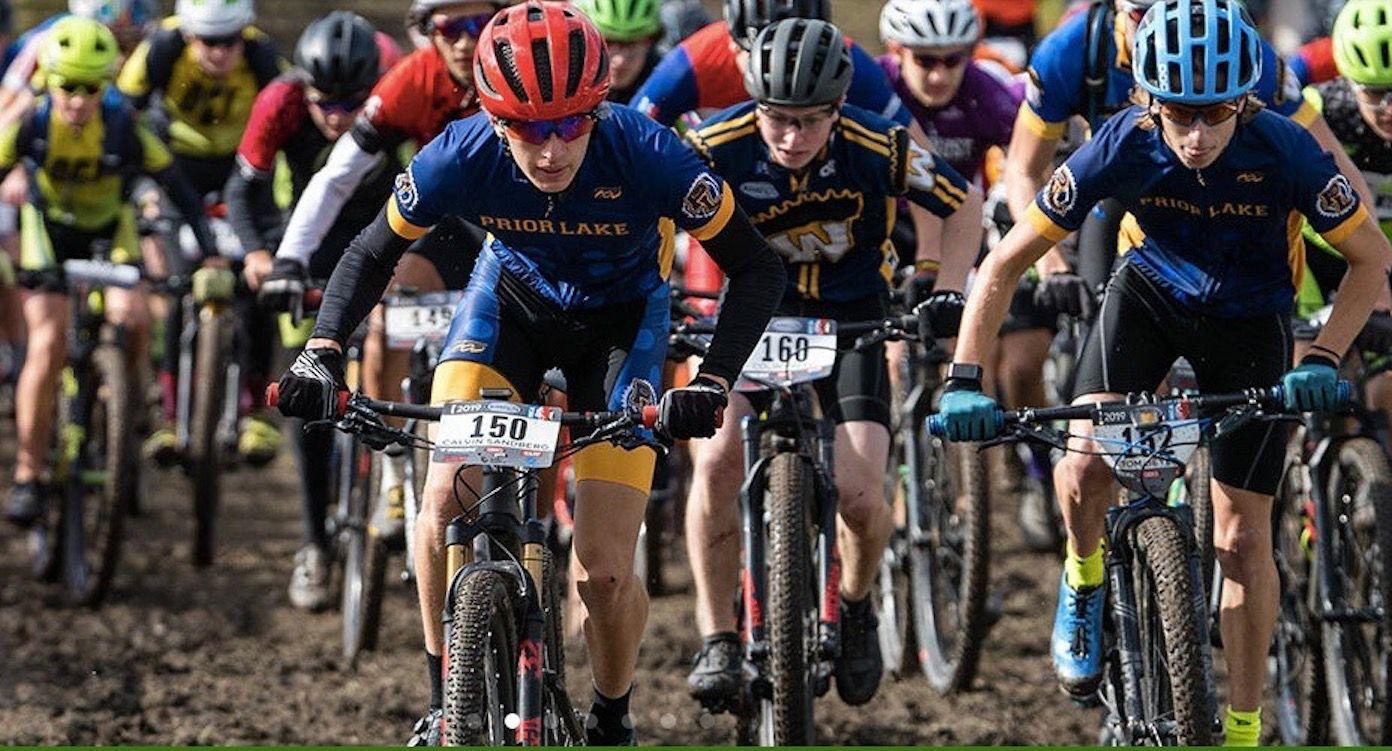 The Minnesota State High School Cycling League started in 2012 with roughly 150 riders on 15 teams from grades sixth through 12. This fall there are roughly 2,400 athletes competing on more than 80 teams.