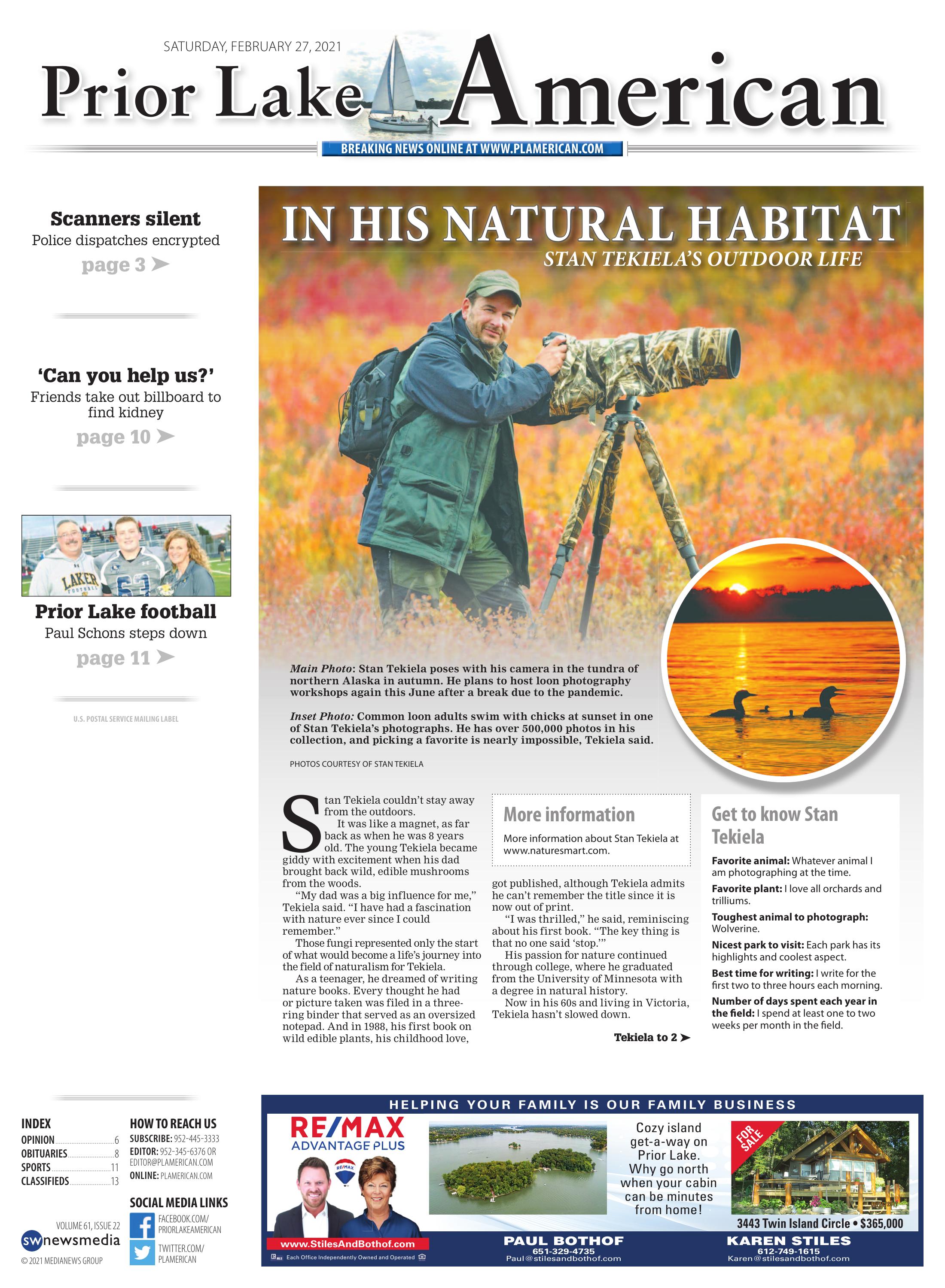 Stan Tekiela couldn’t stay away from the outdoors.

It was like a magnet, as far back as when he was 8 years old. The young Tekiela became giddy with excitement when his dad brought back wild, edible mushrooms from the woods.

“My dad was a big influence for me,” Tekiela said. “I have had a fascination with nature ever since I could remember.”

Those fungi represented only the start of what would become a life’s journey into the field of naturalism for Tekiela.

As a teenager, he dreamed of writing nature books. Every thought he had or picture taken was filed in a three-ring binder that served as an oversized notepad. And in 1988, his first book on wild edible plants, his childhood love, got published, although Tekiela admits he can’t remember the title since it is now out of print.

“I was thrilled,” he said, reminiscing about his first book. “The key thing is that no one said ‘stop.’”

His passion for nature continued through college, where he graduated from the University of Minnesota with a degree in natural history.

Now in his 60s and living in Victoria, Tekiela hasn’t slowed down.

The term “naturalist” may have different meanings, depending on who is asked, but Tekiela simply calls it an educator of nature.

And for the last 30 years at the Eden Prairie Outdoor Center, on the shore of Staring Lake, that is exactly what Tekiela has been.

Because of the COVID-19 pandemic, Tekiela said he’s seen a significant uptick in visitors to the outdoor center, which can be a double-edged sword.

“We had record visitors last summer, but we’re also being overrun at all the parks in the state,” he said.

Tekiela added that he sees bags of trash and litter being picked up in parks at higher levels than ever before, as well as more structural damage within nature centers.

As the director of the center, he also leads teaching sessions for visitors and groups, as well as photo tours around the country, ranging from Yellowstone National Park to Florida to northern Minnesota.

When he’s not traveling, especially the last nine months due to the COVID-19 pandemic, Tekiela doesn’t slow down.

Now an author of over 200 books, he continues to write with his time at home. On average, Tekiela said he writes four to six books at a time, but since last March, that has been as high as 20.

Along with books, he produces a syndicated newspaper column for Southwest News Media (including this newspaper), which has been published for the last 25 years, with dynamic photographs and insight into plants and animals.

Nearly a quarter-century ago, Tekiela walked into Eden Prairie News editor Mark Weber’s office uninvited, pitching an idea for a column he wanted to write for the newspaper.

“I was pretty skeptical of people walking into my office and saying they wanted to write for the newspaper,” Weber remembered thinking.

But after talking more with Tekiela, Weber said he found the naturalist very knowledgeable and OKed his Nature Smart column. Now, 650 biweekly columns later, Weber is amazed at where Tekiela’s career has taken him.

“Who knew it would lead to so many different things on his part,” he said. “The guy is a one-person industry.”

Tekiela’s media rise, like his weekly radio show on KFAN every Saturday morning from 6-8 a.m., excites his former editor.

“I can’t explain how big a thrill it is to listen to a program and hear Stan talking,” Weber said.

Throughout his career, hundreds, if not thousands, of letters and messages conveying thanks have reached Tekiela. It’s the main reason Tekiela presses on his career — sparking interest in everyone about nature.

“It’s one of the things that keeps me going,” he said. “I will never stop. I hope to continue doing this forever.”

Get to know Stan Tekiela

Favorite animal: Whatever animal I am photographing at the time.

Favorite plant: I love all orchards and trilliums.

Nicest park to visit: Each park has its highlights and coolest aspect.

Best time for writing: I write for the first two to three hours each morning.

Number of days spent each year in the field: I spend at least one to two weeks per month in the field. 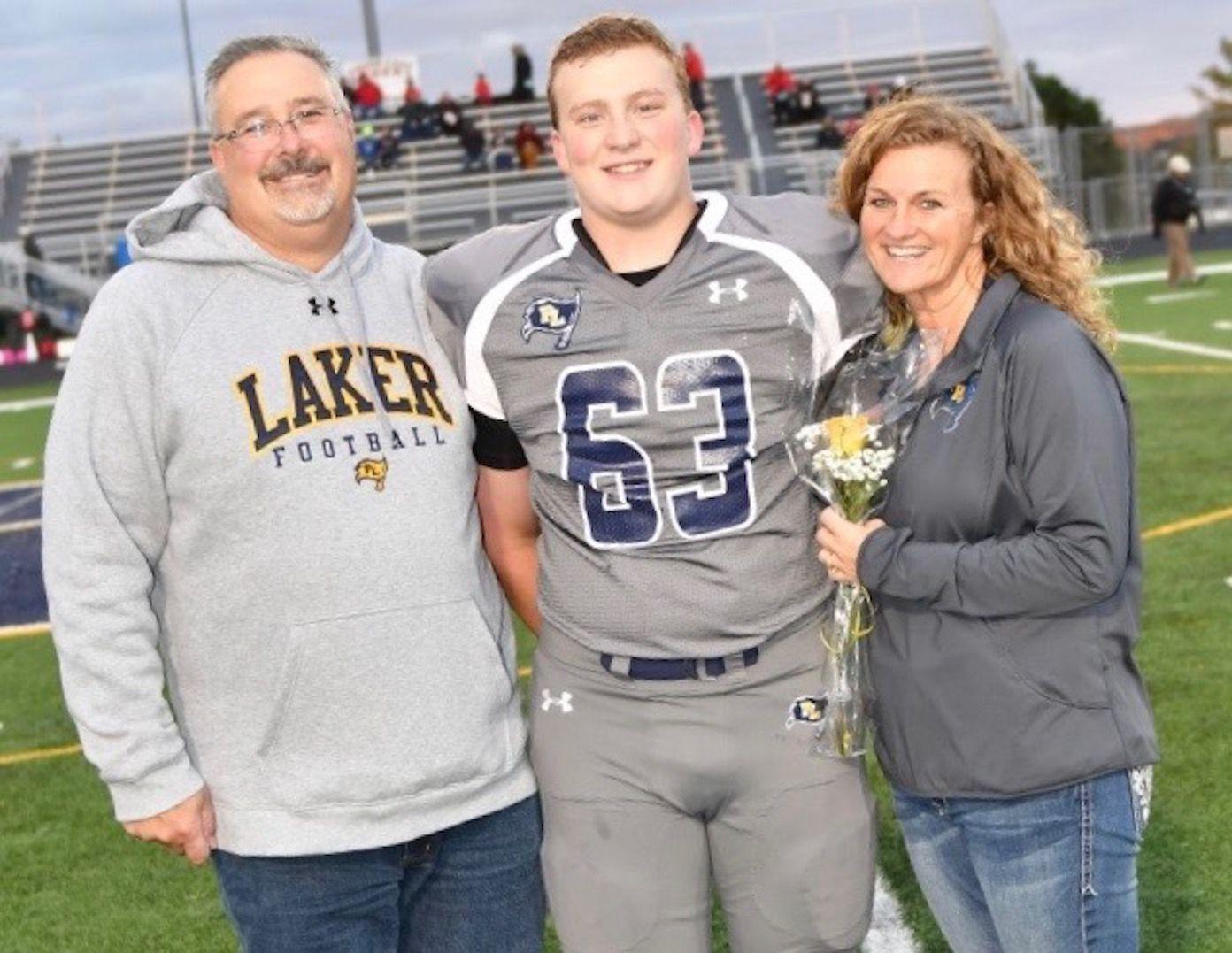 Paul Schons, pictured with his wife Sue and one of his four sons, Zach, recently stepped down after 13 years as the director of the Prior Lake Touchdown Club.