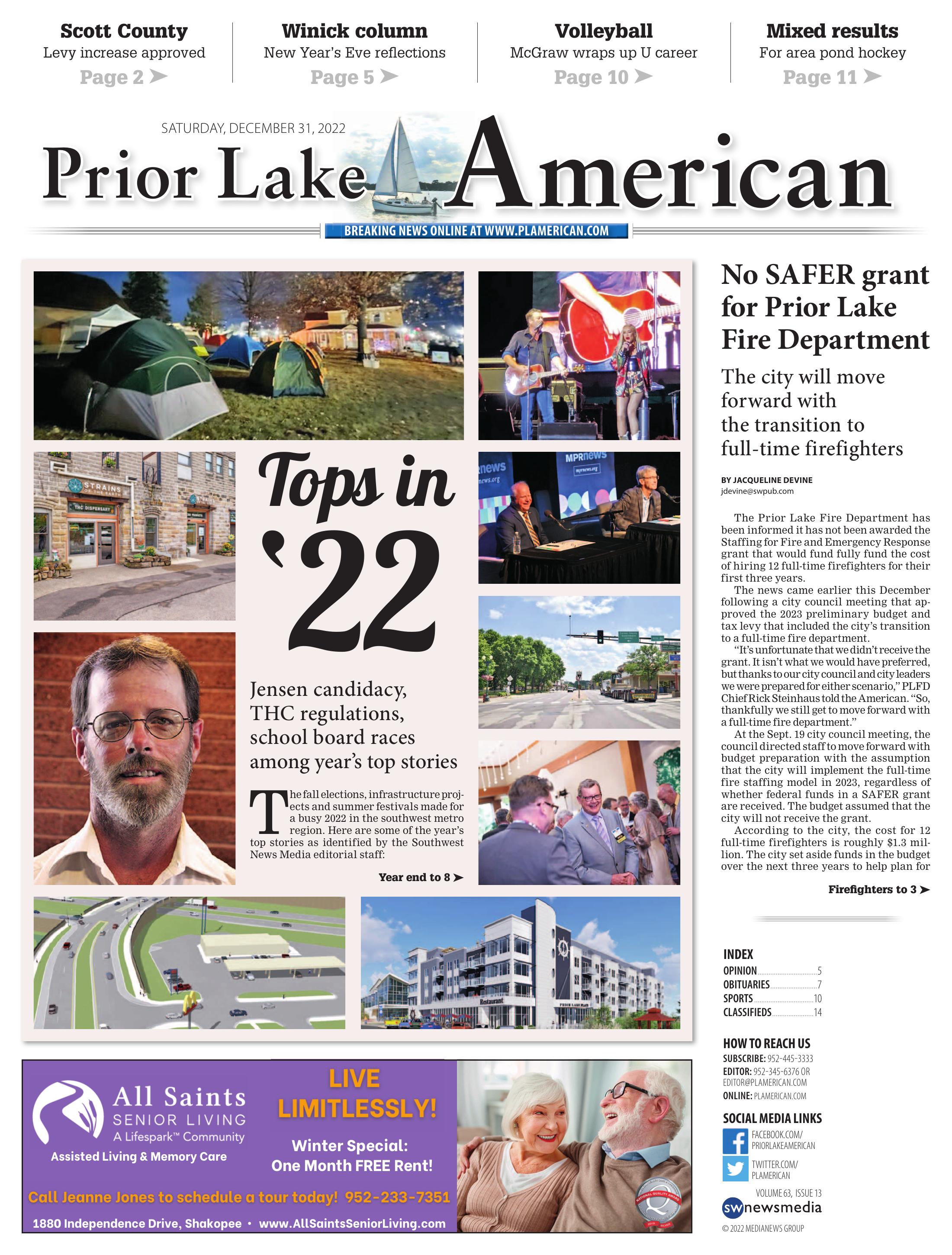 A Prior Lake Fire Department unit can be seen parked in front of Prior Lake City Hall on Monday, July 18.

Courtesy Photo City of Prior Lake

The Prior Lake Fire Department was recently informed that it was not awarded the Staffing for Fire and Emergency Response (SAFER) grant that would fully fund the cost of hiring 12 full-time firefighters for their first three years earlier in December.

The Prior Lake Fire Department has been informed it has not been awarded the Staffing for Fire and Emergency Response grant that would fund fully fund the cost of hiring 12 full-time firefighters for their first three years.

The news came earlier this December following a city council meeting that approved the 2023 preliminary budget and tax levy that included the city’s transition to a full-time fire department.

“It’s unfortunate that we didn’t receive the grant. It isn’t what we would have preferred, but thanks to our city council and city leaders we were prepared for either scenario,” PLFD Chief Rick Steinhaus told the American. “So, thankfully we still get to move forward with a full-time fire department.”

At the Sept. 19 city council meeting, the council directed staff to move forward with budget preparation with the assumption that the city will implement the full-time fire staffing model in 2023, regardless of whether federal funds in a SAFER grant are received. The budget assumed that the city will not receive the grant.

According to the city, the cost for 12 full-time firefighters is roughly $1.3 million. The city set aside funds in the budget over the next three years to help plan for the cost. As part of the 2023 budget proposal, that funding is being pushed ahead and tapped earlier so a full-time department can be funded now.

According to previous reporting, the $17.3 million budget, approved unanimously, is a 13.35% increase over 2022; the full-time fire department comprises 5.62% of the levy increase.

Steinhaus also said the fire department will be moving forward as normal and continue providing fire services to the community.

“At the end of the day, we just couldn’t continue to operate as a fully paid on-call fire department,” Steinhaus said. “We appreciate all that our paid on-call firefighters do, and we’ll continue to need them, but people lead busy lives and asking somebody to drop what they’re doing at a moment’s notice for part-time pay just isn’t sustainable.”

Steinhaus added that as the community grows, the need for public safety grows and having firefighters available 24 hours a day, 7 days a week and at a moment’s notice can literally mean the difference in saving a house or somebody’s life.

“Right now, we’re moving forward with the hiring process. We’ll be bringing in 12 full-time firefighters in July and with that, we’re remodeling Fire Station No. 1,” Steinhaus said “Emergencies can happen any time during any day so the fire station has been retrofitted with a remodeled kitchen, living space and bedrooms so our firefighters can be available around the clock and at a moment’s notice.”

Currently, Prior Lake has 33 part-time, on-call firefighters serving a 74 square mile area. In addition to Prior Lake, the department also services Credit River and Spring Lake Township. The city budgets for 50 firefighters, but part-time pay cannot keep pace with today’s competitive job market. So, retention of part-time firefighters is a challenge, their response times are also a challenge. When an emergency call comes in, firefighters literally drop what they are doing, drive into the station, and head out on the call — average response time is 8 minutes and 57 seconds. That’s well below the National Fire Protection Association’s standard for arrival on scene at 6 minutes with a staffed crew.

Implementation of the full-time fire department is anticipated to begin in July 2023. Part-time, on call firefighters will still be staffed and would continue to assist on an as needed basis.

Despite rainy weather, Martha Brannon of His House Foundation said this year’s Sleep Out had the “best turnout ever.” Besides music, a fire pit and food, the organization projected videos on the church’s exterior from people who’ve experienced homelessness.

Courtesy of Strains of the Earth

Based in Jordan, Strains of the Earth has opened a new store in Carver.

A view looking north of the planned upgrade to the U.S. Highway 169/State Highway 282 interchange in Jordan.

File image courtesy of city of Prior Lake

A proposed apartment complex in downtown Prior Lake would include 97 rental units and a restaurant.

A construction project in Chaska will reduce Highway 41 as it runs through the downtown area from two lanes to one with turn lanes.

A highlight of Twin Cities Summer Jam was a surprise appearance from Gwen Stefani during Blake Shelton’s set Saturday night.

The fall elections, infrastructure projects and summer festivals made for a busy 2022 in the southwest metro region. Here are some of the year’s top stories as identified by the Southwest News Media editorial staff:

Chaska physician Scott Jensen ran for governor on a ticket that included former Vikings center Matt Birk as his running mate. The two came up short, earning 44.6% of the vote to 52.3% for Gov. Tim Walz and Lt. Gov. Peggy Flanagan.

Jensen, who had previously represented the Chaska area in the Legislature, won the Republican Party nomination earlier in the year over former health care executive Kendall Qualls at the party’s state convention.

“We didn’t have a red wave,” Jensen told supporters after the election. “It was a blue wave. And we need to stop and we need to recalibrate. … We need to learn what can we do better.”

Housing needs in the area

A tug-of-war has broken out in the southwest metro region over the response to increasing homelessness.

With resources in Minneapolis, St. Paul and Mankato overburdened, a lack of affordable housing and resources for the homeless in Carver and Scott counties has prompted some to take action. Churches, nonprofits and charities continue to raise awareness and gather supplies for those less fortunate.

Meanwhile, the city of Savage considered purchasing the city’s Quality Inn, a place known to host those experiencing homelessness.

The problem doesn’t have a clear solution as a consulting firm reported more than 2,200 new affordable housing units will be needed in Scott County alone by 2040.

Legislation passed in St. Paul opened the door for businesses to sell digestible products containing THC, the psychoactive chemical in marijuana. With little guidance on licensing and regulation, cities have been left to fend for themselves.

Some cities, like Chaska, have taken a hands-off approach, waiting for more clarification from the state. Prior Lake and Savage, meanwhile, passed one-year moratoriums on THC sales, as did Jordan, which also allowed an exemption for a shop already selling the product.

Shakopee passed an ordinance allowing sales to those with a yearly license, only available to those who already possess a tobacco products license.

Slowly, the Highway 169 interchange project in Jordan continues to inch forward. The city council — and the public at large — had the chance to review proposed designs for the project in 2022, but completion of the project remains years away, perhaps in spring 2026.

A deadline for the project looms in the coming months: the project must be bid out by September 2024 to retain $15 million in federal funding. Legislators will push for more funding in a potential bonding bill to bridge the gap between secured money and the projected $49 million price tag.

The fall school board elections featured candidates backed by teachers unions and others, running together in groups, who were backed by an organization touting itself as a parental rights group.

One of the candidates backed by the parents group, Joe Scott, won a seat on the Eastern Carver County School Board while two others, Lisa Atkinson and Amy Bullyan, snared seats on the Prior Lake-Savage Area School Board.

A main issue in the campaigns: the role schools should play in emphasizing issues of racial justice and gender identity.

The Prior Lake City Council passed a resolution in November supporting a downtown apartment complex to be built between city hall and Lakefront Plaza. The complex would feature 97 new apartment units, underground parking and a 2,600 square-foot restaurant on the ground floor.

Opponents of the project raised concerns that the building will cause increased traffic and conflict with the city’s small-town feel.

“This proposal is Class A premium market-rate rentals and we don’t have that kind of product in our city right now,” Councilmember Kevin Burkart said in May. “To me, this is as good as it gets.”

The 2022 elections had plenty of tight races, but not many featured the experience Matt Lehman and Bill Mars brought to the Shakopee mayor’s race. Lehman, a 20-year veteran of the city council, bested Mars by about 200 votes to win the Nov. 8 general election.

“Thank you to the residents for the opportunity to serve the community, whether that’s elected or appointed,” Mars said following his loss. “I stand tall working every day very hard to make Shakopee a better place.”

Peter Moe, the director of the University of Minnesota Landscape Arboretum, announced his retirement after nearly 50 years with the organization.

Moe started at the Arb in 1973 as a University of Minnesota student gardener. He was hired as a research plot technician at the Arb’s Horticultural Research Center after graduating from the College of Food, Agricultural and Natural Resource Sciences. He became director two years later.

“I have been very blessed to be part of the University of Minnesota Landscape Arboretum and Horticultural Research Center, a world-class institution that has made a positive impact on the lives of many Minnesotans,” Moe said.

In January, Chaska residents can expect to see construction on a pedestrian tunnel near the Chaska Mill as work continues on a downtown revitalization project. In early spring, Highway 41 through the downtown area will be closed.

The goal of the project is to address the condition of the busy roadway and to also promote the revitalization of the downtown area, officials said. The project will reduce Highway 41 from two lanes in each direction to one, with the addition of turn lanes at intersections.

This year was the end of the line for the popular Twin Cities Summer Jam, which was closed after its campgrounds were sold to make way for a planned 19,000-seat amphitheater at Canterbury Commons. The concert event was founded in 2018 with Canterbury Park being its venue.

“It didn’t work out, but we don’t hold any ill will against the city of Shakopee or Canterbury Park because they’ve got to make business decisions,” Twin Cities Summer Jam CEO Jerry Braam said.