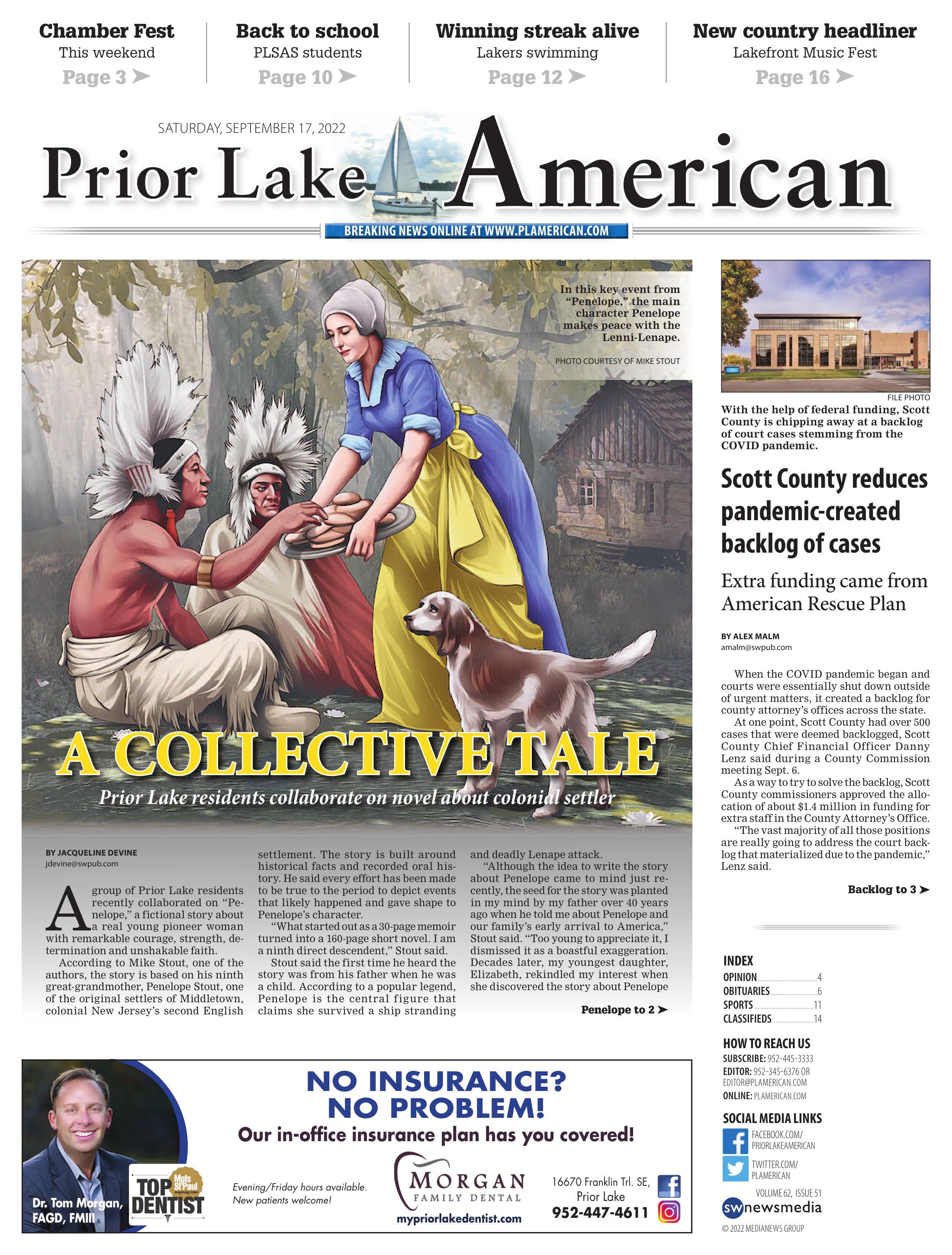 In this key event from “Penelope,” the main character Penelope makes peace with the Lenni-Lenape.

In this key event from “Penelope,” Penelope’s ship gets caught in a storm and later becomes shipwrecked.

A group of Prior Lake residents recently collaborated on “Penelope,” a fictional story about a real young pioneer woman with remarkable courage, strength, determination and unshakable faith.

According to Mike Stout, one of the authors, the story is based on his ninth great-grandmother, Penelope Stout, one of the original settlers of Middletown, colonial New Jersey’s second English settlement. The story is built around historical facts and recorded oral history. He said every effort has been made to be true to the period to depict events that likely happened and gave shape to Penelope’s character.

“What started out as a 30-page memoir turned into a 160-page short novel. I am a ninth direct descendent,” Stout said.

Stout said the first time he heard the story was from his father when he was a child. According to a popular legend, Penelope is the central figure that claims she survived a ship stranding and deadly Lenape attack.

Mike Stout said his daughter became excited about the story but told him she thought Penelope was portrayed too much as a victim and not as the hero that she was.

“That stuck with me because I think we should recognize all of our heroes, especially women back in the early 1600s, colonial times,” Stout said.

The story of “Penelope” takes place in 1640. Penelope, who was 18 at the time, set out across the North Atlantic seeking greater freedom and opportunities. She survived relentless storms, disease, and a shipwreck. Upon reaching the shore of New Jersey, she was attacked by Native Americans and left for dead, the story goes.

Never questioning God’s will, Penelope survived by eating mushrooms and gum that grew from the hollow log for which she hid, and sipping morning dew from plants nearby. Seven days later she was discovered by the Lenni-Lenape. With a raised tomahawk above her head to end her life, an elder Native American intervened. He thought a woman who had the strength and endurance to survive such a tragic beating and harsh conditions was worthy of saving, according to Stout.

“Penelope’s story remains a source of inspiration 400 years later. It is a story that needed to be told,” he added.

Stout said it wasn’t until his girlfriend, Christine Pearson, discovered Penelope’s story while doing research on his family’s history that he first thought about writing the story.

“A half a year ago my girlfriend was going through my family’s lineage and she goes, ‘Are you aware of the story of Penelope? She, too, was excited about the story,” Stout said. “That’s when I said I needed to take this more seriously.”

That’s when Stout said the project evolved into a group collaboration of several minds coming together to give justice to the story of “Penelope.”

“The tie to Prior Lake is that six years ago I met a friend at Office Max in Savage. I was there printing a job and there was a poster of a Native American. It was a really intriguing poster and I asked who it belonged to,” said Stout. “The printing manager then introduced me to Dale Swanson, a local author, who owned the poster and happened to be in the store. The promotional poster was for his recently released book, titled ‘The Thirty-Ninth Man.’ He’s written several books about Native Americans in Minnesota and the history of colonial expansion, the warfare and conflicts.”

Stout said he became good friends with Swanson as he sought out his guidance.

“Reading Dale’s books and learning about the conflicts, I became really good friends with him and we still remain good friends,” Stout said. “I really leaned into him for his support, insight into early Native Americans and settlers and his editorial skills. I wrote this book with his guidance and inspiration. As the story progressed, I reached out to other local residents to get their input on the story.”

Stout then reached out to other close friends and Prior Lake residents Brady James, Barbara Fischer and Sheldon Bryant.

“Brady and I were neighbors. I reached out to him near the beginning. I sought his thoughts and opinions to seek an understanding of the book’s broad appeal. His feedback was very encouraging and a catalyst for my expanding the storyline,” Stout said. “Barbara and I became friends when I was providing pro bono services for Prior Lake’s Art Council. Barbara is an amazing artist whose work has been on display in local government buildings and small businesses. As the story was near completion, I sought her critical review to seek those areas where I could improve. Her critical review proved a motivating source to expand on the story.”

According to Stout, Bryant, a member of the Shakopee Mdewakanton Sioux Community, was an integral part of telling Penelope’s story.

“I met Sheldon years ago and have remained friends since. Sheldon is a member of the Shakopee Mdewakanton Sioux Community. He is a big supporter of the local community and has a passion for local arts, veteran related causes, and promoting local business,” Stout said. “I sought Sheldon’s opinion regarding the Native American perspective about the rapid colonists’ expansion and the ensuing conflicts. His thoughts and insights were of great value and incorporated into the story.”

–The self-published book can be purchased online at www.Penelope1622.com.

With the help of federal funding, Scott County is chipping away at a backlog of court cases stemming from the COVID pandemic.

When the COVID pandemic began and courts were essentially shut down outside of urgent matters, it created a backlog for county attorney’s offices across the state.

At one point, Scott County had over 500 cases that were deemed backlogged, Scott County Chief Financial Officer Danny Lenz said during a County Commission meeting Sept. 6.

As a way to try to solve the backlog, Scott County commissioners approved the allocation of about $1.4 million in funding for extra staff in the County Attorney’s Office.

“The vast majority of all those positions are really going to address the court backlog that materialized due to the pandemic,” Lenz said.

County Attorney Ron Hocevar and other officials said they feel that the plan has worked out so far, with the county down to just 10 backlogged cases as of Aug. 26.

REDUCING NUMBERSAs a way to reduce the number of cases, the Minnesota Judicial Council came up with benchmarks for counties to meet.

For example, one target was reducing the backlog by 20 percent every four months and keeping a 100-percent pace for all new cases.

But the biggest one was a deadline of having all backlogged cases completed by June 2023, which was accomplished almost a year earlier, Lenz said.

Lenz said that he has been told that the county and the judicial district are being looked at as a “model” by other counties. According to Lenz, currently about 1,250 cases are pending—388 of which are 12 months or older.

“With that full court backlog diminishing, this has become the focus of getting that 388 a little bit under control,” he said.

Hocevar was able to add two full-time attorneys, a victim witness assistant, a legal assistant, and a part-time law clerk to his staff. He noted that Scott County is one of the only counties in the state with a fully staffed county attorney’s office at this time.

“We didn’t get nearly the applicants we normally get when we post positions like that, but the applicants we did have were all top notch and I am extremely happy with the hires we got out of there,” Hocevar said.

FUTURE FUNDINGOne concern raised during the Sept. 6 commissioners meeting was how the positions would be funded in the future.

Lenz explained that the positions, along with another approximately $1.5 million in salaries for other county employees, was being funded from the federal American Rescue Plan through the end of 2024.

After that, commissioners must decide if they want to continue with the extra staffing. “We have built-in funding into our five-year financial forecast in order to incorporate and assume that we would keep these positions, but that is a decision yet for the board to make,” Lenz said.

Asked about that in an interview following the meeting, Hocevar said that he supports having the positions going forward but that it “remains to be seen” if it will continue after 2024. “I certainly believe that the numbers in my office justify keeping all these positions on,” he said. “We definitely have the numbers for it. We unfortunately have the crime for it.”

Hocevar pointed out that the office does more than just criminal law. It includes civil law, juvenile law, and other things like child protective orders. “We definitely have the work to keep all these people busy on a full-time basis,” he said.

Hocevar said that he also sees an increase in the seriousness of crimes across the county.

Asked to elaborate, he explained that it’s not just Scott County residents who are committing crimes. He said a number of entertainment venues across the county bring visitors from all over.

“We have to deal with them while they’re in the county and if they commit a crime,” he said.