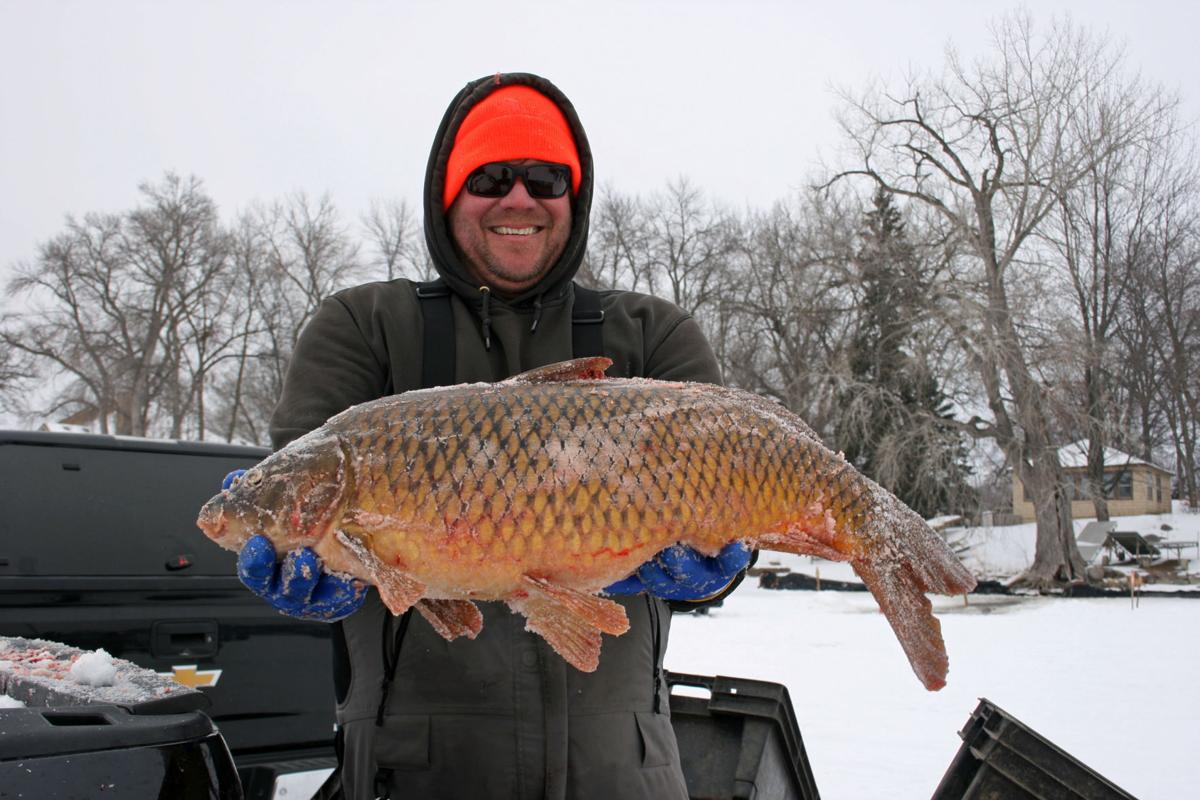 Commercial fisherman in the Bloomington District Jeff Morris assisted with the carp seine conducted in Upper Prior Lake on Jan. 29. Seines are conducted to improve water quality. 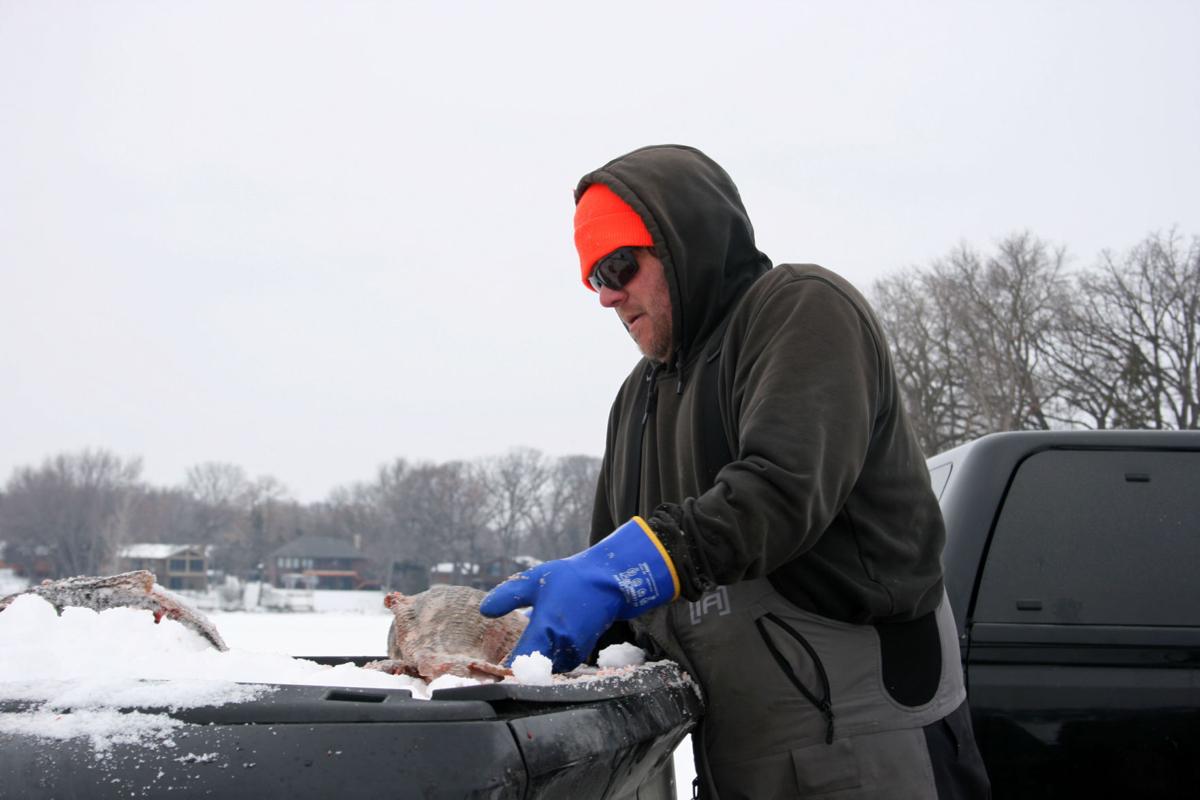 Jeff Morris, commercial fisherman in the Bloomington District, covers freshly caught carp with snow in the bed of his truck. The carp were caught during a seine and will be sold in the fishing market. 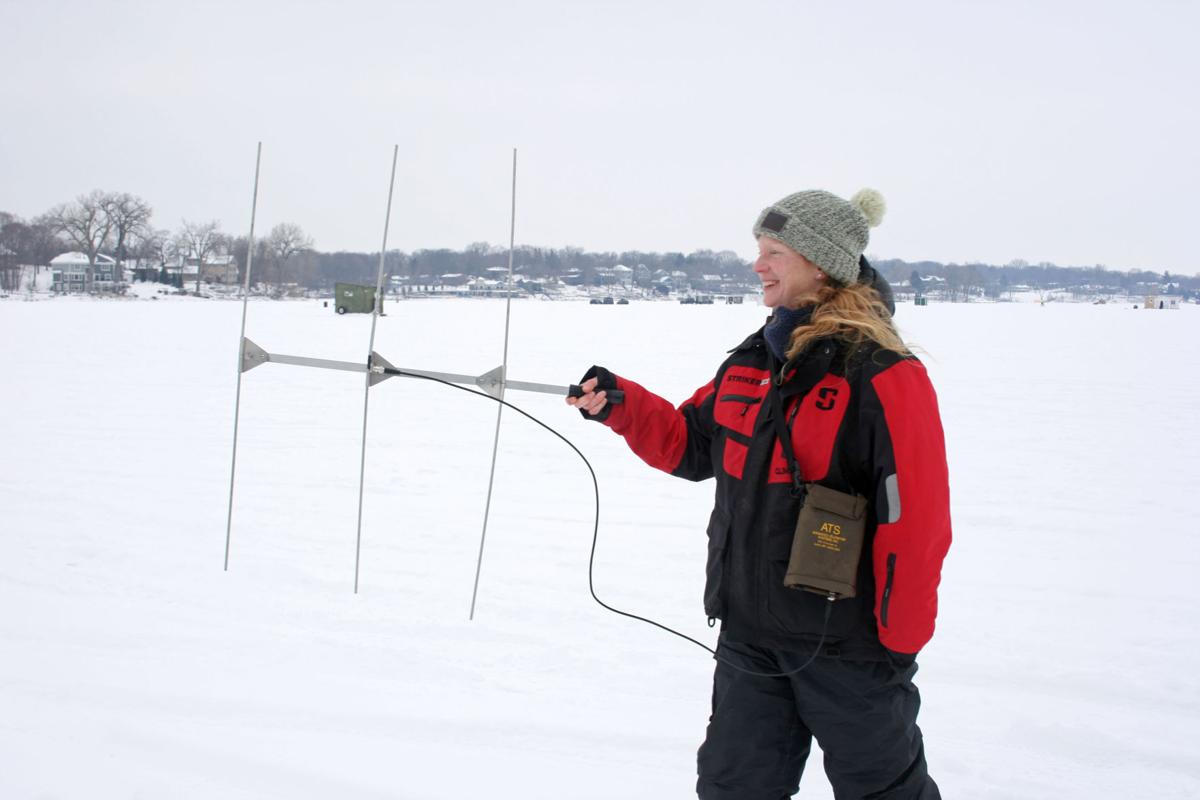 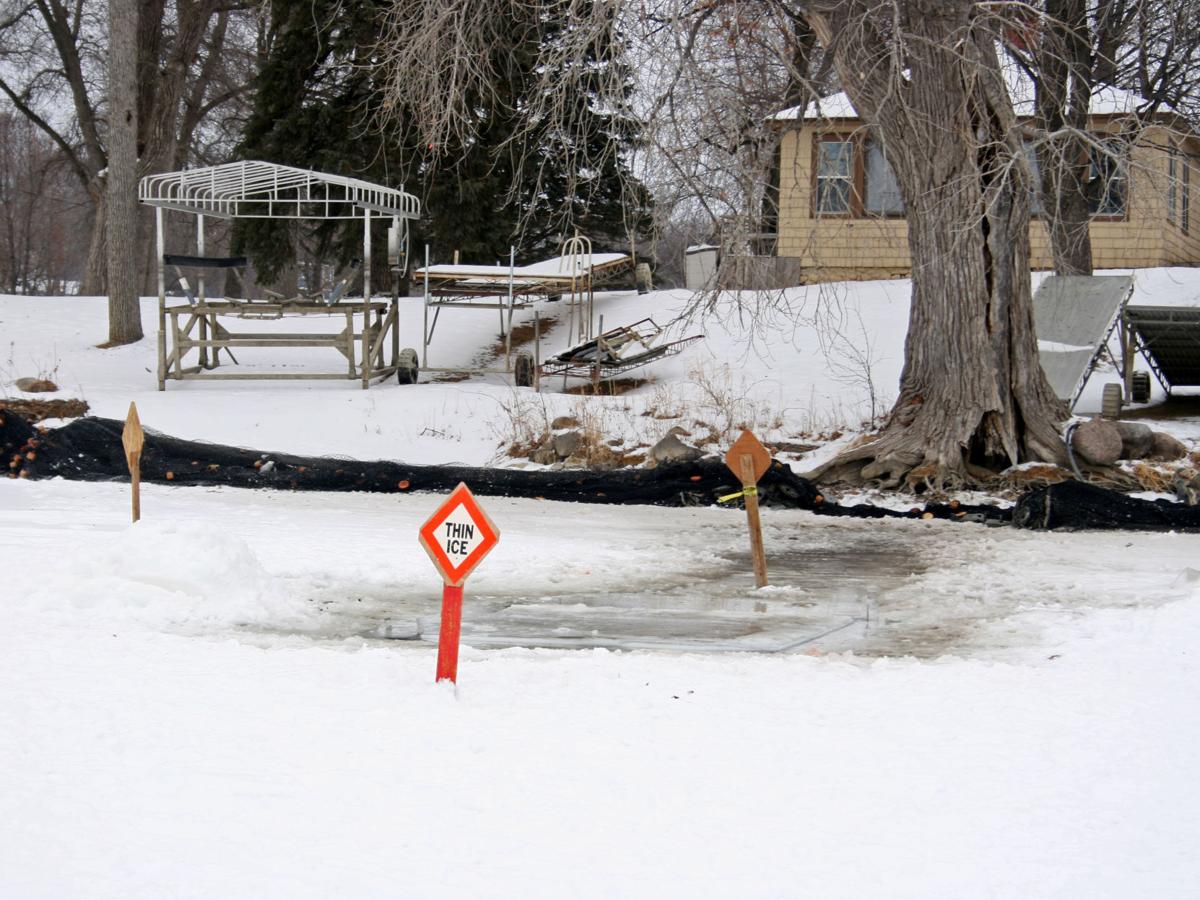 Scientists and fisherman carve a large out hole in the ice which the seine net is pulled through to capture invasive carp. 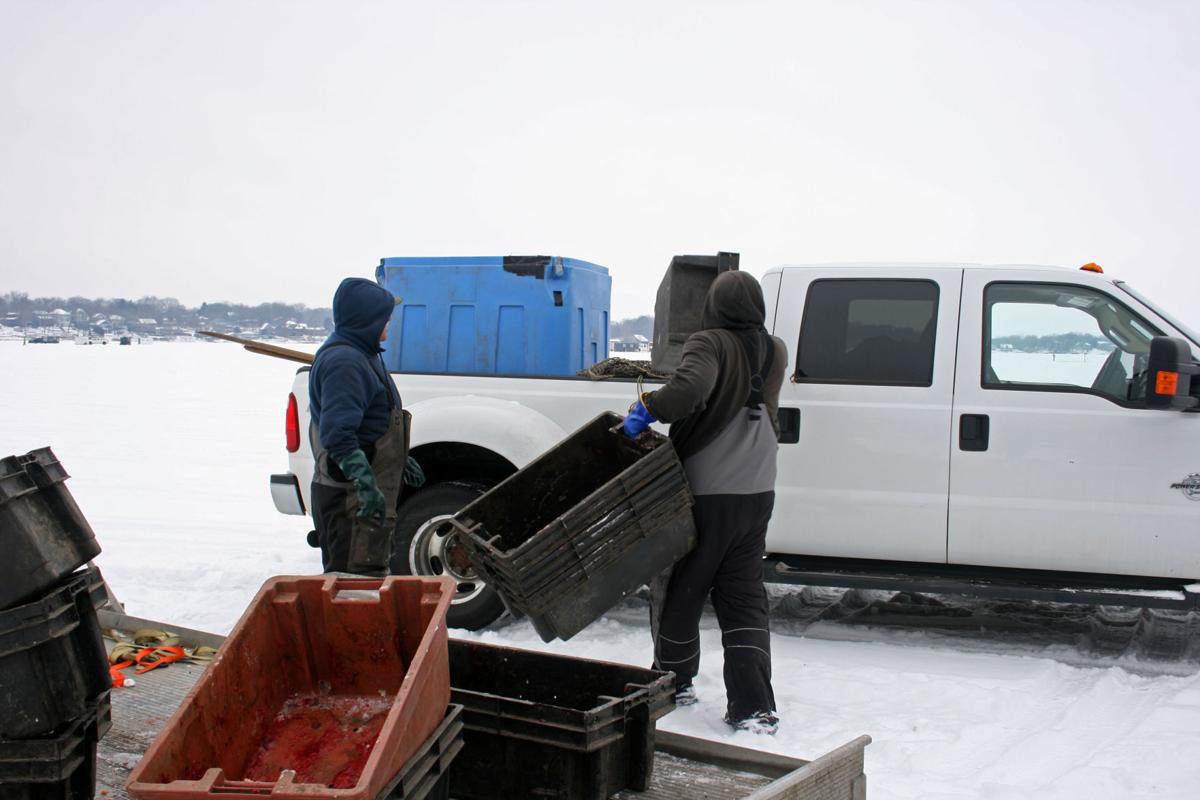 Area commercial fishermen load bins back into their trucks after a carp seine on Jan. 29 where they, along with the Prior Lake — Spring Lake Watershed District and WSB & Associates, removed approximately 2,300 pounds of the invasive common carp.

Commercial fisherman in the Bloomington District Jeff Morris assisted with the carp seine conducted in Upper Prior Lake on Jan. 29. Seines are conducted to improve water quality.

Jeff Morris, commercial fisherman in the Bloomington District, covers freshly caught carp with snow in the bed of his truck. The carp were caught during a seine and will be sold in the fishing market.

Scientists and fisherman carve a large out hole in the ice which the seine net is pulled through to capture invasive carp.

Area commercial fishermen load bins back into their trucks after a carp seine on Jan. 29 where they, along with the Prior Lake — Spring Lake Watershed District and WSB & Associates, removed approximately 2,300 pounds of the invasive common carp.

A total of 2,300 pounds of common carp were removed from Upper Prior Lake last week.

The Prior Lake Spring-Spring Lake Watershed District in partnership with consulting company WSB & Associates and area commercial fishermen conducted one of its many carp seines to lower the population of the invasive common carp in the lake on Jan. 29.

Carp feed on bugs and plant material which kicks up sediment and the phosphorus within it. Phosphorus feeds algae and results in more algal blooms in the lake. This prevents aquatic plants from getting sunlight and affects the feeding and hunting of the native fish populations, overall impairing the water quality of the lake.

In 2002, Upper Prior Lake and Spring Lake were among those on Minnesota’s List of Impaired Waters. In an effort to restore the water quality, the PLSLWD developed an integrated pest management plan to reduce the carp population in the impaired lakes.

“Prior Lake has an abundance of common carp that are detrimental to the water quality,” said Jeff Anderson, water resources technician with the PLSLWD. “The watershed has really ramped up efforts in recent years to try and remove common carp here.”

These efforts include carp seines which the district has been conducting with partners since 2016.

Seining is the use of seine nets to capture fish. A large hole is first cut in the ice and a net is dropped along with a small remote controlled submarine. The submarine pulls a rope that guides the net to a series of holes augered in the ice. The net forms a circular shape under the ice and around the aggregated carp. The net is then finally pulled through a larger out hole, explained Environmental scientist with WSB Mary Newman.

Seines are typically more successful in the winter months because carp tend to aggregate in one area making them easier to catch.

“We don’t really know the reason but I can tell you that they’re not really eating in the wintertime and they’re not breeding,” Newman said. “They’re from the Caspian Region, so it could’ve been that they had predators there so schooling up would be a way to avoid predators.”

Radio tags help the PLSLWD determine where the carp are aggregating in the lakes. Roughly a dozen carp have been tagged in Upper Prior Lake, Anderson said.

Once netted, commercial fishermen sort through the haul to ensure native fish such as walleye and sunfish are released.

The fish are then transported for processing and sold to markets in New York, Iowa and the southeastern U.S. where they will sell for 35 cents to 50 cents a pound in an average year sans pandemic.

“It varies based on how much fish are caught so obviously more fish, the bigger markets they’ll go to,” Anderson said.

The number of carp captured during seine events varies and in years past the district has captured between 10,000 and 35,000 pounds during a single event, so this year’s 2,300 pounds wasn’t what it had hoped for.

While the day “wasn’t a great success,” Anderson said, “Anytime we can get partners to come up here and work on getting the fish out of the lake it is a success.”

The commercial fishermen assisting with the seine were a bit somber as they packed empty bins into the beds of their trucks as they expected to have a larger haul for the market.

One reason for the small catch may be that the seine conducted in the narrows near Knotty Oar Marina seemed to spook the carp sending many away from the targeted aggregate, commercial fisherman for the Bloomington District Jeff Morris said.

“We know that there’s a good percentage in here. We can see them on our sonar but they kind of snuck out on us a little bit today.”

The carp in Upper Prior Lake gather at a depth less than optimal for seining, a gradual shoreline leads to more success, he said.

“It’s a tough lake to seine especially where they sit we can’t seine, so we try to push them into it with sound, underwater acoustics stuff like that and it works a little bit but sometimes they just swirl around and don’t want to come into the trap,” Morris said. “They’re hard to move, they’re stubborn and don’t want to come to where we can see them at.”

To capture the carp sneaking away from the seine nets, gillnets were set up in an adjacent area.

Gillnets are made of monofilament making them hard for fish to see. Fish swim into the net and become trapped in it by the gills when they attempt to back out of it.

While some may be concerned about the harm gillnets could cause native species the nets used had approximately seven-inch gaps, large enough to allow native species to pass through freely, Anderson said.

Gillnet permits were granted by the Minnesota DNR for Prior Lake and Spring Lake. They are the only two lakes permitted for commercial gillnetting in the state, he added.

Morris said there were no native fish caught in the nets during the seine and that the potential harm of the nets is outweighed by the benefit of removing carp from lakes.

After a successful carp seine, fishermen will see a sizable increase in game fish the following season, he said.

COVID-19 has “destroyed” the commercial fishing market, he said. “Period, flat out, it’s flatlining” and 2,300 pounds won’t yield a lot of return. But the seine does wonders for the fish population and quality of the lake.

“It improves everything all around for the native fish, for the water clarity, for the weeds,” Morris said.

The PLSLWD hopes to complete two successful seines on both Upper Prior Lake and Spring Lake this year with plans for a seine event on Spring Lake sometime soon.

“The watershed is working hard to help remove all the common carp and improve the water quality in our local lakes,” he said.

Seines are partially funded by a Federal 319 Grant and a Minnesota Board of Water & Soil Resources Watershed Based Funding Grant.