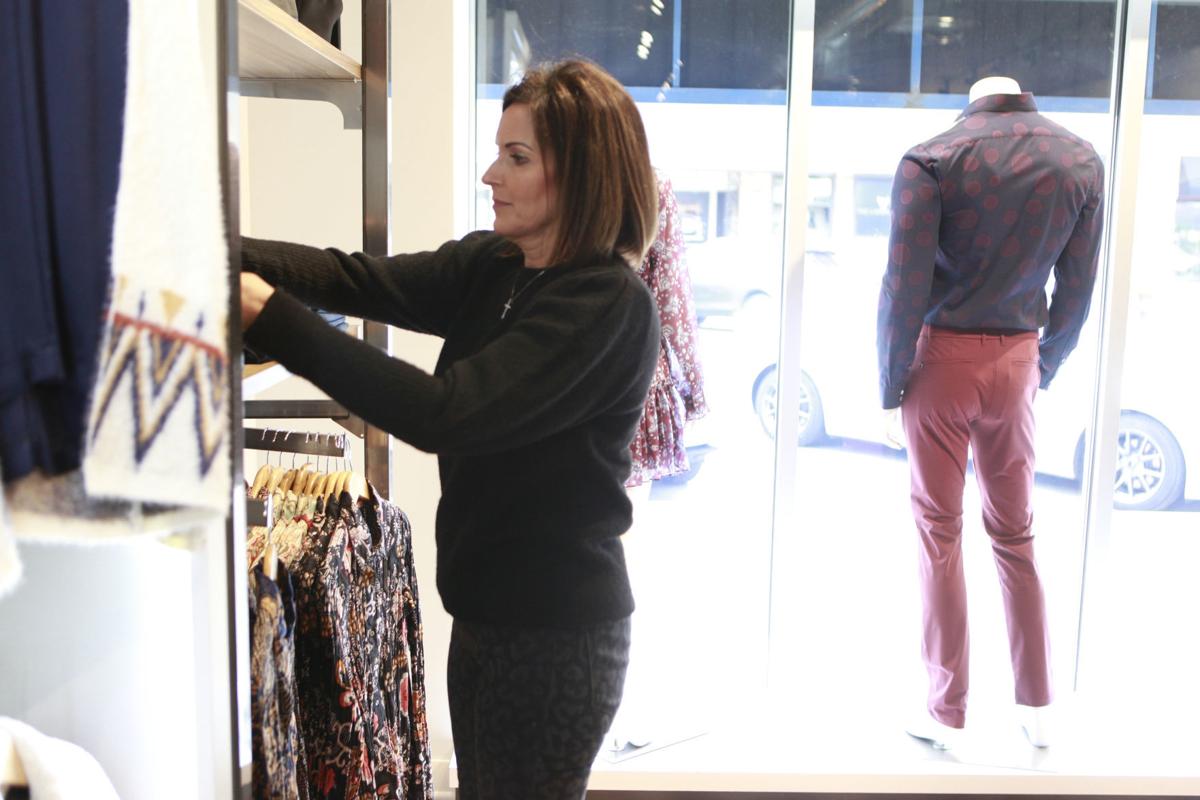 Danielle Collignon, owner of Lueur Boutique, arranges some of her wears in the new high-end clothing and home store in downtown Prior Lake on Thursday, Oct. 3. The shop opened last week even as roadwork has slowed business for several stores downtown. 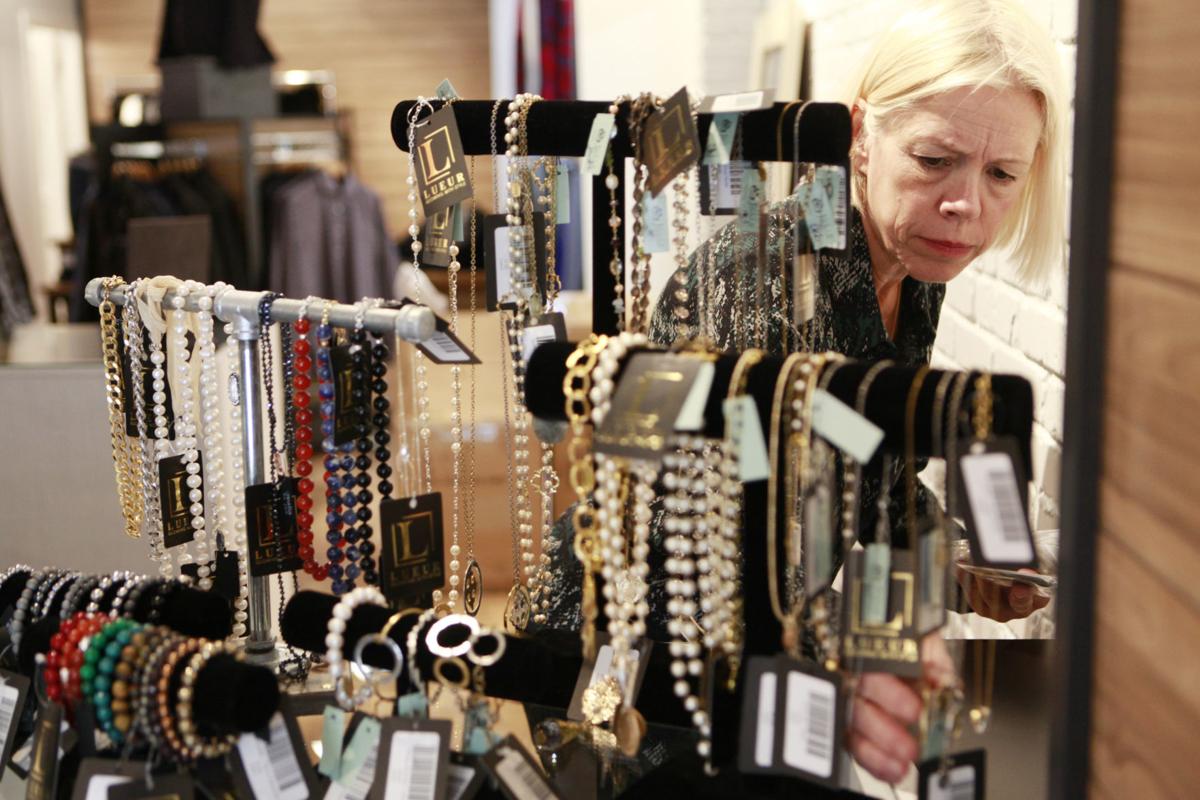 Stylist Pam Holme restocks jewelry at Lueur Boutique downtown on Thursday. Boutique owner Danielle Collignon said the city and Chamber of Commerce have helped businesses through construction season. “A lot of cities wouldn’t think twice about how this was going to affect their downtown,” she said.

Danielle Collignon, owner of Lueur Boutique, arranges some of her wears in the new high-end clothing and home store in downtown Prior Lake on Thursday, Oct. 3. The shop opened last week even as roadwork has slowed business for several stores downtown.

Stylist Pam Holme restocks jewelry at Lueur Boutique downtown on Thursday. Boutique owner Danielle Collignon said the city and Chamber of Commerce have helped businesses through construction season. “A lot of cities wouldn’t think twice about how this was going to affect their downtown,” she said.

Months of construction on highways 13 and 21 has created a maze of no-turn-signs and put parking spaces at a premium in Prior Lake’s business centers for months.

The number of customers happening to wander in has pretty much dropped to nothing as a result, several business owners said. Construction season has been a struggle for some, though they said they’re hanging on and counting on a stronger end of the year.

“Sometimes I notice it’s quiet in the store, so I go out and look on the street, and I don’t see anybody,” said Titima To, the owner of the Great Tea Road Company.

To’s specialty tea shop, nestled at the back of Prior Lake Professional Building and next to the building’s parking lot entrance, has easy access for residents heading downtown for an evening out. But To said residents are staying away over confusion over how to get in and around downtown.

“We noticed that after Labor Day our sales would kind of go down,” To continued. “But now, with the construction there, too, it’s super down.”

The slowdown has made the people who nonetheless come by week after week ever more important, owners at some businesses said.

“The nice thing is those who do come we know are intentionally coming, because there’s no easy way to get to us,” said Matthew Winter, manager at PLate restaurant.

PLate had been open for less than a year when dump trucks and plows showed up on its doorstep. Winter said it’s hard to gauge how much the project to revamp the city’s main thoroughfares has impacted sales. He said staff knew the construction wouldn’t make their first year easy, but they’re surviving.

The season’s road work should end by late November, city officials have said.

Lueur Boutique, a men’s and women’s high-end clothing and home store, opened on Main Avenue a week ago, owner Danielle Collignon said; the grand opening is set to begin Oct. 17. She had wanted to open a boutique for a long time and was optimistic about starting up, even as construction equipment rolls by a block away.

“Hopefully having a new store will actually help bring people down here,” she said Thursday.

Innovation on businesses’ part have been key to staying afloat.

At PLate they’ve done construction specials and discounted three-course dinners. Great Tea Road Co. has signed up for specialty trade shows to get their teas in front of a larger audience. Sweet Nautical Boutique has partnered with several other local retailers to host mutually beneficial events like an upcoming fashion show at Charlie’s on Prior for breast cancer survivors on Nov. 9.

Another part of the equation has been support from the city, Economic Development Agency and Chamber of Commerce. Mayor Kirt Briggs said the city learned some valuable communication lessons during a previous project on Duluth and Village Lake Drive project.

Briggs said the city has also encouraged businesses to increase their signs and helped organize community events like the recent Chalk Fest, which brought families downtown last month to cover the streets with some colorful creations. Jen Joas, co-owner of Lakeside Eats & Treats, said the event brought in their busiest Friday evening ever.

“I think this chamber is one of the best ones I’ve ever worked with, to be honest,” said Becky Leffler, manager of Sweet Nautical Boutique.

“I think everyone wants the best for us,” she added. “But we just need to connect with all the people that live here to let them know that if you want a downtown we got to get (shoppers) out.”

Leffler said that’s especially true in the coming months. October, November and December mark the fourth quarter for businesses. Leffler said it’s in these months that sales can make or break a business.

“We’re desperate for a really good fourth quarter,” Leffler said. “If the trend continues to be downward for the fourth quarter, it’s going to be significant for some people.”

The Prior Lake Chamber of Commerce’s website, priorlakechamber.com provides a list of area businesses, events and deals.