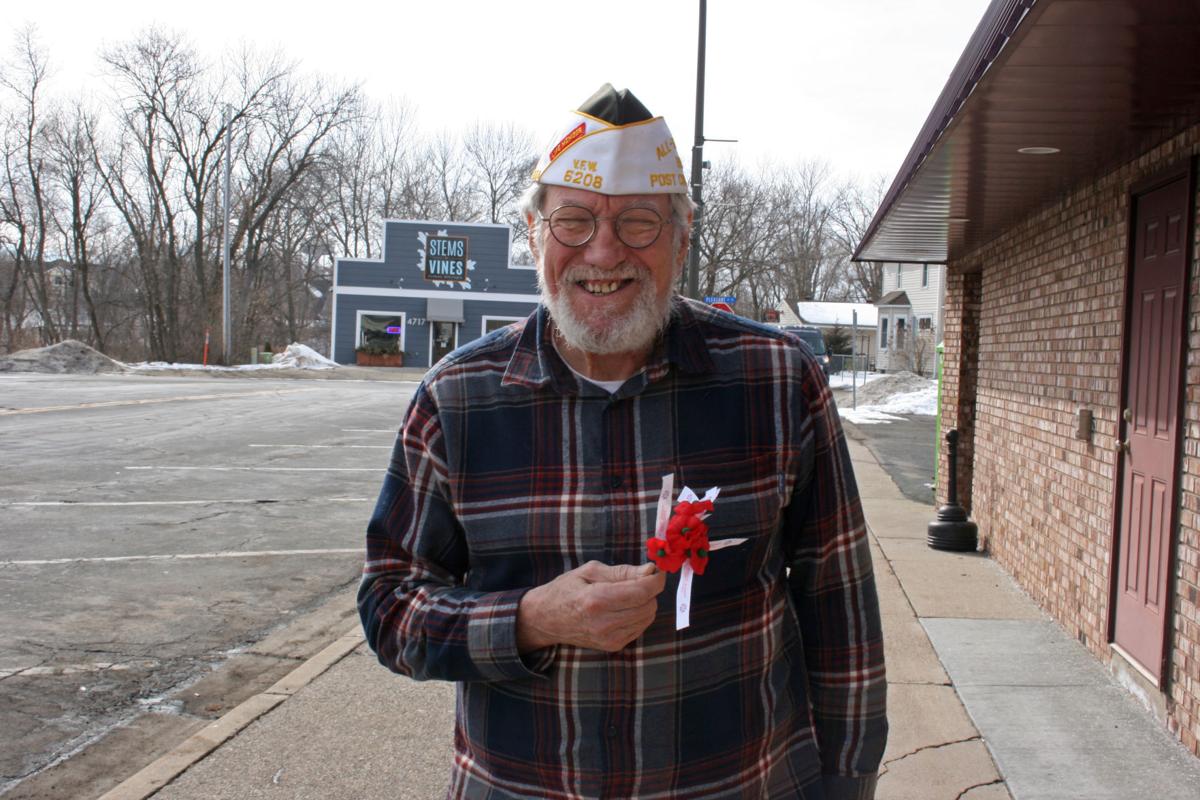 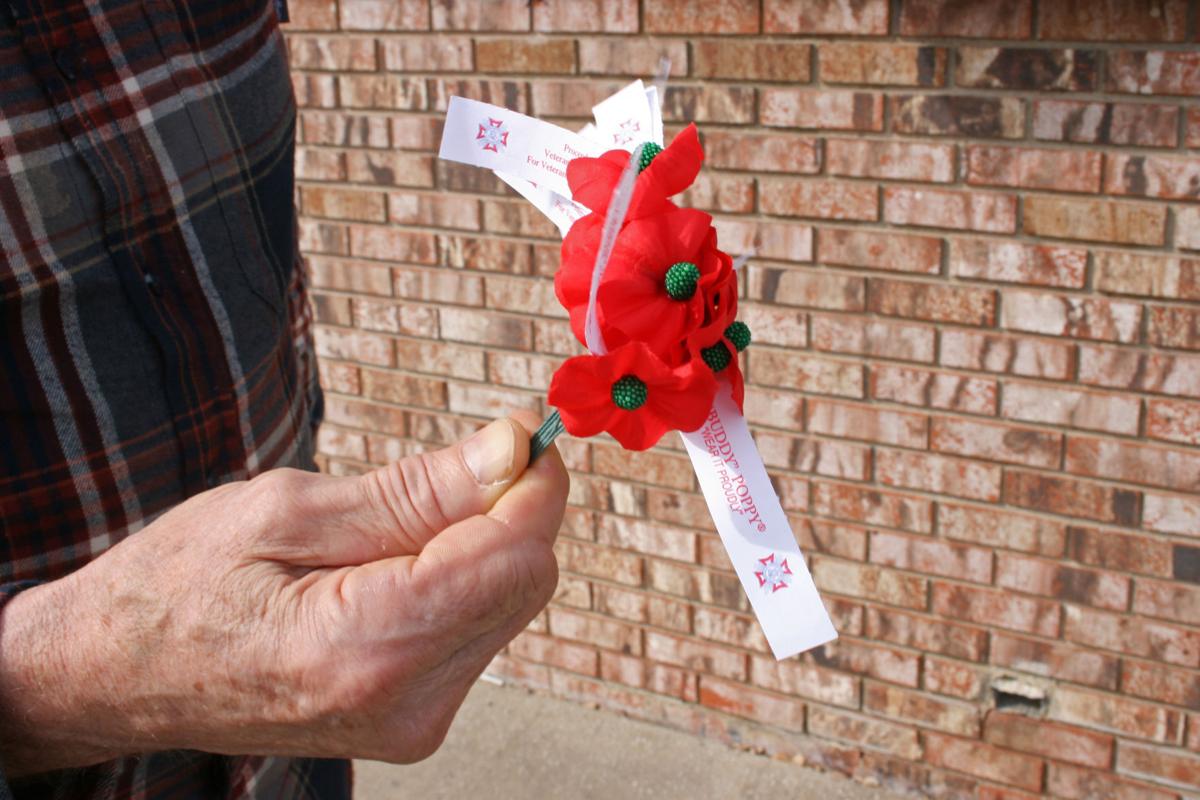 “Buddy” poppies are made by disabled and in-need veterans and inspired by the poem “In Flanders Fields” by Col. John McCrae. 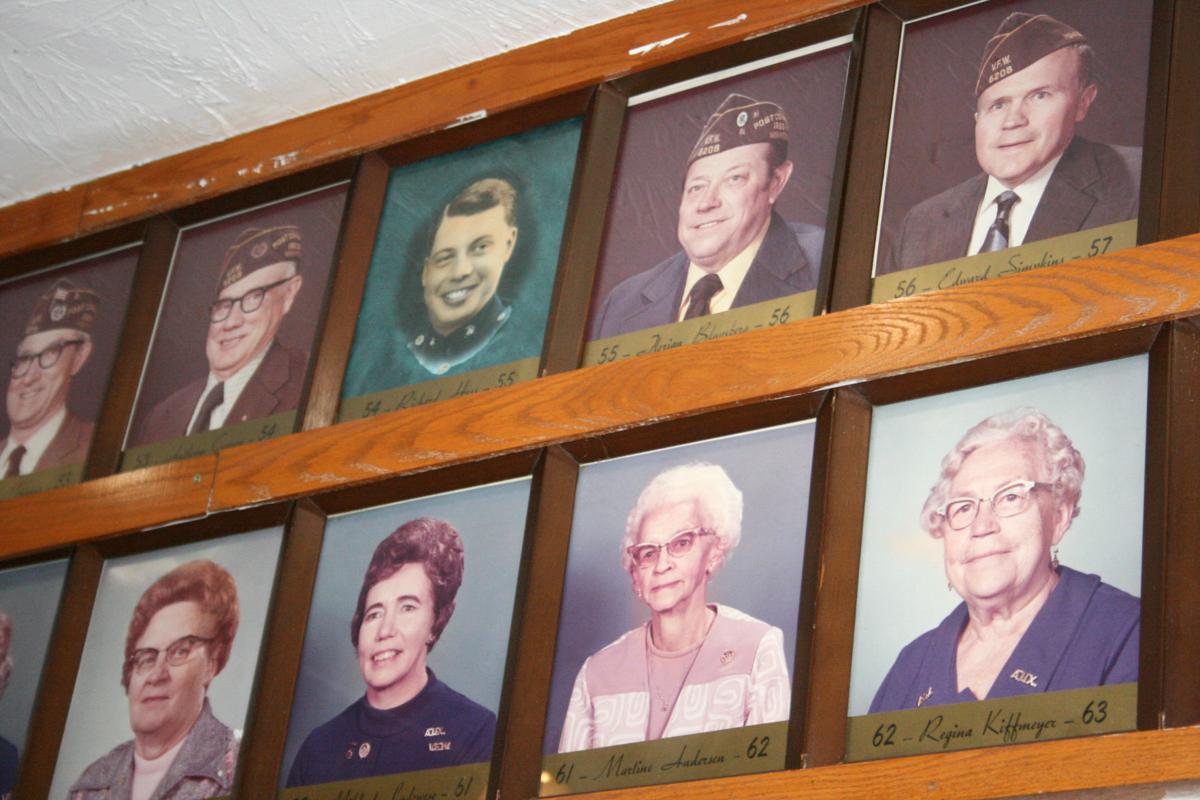 Portraits of Prior Lake VFW and VFW Auxiliary 6208 commanders line the wall above the bar in the post. The Prior Lake VFW post was established in February of 1946. 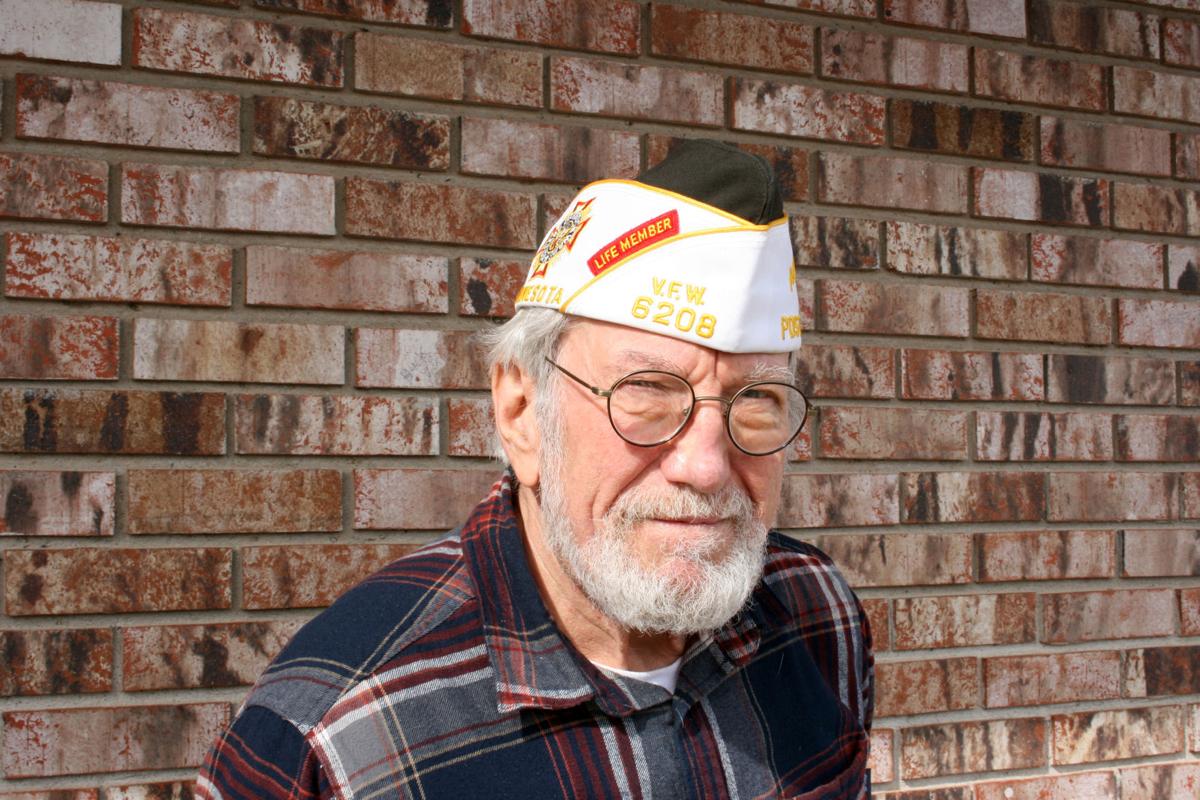 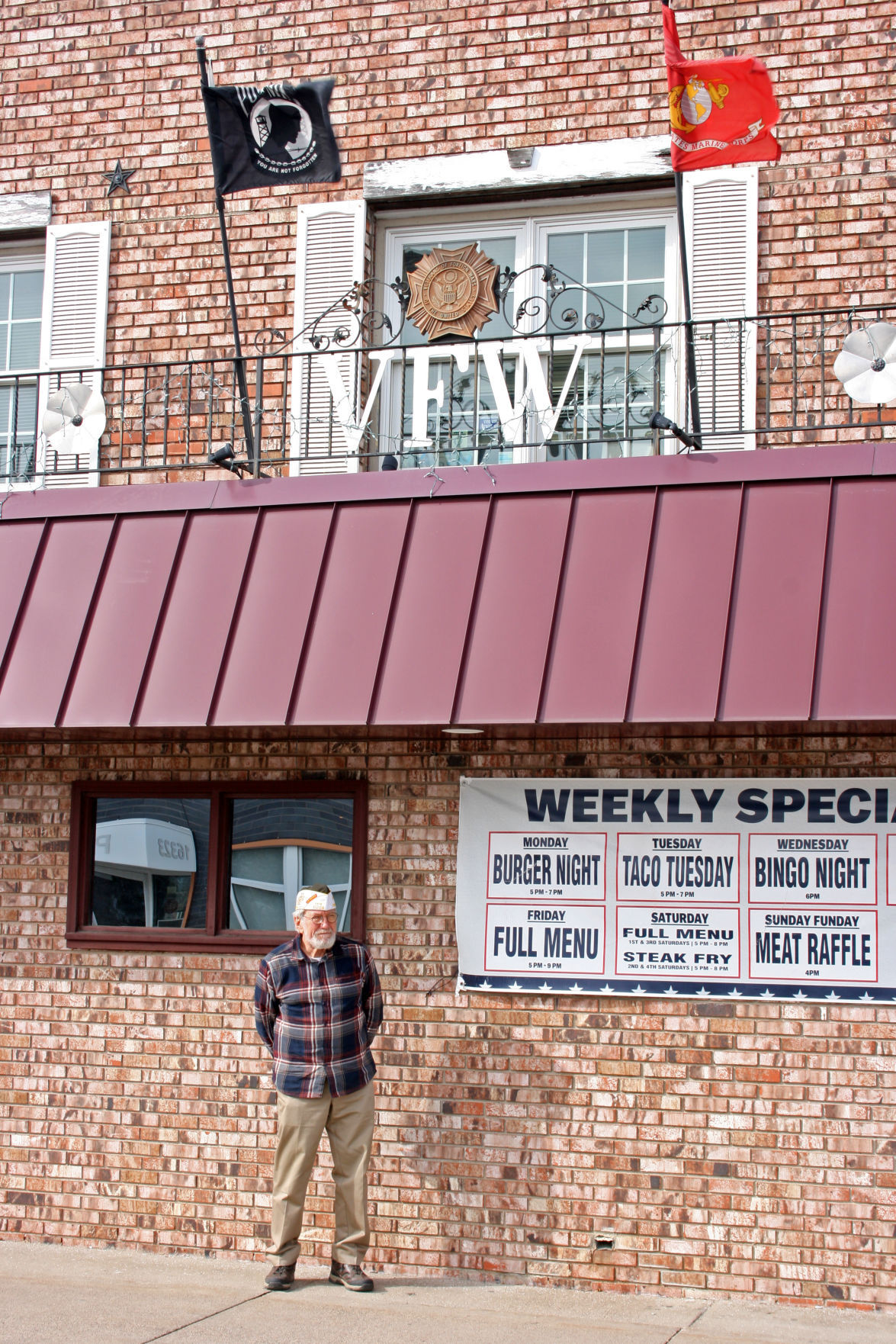 “Buddy” poppies are made by disabled and in-need veterans and inspired by the poem “In Flanders Fields” by Col. John McCrae.

Portraits of Prior Lake VFW and VFW Auxiliary 6208 commanders line the wall above the bar in the post. The Prior Lake VFW post was established in February of 1946.

Delicate red paper poppies are seen on lapels and in the hands of veterans and civilians around Memorial Day. They are symbols of remembrance for veterans who have lost their lives.

The flowers, known as “Buddy” poppies are ordered by VFW posts regularly and the donations received for them provide financial assistance for the disabled and in-need veterans handcrafting them.

This year, Ed Speiker, quartermaster and CFO of Prior Lake VFW Post 6208, had the pleasure of ordering 1,000 Diamond Jubilee poppies to commemorate the post’s 75th anniversary.

Local WWI and WWII veterans joined the VFW organization establishing a Prior Lake post on Sunday, Feb. 24, 1946. Their first meeting was held in the old village hall and then continued at the Westwood School, various members' houses and in the basement of Zorn’s, a local grocery store.

In 1960, the post purchased its current home on Main Avenue SE, which was formerly a theater. A new VFW post is tentatively scheduled to be constructed just south of the post’s current location as part of a multi-faceted city reconstruction project.

Speiker remembers walking into the post in 1960 with his father when he was just 10-years-old and it was still an old theater.

“Yup, I’m going to buy it,” he recalls hearing his father say, who too was quartermaster during his time.

Speiker’s been spending time at Post 6208 all his life. His father Anthony Speiker was a charter member of the Prior Lake VFW and his mother Leona Speiker was a charter member of its auxiliary, which formed just a few weeks after. His aunts, uncles and siblings were all involved in the VFW in some form. So when he gained eligibility after his time in the Marines, he couldn’t wait to join, Speiker said.

Membership over the years

Watching generations of veterans get involved with the VFW, Speiker’s seen a lot of changes throughout the years, but the sense of camaraderie among the crew has remained constant, he said. Veterans of WWI, WWII, Korea, Vietnam — each group was “supported wholly” by the last.

“It's a nice place for veterans to come. We don't sit around and tell war stories but we know that we have shared experiences with these people,” Speiker said.

Throughout the years local membership has shrunk.

“Our population is aging. A lot of the younger people don't really attend meetings,” Speiker said. “There's been a real strong effort to build back that membership. I think we went as low as 275.”

Membership currently rests at 305, but the post is hoping to see that number grow this year.

“We try to have events to pull people in, we’re struggling with it. I don't know the answer,” he said. “We’re hoping that with a new building that might be an incentive for younger veterans to become a part of the organization.”

Being a member also means serving your community. It’s a part of the VFW’s mission and in line with its motto “Honor the dead by helping the living.”

“We're committed to veterans, families of veterans, and the community in which we live,” Speiker said.

For Post 6208, there has been no shortage of community involvement over the last 75 years. Since its start, the local VFW has hosted holiday parties for local youth, sponsored boy scout troops, held various fundraisers, drives, events, provided honor guard services at the funerals of local veterans, and since 1947 they’ve been a part of Prior Lake Memorial Day events. They continue to host and be involved in community fundraisers and work with other local non profits.

“I think all the nonprofit organizations in Prior Lake make Prior Lake the outstanding community it is. From the Rotary, to the Optimists, the Lions Club and VFW and many other organizations just give that hometown feel, are able to connect with people, and provide services to the citizens without taxpayers support,” Speiker said.

“I'm very proud of what the VFW has accomplished in Prior Lake and very thankful for the appreciation that has been shown by the city, by the school district, by other organizations…” Speiker said. “Everybody does what they can to support the VFW and it's a good feeling to be part of that.”

He hopes the post will also be able to hold a celebration at some point this year to commemorate 75 years. The veterans weren’t able to hand out poppies last spring due to the ongoing pandemic, but Speiker’s hopeful they’ll be able to this year and there’s 7,000 poppies and 1,000 Diamond Jubilee poppies ready when the time comes.

“We’re hoping that with a new building that might be an incentive for younger veterans to become a part of the organization.”