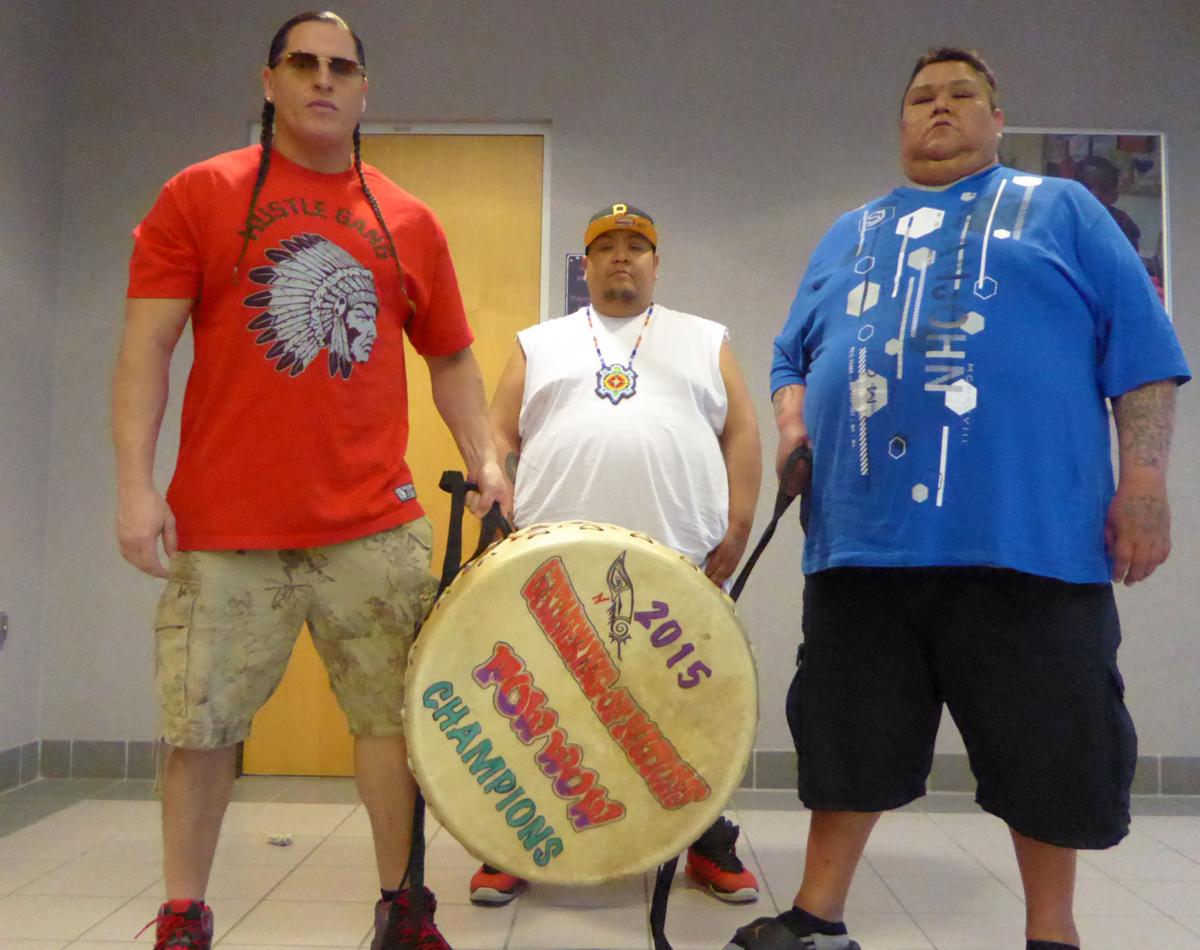 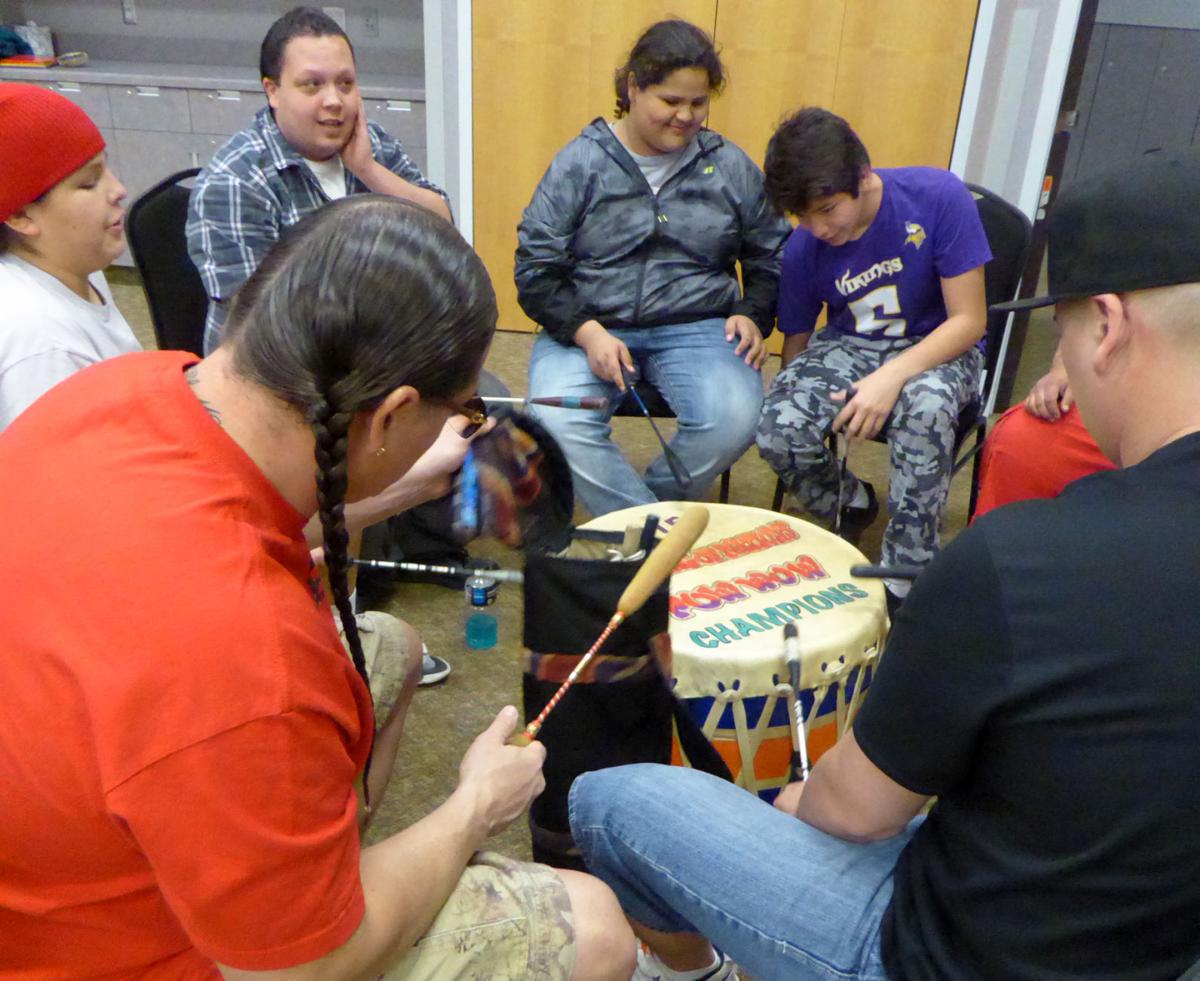 Members of Iron Boy circle up with community youth for a thunderous song on their championship drum.

Members of Iron Boy circle up with community youth for a thunderous song on their championship drum.

I f you’re standing anywhere nearby, it’s impossible not to hear Iron Boy in the middle of a song. The members of the Prior Lake drum circle belt out traditional Native American music with a force that resonates in the rib cage and the stomach, pounding a single drum and singing in unison at the top of their lungs. The vibrations alone are dizzying.

They were preparing for a weeklong trip to Albuquerque, N.M., where they’ll participate in the 33rd annual Gathering of Nations powwow starting April 28.

Iron Boy will compete at a powwow every week during the summer season, but this is the big leagues.

The Gathering of Nations is expected to see over 3,000 indigenous dancers and singers from more than 700 tribes in the United States and Canada. Iron Boy will be one of 30 or so drum groups competing there.

“We’re just blessed,” Crowfeather said. “That’s all I can say. We’re humble to have been chosen.”

The members of Iron Boy are less concerned with winning than they are with having the privilege to participate in the Gathering of Nations at all. The event was conceived three decades ago as one gigantic celebration, where Native people can come together, share culture and engage in true, spirited competition.

“It’s just being around a bunch of other Natives from all over the place, making music and making people dance,” Pelly said.

And when he is singing and drumming:

“It makes me feel good,” he said. “All my troubles and worries go away.”

“Wherever they need singers, we’re there,” Crowfeather said.

In his spare time, Crowfeather involves himself in the community in other ways. He’s a motivational speaker for high school-aged kids, and he does cultural presentations to counteract stereotypes against Native Americans. He’s also studying to become an addictions counselor. He’s just one internship away from completing his training.

Meanwhile, Garvin helps with community youth, teaching them how to sing and sit around the drum. He led a drum circle at the Dakotah! that Wednesday night while young children practiced traditional dances.

“I love to do this because I love singing. I love the powwow. I love the tradition. I love being Native,” he said.

The name “Iron Boy” has its own significance for its members. The group was named for Marlin Dickenson Sr., Crowfeather’s older brother and a champion singer in his own right.

“He had named the group,” Crowfeather said.

His Lakotah name had been Ironwood Creek Boy, which he’d shortened to Iron Boy. Dickenson fell ill and passed away in 2003, and Iron Boy kept his name to honor him.

But Iron Boy also means something to the larger community — among them Charlene Vigil, activities coordinator at Dakotah! Sport and Fitness.

“It was right around 2010 when we started hearing about Iron Boy — they were everywhere after that,” she said.

It’s difficult for Vigil to explain just what Iron Boy means to her and her family.

“My husband is a welder,” she began. When they started to hear more and more about Iron Boy, she said, it “gave him the courage to be an iron man.”

“These names — people think they’re insignificant,” she said. “But they have power, these drums.”

The members of Iron Boy have remained humble about their chances of taking home another first-place trophy. They way Garvin sees it, they’re going down there to sing. Whatever the judges decide is out of their control.

The whole point of the thing is the music.

The 33rd annual Gathering of Nations takes place in Albuquerque, N.M., April 28-30. Anyone, Native or non-Native, can participate in the celebration.

To learn more about the Gathering of Nations, visit http://www.gatheringofnations.com