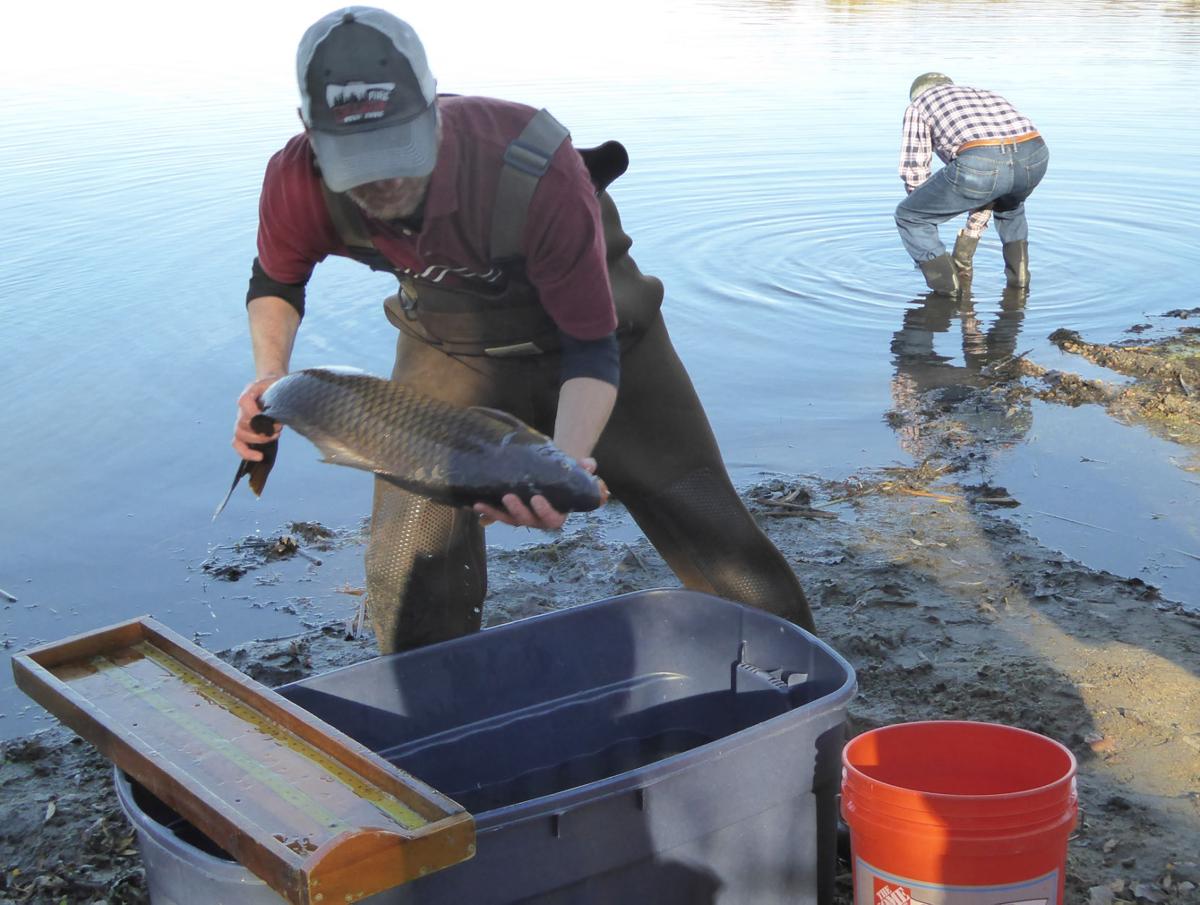 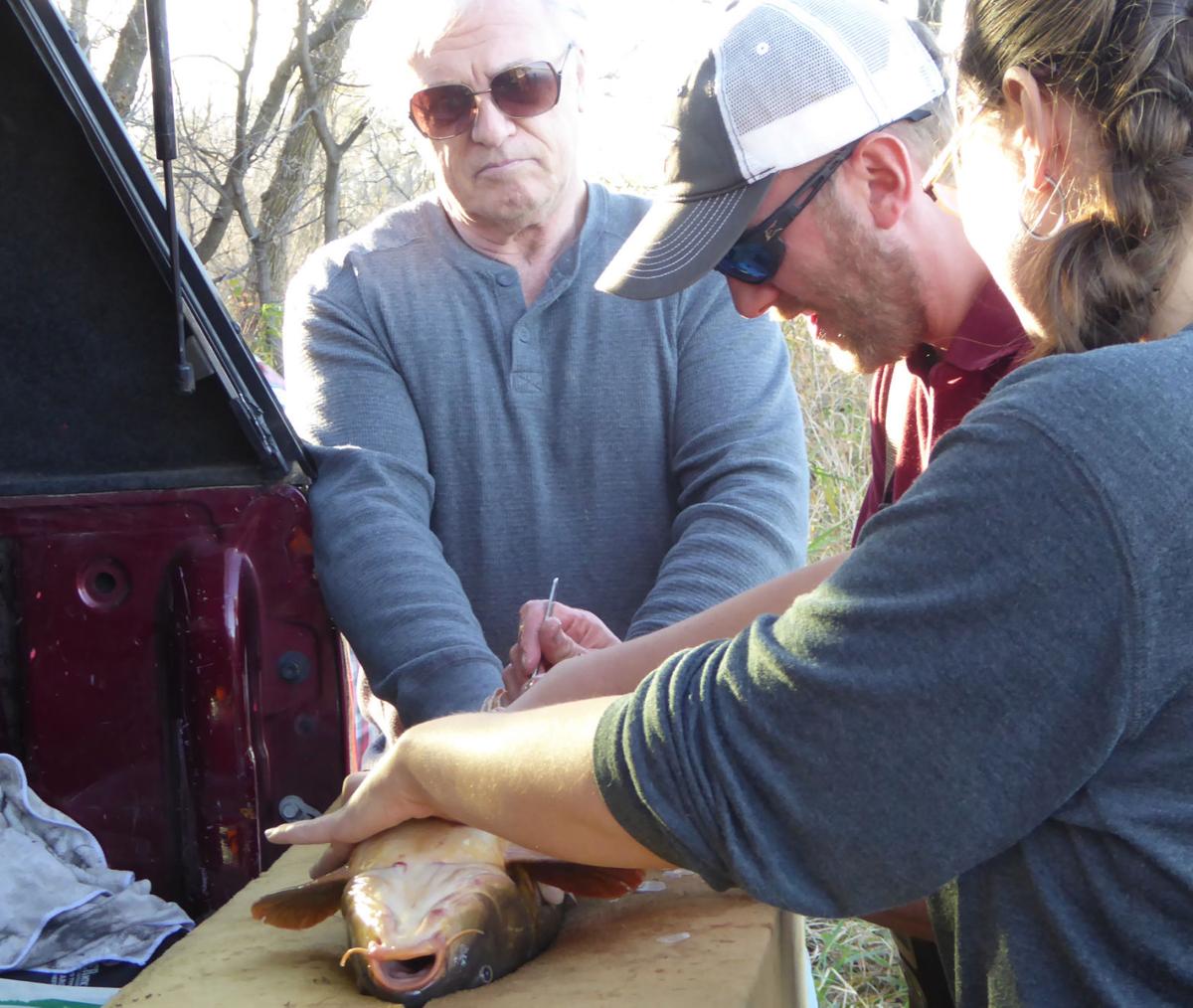 If you’ve never seen a fish getting surgery on a tiny operating table in the back of a truck before, congratulations — now you have. 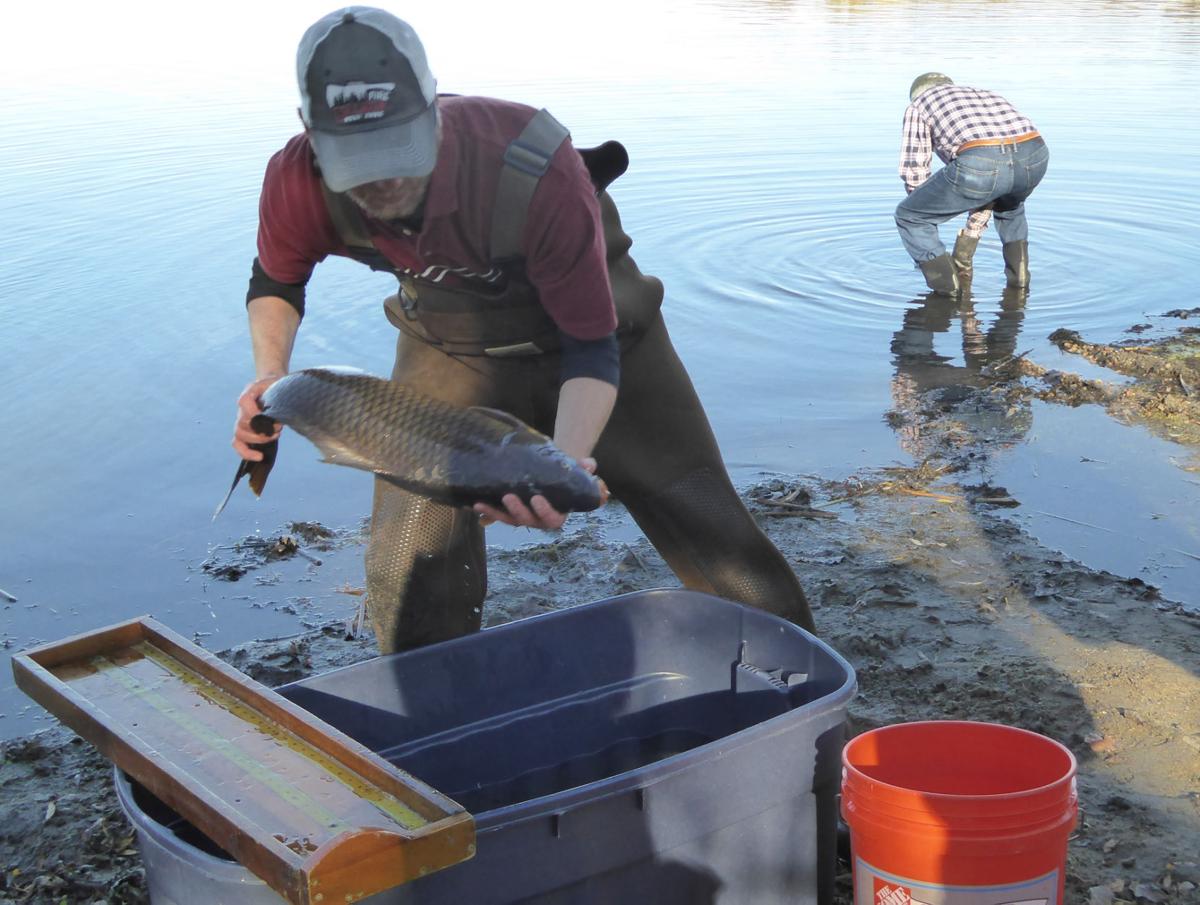 If you’ve never seen a fish getting surgery on a tiny operating table in the back of a truck before, congratulations — now you have.

Tony Havranek hoisted a dripping, 26-inch carp from a plastic bin at the Spring Lake access point. The fish lolled in his arms; the water in the bin was tempered with a healthy splash of sedative.

Then he placed it in a foam block sitting in the back of a truck and took out his surgical tools. The senior environmental specialist for WSB and Associates has been operating on carp for about seven years.

“The time goes by quickly,” he said.

But seven years is long enough to get a deft hand at fish surgery. A quick incision and a peek beneath the armored pelt of the carp could tell him whether it was a male or a female. All the while, he called instructions over his shoulder to a few volunteers who were swishing some half-sedated fish in the water, reviving them after their own procedures. Eventually, they would drift away, swerving a little from grogginess and shock, disappearing from sight.

Havranek was actually installing a small radio tracker in each of the fish — a device shaped like a medicine capsule about the size of a piece of gnocchi. With their new hardware installed, the carp will find their family groups and act as a beacon.

That’s the point of the whole project: to track the carp’s movements. About 30 adult carp will be fitted with trackers in Spring Lake and Upper and Lower Prior Lake over the course of the next three years. The next step is to calculate the approximate population of the fish and their migration habits.

Then, when it’s understood just how many carp there are in the three lakes and where they’re most likely to congregate, the Prior Lake-Spring Lake Watershed District (PLSLWD) can start seining the lakes and catch large numbers of them in one fell swoop.

“Success would be removing a large percentage of the carp,” PLSLWD Water Resources Project Manager Maggie Karschnia said. They’re not under any illusions that they’ll get every single one.

Carp are an invasive species that were brought over from Europe and Asia in the 1880s as game fish. They’ve since overpopulated and overrun Minnesota’s freshwater ecosystems. But the big, tough, wily fish isn’t the PLSLWD’s main quarry. They’re actually more concerned with catching phosphorus.

In 2002, Spring Lake and Upper Prior Lake were listed as “impaired” water bodies by state pollution standards, and Lower Prior Lake — downstream and vulnerable — has demonstrated troubling murkiness in the summer months from algae buildup. It was found in 2012 that roughly half of that pollution comes from internal loading, originating from pond weed and, yes, carp.

Carp are bottom feeders. All that rooting around stirs up the muck at the bottom of Spring Lake and Upper and Lower Prior Lake, which releases phosphorus back into the water. The phosphorus in turn feeds hungry algae, which forms a scummy, smelly layer on the surface. Success, Karschnia said, is really more about how many pounds of phosphorus they can remove from the system.

The carp management project was made possible by a grant from the Clean Water Partnership Grant Fund through the Minnesota Pollution Control Agency. The PLSLWD is spending $134,655 over the next three years — with the grant footing half of the bill — on tagging and bagging carp.

The PLSLWD has done carp removal projects like this one before, but have never gone in with the level of information they will now. After they track the fish to a concentrated location, they’ll remove debris and rocks that could break seining nets and install fish barriers to block carp from entering spawning areas.

Havranek finished up on the 26-incher — the last fish of seven he tagged in Spring Lake that day — and had a volunteer cart it off to the water to revive it. From there, he’d go on to do four more in both Upper and Lower Prior Lake. Not everyone can install radio beacons in carp, but the public is being asked to help in this endeavor. When it finally comes time to remove the carp, the PLSLWD will need volunteers to mark, count and sort the fish. There will also be an educational component to the project when the PLSLWD hits local schools for classroom presentations on Nov. 12.

But the biggest thing the public can do is to be careful. Curt Hennes, president of the PLSLWD, is asking fishers to look out for carp with tagged fins.

“If any of these fish are caught, don’t destroy them,” he said. “Just throw them back.”

It may seem like a merciful act at first, but what those dizzy, post-op fish don’t know is that they’ve inadvertently turned traitor. After years of non-competition and easy lunches, carp have a natural enemy. One that knows where they live.