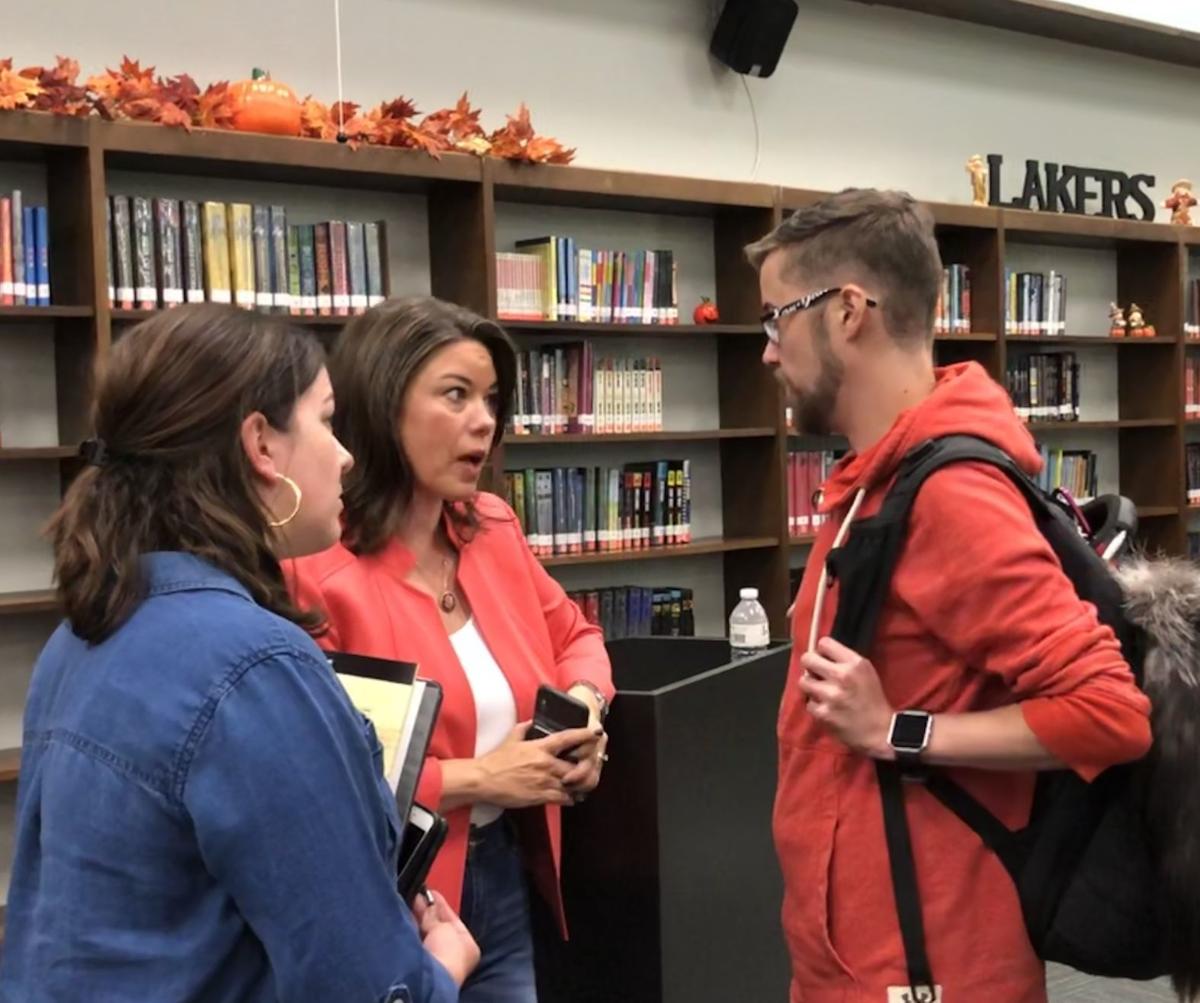 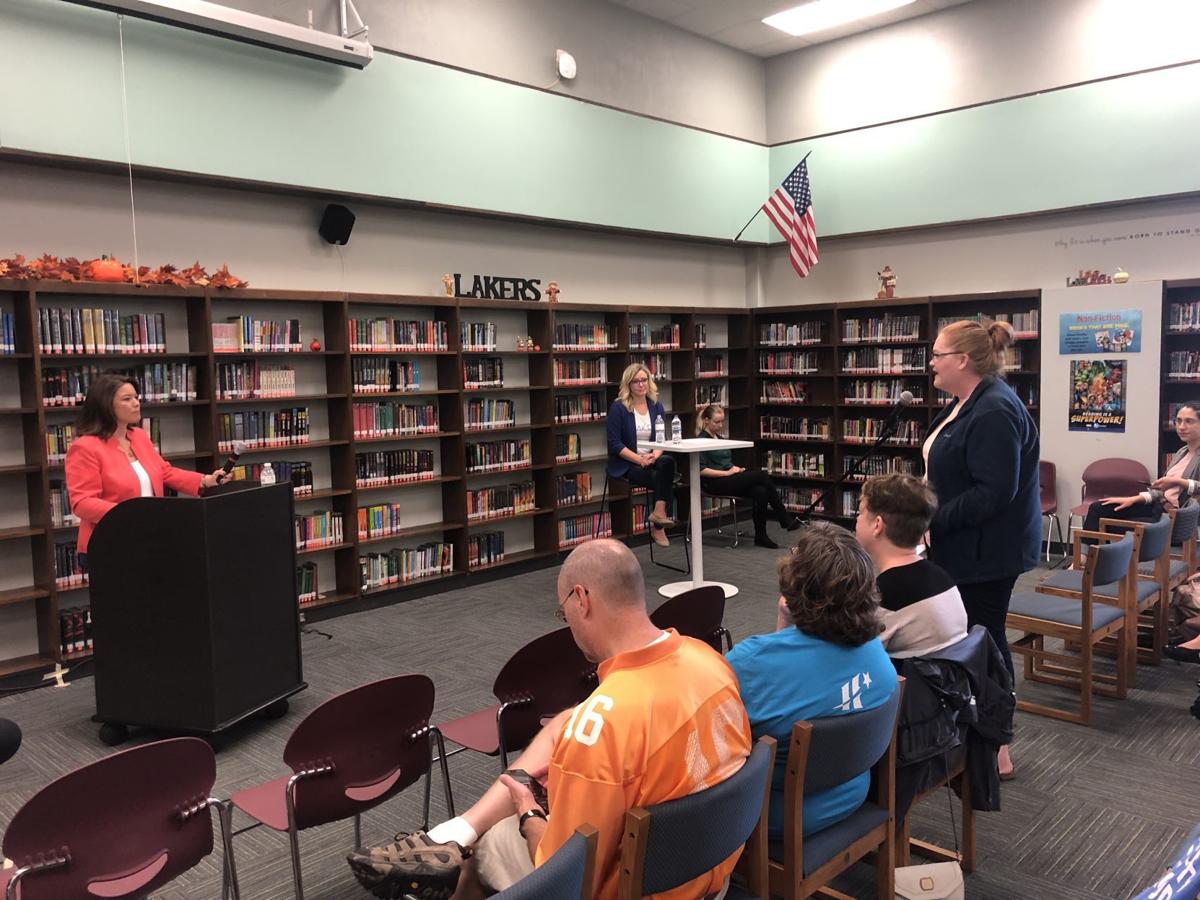 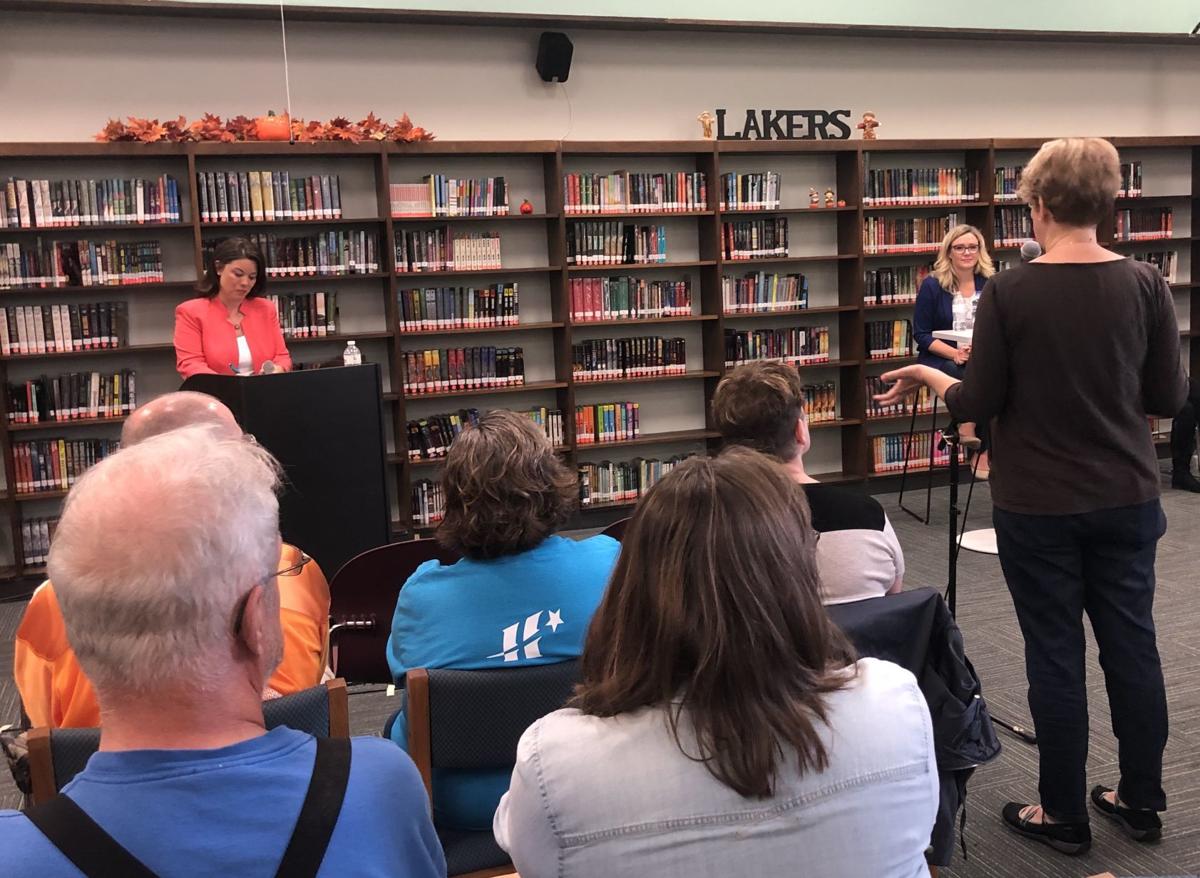 Prior Lake Savage Area School Board member Michael Nelson asks Craig about what she and her colleagues can do to improve school funding.

Prior Lake Savage Area School Board member Michael Nelson asks Craig about what she and her colleagues can do to improve school funding.

Teachers and school officials in Prior Lake are looking for ways to improve school finances, teacher pay and the achievement gap among students. When Congresswoman Angie Craig, D-Minnesota, came to a local middle school Saturday, they wanted to know how she was helping.

Craig spent an hour-long town hall event in Twin Oaks Middle School talking about a variety of topics including the trade war, prescription drug prices, climate change and impeachment, but education issues rose to the top.

Hidden Oaks Middle School math teacher Tanya Schaper said things have changed over her 22 years of teaching. Standardized testing has crept ever further into her classroom, to the point where this year Schaper said “15% of my instruction time is watching kids take standardized tests.”

“Which is a bit insane,” she added.

Schaper asked what Craig was doing to untangle school funding from the growing number of assessments.

Craig said the uptick in testing started by No Child Left Behind did little to improve the achievement gaps the tests found.

“I don’t believe more standardized tests are going to help us produce more successful children; in fact, I think it pushes us backward,” Craig said.

Craig asked for the public’s support of the Individuals with Disabilities Education Full Funding Act, which would increase government aid for special education.

According to the Minnesota Legislature, Minnesota has a $800 million funding gap as a result of the difference between federal money for special education programs and what those programs actually cost. The federal government has covered less than 8% of the programs but committed to provide up to 40%.

Craig said the gap affects all students and taxpayers because districts need to ask for operating levies to ease the financial strain, forcing districts to cut new teachers or find cuts elsewhere.

“This isn’t just about kids with special needs,” Craig said. “I truly believe that IDEA full funding is the key to making sure that we can stop all these cuts in these schools.”

Hidden Oaks global studies teacher Lorinda Welch asked Craig what she was doing for educational funding for teachers’ wages. Welch said she’s seen many of her colleagues leave the profession after years of hard work and training because they can’t keep up with the growing costs and additional jobs required to reach a livable income.

“There’s not a teacher shortage,” Welch said. “There’s a lack of people who are willing to work under the extreme, difficult, micromanaged conditions, and we are losing extremely amazing talented people because they just can’t afford to do this job.”

Craig, whose mother raised her and her siblings as a single mom and teacher in Arkansas, called the amount teachers have to spend to meet classrooms’ basic needs “abominable.”

She said she supports a bill that would double teacher’s tax-eligible deductions for out-of-pocket expenses and said she’d be in favor a of tax benefit or better loan forgiveness program for teachers.

Craig repeatedly touted the benefits of legislation like the IDEA act and the Protecting the Right to Organize Act — a labor bill she supports that protects the right to collective organizing and bargaining. But she didn’t have a legislative response to all of the educational concerns voiced at the town hall.

One former teacher and resident asked Craig what she was doing to close the education and achievement gap for students of color. Craig recognized the existence of racial disparities “in almost every sector” and said she would work on studying the issue.