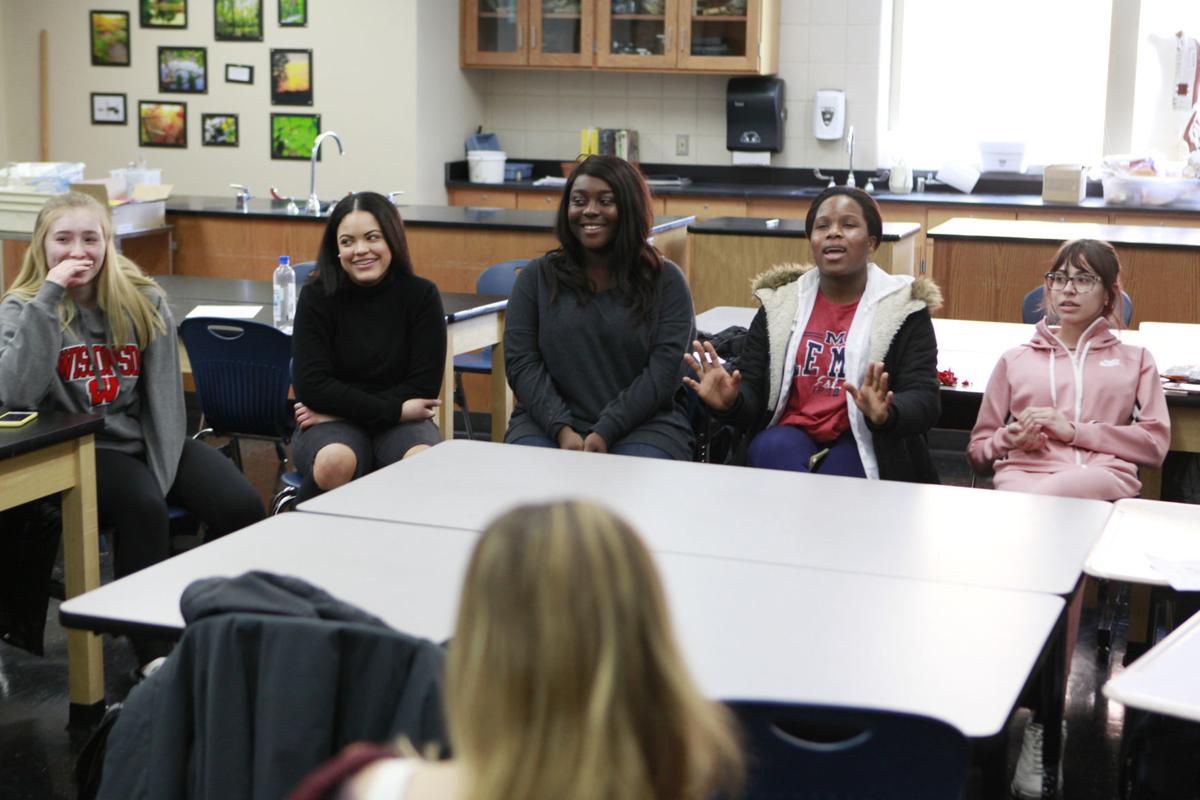 Ezinne Osuji, in red, and other members of Prior Lake High School’s new Embracing Controversy club discuss racism, affirmative action and other related topics during a club meeting Monday, March 4. The club’s meant to give a non-hostile forum on controversial topics. 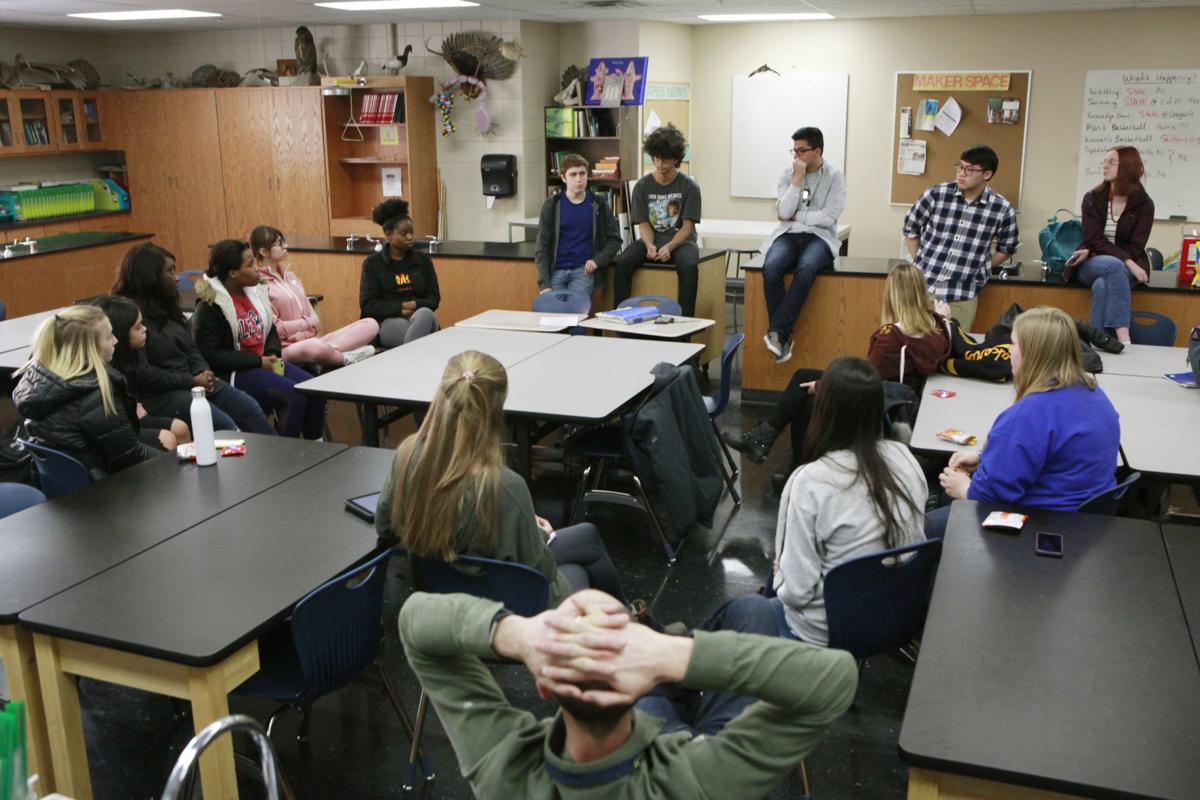 Prior Lake High School science teacher Sam Steinberg, lower center, observes as members of the Embracing Controversy club share their thoughts and experiences on race during a meeting Monday, March 4. Other topics for the club include abortion and health care. 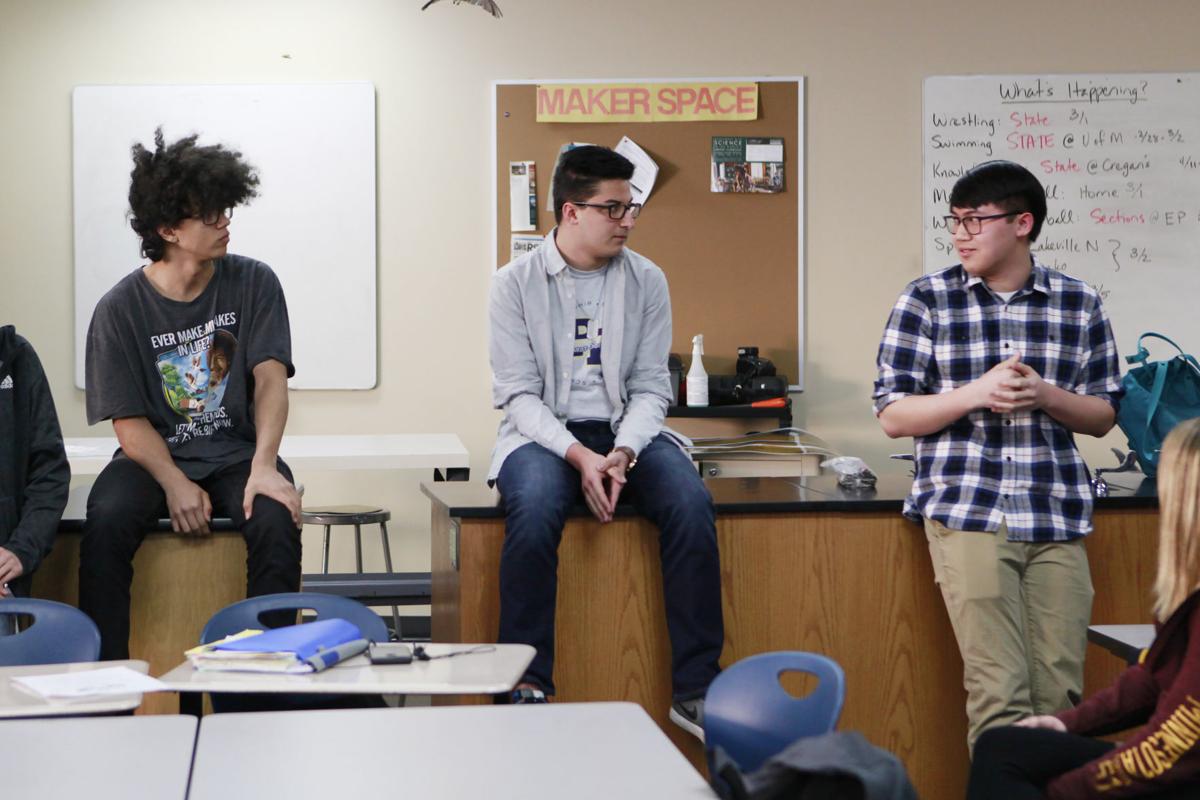 Ezinne Osuji, in red, and other members of Prior Lake High School’s new Embracing Controversy club discuss racism, affirmative action and other related topics during a club meeting Monday, March 4. The club’s meant to give a non-hostile forum on controversial topics.

Prior Lake High School science teacher Sam Steinberg, lower center, observes as members of the Embracing Controversy club share their thoughts and experiences on race during a meeting Monday, March 4. Other topics for the club include abortion and health care.

Various animal skulls stared blankly from the top of cabinets in a science classroom at Prior Lake High School as senior Kristina Beer reviewed the rules of her new club, Embracing Controversy.

Beer listed and explained the norms, as she and science teacher Sam Steinberg call them, to her audience of about 15 peers: Be open to ideas, be respectful, actively listen and then respond, accept the tension, speak passionately without screaming at each other, vulgar language is not cool, ask questions, start conversations, invite people to join, be civil.

Beer started Embracing Controversy with the assistance of Steinberg to create a place for students to discuss and share perspectives on controversial topics such as abortion, white privilege, universal health care and euthanasia without the conversation turning hostile.

The idea sprouted at a back-to-school activity fair at the high school. Beer was there as part of Lakers 4 Life, an anti-abortion student group. The group had cookies out to entice people to sign up to join the club.

One student wanted a cookie but said she supported abortion rights. Beer and the student began to debate. Soon others joined in. Steinberg, who was staffing a booth nearby for EcoTeam, intervened when the argument became heated.

“Steinberg stepped in and said maybe there was a better way of doing this and suggested having a meeting to discuss the topic and each other’s viewpoints,” Beer said. “I was like, why don’t we make it a club and talk about other big issues, too?”

The goal of Embracing Controversy is not to debate or attempt to change minds about particular topics but rather to learn about and discuss other people’s perspectives without resorting to personal attacks.

“In an ideal world, we’d be in a circle and one person would be like, OK, here’s what the topic is for today — what do you guys feel when you hear this, what is your take on it?” Beer said. “One person who is super passionate would start out the conversation and bring everyone else into it. We’ll all criss-cross, and everyone will be able to contribute.”

That’s what happened at the first meeting of the club on March 4. Students gathered in Steinberg’s classroom after school ended at 3 p.m. to discuss affirmative action and white privilege.

Conversation moved from the definition of affirmative action to the affirmative action lawsuit involving Harvard University to the difference between equality and equity. The conversation then switched to white privilege, police brutality, diverse representation in education and feeling proud and accepted as a person of color.

Student Theo Hoang talked about being the son of immigrants and the pressure to do good by them, for example. Ezinne Osuji, a junior, said much of black history seems to be ignored in classes and pointed to how differently an encounter with police could go depending on someone’s race.

“I think we shied away from going in and saying a lot of inflammatory things like you tend to see in the media between all the big-name politicians,” senior Ben Maldonado said. “We didn’t necessarily agree on everything, but just because we didn’t agree didn’t mean the conversation became bitter.”

Discussion was cut off at 4 p.m., but students continued to talk in smaller groups in the classroom and as they walked out.

The meeting will set a precedent for the future of Embracing Controversy, Beer said. The club has a loaded schedule with meetings about abortion, school safety, feminism and masculinity, the death penalty, vaccinations, euthanasia, universal health care, poverty and minimum wage and various high school grading systems before the year ends.

“The more controversial it is, the more interesting or worthwhile it should end up being,” Beer said.

The idea is for Embracing Controversy to be a skill-based club centered around improving communication skills and looking “beyond the labels,” Beer said.

“I think talking and finding common ground is the way to do that and better bring together the human race,” she said. “I’m pretty optimistic. I’ve seen it happen enough times to know it’s possible.”

The club will also create a place for students to hear from other students who come from different backgrounds and experiences.

“Prior Lake students are in a bubble just like any student,” Steinberg said. “It’s just a natural phenomenon that occurs. It’s good for this group to be representative of students who want to pierce that bubble.”

Maldonado said learning about other’s perspectives on important topics is why he wanted to join the club.

“These are issues we need to discuss because these are the issues of our time,” he said. “It starts with us. We’re always told be the change you want to see, so might as well do that.”

The club is a start to changing how people interact and argue with each other, Steinberg said.

“Kids become adults. I want our adults to be better,” he said. “I think we are recognizing this way of communicating is a skill that needs practice.”