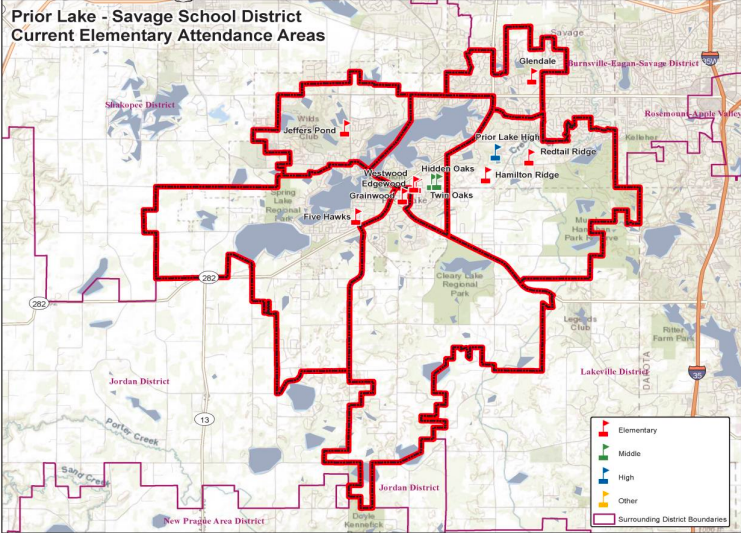 The current boundaries for Prior Lake-Savage Area Schools. 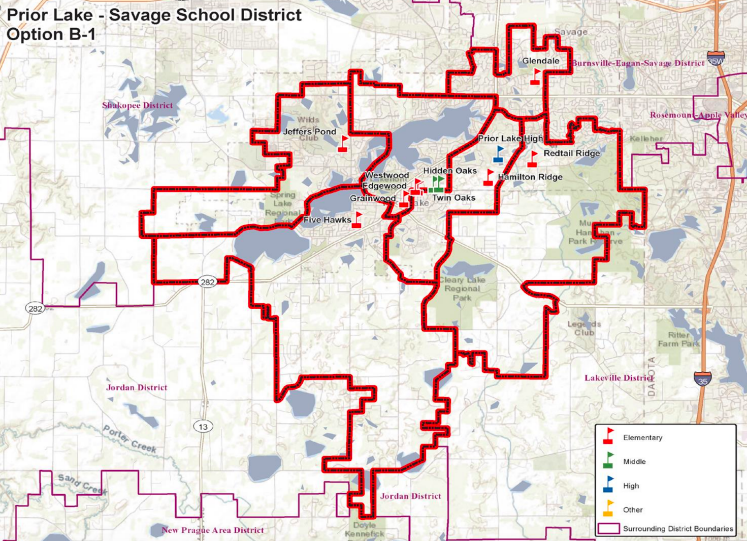 Option B1 of the proposed district boundary changes. 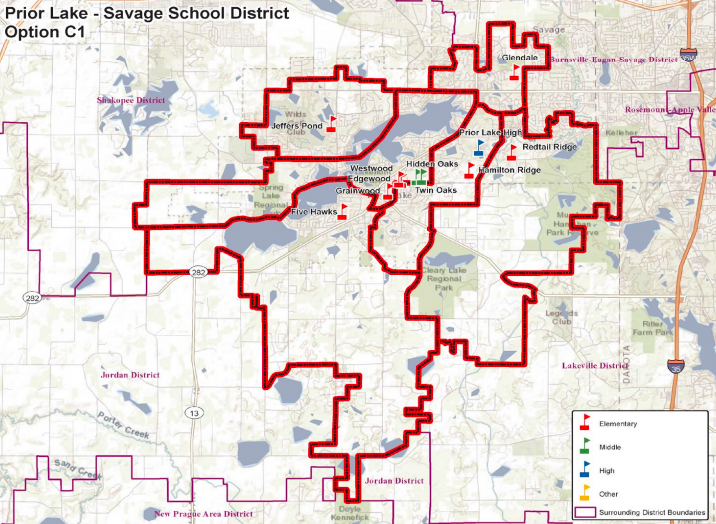 The current boundaries for Prior Lake-Savage Area Schools.

Option B1 of the proposed district boundary changes.

The Prior Lake-Savage Area School Board plans to vote May 6 on where kindergarten through fifth grade students will go to school.

Changing attendance boundaries were hotly discussed during a public forum during the board study session Monday. According to the board, the changes will help keep schools' enrollment within their capacities before the opening of Hamilton Ridge Elementary School in the next year or two.

The boundary changes are meant to take into account short-term and long-term capacity needs, according to district documents.

The current attendance boundaries have left the district elementaries at anywhere from 77 percent to 130 percent capacity, with Redtail Elementary School and La ola del lago on the high end.

The board's two primary boundary options, labeled B1 and C1, would even out those numbers while taking into account the newly-built Hamilton Ridge. Both options would set La ola del lago at 95 percent and Redtail Ridge at 64 percent in 2020, the most significant steps down in capacity.

In both options, neighborhoods from southeast of the Eagle Creek Avenue and Highway 13 intersection northward to around Prior Lake High School would be assigned to Hamilton Ridge.

The biggest differences between the two options concern Jeffers Pond and Westwood elementary schools' boundaries. In Option B1, an area around Spring Lake Regional Park would be redistricted from Five Hawks to Jeffers Pond. In option C1, the same area would instead go to Westwood.

Staloch said both B1 and C1 options are favored by the public.

"The process of determining elementary attendance boundaries is never an easy one," Staloch said. "We understand this is difficult because parents love their school. Once our new boundaries are determined, principals will be planning transition events to ensure everyone feels welcomed and gets acclimated to their new school."

At the packed school board study session Monday, two dozen people spoke during the forum mostly about the separation of Carriage Hills from the Jeffers Pond attendance area under Option B1.

Penny Peterson of the Carriage Hills neighborhood in Prior Lake said she fears her kids’ elementary school may lose its “small-town feel” if her kids are no longer able to walk each day due to the redefined boundaries.

“We get to walk to (Jeffers Pond) when the weather’s nice," she said. "I think that’s a huge thing for us. We are blocks away from the school. We can see the school. That should be taken into consideration.”

It's about more than a longer drive to school, said Becky Schultz, also of Carriage Hills. “It’s the community school feeling that we have, being able to walk or bike to school," she said, adding proximity to Jeffers was one of the main reasons she moved to Carriage Hills.

“I was a walker to school,” she said. “I loved that feeling."

Jeri Nowak of the Northwood Meadows neighborhood, spoke in favor of option B1.

“You’re looking at over 100 total (students’) difference,” she said. “If the primary goal is (capacity), the numbers say B1.

"My son currently goes to Five Hawks, and he will be displaced no matter what," she added. "You guys have a tough decision.”

As part of the change-up, La ola del lago Spanish Immersion School will become a K-5 district school at Grainwood Elementary starting in 2020.

Correction: In an earlier version of this story, Jeri Nowak was misnamed. The superintendent's office has since provided comment.