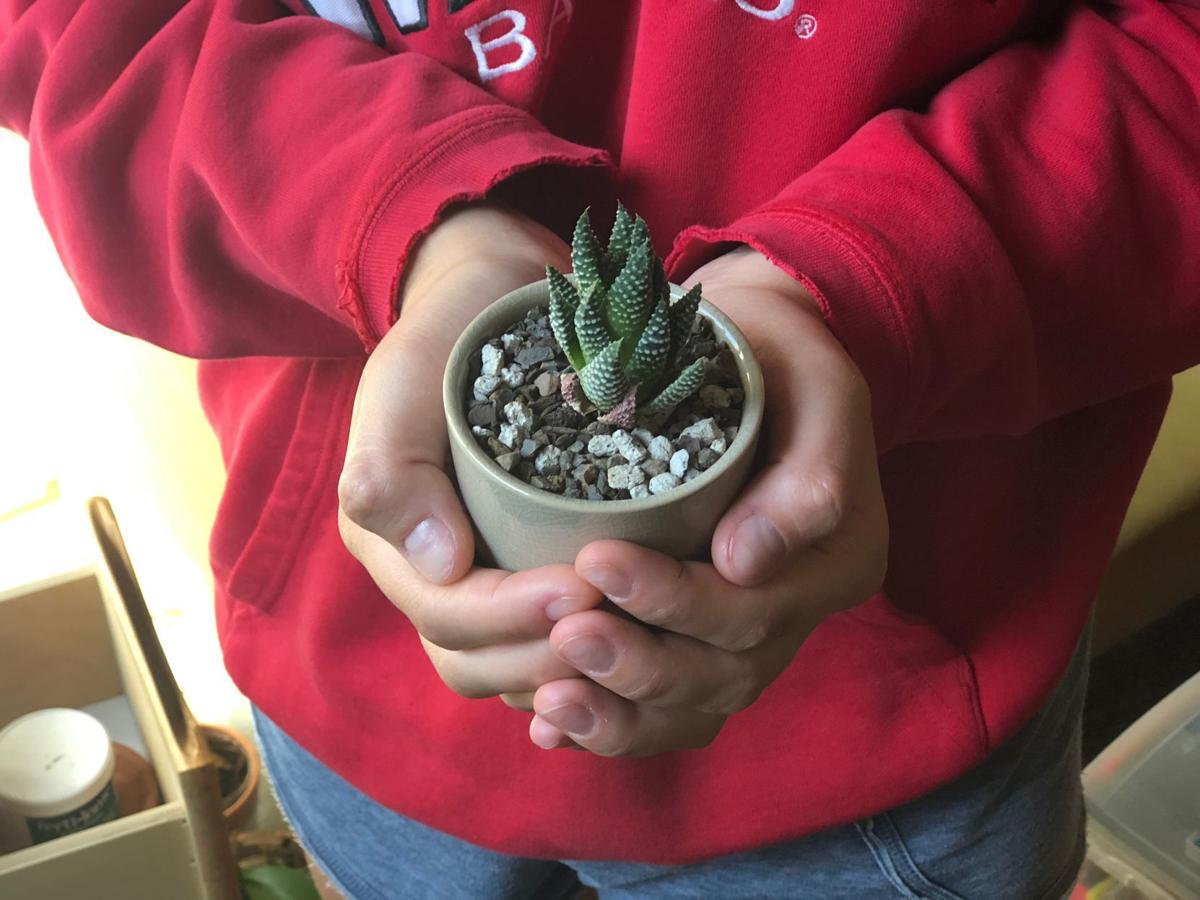 Scott County Treatment Court graduate Laura holds a potted plant in her dorm room at Augsburg University in Minneapolis on Aug. 30. Laura was one of the first two graduates of the court program, which began in October 2016. 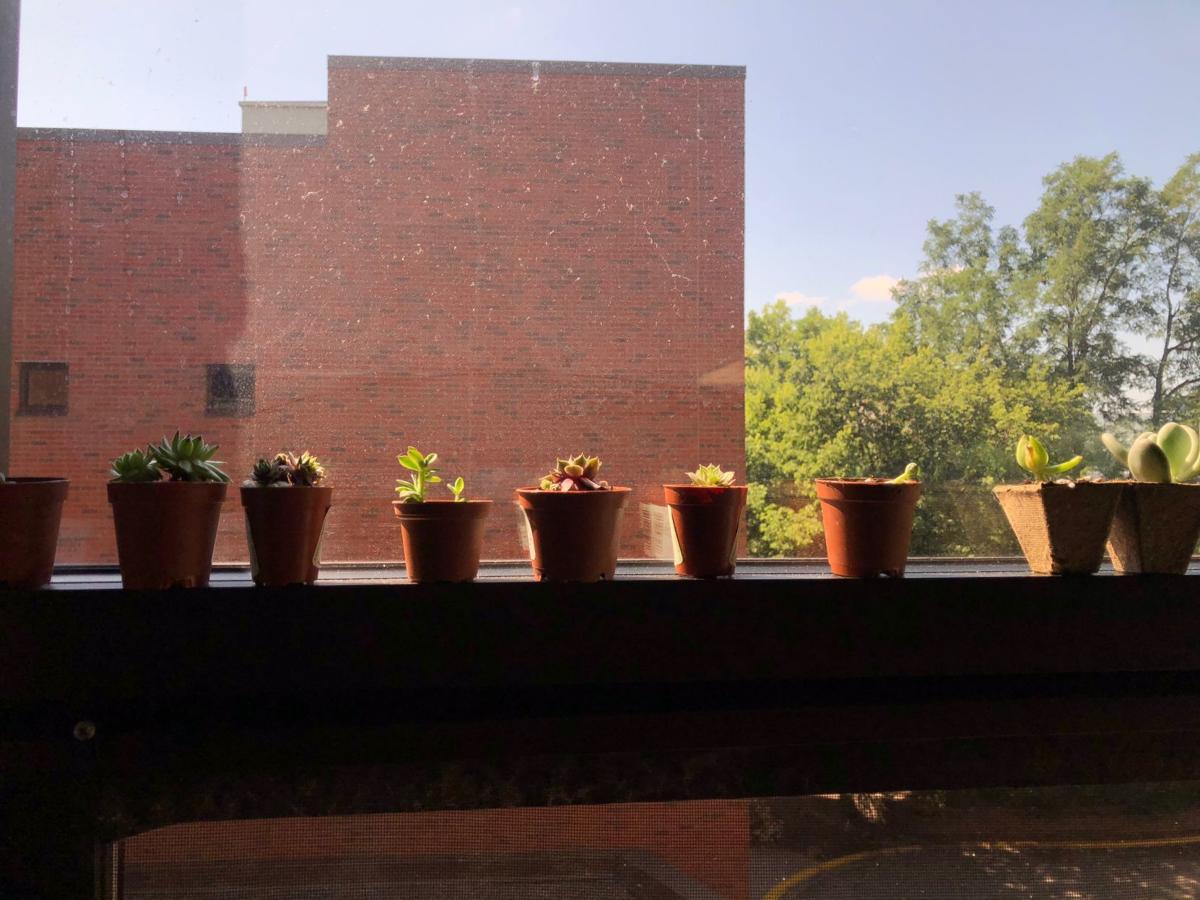 A row of potted plants sits in the dorm room window of Scott County Treatment Court graduate Laura, who once abused marijuana and acid but now is a second-semester freshman at Augsburg University in Minneapolis.

Scott County Treatment Court graduate Laura holds a potted plant in her dorm room at Augsburg University in Minneapolis on Aug. 30. Laura was one of the first two graduates of the court program, which began in October 2016.

A row of potted plants sits in the dorm room window of Scott County Treatment Court graduate Laura, who once abused marijuana and acid but now is a second-semester freshman at Augsburg University in Minneapolis.

This is the final installment of a three-part series looking at the Scott County Treatment Court.

A row of potted plants soaks up the sun in Laura’s dorm room window.

Laura, whose name has been changed at the request of her family to protect her identity, is a college freshman interested in horticulture or botany.

“Something science related at least,” Laura said. “I’m definitely a scientist type of person. I do some writing and I’m an artist, but when it comes to a career, I think I could be successful in a scientific field.”

While most people undergo change in the formative years of high school and on into college, Laura is unrecognizable from who she was three or four years ago — if not in looks or personality, then actions.

Part of this transformation is due to her time in and graduation from the Scott County Treatment Court. Laura, who graduated on July 30, was one of the first two graduates of the court. There have been two more graduations since.

Laura said she struggled with behavioral and social issues when she was young, a result of not being diagnosed on the autism spectrum.

“Children on the spectrum have a lot of issues that are hard for people around them to deal with, because it’s hard to understand,” Laura said. “They don’t know what you need.”

The behavior issues toned down in middle school, but the social issues continued. Academically, Laura excelled.

During her sophomore year, Laura smoked marijuana for the first time.

“Everyone has their ‘aha’ moment, every addict, where that’s their drug of choice,” Laura said. “It’s said when you use it for the first time, you think ‘I have arrived, this is the solution.’”

For Laura, the solution was that smoking marijuana was a relief, a break from her anxiety and “type A” tendencies.

Using drugs or alcohol as a coping mechanism to treat mental illness is common, said Tim Groth, a program director for Haven, an outpatient chemical dependency treatment center with a location in Shakopee.

The coping mechanism works at first, and is validated by positive experiences. Though the drug stops working as a coping mechanism at some point, the person continues to use, hoping it will work again, Groth said.

At the same time she began smoking marijuana, Laura’s grades began to crash.

“I’m very analytical and I have thought about this — I don’t know if the crash caused the drug use or the drug use caused the crash,” Laura said. “It just kind of happened at the same time.”

Laura began to smoke as often as she could — before school, during lunch, after school, at night — even skipping class at Prior Lake High School to go smoke. She changed friend groups to hang out with people who smoked as often as she did.

Toward the end of her sophomore year, Laura was diagnosed as being on the autism spectrum. She tried more personalized classes at Prior Lake High School, before moving to a one-on-one teaching school.

Laura’s father, Will, said the autism spectrum diagnosis was a pivotal moment in their lives. Her father’s name has also been changed to protect the family’s identity, at their request.

“It was an explanation that we had not had for her whole life,” Will said. “That doesn’t mean it ends with the explanation, but it gives you a path to follow. It’s about treatment, it’s not about discipline now. That was so important for us.”

At some point, Laura began to steal in order to purchase more marijuana.

Her parents knew something wasn’t right, though not the extent of what was happening, Laura said. Will said the couple tried to address the issue through typical parenting methods like punishment and stating expectations, as they had with their other children.

“All this time spent using drugs rendered me incapable of dealing with my emotions and dealing with real life and suddenly I went in this place with nothing,” Laura said. “It was very raw and I felt very vulnerable.”

Laura said she was resistant to the mental health therapy, not believing that the counselors could understand her problems. At one point during treatment, Laura obtained cold medicine in order to get high.

“The staff were like, ‘Wow, you’ve had the best week you’ve had the whole time,’” Laura said. “I was like, ‘Yeah, that’s because I’m on drugs.’ That reinforced my ‘I need drugs’ thing.”

“If you’re sober and you go back out, you pick up where you left off,” Laura said. “I started getting more desperate.”

Laura began to steal again. This time, she was caught stealing more than $500 of makeup from a department store and was charged with a gross misdemeanor.

“That’s the thing about being addicted is it doesn’t matter how you use it, it’s what it does to you,” Laura said. “Everyone, even people in my program will be like ‘it’s just weed’ but look at what it did to my life. You can’t deny it caused major problems for me.”

One night, as she waited in her parked car for a friend to get off work, Laura smoked marijuana wax, which is a concentrated dose of THC, the hallucinogenic chemical found in marijuana. She fell asleep and awoke to police knocking on her car window.

She was arrested and charged with a felony for possession of the wax. Laura was given a stay of adjudication, meaning she would not be convicted of a crime if she adhered to certain conditions — in this case, not smoking marijuana.

For six weeks, she didn’t.

“I changed nothing but the fact I didn’t put a joint to my lips and smoke it,” Laura said. “That was horrible, that was so hard.”

Laura said she began to use LSD. After a while, she began to smoke marijuana again. She was smoking in a parking lot one night when she realized she needed gas. She drove to the station next to the parking lot, but didn’t turn her headlights on.

A police officer pulled Laura over and found marijuana, a bowl pipe, a scale and acid in her car. The amount of acid she had was a felony, and Laura, then 18 years old, was arrested and brought to jail.

Instead of jail time, Laura entered treatment at the Hazelden Addiction Treatment Center. During her year at Hazelden, she learned about the science behind addiction and recovery, topics that were previously unknown to her.

“There was a solution, that was what I learned,” Laura said. “That was the best news I’d heard in a long time. I took that solution and ran with it because I was desperate and that’s how people enter recovery is with desperation. That’s what gets you sober.”

“There’s these things that you talk about in recovery called spiritual experiences, where shit happens with no explanation but a higher power,” Laura said. “It doesn’t have to be a certain religion or anything, but it couldn’t have been on accident. For me, that was ... getting arrested and then ending up in treatment and then right when I got out of treatment, having this court happen to start. It was like everything just came together.”

Participants must choose to enter the court, which is an intensive process that lasts about two years.

“I wanted to be sober,” Laura said. “That was what you needed to do to be in treatment court. I was so ready for it. I was like, ‘Yes, take me there, I will do whatever it takes, like help me get my life together.’”

Participants complete five phases, each of which has goals for completion like being sober for a certain amount of time, completing drug testing, finding a job, going through counseling and more.

Once the five phases are complete, the participant graduates from the treatment court. For people who “graduate” from treatment courts in the United States, 75 percent will not be arrested for at least two years after completing the program, according to the National Association of Drug Court Professionals.

On July 30, Laura graduated from treatment court. She has two years of sobriety under her belt as of Aug. 4.

“I can honestly say I stayed sober the whole time and part of that was because I’m stubborn as hell,” Laura said. “I make it happen, no matter what, and that’s what I did.”

Laura enrolled at Augsburg University in Minneapolis and completed her first semester while in treatment court. She also joined the StepUP Program, a recovery community at the college.

“The thing I like about the recovery community is everyone is working on themselves,” Laura, now 20, said. “It’s that everyone is supporting your personal growth and trying to grow as individuals themselves. That’s the kind of environment I want to be in.”

“We’re lucky,” Will said. “We’re really lucky. If it happened a year before, it could have gone in a whole different direction. It changes lives, it changed her life. The challenges aren’t over, but they opened another door for her.”

Laura said she hopes her recovery can be an inspiration to those struggling with addiction.

“I hope that’s the realization that people after me come to — no, I don’t have any less problems than you. I just learned,” Laura said. “What that means is that you can learn, too. It took a long time, it took two years, but here I am. It happened, just be patient.”

On a Monday afternoon in the Scott County District Courthouse, First Judicial District Judge Christian Wilton stood at a podium in courtroom No. 3.