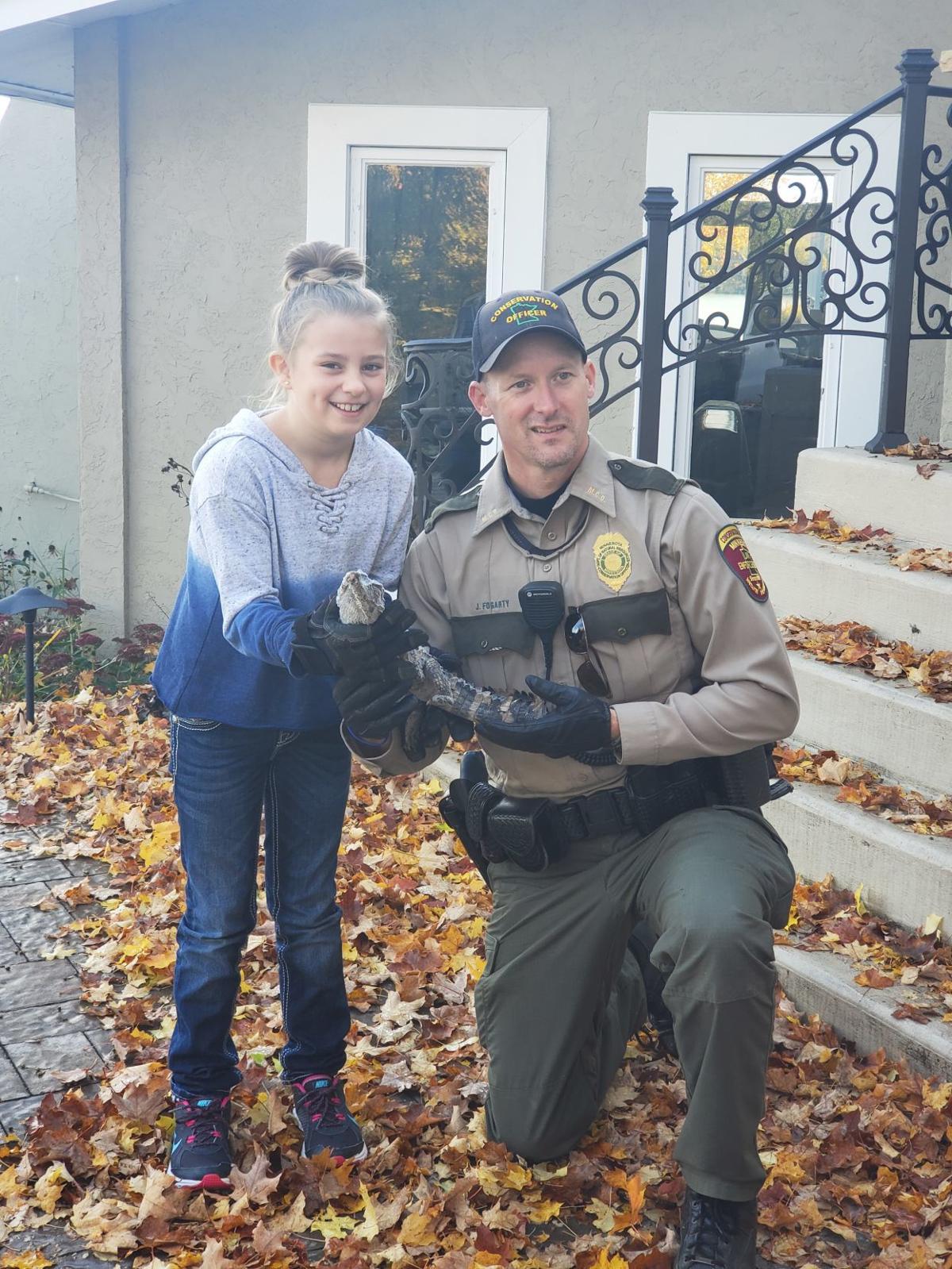 Quinlynn Lehrnann and Minnesota Department of Natural Resources conservationist James Fogarty pose for a photo with the dwarf caiman Quinlynn discovered at her grandparents’ home on Lower Prior Lake. Fogarty told the family he’s never been called to pick up an alligator before. 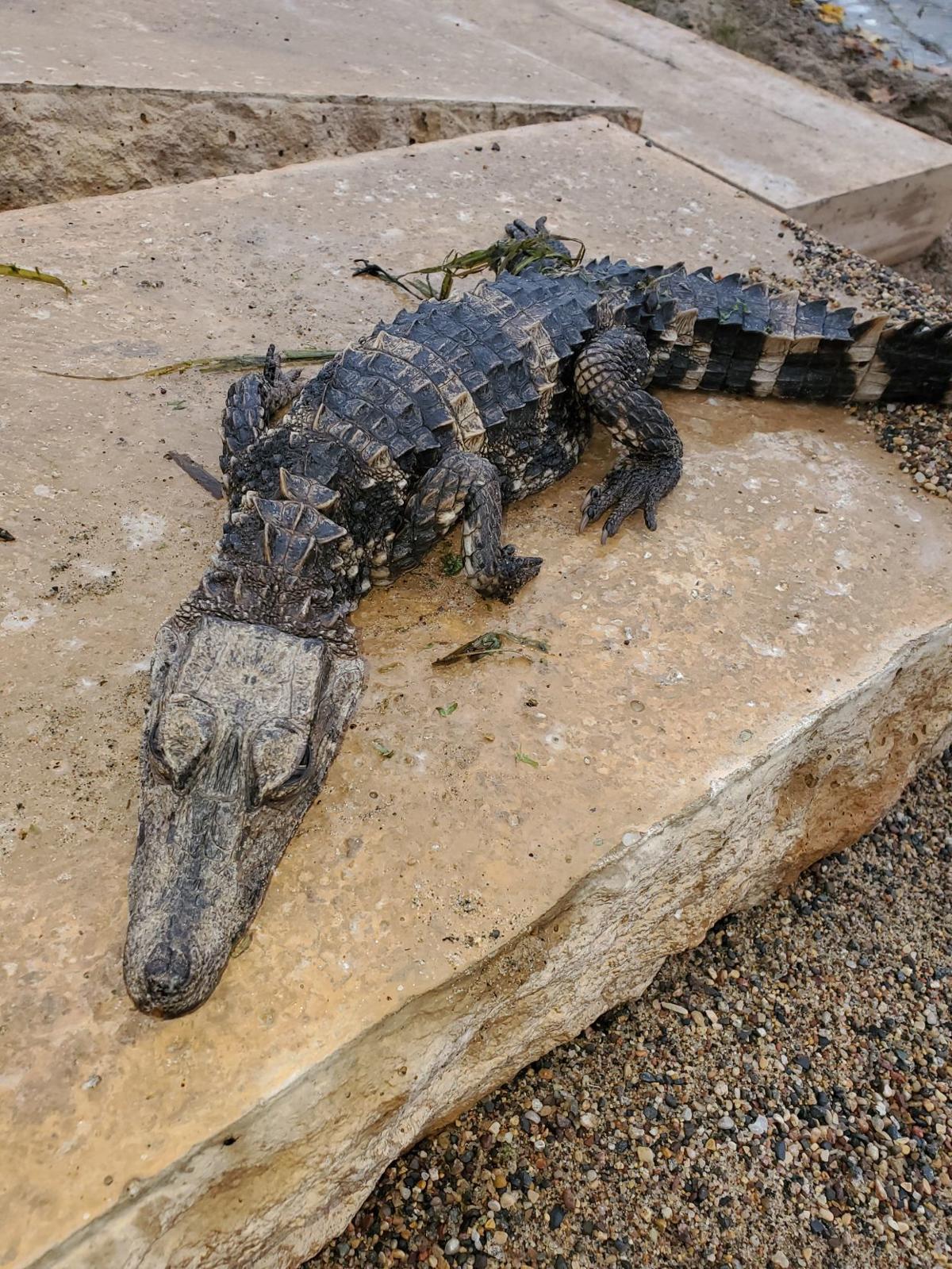 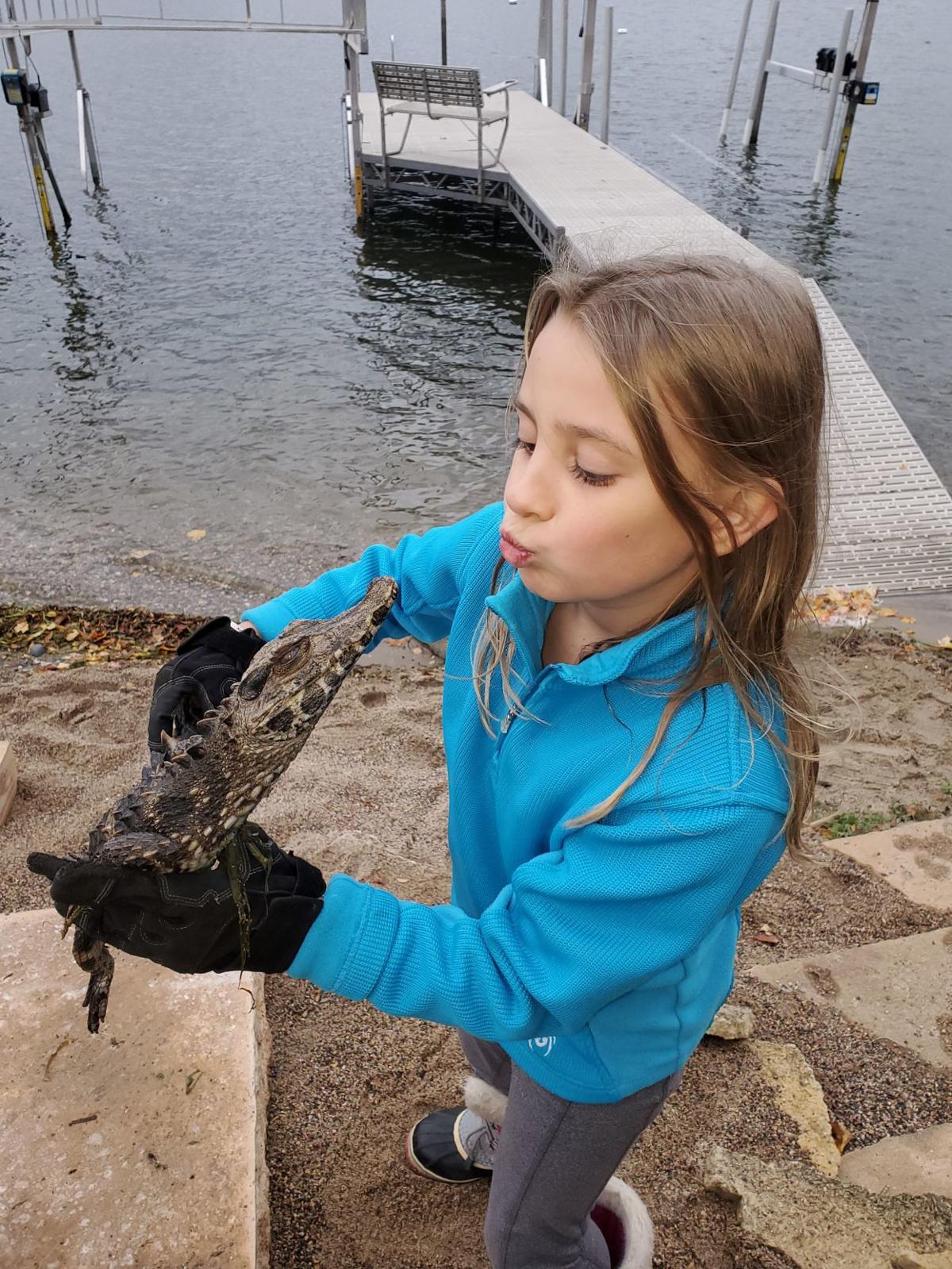 Quinlynn Lehrnann and Minnesota Department of Natural Resources conservationist James Fogarty pose for a photo with the dwarf caiman Quinlynn discovered at her grandparents’ home on Lower Prior Lake. Fogarty told the family he’s never been called to pick up an alligator before.

“Grandma, you’ve got to call the DNR!”

Those words from 9-year-old Quinlynn Lehrnann were Connie Peer’s second clue that Saturday, Oct. 12, was not going to be a typical day of yard work around her home on Lower Prior Lake.

The first was the picture her husband, Kent, sent her of a dead 2.5-foot caiman, a reptile similar to a small crocodile, on a rocky beach.

“I thought, well, we just bought a place in Florida,” Peer said. But Quinlynn told her the caiman wasn’t in Florida but in Prior Lake and on their beach.

The caiman washed up near the edge of Peer’s dock, still slightly submerged. After tapping it with a paddle to see if it was real, she told her grandfather about what she’d found.

The family called the Department of Natural Resources Department conservationist James Fogarty who was on his way out of town and told Peer to put the caiman on ice for a few days.

Peer’s learned that caimans, as cold-blooded reptiles, can become dormant and still in low temperatures. She said she’s happy she didn’t know that when she got Quinlynn to pose with the caiman she took to calling Mr. Chopps.

Mr. Chopps has filled Peer and Quinlynn’s lives with a bevy of excitement: first the viral Facebook post by a family friend, then calls from news stations and the American.

Peer said her granddaughter has soaked up every minute of it talking with the department, giving interviews and starting to consider a career in wildlife management.

“She’s learning a lot from this, which I so love,” Peer said.

Department spokesman Harland Hiemstra said Tuesday that the agency is still investigating the reptile’s source, but one of Peer’s neighbors came forward earlier in the week claiming it was his 2-year-old caiman, Big Head.

Hudson was unavailable for an interview by press time on Thursday but told Fox 9 News that he purchased it at a Bloomington animal show.

Hudson told the news channel that the caiman had been in an outdoor enclosure when a July storm blew some debris into his yard, allowing the reptile to escape. He decided to keep the disappearance quiet.

“What do you say to your neighbors? ‘Hey, I’m missing a pet alligator or caiman or whatever’? Yeah, right,” Hudson said.

Laura Windels, the president of the Minnesota Herpetological Society, said the best course of action would be to contact animal control, though the society typically warns against owning these kinds of reptiles in the first place.

“Dwarf caimans have a reputation for being particularly cantankerous crocodilians,” Windels wrote in an email. “Perhaps even more so than alligators, dwarf caimans do not make great pets for even the most advanced keepers and MHS does not recommend them.”

Windels’s warning is warranted, Hiemstra said. In his 23-year career with the department, he’s only heard of one other incident involving an alligator — and things didn’t go well for the alligator.

In 2013, department officers shot an alligator on Goose Lake in Scandia after it started stealing bait from local fisherman. Hiemstra said the agency got calls from Minnesotans frustrated that the reptile had been shot.

“I said to (the caller), ‘Well, ma’am, how do you capture an alligator?’ And there was this long pause, and she said, ‘I don’t know,’” Hiemstra said. “And we don’t, either, because it’s not a situation we deal with regularly.”

Not all alligator escapes end on a mournful note.

In 2015, a pet alligator name Roger escaped for 30 hours in Woodbury before being returned to his owner by local police. In 2016, members of the Crow Wing County Sheriff’s and Case County Sheriff’s Office caught two alligators in 10 days, turning both over a local wildlife park.

Peer said her granddaughter asked Fogarty if she could get Mr. Chopps back following the investigation so she could get it taxidermied.

“Oh, it’s staying at her house,” Peer said with a laugh. “I’m sure my daughter doesn’t want it to come back.”