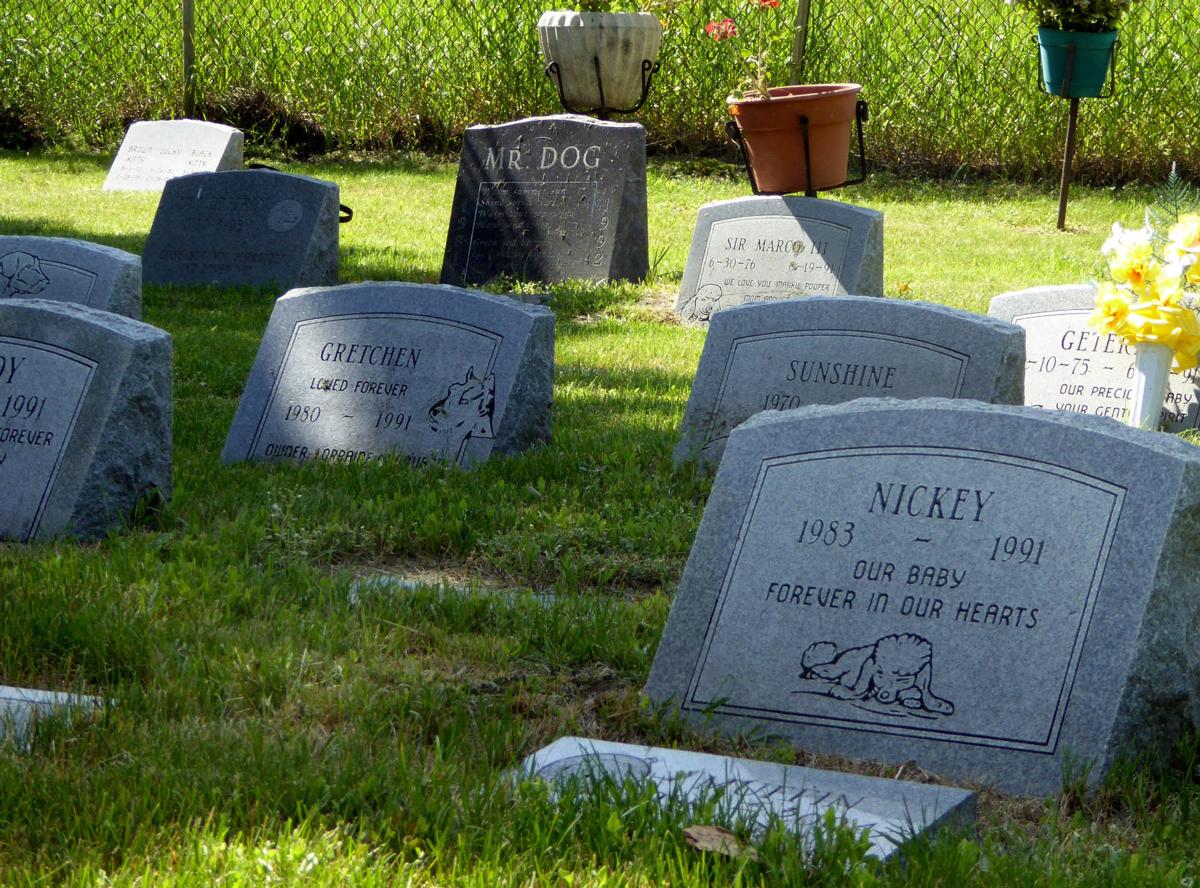 Tombstones at Memorial Pet Cemetery in Roseville sat in sunshine and shady patches on the morning of June 21. 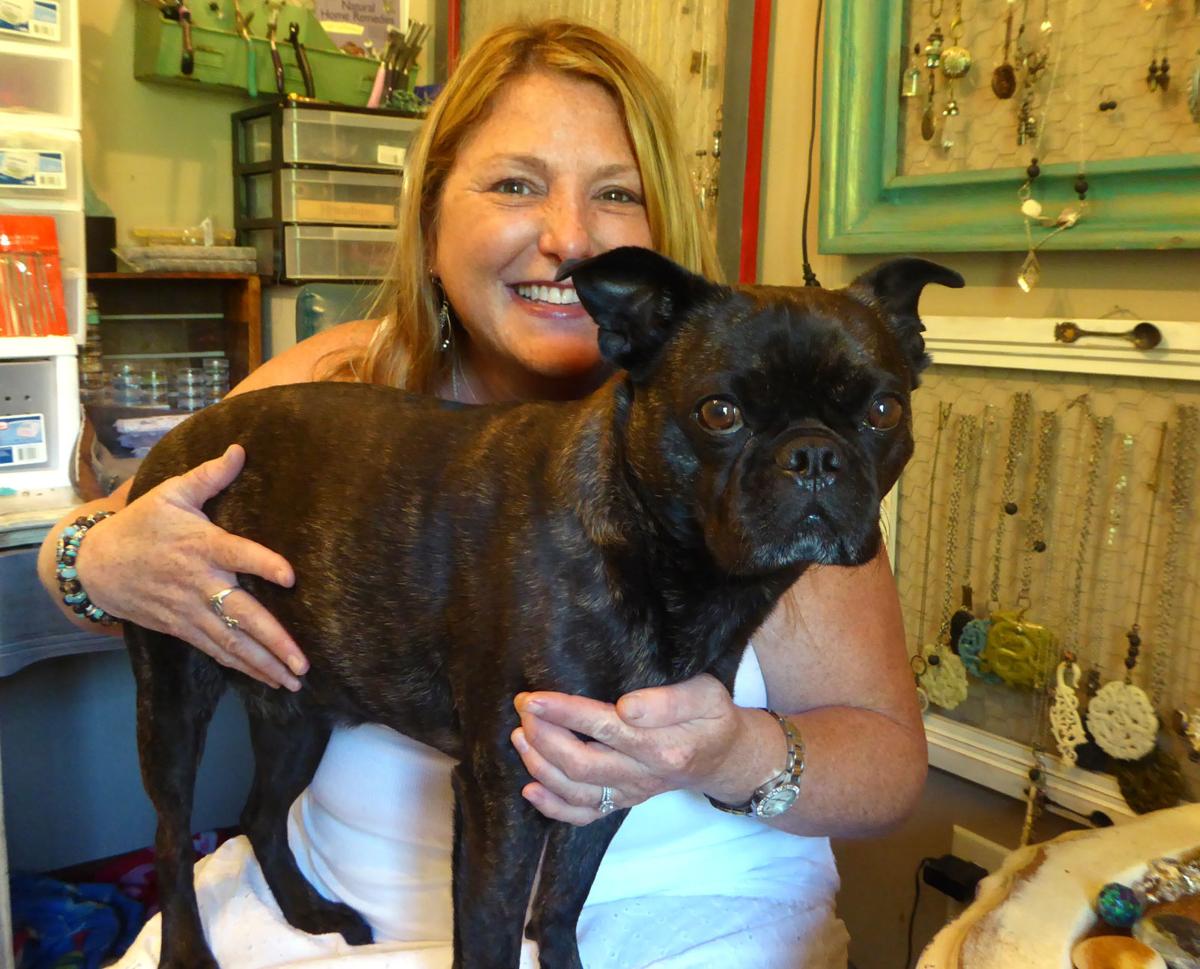 Marla Lindner and her dog sit in her studio in Eagan on June 15. 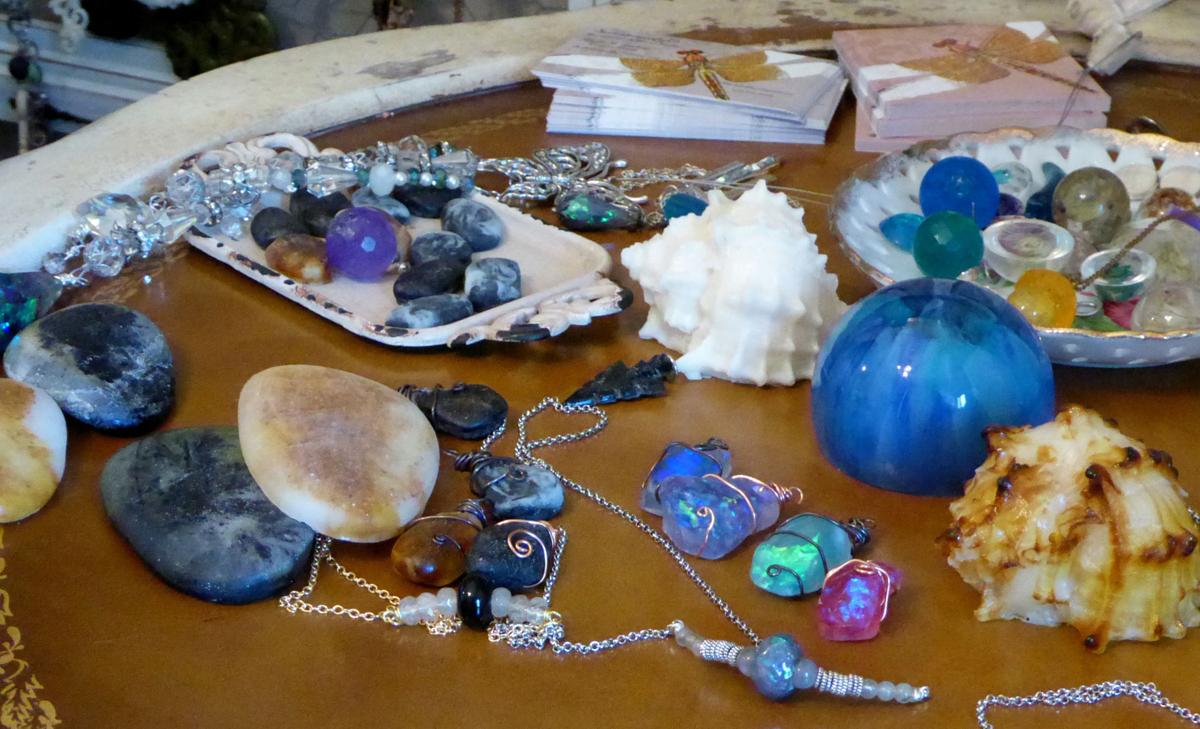 Marla Lindner set out her memorial jewelry on June 15. 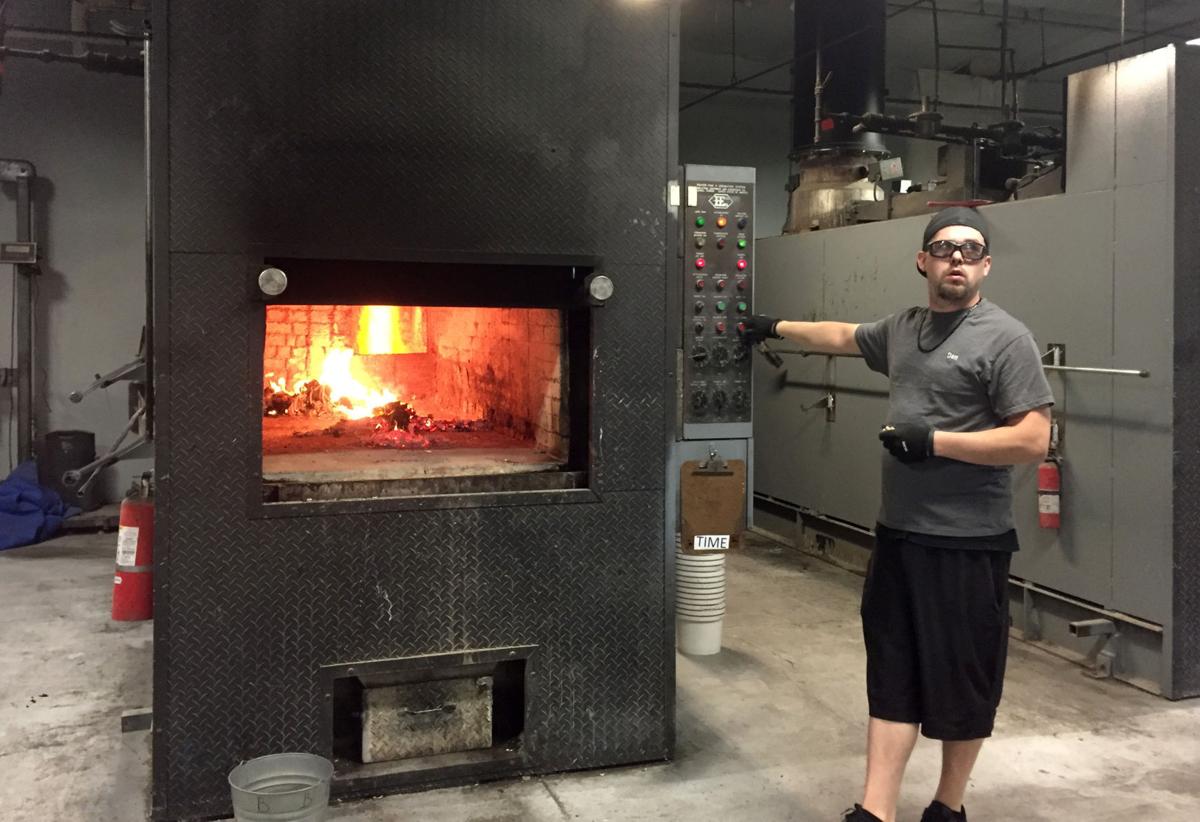 The Veterinary Hospitals Association has six cremation machines, which can process hundreds of animals each day. On June 19, they were expecting about 200 animals to arrive that afternoon.

T here is a small cemetery in Roseville where the tombstones bear names like “Sunshine” and “Champ” and “Cuddles.” A stately stone with white lettering says, simply, “Mr. Dog.”

The Memorial Pet Cemetery is the final resting place for dozens of animal friends. It’s the oldest pet cemetery in Minnesota, and has existed since the 1920s. The cemetery filled up and closed itself to new entrants in the ‘80s, but the Animal Humane Society keeps it tidy.

To many, pets are a member of the family, and when they die, certain rites and rituals are expected.

What specifically those rites and rituals are will vary from person to person.

John Magnuson, who works at Mid-America Taxidermy in Savage, says the business generally stays away from working on late pets. But that’s not to say it hasn’t been asked.

“We’ve done a pet piranha in the past, and we had a lady whose horse had died, and we bleached the skull for her,” he said. “There are people who want us to do that, but we want to stuff deer heads, we don’t want to stuff chihuahua heads.”

There is a far more conventional trend when it comes to pet burial. Mandi Wyman has been the executive director of the Scott-Carver County Humane Society for almost two years now. The Humane Society isn’t a shelter — it’s a foster-based rescue — but it does have partnerships with local veterinary clinics for euthanasia and disposal services.

“When we do euthanasia, we always do cremains,” she said. Three or four animals’ cremains are on display in the Humane Society office, a little reminder of the ultimate responsibility of a pet owner.

The unfortunate fact about signing on to own a pet — to love it and to care for it for the rest of its life — is that eventually, they die. There are ways to make the process a little easier and more palatable, she said. A lot of vets cover animals with blankets and administer the medication underneath, out of sight.

“They make it as comfortable and beautiful as possible,” Wyman said. “They’re just very respectful for how to go through the process.”

But once that process is done, what happens next is pretty standard. Eventually, a van will come to the clinic, pick up the animal and take it off to a crematorium: in this case — and in the vast majority of cases — that crematorium belongs to the Veterinary Hospitals Association.

The Veterinary Hospital Association is located in a nondescript business park in St. Paul. Unless you know where you’re going, you likely won’t know which boxy building is the crematorium.

According to Jeff Benson, the executive director of the Veterinary Hospitals Association, that’s very much by design. He showed the monitor they keep in the crematorium, which tips them off if there’s any sign of smoke, so they can adjust the machines accordingly.

It was June 19 — a Monday morning. Mondays tend to be busy for the crematorium. About 200 animals were expected to come through the doors that afternoon.

“Cremations are only a small aspect of what we do,” Benson said. Six years ago, he actually worked in human pharmacies. Working with veterinary clinics, he said, isn’t that different, but not every office has a big sleepy dog in almost every cubicle. There were two in Benson’s office alone.

The Crematorium is located in an adjoining building. There’s a low table right by the door with rows and rows of small, cardboard boxes on top of it. The largest ones are the size of, maybe, a 300-piece puzzle box. The smallest ones look barely big enough to hold a fancy Christmas ornament. Each of those boxes contained someone’s pet; there were cats and small dogs in the little ones, and your big dogs in the larger ones.

“That’s what gets people sometimes,” he said. “They think they’re not getting all the ashes back.”

Cremains are merely the bone matter of the animal, ground up until they’re the consistency of coarse flour. When clients cremate their big yellow Labrador retriever and get not even a shoebox worth of cremains, it can sometimes be jarring for them. They somehow expect more to be left over. They expect more to hold onto.

On the opposite wall of the front room is a heavy metal door and a wide rectangular window. Beyond, six cremation machines hum loudly. If clients want their animal’s ashes back, it’ll be cremated with some degree of separation between it and other animals, but otherwise, many animals are cremated together. It takes about an hour to an hour-and-a-half, baking at 1,800 degrees, to reduce an animal to bleached, seashell-like bone fragments.

A crematorium worker briefly opened up the metal door of one of the machines, revealing a metal platform inside. Three piles of bones and gristle, wreathed in flame, smoldered along. There was an acrid, meaty smell in the air, until the door was shut again. Benson replied in the past tense when he was asked what kinds of animals the three carcasses had been.

Benson wants to be as transparent as possible when it comes to cremation. There isn’t much regulation over the industry, and it’s all too easy to find crematoriums that will do a slipshod job of it. He wants people to know more about what happens to their animals after they die, to take out some of the mystery and the distrust.

And what happens is not graceful, or spiritual, or pretty.

“It’s not the most glamorous process in the world,” he said. “It’s a necessary business, and we try to do a good job of it.”

When clients want their cremains back, they can have them either in one of those cardboard boxes, or an urn. When they don’t want them back, they go to a local landfill. Benson didn’t want to sugarcoat that, either. There’s no flowery field or scattering of the ashes.

The Veterinary Hospitals Association doesn’t just do dogs and cats. They also serve several zoos and aquariums, and will take on the occasional tropical fish, goat or tiger. No matter how they come in, they come out looking much the same. What happens to them after that is mostly the prerogative of the humans who loved them. They can be released, or returned — to be scattered, or enshrined.

Or, in some cases, worn.

Wrapped around your finger

Marla Lindner’s town house in Eagan looks unassuming from the outside, but one doesn’t have to walk too far past the threshold to notice a few exceptional things: her stout, big-eyed dog, her two roly-poly cats and her jewelry studio, StudioDragonfly 19, where she displays her wares.

Lindner creates all sorts of pieces, some imbued with essential oils, some containing flowers from weddings. But some of her most popular pieces are memorial jewelry, which contain the ashes of the dead.

“This is the house of ash,” she said.

She makes rings, pendants, paperweights, the works. The variety is staggering. Some pieces just look like smooth stones. Others look like glittering crystals. Some are molded into dolphins, hummingbirds or shells. They’re all made of acrylic, and they all contain cremains.

Lindner has been doing this ever since her old dog, a Boston terrier-pug mix, passed away.

“His name was Bart,” she said. “I was devastated… Once they take your pet away to be cremated, you just want him back.”

She used her jewelry-making skills to preserve some of Bart’s ashes in a pendant with baby chicks on it. That was her first memorial piece.

Eventually, she did some research and realized there was a market out there for people like her, who wanted a wearable memorial of the animals they loved. Most places that do this make their jewelry and artwork out of glass, which makes it fairly expensive. To cut down the price, Lindner uses acrylic.

“I didn’t think that people should have to pay so much money to mourn,” she said.

After she put out her first few pieces, she started getting commissions. People would send her their pet’s ashes, and she would create a custom piece of jewelry for them. She gets anywhere between four and 20 commissions in a week.

Lindner knows she’s making art with a precious material. She always says a few words of comfort before she begins a piece, wishing the departed pet well. If she makes a mistake on her first try, she sends the compromised piece — as well as the improved one that follows — back to her client. She never keeps other people’s ashes, or throws them away.

The reason she does this is, in part, because she wants to be a comfort to people who have lost someone special to them. In addition to pets, she also makes jewelry from human remains, and each story has an impact on her.

“These things, they stick with you,” she said. “It makes you feel so lucky, because it’s really about love in the end.”

Of course, there’s controversy, too.

“Some people think I’m defacing them,” she said of the remains. She has friends who believe what she’s doing is wrong. That’s fine, she said. To each their own. She does this because it once gave her comfort.

“It makes you feel close to the person you lost,” she said. “I have Bart everywhere in my house. It will happen to each one of these animals, too.”

She gestured to the goofy, sullen dog, the languid and affectionate cats.

It’s impossible to say what an animal would want to happen to it after it dies, or whether it would even care. They, unlike humans, leave no living will, give no last instructions, impart no final words of love or wisdom. But while they’re alive, they offer whatever comfort they can. So, people, in their own way, honor them — whether it’s by holding on, or letting go.

“I didn’t think that people should have to pay so much money to mourn."