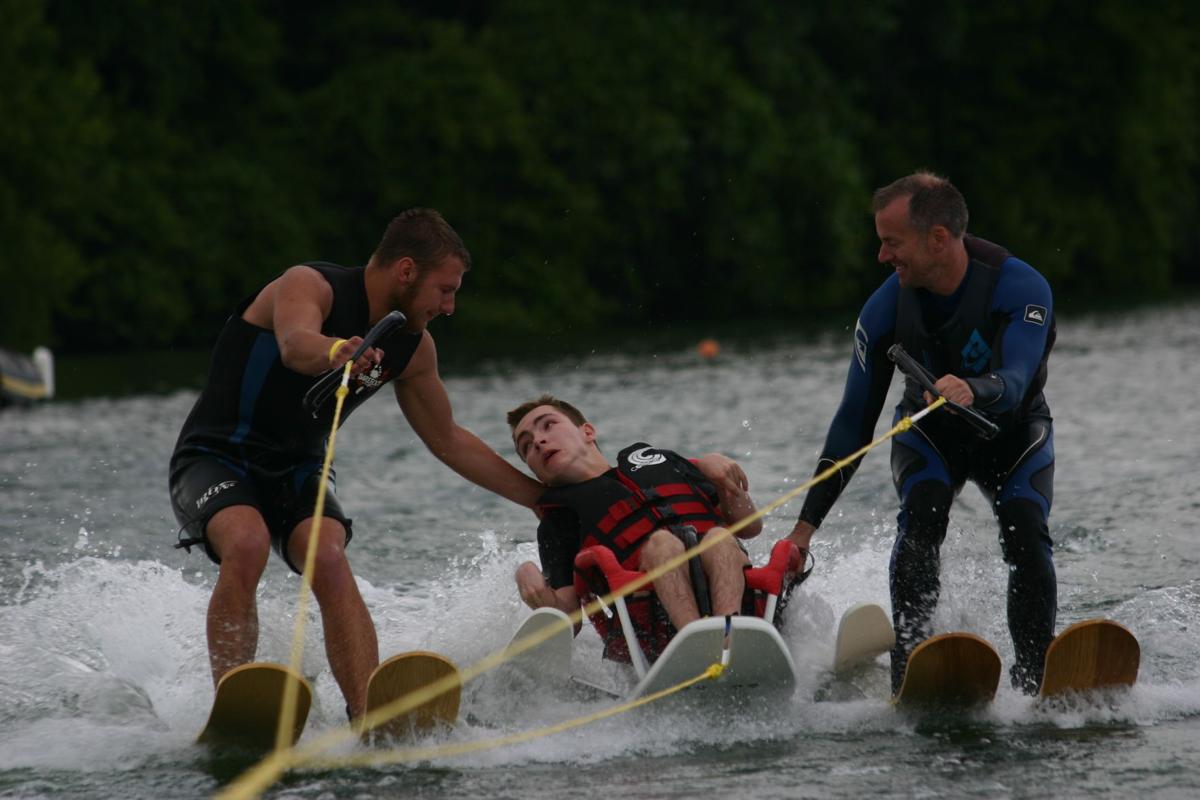 Sam Campion waterskis on Quarry Lake on Tuesday, with two volunteers from the Shockwaves performance waterski team alongside him. 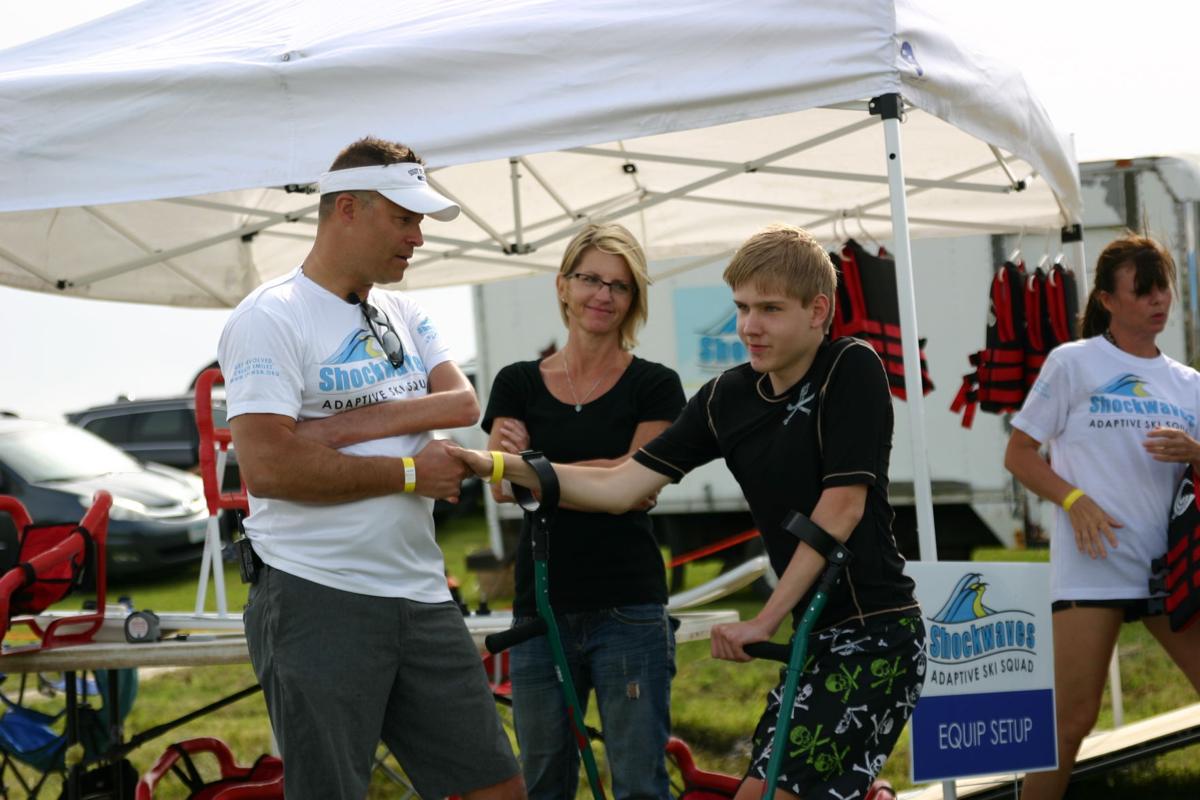 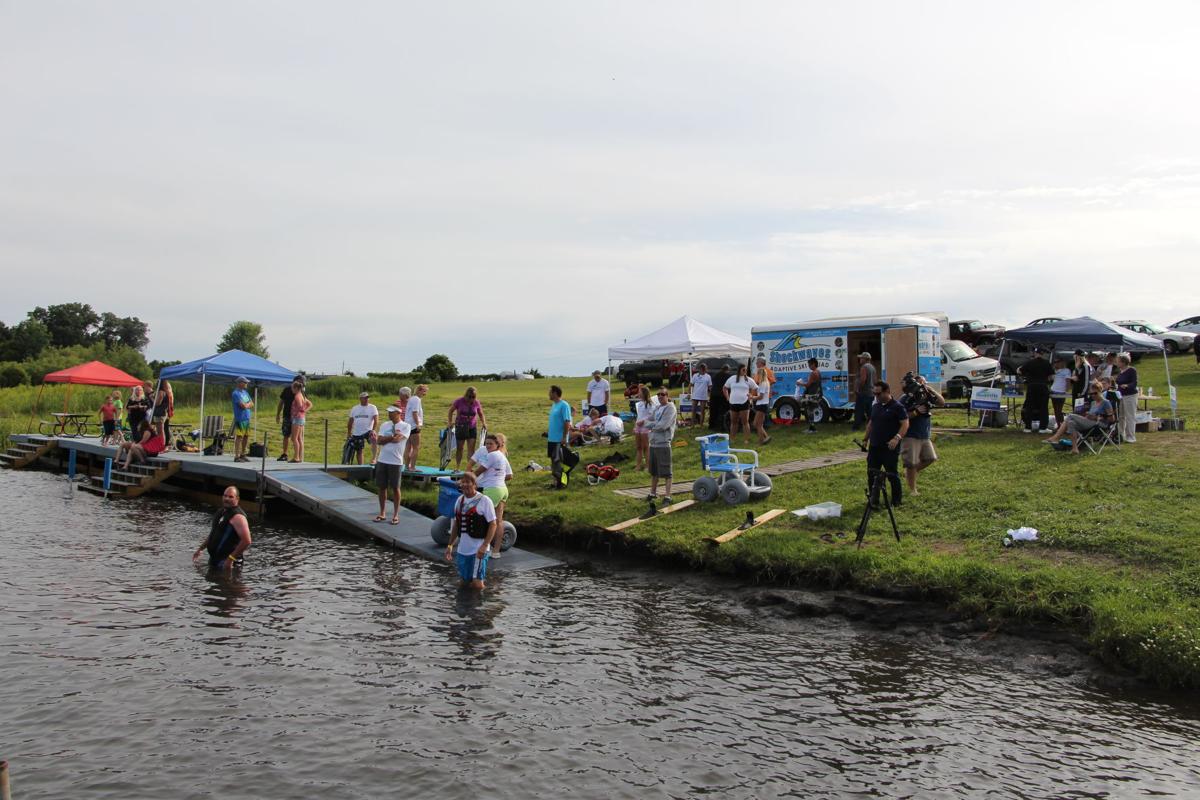 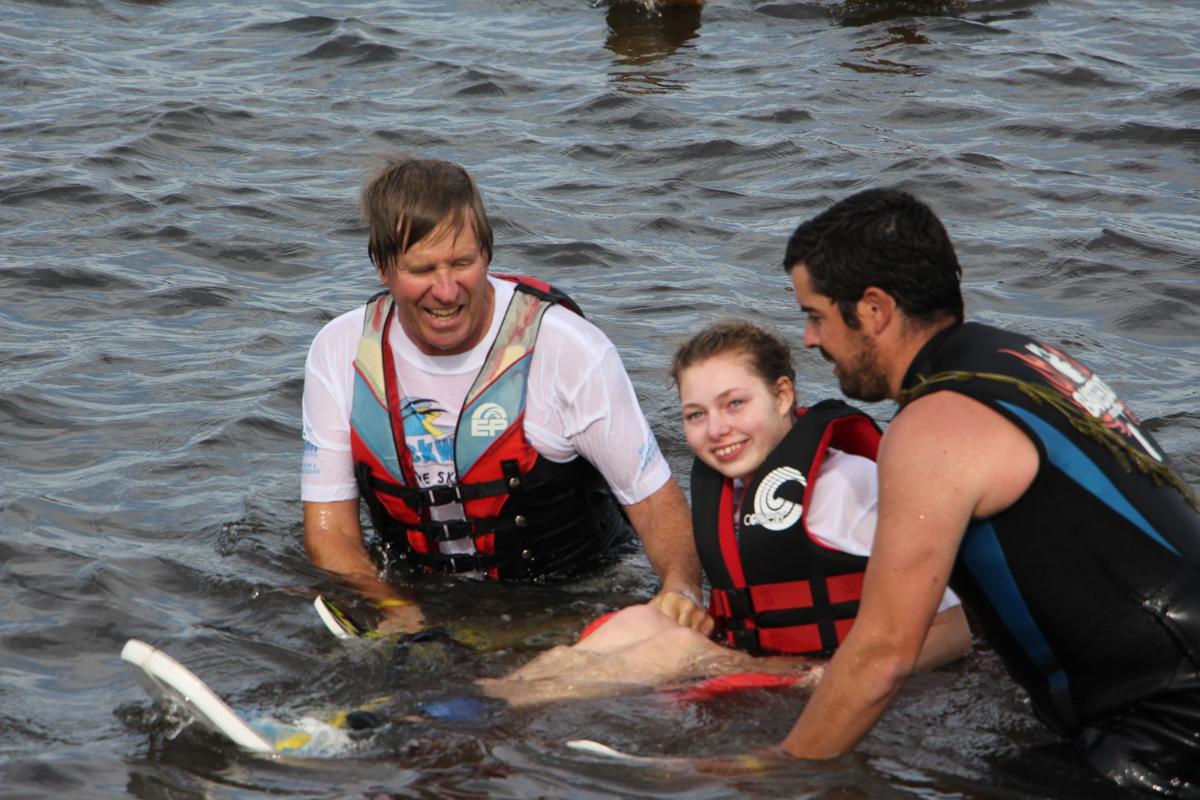 Ashlyn Markovich water skis for the first time in her life on Quarry Lake in Shakopee at the Shockwaves adaptive ski clinic June 27. 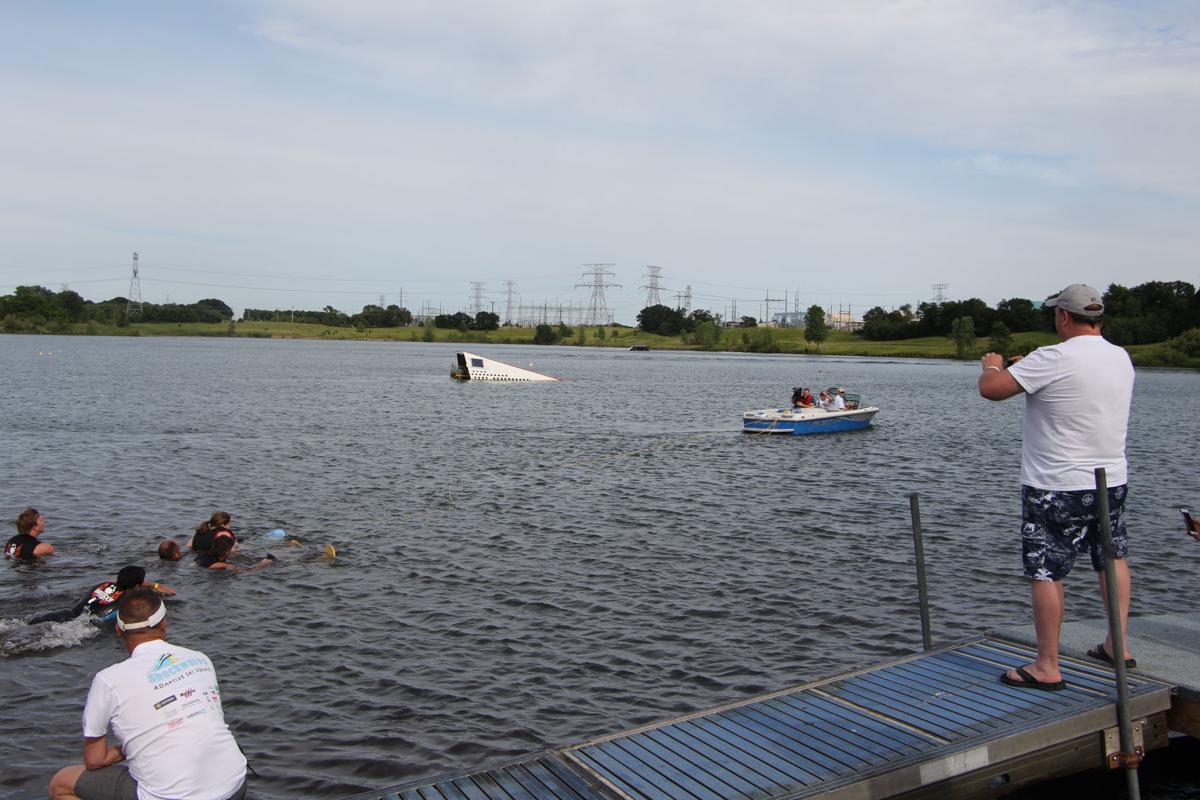 Meghan Lannon sets off on her first ever water ski adventure while her dad Mitch takes a photo from the dock. Lannon participated in the inaugural Shockwaves Adaptive Ski Clinic at Quarry Lake in Shakopee June 27.

Sam Campion waterskis on Quarry Lake on Tuesday, with two volunteers from the Shockwaves performance waterski team alongside him.

Ashlyn Markovich water skis for the first time in her life on Quarry Lake in Shakopee at the Shockwaves adaptive ski clinic June 27.

Meghan Lannon sets off on her first ever water ski adventure while her dad Mitch takes a photo from the dock. Lannon participated in the inaugural Shockwaves Adaptive Ski Clinic at Quarry Lake in Shakopee June 27.

Meghan Lannon arrived at Quarry Lake with a mission and a cheering squad.

In her blue swimsuit and with the support of her parents, sister and grandmother, Meghan prepared to do something she hadn’t dreamed possible — water ski.

Meghan and her sister, Maria, are both on the spectrum for intellectual disabilities, making water sports and athletics more challenging for them. But last month, volunteers from the Shockwaves performance ski team, Northern Tool and the community put on an adaptive ski clinic, made possible by $25,000 in fundraising for adaptive ski equipment and a trailer donated by Northern Tool.

Volunteers helped 14 people with intellectual and physical disabilities go out on the water, including Meghan.

“All day she kept asking how much longer,” said Meghan’s mom Shelly, as her family set up camp on the dock early, prepping the best seats on the lake for Meghan’s water ski debut.

Meghan’s father Mitch was all smiles as his daughter prepared to hit the waves. He has water skied since he was a kid, an experience he now shares with his daughter.

“Mitch is very proud,” Shelly said.“We are so thankful for the program, otherwise we wouldn’t be able to do this.”

Before the skiers arrived, professional water skier and Prior Lake City Council member Kevin Burkart gathered 30 volunteers into a huddle on the drenched and muddy grass hill leading down to the private Quarry Lake in Shakopee.

Minutes away from the inaugural Shockwaves adaptive ski clinic, Burkart led a safety meeting that was equal parts motivational speech and getting down to business.

Only three members, including Burkart, participated in adaptive skiing before last Tuesday.

For newcomers, Burkart reiterated safety is the primary objective.

“It can be an intimidating environment. Remember they are guests of ours,” Burkart told the volunteers, whom he hopes will return for more adaptive ski clinics in the future. “Create a relationship. Let’s make it happen.”

For the next three hours, Burkart’s team enabled 14 athletes with various mental and physical disabilities to do the seemingly impossible.

Catherine Johnson, one of the volunteers at the registration table, joined the Shockwaves performance ski team eight years ago.

“It’s fun to see people who aren’t usually able to do this being active in the community,” said Johnson, who has water skied with her family since she was 3 years old.

Mitchell Tanquist, 14, of Burnsville and Ashlyn Markovich, 17, of Shakopee can’t usually strap on the skis and go.Mitchell has spastic diplegia, a form of cerebral palsy, which prevents him from walking on his own and makes doing things especially difficult, according to his mother Kristy.

“This is awesome,” Kristy said. “It’s just something that he’s never going to have the chance to do otherwise.”

“He was strong on attitude and will,” Burkart said. “He was able to get in two sets of skiing with a huge smile and an infectious personality. It’s exactly what we wanted to accomplish.”

“It was fun,” Mitchell said.

He plans to return to Shockwaves adaptive clinics in the future.

“We would love to come back,” Ashlyn’s mother Melissa said. “If there’s an opening we’ll take it.”Melissa was joined by her husband Michael in cheering on their daughter’s first ever water-skiing endeavor.

“I was really nervous, but she did great. They said she was smiling the whole time,” Melissa said, as Michael hugged a wet, shivering, still smiling Ashlyn. “We felt like she was safe and everyone was really knowledgeable.”

Angels on the lake

Returning triumphant from her laps around Quarry Lake, Meghan Lannon had only one regret from her first water skiing experience.

Otherwise, Lannon said she had fun, smiling as she returned to the embraces and cheers of her family.

When asked if she felt nervous before going out, Lannon responded, “My grandparents watched over me. They’re my guardian angels.”

And though they sported water skis and white Shockwaves T-shirts instead of wings, the volunteers who participated in that first clinic were also like guardian angels to the many participants and family members on the lake that day.

“The volunteers are to be commended for their professionalism and graciousness in bringing some joy to our corner of the world,” Burkart said.

For him the highlight of the day was seeing Sam Campion, Burkart’s sponsee of 18 years who is quadriplegic, go out on the water and experience what all the sponsors, volunteers and coaches had been working toward and hoping for.

“Once Sam felt the rush, the freedom, the endorphin release and the splash of water behind the boat, he screamed with happiness,” Burkart said.

“Hopefully it brought him a short reprieve from the challenges he faces every moment of every day.”

“Once Sam felt the rush, the freedom, the endorphin release and the splash of water behind the boat, he screamed with happiness."