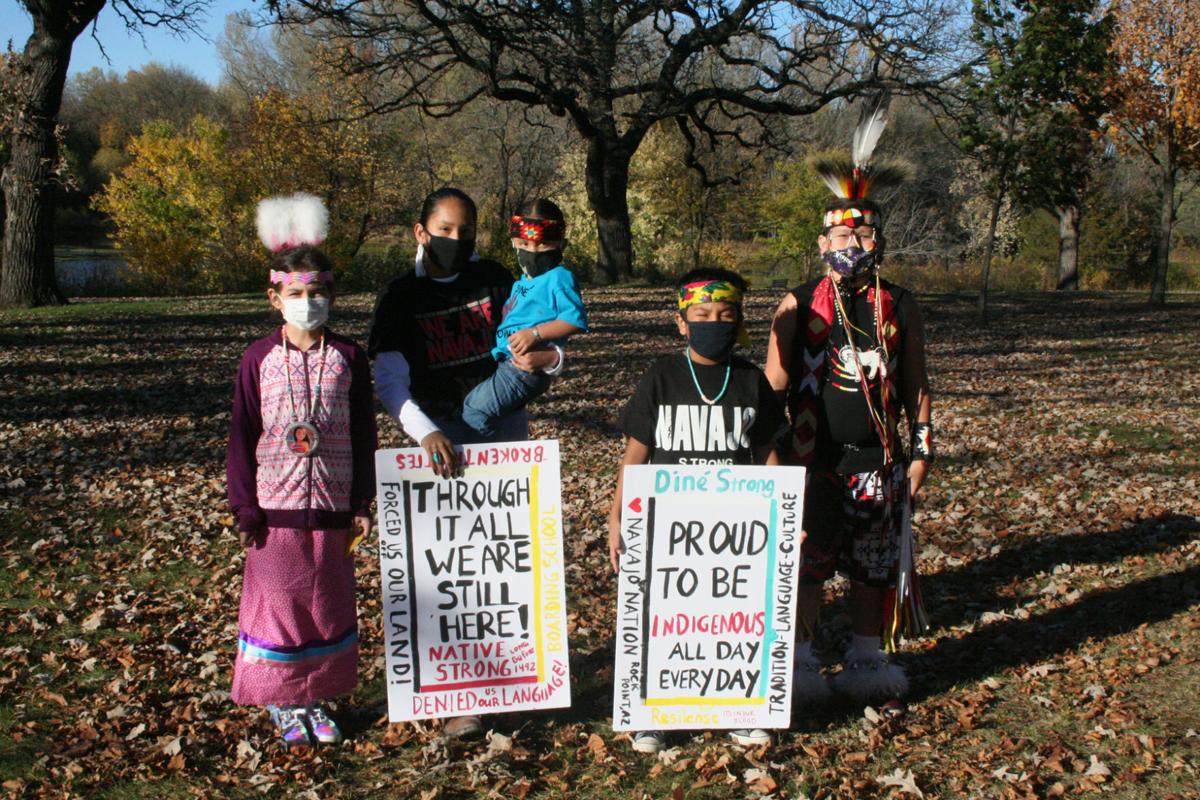 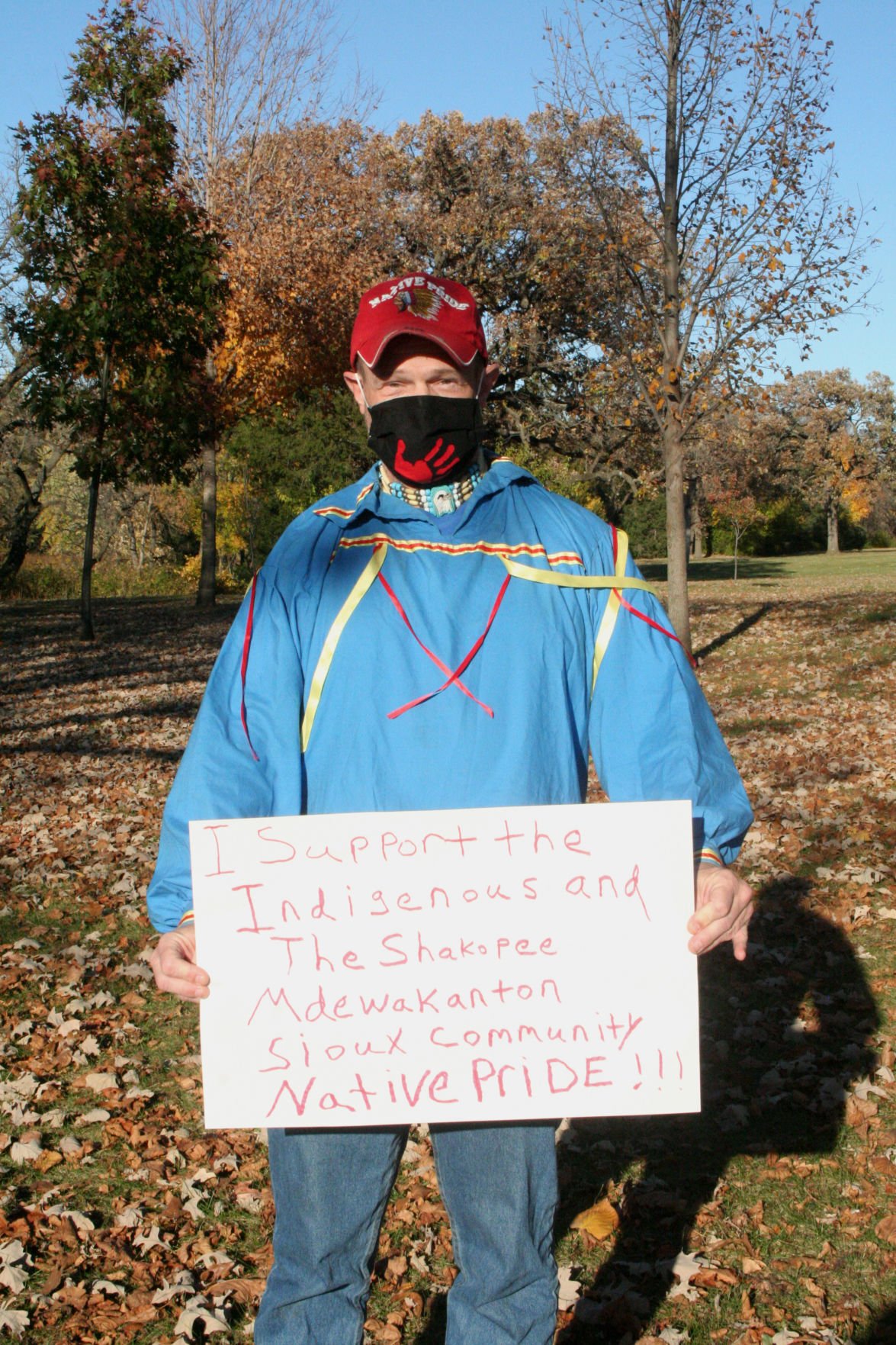 Douglas Norland shows his support for Native Americans during the Native Youth and Families Indigenous Walk. 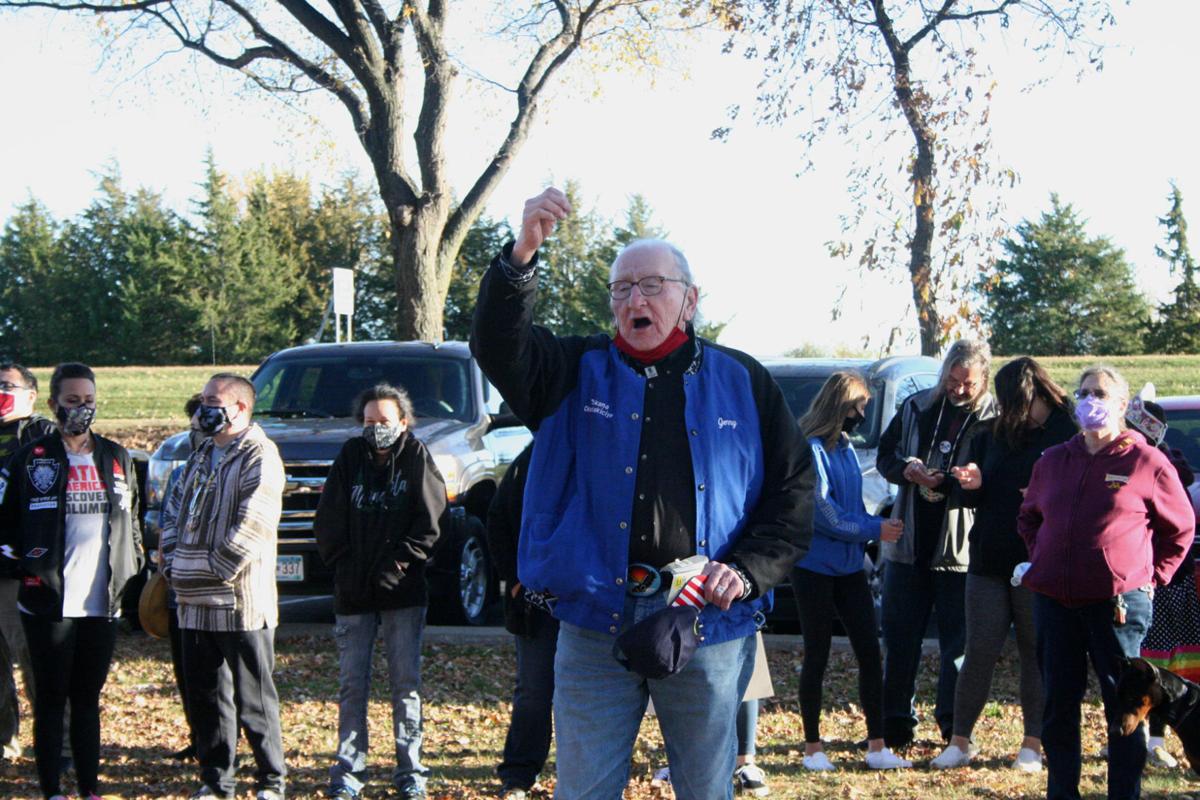 Tribe elder Jerry Dearly leads attendees of the Native Youth and Families Indigenous Walk in a four directions prayer before the group walked to the Indian Burial Grounds at Shakopee’s Memorial Park. 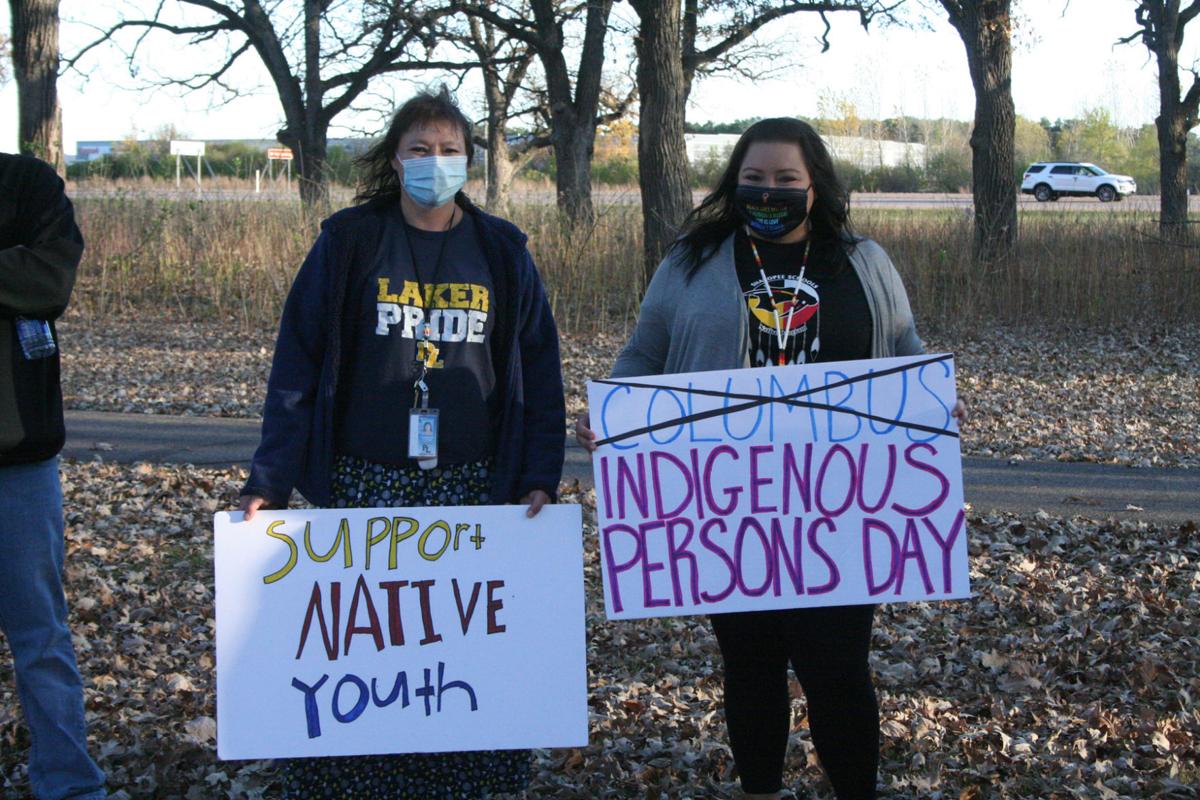 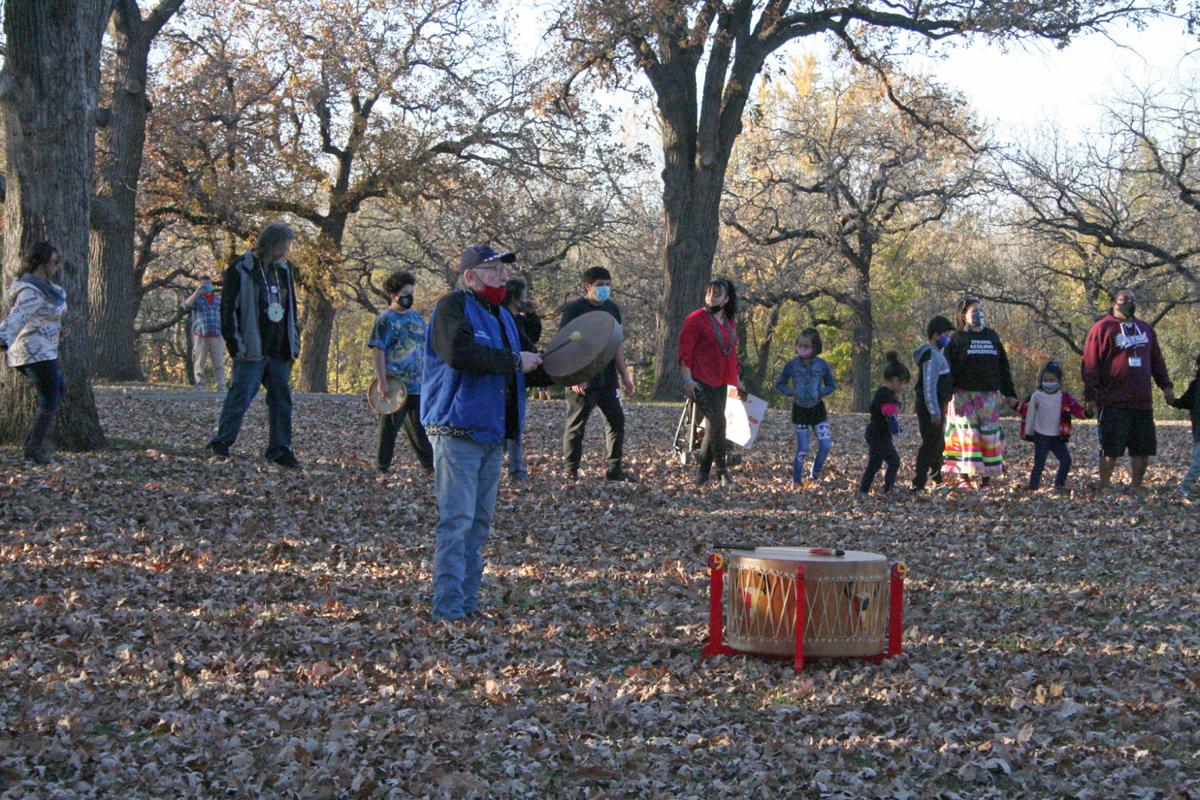 Tribe Elder Jerry Dearly plays a hand drum as attendees of the Native Youth and Families Indigenous Walk side-step in a circle at Memorial Park. Dearly spoke of the importance of cultural education and passing along tradition.

Douglas Norland shows his support for Native Americans during the Native Youth and Families Indigenous Walk.

Tribe elder Jerry Dearly leads attendees of the Native Youth and Families Indigenous Walk in a four directions prayer before the group walked to the Indian Burial Grounds at Shakopee’s Memorial Park.

Tribe Elder Jerry Dearly plays a hand drum as attendees of the Native Youth and Families Indigenous Walk side-step in a circle at Memorial Park. Dearly spoke of the importance of cultural education and passing along tradition.

The pound of a hand drum resonated among the crowd of Native Americans as they side-stepped in a circle, many wearing traditional regalia or ribbon skirts to honor their Indigenous heritage.

Nearly 100 people gathered at Shakopee’s Memorial Park Monday afternoon for the first annual Native Youth and Families Indigenous Walk. Non-Natives and members of various tribes including Navajo, Ojibwe and Dakota were present to celebrate Oct. 12 as Indigenous Peoples’ Day with a walk from the west end of the park to the Indian Burial Grounds on the east side.

Historically, Oct. 12 has been regarded in the United States as Columbus Day to commemorate Christopher Columbus’ landing in America in 1492. But a growing number of cities and states are now recognizing the date as Indigenous Peoples’ Day to celebrate those who first occupied the land.

“We want our community and our teachers to focus on Native American culture as we were here before Columbus so we try not to represent Columbus in a positive way. There was a lot of trauma and historical things that were not right in the past in portraying the Native culture so were trying to be more positive and correct it and make sure that Natives aren’t left out,” Lyons said.

The group gathered Monday afternoon around elder Jerry Dearly who spoke of the importance of passing along cultural traditions, language and pride to Native youth before leading them in a four directions prayer.

Students and families from south of the river schools were invited to the event to share with others what it means to be Indigenous. For Jessica Glidden, Shakopee Indian Education Parent Committee Chairperson, being Indigenous “means carrying on some of our traditions being connected with mother Earth and the people around us and just living more authentically and freely, not in such a fast-paced world.”

The gathering was an opportunity to bring together individuals from all nations and help Native youth reconnect with their culture, she said.

Attendees walked through the park with signs in hand reading, “Through it all, we are still here,” “Proud to be Dakota Ojibwe” and “Support Native youth.”

“The youth are our future,” said Lyons. “They’re the next generation and we want to make sure they have strong family and community ties with the culture so that when they grow up they’re able to pass on traditions with their own families.”

Typically the tribes would gather for a powwow to celebrate their people, but the pandemic led them to exploring other options and ultimately organizing the first-ever walk.

Lyons said coming together with other Indigenous people gave her a feeling of strength and positivity.

“We’ve gone through a lot of assimilation, genocide issues, colonization, so we want to make sure that we’re represented in a positive manor,” she said. “This isn’t a rally, this isn’t anything negative, this isn’t a protest, we’re really just trying to put a positive light and focus on Indian culture.”

Lyons said Natives are interesting people with a rich history.

To her being Native “means that I walk in the steps that my grandparents and my parents put forth for me to understand the cultural traditions and values of the way that we were raised historically,” she said. “We used whatever resources were available on our land, so to me that’s a really important part of being Native is being able to use our resources that are available in our region.”

Both Lyons and Glidden encouraged non-Natives to research the history and culture of Indigenous people.

“If you’re unsure just have those conversations,” Glidden said. “There’s a lot of Native youth in the schools that would be willing to share their stories. There’s Native staff, elders in the community that would love to share our stories and get accurate information out there and correct curriculum for kids in the school.”

The public can learn more about the Mdewakanton Dakota people by visiting the Shakopee Mdewakanton Sioux Community’s cultural center Hocokata Ti or shakopeedakota.org.