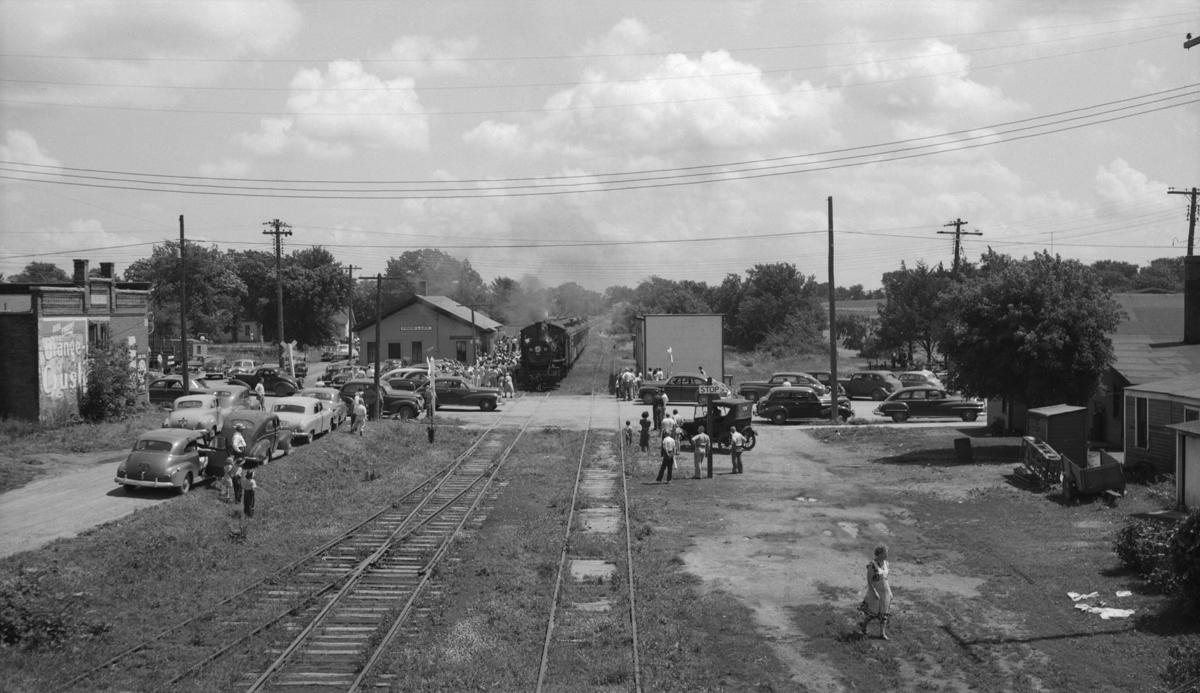 This is the intersection of today’s Main Avenue and Highway 21 in July 1950. The railroad right of way became Highway 21 when the tracks were abandoned in 1980. Highway 13, then on Main Avenue, crossed the tracks, and continued south and west out of town on Pleasant Street and Duluth Avenue. I was six years old and was standing alongside my grandfather in the crowd gathered on the depot platform when railroad photographer Ron Nixon snapped this image. Grandfather and I were passengers on this Minnesota Railfans Association special excursion to commemorate what would be one of the final trips of a steam locomotive on this branch line.

Three years later my parents moved to Bloomington, and on summer Saturdays my dad and I would come to Prior Lake, rent a boat at a resort near what is now Lakefront Park and go fishing. Main Avenue, then, had all the businesses and amenities typical of a small town: hardware store, grocers, drug store, cafes, a clinic even a movie theater, but all of that would shrivel and disappear in the late 1950s when the Minnesota Highway Department built a new Highway 13 cutting off and bypassing downtown Prior Lake. Sixty years later, we are still dealing with the effects of that bypass.

Road building and untrammeled development have decades long consequences. We weren’t as aware, or as sensitive in the 1950s and 1960s, and allowed dozens of Main Avenues and streets and neighborhoods, and historic buildings in Minnesota and across the country, along with the history and the stories that came with them, to be wiped out, and the landscape thoughtlessly blighted with asphalt and concrete and subdivisions. Cars were more important than people and neighborhoods and businesses. Creative destruction dictated that the old had to make for the new, and there were plenty of road builders and developers eager to make money to make sure that it happened — and, regrettably, it did.

The question, locally, is whether Prior Lake has learned anything from the consequences of this experience. We’ll know for sure in a few months when the Highway 21 Downtown Committee completes its work. It was 10 years ago when my wife and I returned to Minnesota and settled in our 100-year-old house on Pleasant Street, only to discover a few weeks after we moved in, that the city and the county had plans to close Main Avenue at Highway 21 and build a new bypass route for Highway 21 through our neighborhood, isolating the downtown, and bulldozing a dozen homes. The neighborhood and downtown businesses rallied and fought back. We picketed city hall and, best of all, won. The plan was dropped, but it hasn’t completely gone away, because, since then, there have been more iterations of the same plan, all of them putting cars before businesses, neighborhoods, and people.

Elections have consequences, and with a new mayor, council and county commissioner there’s a more open and thoughtful approach to the changes and challenges confronting Highway 21 and the downtown. The official arrogance is gone. Now, there are alternatives. Go to: clients.bolton-menk.com/movingforward13-21/public-involvement. See for yourself and get involved. Bring along an open mind, but, also, a skeptical attitude. We’re not there, yet.

John Diers is a Prior Lake resident who spent 40 years working in the transit industry and is the author of “Twin Cities by Trolley: The Streetcar Era in Minneapolis and St Paul” and “St. Paul Union Depot.” To submit questions or topics for community columnists, email editor@plamerican.com. (Editor’s note: Diers is a community columnist and not employed by, or paid by, the newspaper.)