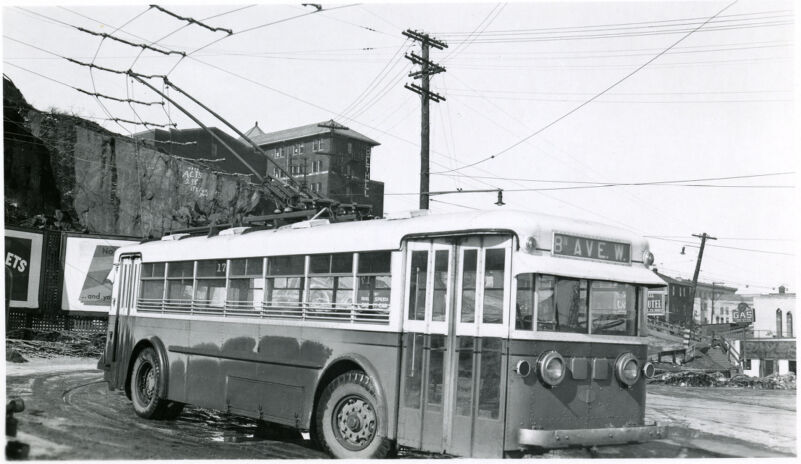 Old technologies never seem to go away, but come back in response to fresh opportunities — like climate change. Consider electric automobiles and trolleybuses.

In the late 19th century European inventors began experimenting with small battery powered vehicles. The first electric car in this country made its debut around 1890 thanks to the ingenuity of a Des Moines, Iowa chemist. By 1900 there were electric taxis in New York City, and, for a decade the electric car held sway.

Then came Henry Ford and the gasoline-powered, mass-produced Model T. By 1910 you could buy a model T for $700. An electric roadster cost $1,700. The market had spoken.

There were consequences: As automobiles proliferated, electric street railways and bus systems lost gobs of riders and revenues. The Twin City Rapid Transit company carried 220 million riders in 1920. Thirty years later over half of them were gone. The proliferation of automobiles and the Great Depression forced economies. Conductor jobs disappeared as streetcars converted to one-person operation. Suburban services to Lake Minnetonka and Stillwater were abandoned, schedules cut, and system expansion halted.

There was a brief recovery during World War II, but streetcars succumbed to buses in 1954. Other smaller, city systems around the country gave up and abandoned operations or were absorbed by government authorities.

The Duluth Street Railway, serving both Duluth and Superior, Wisconsin, stopped being a street railway altogether and switched to trolleybuses. The trolleybus runs on rubber tires and takes 600-volt electric power from two overhead wires. The two wires are needed to complete the circuit. Streetcars use the rails.

Unlike streetcars, trolleybuses can move in, and around, street traffic and board passengers at the curb. However, their complex system of overhead wires is considered unaesthetic by some. That and being tethered to a fixed power source limits their flexibility if rerouting becomes necessary. Duluth converted it’s streetcar system to trolleybuses in the 1930s. It’s Trolleybuses disappeared in 1957.

Except for a brief experiment in the 1920s, Minneapolis and St. Paul never used trolleybuses. But other cities, notably Boston, San Francisco, Philadelphia and Seattle acquired large trolleybus fleets and continue to use them to this day. Electric buses are the future and trolleybuses could make a comeback.

Battery-powered buses have limited range and need long charging times. None of them can go out at four in the morning and stay in service until 2 a.m. the next day.

With the climate crisis, trolleybuses are getting a careful, second look. This presumes there is a future for big city transit systems and the downtowns that support them. COVID crashed transit ridership on every major system in the US. The Met Council reports the Twin Cities lost 56% of its ridership in January-March 2021 compared to 2020. Local bus routes and the two light rail lines held on to some riders, but express bus service and Northstar Rail were hit hard.

It’s especially tragic for those of us who worked for the Metropolitan Transit Commission in the early 1970s and saw ridership come back from its low point in the 1950s and 1960s. Improved service, new routes, new buses and light rail made a difference and brought ridership to almost 83 million in 2019.

There is always reason for optimism, but we have a long way to go.

John Diers is a Prior Lake resident who spent 40 years working in the transit industry and is the author of “Twin Cities by Trolley: The Streetcar Era in Minneapolis and St. Paul” and “St. Paul Union Depot.” To submit questions or topics for community columnists, email editor@plamerican.com.