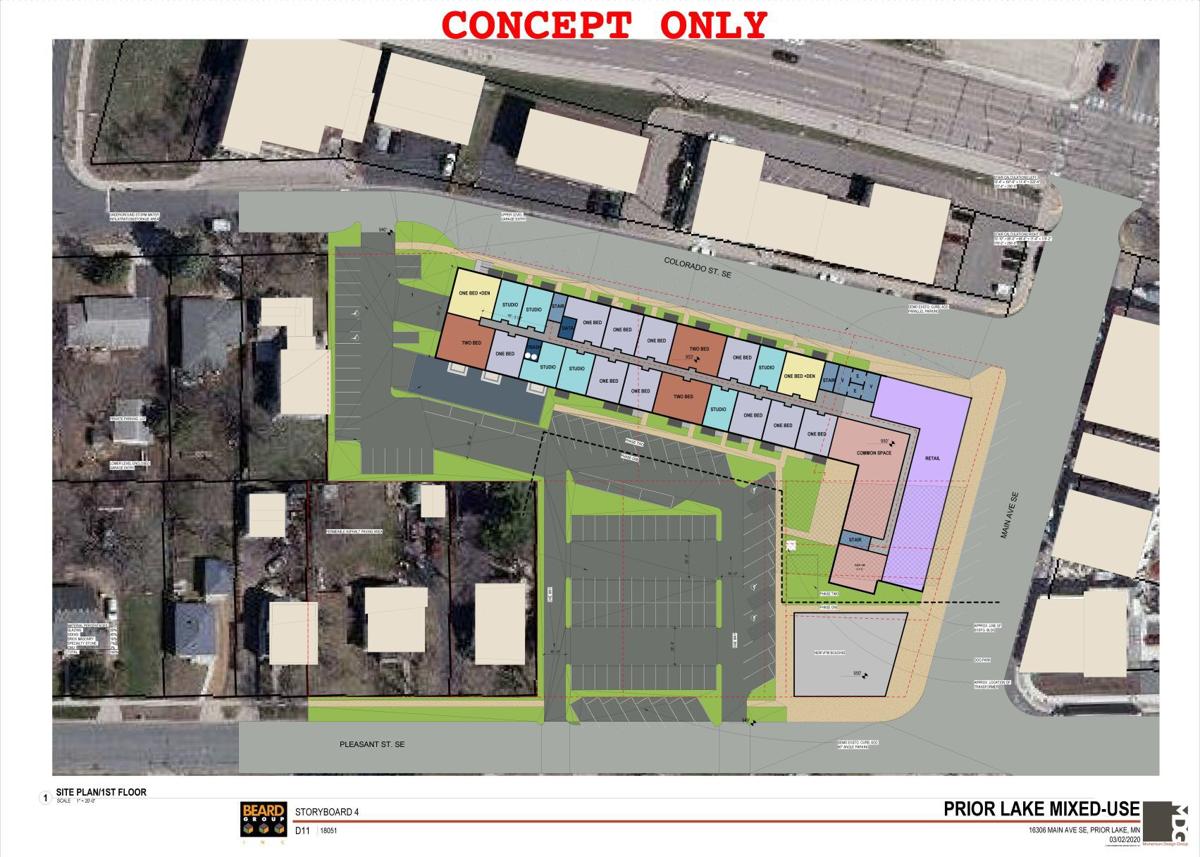 Representatives from the Prior Lake VFW and Beard Group presented this potential development concept plan to city council members during a March meeting. Plans for the project have been put on hold as the VFW’s revenue has been impacted by coronavirus shutdowns. 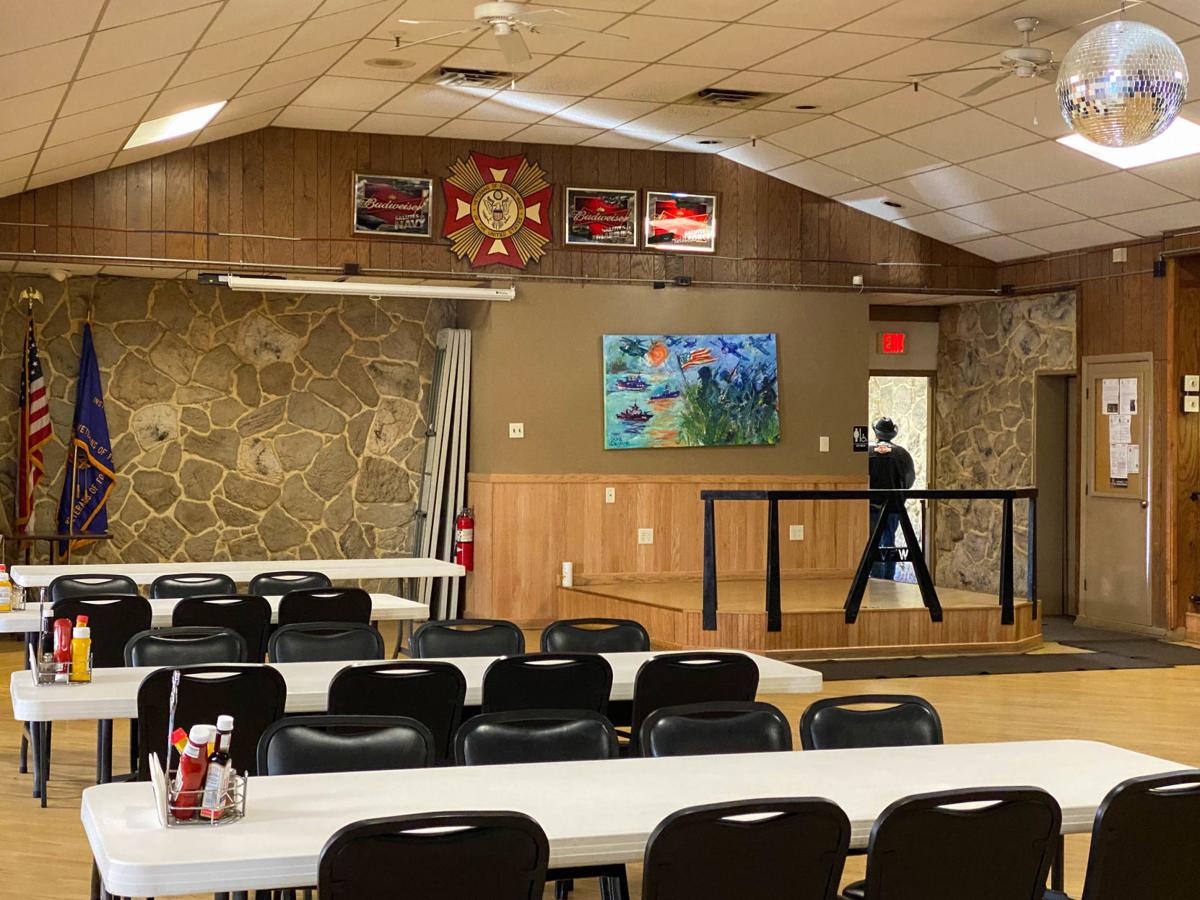 The VFW building in Prior Lake is in constant need of repair and updates, Post Quartermaster Ed Speiker said.

Representatives from the Prior Lake VFW and Beard Group presented this potential development concept plan to city council members during a March meeting. Plans for the project have been put on hold as the VFW’s revenue has been impacted by coronavirus shutdowns.

The VFW building in Prior Lake is in constant need of repair and updates, Post Quartermaster Ed Speiker said.

Construction planned for this week on a new Veterans of Foreign Wars building in downtown Prior Lake has been placed on an indefinite hold, as the coronavirus pandemic has brought uncertainty to the local post’s financial outlook and the future of a major downtown redevelopment project.

Representatives from the city, VFW and potential developer Beard Group all said they’re hopeful movement on the project will restart next summer.

Earlier this year, the post was on the brink of embarking on a major redevelopment. Plans were drafted for a two-story building that would be home to the organization’s restaurant, bar and dance floor on the main level, and a new meeting space and event center on the second.

Post Quartermaster Ed Speiker has called the project a much needed update, citing major and expensive repair needs in the post’s current 1930s-era building on the corner of Main Avenue and Pleasant Street.

Members agreed to support the project that was estimated to cost between $2.9 and $3.1 million, according to Speiker. He said the post secured funding for about $2.5 million of the project’s costs when the pandemic hit.

The post is supported primarily from member dues and revenue from the restaurant. Gov. Tim Walz ordered in early March all bars and restaurants shift to carryout service only in an attempt to reduce high contact and congregate situations which help spread the virus.

“Not knowing if or when the VFW could or would reopen, it would not be prudent to move forward with a $3+ million dollar project from the VFW’s standpoint,” Speiker wrote in an email Tuesday.

Speiker said even as restaurants and bars have been allowed to reopen and welcome back customers with social distancing and cleaning protocols, customers have stayed away from the building and other Prior Lake eateries. He said business is about 10% of what it normally is for the restaurant.

He said that the post hopes to raise enough capital in the next six to nine months to comfortably fund the general design for the new building. All the while, the building continues to put “bad money after bad money” according to Speiker, toward expensive air conditioning and electrical repairs.

Speiker said he’s now going over every program cost with a fine-tooth comb and seeing where savings can be made. He said as the pandemic forces more and more restaurants and businesses to close their doors, the VFW may be able to get a better deal on kitchen and electrical equipment.

The pausing of the new VFW building halts larger plans for a major redevelopment of the south side of Prior Lake’s downtown area.

In March, the developers, city officials and representatives from the VFW met to present design concepts for the larger plan for the area to the Prior Lake City Council.

The plans from developers at Beard Group envisioned a four-story apartment complex with 114 market-rate and luxury apartment units, 7,000 square feet of retail space, a rooftop deck and two levels of underground parking on the corners of Main Avenue and Colorado Street.

The redevelopment was set to coincide with two city road projects on Main Avenue and Pleasant Street, to reduce the impact for neighbors and downtown businesses.

Though the absence of a new VFW building means that integral plots of land won’t be available for construction.

The VFW was supposed to sell its building and parking lot properties to the city, which would then sell the plots to Beard Group. The profits from the sale would finance part of the VFW’s purchase of the next-door city-owned lot for its new building.

In anticipation of the deal, the Beard Group bought the Sebastian Automotive location and another privately owned property on the same block.

The Prior Lake City Council in January approved a purchase agreement between the Beard Group and the city’s Economic Development Authority essentially guaranteeing that the city will buy the two privately-owned pieces of land if Beard’s development doesn’t happen in the next year or two.

Community Development Director Casey McCabe said that at least one of those agreements is still active, meaning the city could be on the hook for $350,000 come January 2021.

Both McCabe and Beard Group President and CEO Bill Beard said that a potential extension of those purchase agreements will be on the table during a city-developer discussion next week.

Speiker, McCabe and Bill Beard all emphasized that for there’s still a lot of hope and excitement for this project on their ends.

Beard said, if anything, the pandemic has shown him the necessity of additional housing options in Prior Lake.

“With everything that we’ve seen, we don’t see the demand for luxury apartments abating — in fact it may be increasing,” Beard said. “It’s really going to depend on what’s going to happen with the VFW.”

Editor's note: According to city officials the open house listed in this article has been postponed as part of a community response to mitigat…