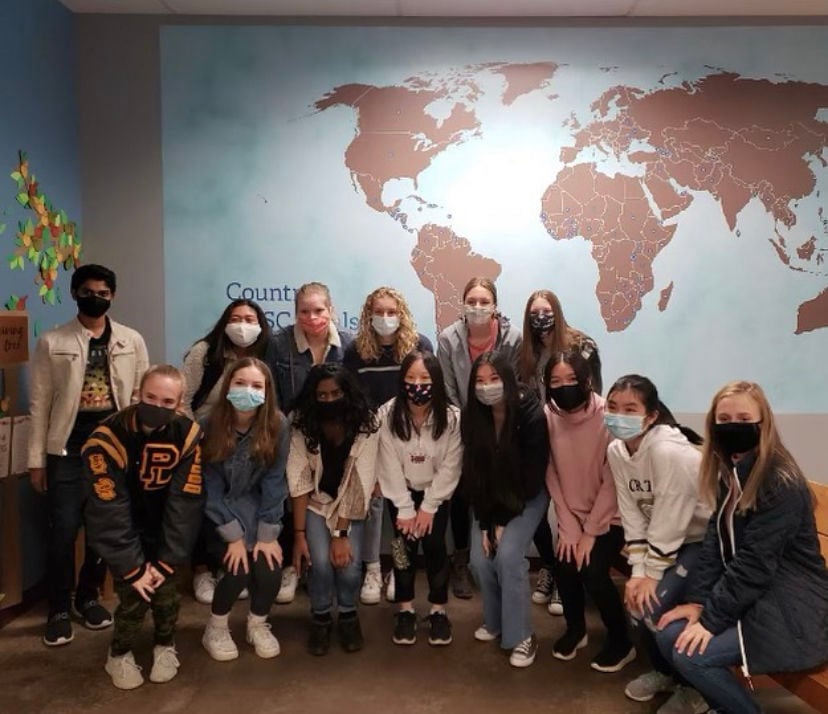 Members of the Prior Lake High School Junior Optimist Club participated in a Feed My Staving Children packing event which helps provide meals to third world countries. Only a limited number of volunteers were able to participate in the packing event this year due to COVID. 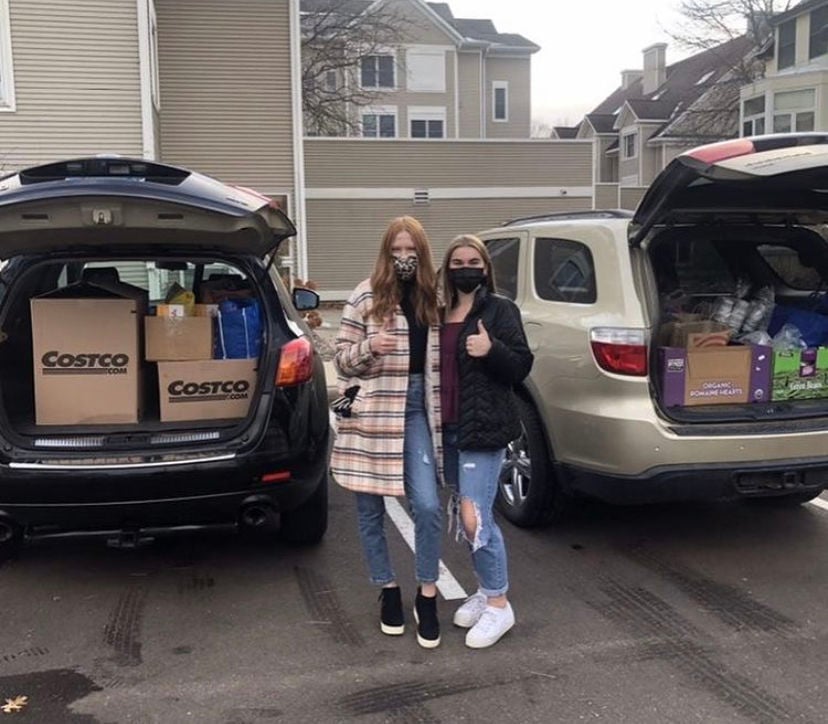 Maddie Knudson (left) and Riley Haferman participated in a packing event at Ronald McDonald House for a service project with the Prior Lake High School Junior Optimist Club. The club grew to 90 members this year and was recognized by the Optimist International organization as an Honor Club for its growth. 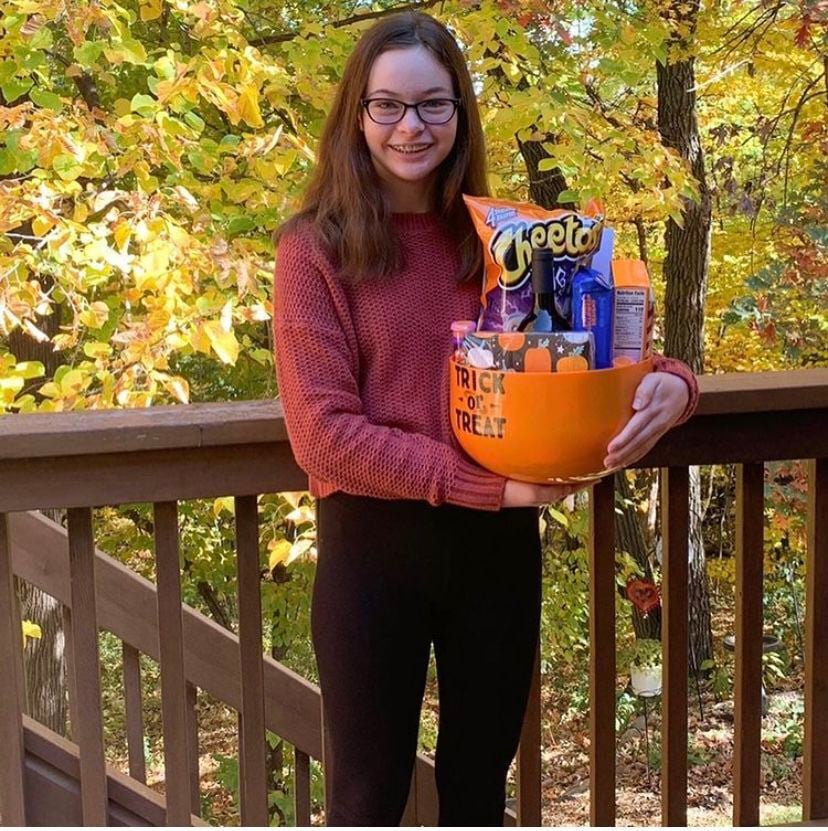 Members of the Prior Lake High School Junior Optimist Club participated in a Feed My Staving Children packing event which helps provide meals to third world countries. Only a limited number of volunteers were able to participate in the packing event this year due to COVID.

Maddie Knudson (left) and Riley Haferman participated in a packing event at Ronald McDonald House for a service project with the Prior Lake High School Junior Optimist Club. The club grew to 90 members this year and was recognized by the Optimist International organization as an Honor Club for its growth.

During the holidays we’re reminded of the importance of spreading joy and participating in acts of kindness both large and small and as the pandemic continues, such acts have become even more meaningful.

For a group of Prior Lake High School students, spreading kindness in the community is year round and the pandemic hasn’t slowed them down.

The Prior Lake High School Junior Optimist Club is made up of 90 members and is the largest junior club in the Midwest. Optimist International recently recognized the PLHS club as an Honor Club for its tremendous growth.

Optimist International is a service organization that focuses on bringing out the best in youth. Within the organization are junior clubs, which help youth better their communities and learn leadership skills through service projects.

When COVID hit and the possibility of all students participating in in-person learning grew slimmer, PLHS Junior Optimist Club Advisors Maria Belden and Dan Steger “were afraid that we were just going to slog through this year,” Steger said.

The club typically recruited most of its new members through a freshman orientation event, which was cancelled due to COVID. The advisors tasked a few sophomores with spreading word of the club through the school. The students organized and with just a widely-shared Google document, the club had its largest year of recruits yet with 50 new members, nearly doubling the club in size.

In the past, members have participated in book and clothing drives, clean ups and volunteered at city events. They’re still participating in such projects, but now the student members are taking the lead and deciding what projects they would like to dedicate their time to.

“In the last year, we’ve really pushed for the kids to generate the ideas,” Steger said. “They’re really fired up this year because of that opportunity which we basically said this is your club and you do whatever you want. If you have an idea, we’ll help you make it happen. They’re coming up with all kinds of things that we’ve never done before.”

Members taking on more leadership responsibilities has been one of the highlights of sophomore Riley Haferman’s time in the club.

In her first year in the club, Haferman helped prepare food for the families at a nearby Ronald McDonald house. While preparing food wasn’t an option this year, she and another club member did have the chance to organize a donation to the Ronald McDonald families.

It’s been a fun and gratifying experience to give back to the community with the Junior Optimist Club, she said.

“You can help others and you can do it with people you love,” Haferman said.

But like most other things, COVID has made doing good in the community more complicated.

With most schools in the county completely switched to remote learning, the club is now meeting via Google Meet instead of in a classroom to discuss their project ideas.

They’ve still been able to participate in some of their usual projects just with some modifications. Each year, members pack meals to be shipped to third world countries for Feed My Starving Children, but this year only so many volunteers are allowed at a time.

This has caused the club to shift its focus to more outdoor service projects and acts of kindness they can complete at a distance, such as cleaning up Watzl’s Beach, raking a neighbor’s yard, paying for someone in line behind you and leaving gift baskets on doorsteps with instructions to do the same for someone else.

The Junior Optimist Club is also working to organize holiday projects such as a hat and mitten drive and its members are participating in Toy Corner, which provides toys for local children in need. Donation boxes for Toy Corner can currently be found at Redtail Ridge, Jeffers Pond, Glendale, Five Hawks, Lund’s & Byerly’s and the Prior Lake Library.

Steger is glad to have seen the club grow in such a significant way over the past year. Aside from learning leadership skills, the club provides youth a way to make friends and do something important within their community, he said.

“COVID has screwed up so many aspects of their lives that the opportunity to do something positive is bigger now than ever,” Steger said. “All the crazy stuff that’s going on — COVID and the election and everything else — you’ve got these kids and they’re just fired up about spending a lot of their personal time doing positive things. They’re like this big vat of positive energy that somehow we kind of managed to ignite this year.”

“COVID has screwed up so many aspects of their lives that the opportunity to do something positive is bigger now than ever.”