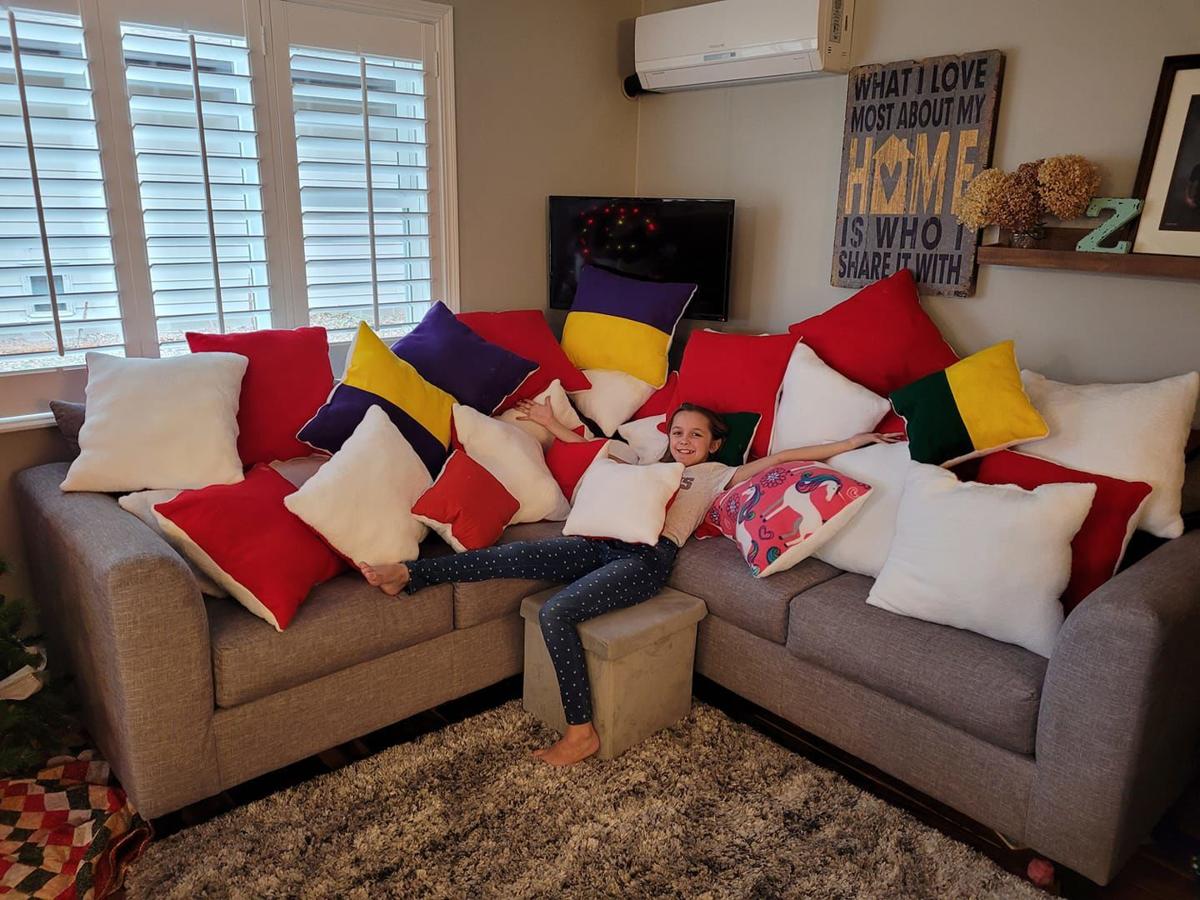 Trinity Zimmermann, 12, of Prior Lake, is surrounded by just some of the many pillows she hand made and sold over the last month. A portion of her pillow proceeds were donated to Lakeside Eats and Treats to help them during the pandemic, but the business will pay the good deed forward. 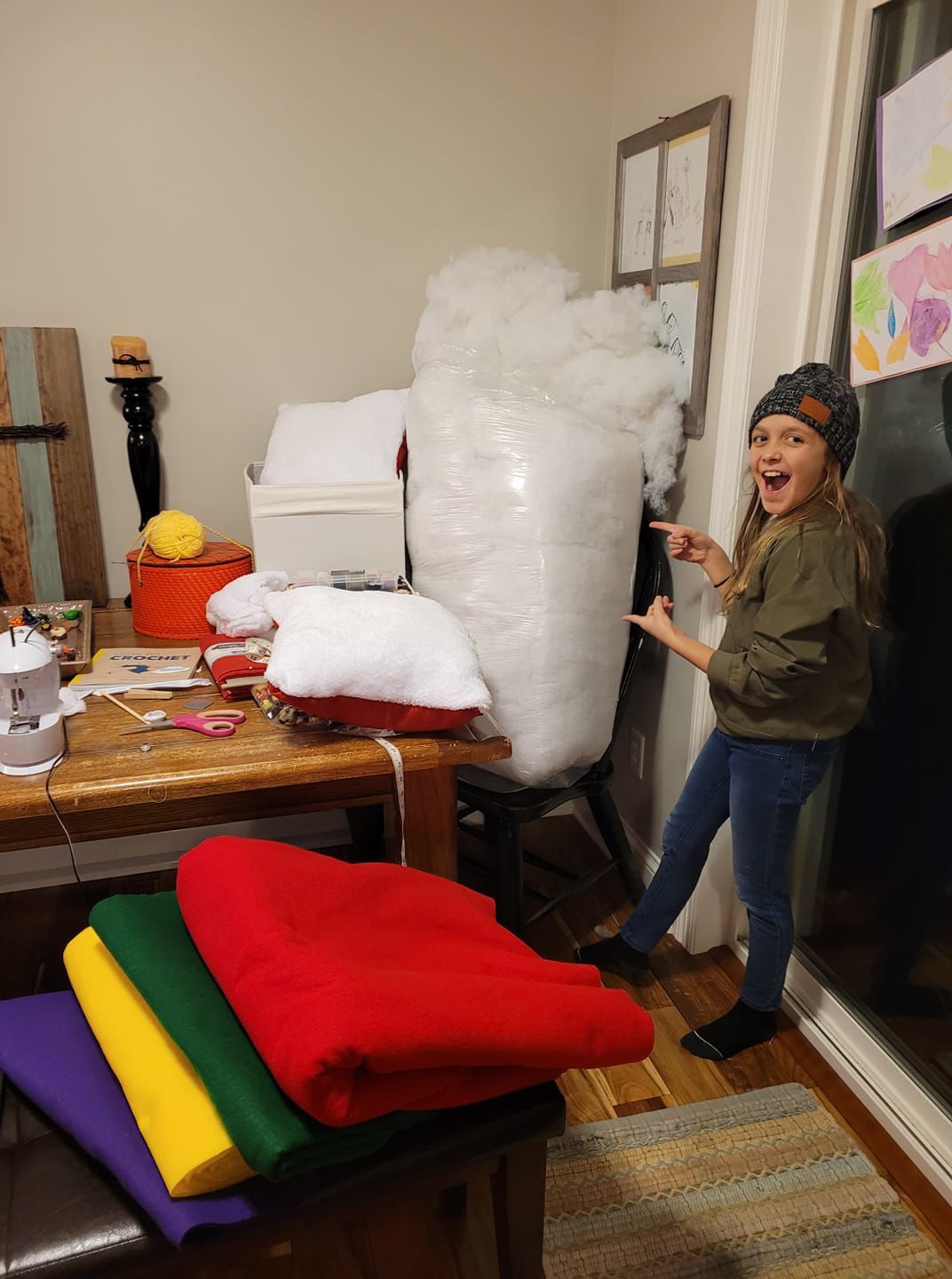 With a children’s sewing machine, yards of fabric and a lot of pillow stuffing, 12-year-old Trinity Zimmermann handmade 55 pillows to sell online.

Trinity Zimmermann, 12, of Prior Lake, is surrounded by just some of the many pillows she hand made and sold over the last month. A portion of her pillow proceeds were donated to Lakeside Eats and Treats to help them during the pandemic, but the business will pay the good deed forward.

With a children’s sewing machine, yards of fabric and a lot of pillow stuffing, 12-year-old Trinity Zimmermann handmade 55 pillows to sell online.

An overflowing bag of cotton stuffing, yards of colorful fabric and the buzz of a sewing machine filled the common space of the Zimmermann’s home in Prior Lake over the last month — all the pieces of a pillow-making operation that inspired a young girl and benefited local businesses.

The pandemic led to the pause and cancellation of many youth sports and when Trinity Zimmermann, 12, found out there would be no basketball season this year, she was crushed. She quickly decided she needed another activity to fill her free time.

Trinity approached her mother Kelly Zimmerman with a big idea. She was going to hand make pillows and asked Kelly to sell them online. Half of the money raised would be donated to Trinity’s favorite Prior Lake business Lakeside Eats and Treats.

She got to work cutting fabric of various sizes and colors and the orders for the pillows started flowing in, keeping her and her little sewing machine busy.

At one point while filling orders, her sewing machine began to malfunction.

“I think that little machine was like what is happening here, I can’t keep up with these pillows,” Kelly said. “My husband had tried fixing it, but it just wasn’t fixable so he was so sweet. He took Trinity to the store late at night and got another sewing machine, a real adult machine.”

She got back to work and completed orders for 55 pillows, some of which were mailed out and others that were delivered to local doorsteps.

The idea to sell pillows to help out a business affected by the pandemic was Trinity’s alone. With just the basic sewing skills learned from her grandmother and some YouTube tutorials, the 12-year-old learned the pillow making process by herself and set out on her goal.

When she asked her parents for help promoting her idea, they were amazed by her plan, but not entirely surprised by her character.

“We were just so proud of her. It makes me emotional,” Kelly said. “She’s always had that spirit, kind of like an old soul or something, where she is very empathetic of other people and wants to give other people her things. That’s always kind of been who she is.”

Besides improving her sewing skills, the project provided Trinity with other learning opportunities.

“We bought that initial material for her and then she had to pay us back,” Kelly said. “We were really trying to teach her how a business works, that was fun for her to learn that.”

A family friend and business owner heard about Trinity’s project and sent her $100 for supplies along with a letter telling her she’s already displaying the mindset of a young entrepreneur.

The process has given Trinity inspiration to pursue her interests and perhaps develop similar ventures in her future.

It also taught her the importance of hard work and remaining dedicated as she often worked late into the night to complete all of the orders.

“My husband and I both are just so proud of her work ethic. That’s a big part of it, not even just her wanting to give to Eats and Treats, but for her to continue this because it did turn into a big project,” Kelly said.

In total, Trinity made around $470 selling her pillows and after covering the cost of supplies half of the proceeds amounted to $150 for Lakeside Eats and Treats.

With a dog printed pillow made especially for Lakeside Eats and Treats Owners Pete and Jen Joas, Trinity and her mom delivered the money to the Prior Lake business.

“He was so appreciative and he wanted to hear her whole story,” Kelly said.

Pete Joas was surprised by her kind act, which he said is another example of the spirit of the Prior Lake community.

“I can’t help but think that there’s people that go for ice cream just for the sake of, OK, let’s go get some ice cream because it’s going to help somebody out,” Joas said. “That’s what we’ve seen and then take something like what Trinity has done that takes the support to the next level.”

And Joas plans to continue with the same attitude. With Trinity’s permission, the Joases’ will use the money to provide some sweet treats to frontline workers.

“It’s our responsibility to expand on that when we can and she just gave us a great opportunity to do something like that,” Joas said. “She brightened our day, let’s brighten someone else’s.”