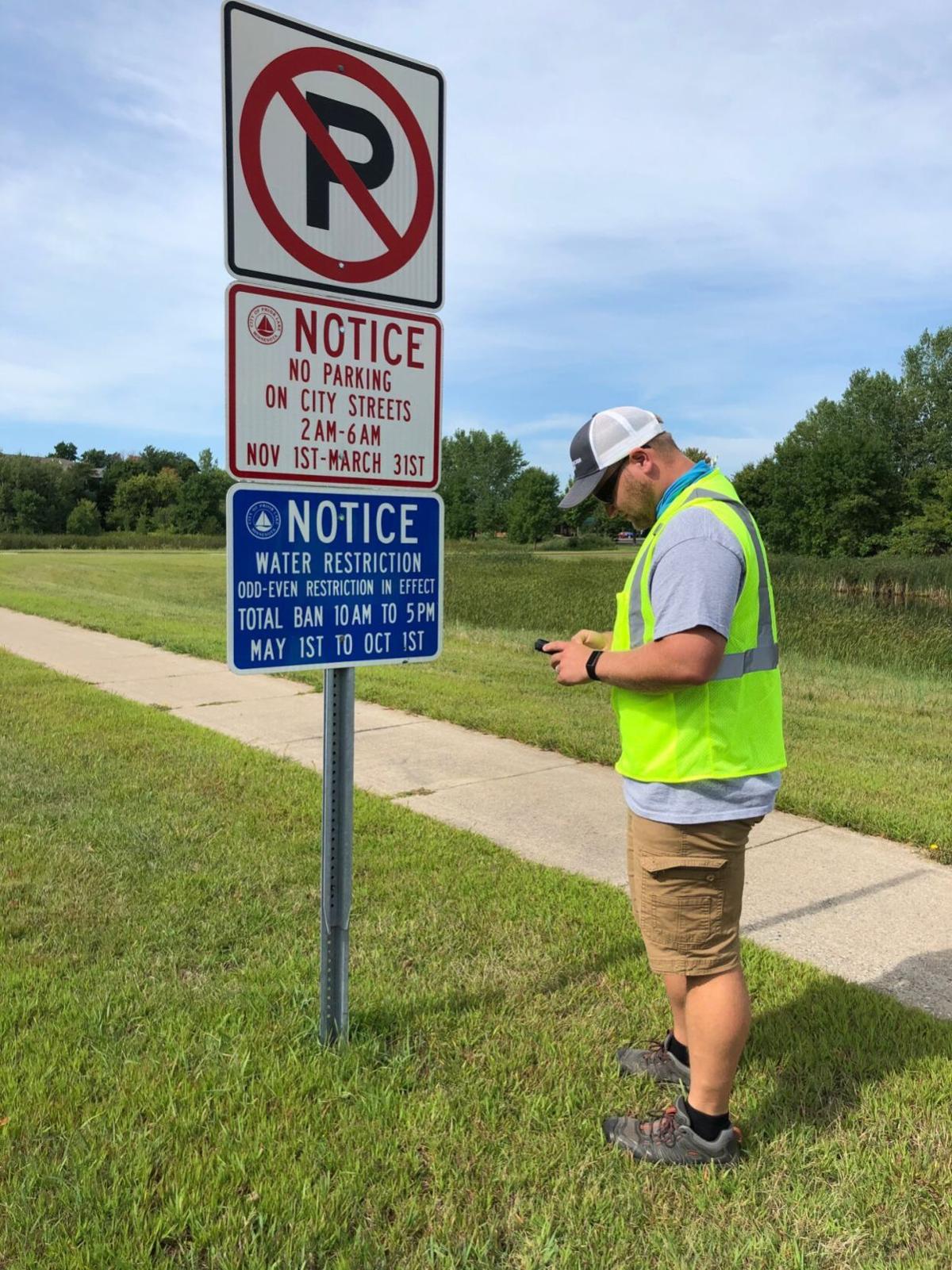 Parks maintenance crew member Anthony Anderson uses the mobile software management system to document monthly playground inspections. He tests out the slide and swings to ensure their safe for use. Citizens will soon be able to submit maintenance requests to the public works management system through a link online.

Parks maintenance crew member Anthony Anderson uses the mobile software management system to document monthly playground inspections. He tests out the slide and swings to ensure their safe for use. Citizens will soon be able to submit maintenance requests to the public works management system through a link online.

You may have seen public works staff on their cell phones throughout Prior Lake recently, but they aren’t checking their phones. Instead, they’re using the new mobile-friendly asset-management software.

Roughly two months ago, the city updated its existing software replacing it with software compatible with desktop computers, for in office use, as well as smartphones and tablets. The update, paid for with water and sewer utility funds, tracks public works assets such as fire hydrants, wells, lift stations, pavement, street signs and more, explained Prior Lake Public Works Coordinator Christine Watson.

Tasks completed by public works staff can be tracked in real time while staff is out on the roads.

“For instance, if one of the guys is out changing a sign — maybe he sees a speed limit sign that is all faded, maybe it’s bent, maybe it’s rusty — he goes out and changes it with a brand new one. He can just open the app on his phone, he can zoom right to that sign, he can click on the sign and indicate that he replaced the sign that day. So not only do we know when it was replaced, who did it, how long it took, what truck or equipment were involved in it, etc.”

The software helps make the workflow of public works staff more efficient, she added, as staff can receive new tasks and requests while they are out on the roads.

“They don’t have to come back here and wait till someone hands them a post-it note about it or something like that,” Watson said. “They can deal with it right when they’re out there, if it’s prioritized as such. They might be working on something else that’s higher priority, but we have the ability to have that almost instant communication with them.”

Previously, if citizens had maintenance requests for staff they would have to call into the public works office. Within the next few days, public works will roll out a link on the cityofpriorlake.com website that will allow requests for things like speeding issues, pothole concerns and street light outages, to be submitted online.

This streamlines the process, saving citizens time and allowing staff to better track the cost and labor associated with maintenance, Watson said.

“We can look back and say we spent this many hours on this type of task last year or this many dollars. It’s going to help us be able to budget more efficiently, more accurately,” she said. “I think that’s always going to help the citizens because we’re just being more wise in how we’re spending the tax dollars.”

Like police and fire, public works staff has a large presence in the community and the mobile asset management system will increase citizen engagement with the department.

“It’s important for them to know we are here to listen to their concerns and we are ready to take action and have that interaction with them,” Watson said. “Sometimes we don’t know about these issues. We rely on them to give us a call and let us know what they’re seeing out there, so we can take care of it.”