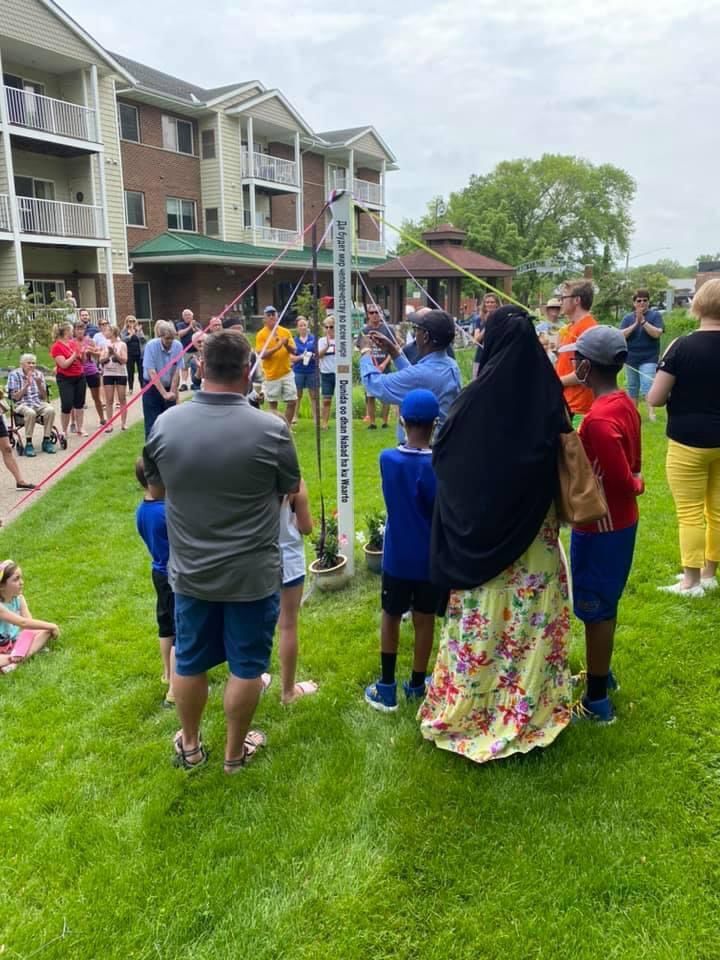 The Prior Lake peace pole was unveiled at Rotary Gateway Park on May 23.

The Prior Lake peace pole was unveiled at Rotary Gateway Park on May 23.

One of Rotary International's areas of focus is peace and conflict resolution. On Sunday, May 23, the Prior Lake Rotary took that cause to heart and brought the community together for a peace pole dedication days before the one year anniversary of George Floyd's death on May 25.

The concept came from the mind of Prior Lake Rotarian Joan Fawcett after she and her husband David, visited George Floyd Square — a memorial site — last year located at the intersection of East 38th St. and Chicago Avenue in Minneapolis.

"The way it came about was the one year anniversary of the death of George Floyd who was known in his community as a person of peace. Growing up in the Twin Cities, I thought we can go and pay our respects there," said Fawcett. "We had to park a couple blocks away and as we walked towards the square and the memorial that was set up, I saw a peace pole. As we were walking back to the car I saw the peace pole again. I stopped and walked around it, and it was just a revelation that all came together for me."

Fawcett said her husband, David, is also a Rotarian from the Tucson Kino Rotary in Tucson, Arizona. She said David's rotary club was developing the idea of installing a peace pole in Tucson and dedicated one to children on April 9.

"David started calling locally here (Prior Lake) and I shared our story, and that's how the peace pole in Prior Lake came about," said Fawcett.

What is a peace pole?

According to www.worldpeace.org, a peace pole is a monument that displays the message, "May Peace Prevail on Earth,” in the language of the country where it has been placed.

The idea of peace poles was first thought up by Masahisa Goi in 1955 in Japan. The first peace poles outside Japan were constructed in 1983. Since then, more than 200,000 have been placed around the world, according to the website.

"The reason Goi created them was due to the the destruction of World War II. He was also thinking about the atomic bombs that were dropped in Hiroshima and Nagasaki. He was just devastated by war," Fawcett said. "Goi wished to spread a message of peace worldwide. He wanted something to symbolize a message of peace."

"The pole is 8 ft. tall. There are four sides and it is about four inches wide and there are two languages on each side of the pole," said Fawcett. "The peace pole was made by ShopPeace. It was planted by Rotarians Mike Finley and Doug MacCallum."

Fawcett added that peace is something she cherishes after personally experiencing racism in her life.

"Ending racism, peace and George Floyd are near and dear to me because I'm Asian American. Having lived as a first generation Chinese, born and raised in St. Paul, I experienced racism every single day of my life," she said. "The message of peace is near to me because I live it. Knowing what happened a year ago, even though I am not of the same race, it doesn't matter. Racism affects everybody. That's another dimension of why the peace pole is so important."