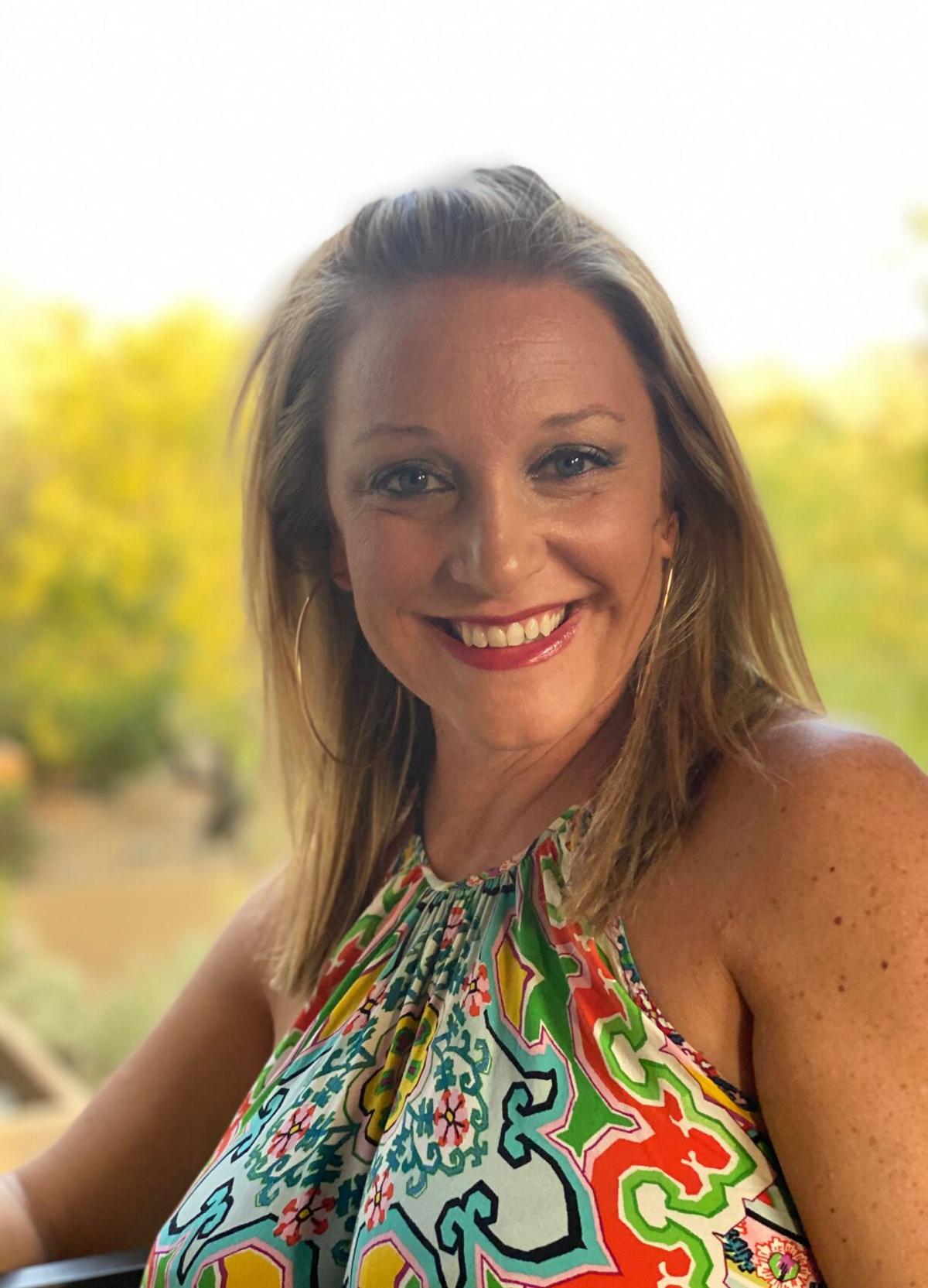 Prior Lake resident Katie Moras was recently awarded the 11th annual Amicus Curiae Award given by the First Judicial District for her service work. 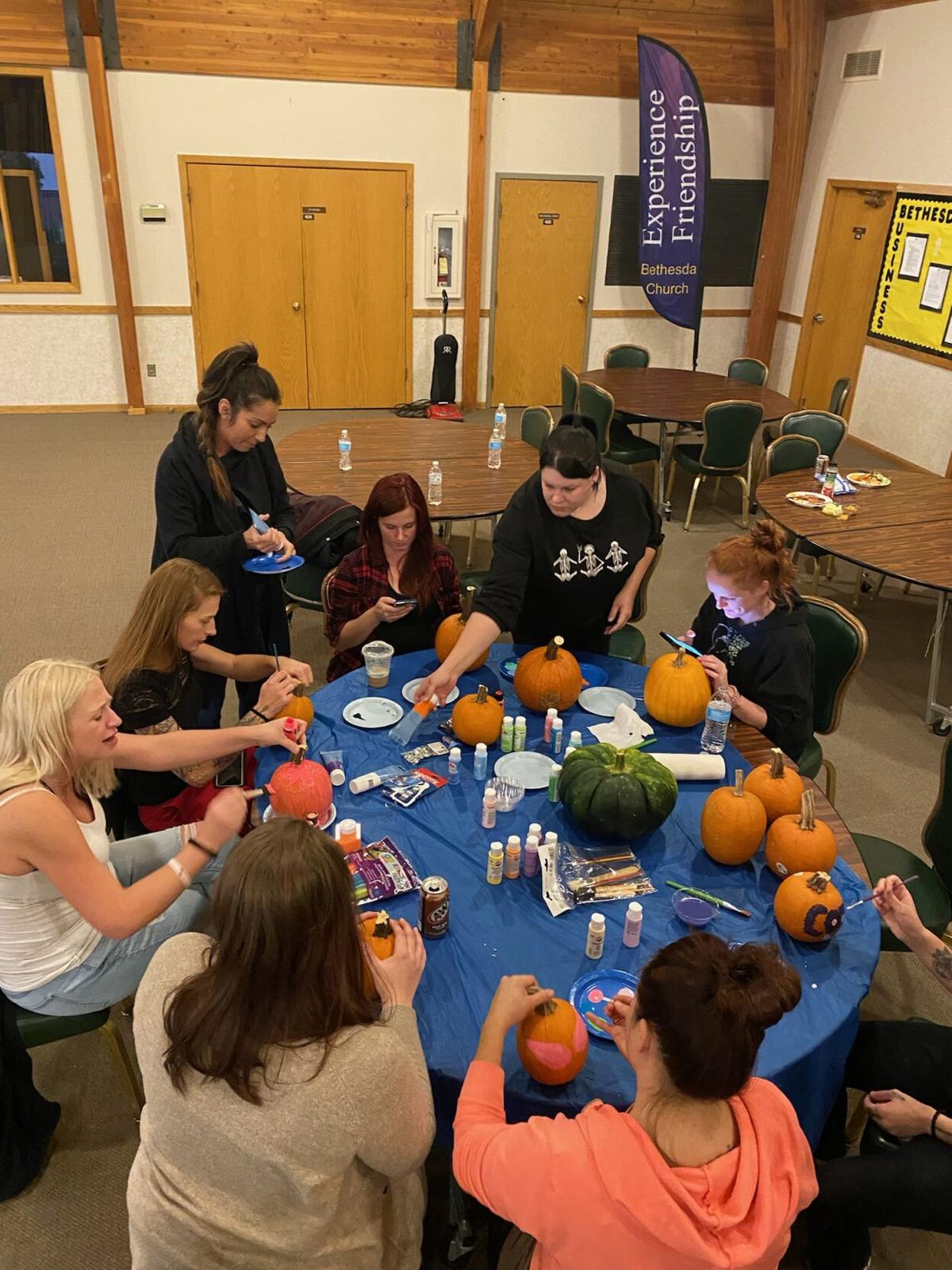 Katie Moras works on crafts with women from Moms on a Mission for Success (MOMS) at her school, El Bosque Encantado, 15033 State Hwy 13 #2000 in Prior Lake. 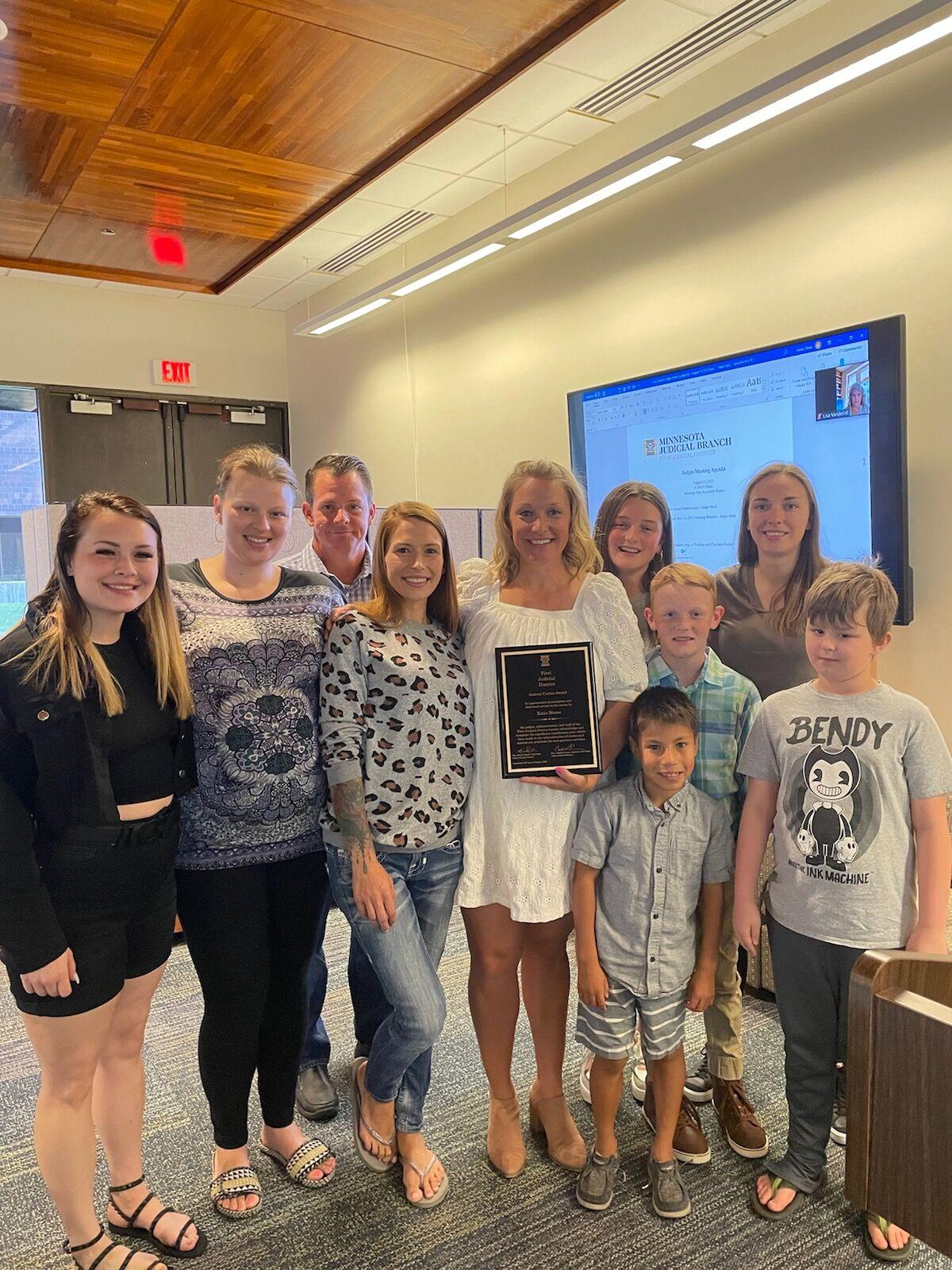 Katie Moras stands for a photo with her award given by the First Judicial District for her service work volunteering and mentoring several participants in the Scott County Treatment Court.

Prior Lake resident Katie Moras was recently awarded the 11th annual Amicus Curiae Award given by the First Judicial District for her service work.

Katie Moras works on crafts with women from Moms on a Mission for Success (MOMS) at her school, El Bosque Encantado, 15033 State Hwy 13 #2000 in Prior Lake.

Katie Moras stands for a photo with her award given by the First Judicial District for her service work volunteering and mentoring several participants in the Scott County Treatment Court.

Prior Lake resident Katie Moras was recently awarded the 11th annual Amicus Curiae Award given by the First Judicial District for her service work volunteering and mentoring several participants in the Scott County Treatment Court.

The Amicus Curiae Award (translated from Latin as “friend of the court”) is an annual recognition of persons who have provided exceptional service, leadership or other contributions to assist the First Judicial District in the administration of justice.

Moras, who is no stranger to community service, founded El Bosque Encantado — a Spanish immersion early learning center on the border of Prior Lake and Savage — has taught in public school and also teaches at the Scott County Jail.

In recognition of her service, Moras said she was very humbled because she learned the award is often given to people with a background in law.

“I was very surprised of course. I didn’t even know that an award existed like that. I don’t have a background in law, so, I did not know that there was such an award,” said Moras. “I was very honored because the award is not often given to community members, I learned. It’s very often given to other lawyers for doing big work within the field, like maybe a lot of pro bono work. I was very humbled that I was one of the few community members to have received the award.”

to GuatemalaMoras said she credits her philanthropy to a life-changing trip she took to Guatemala when she was a teenager.

“When I was 15, I was a sophomore in high school living in Owatonna going to Owatonna Senior High School. There were some exchange students at our school and I met them and got to be friends with them,” said Moras. “At the end of that experience they were going to be traveling home. We started talking about what if we did a reverse exchange where I go to them and that’s how I ended up in Guatemala. I was there in the summer of 1995 and I had my 16th birthday there.”

Moras said she found herself in the Central American country near the end of a 36-year civil war.

“It really changed my worldview coming from a very small town and all of a sudden I ended up in this very large city that’s in civil war,” she said. “While I was there I fell in love with Spanish language and culture. It just sort or became my life’s work professionally since then. I came home and graduated from high school in Owatonna and went to the University of Minnesota–Twin Cities where I graduated with a Spanish degree.”

After graduating from college, Moras worked in corporate America where she used her skills working as a bilingual interpreter for human resources for five years. It was then that Moras decided she wanted to do more with her life and went back to school to earn her teaching license.

“I have a K-12 Spanish teaching license and I taught in the public school setting for seven years. I loved it, it was amazing. I taught at Eagle Ridge Junior High in Savage,” said Moras. “I unfortunately lost my job due to budget cuts and at the time I had two very small children, they were 3 and 1 years old. They were going to a Spanish immersion daycare center in Burnsville and at the same time I lost my job, their child care center was going to be closing because the building got bought out and it was being developed into something else.”

El Bosque EncantadoFeeling defeated, Moras said her husband encouraged her to open her own learning center.

“My husband is very entrepreneurial and he said to take the things I thought they could have done better and put them in our community where we live. So, that’s what I did,” said Moras.

El Bosque Encantado opened in 2013 and is now in its ninth school year.

“We are licensed as a childhood center and I switched back to small children because all of the research talks about how much more quickly children can learn language and how much more valuable their brains are from birth to 5 years old.” Moras said. “The ideal time to learn a second language is when they’re very young.”

“There’s 23 million people that speak Spanish worldwide, and that’s a low estimate. I would say any competitive advantage, especially in the U.S. workforce, is really important,” said Moras. “I think diversity exposure is really important as well as living cross-culturally. The majority of the world speaks more than one language, it’s just not that common for Americans, sadly.”

Working with children for several years, she began her journey mentoring those going through the court system.

“When I worked in the public school setting, I had a student that I had a special bond with and that relationship still continues. That student ended up having a heroin addiction and he was incarcerated for three years,” said Moras. “Walking through his recovery with him and going to court and being a support person and advocating for recovery services — I just got really passionate about how many people need outside support.”

It takes a villageMoras said it was her former student who inspired her to help others going through drug and substance abuse issues.

“I just started being passionate about being a support person to people in recovery. Through that student and just being inspired, to me, it’s a calling that there’s a lot of work to be done,” said Moras. “I started teaching at the Scott County Jail with a friend of mine, Jennifer Pullman. We still teach but not during COVID. But we are going back after 600 days of not being in the jail.”

While teaching at Scott County Jail, Moras said she has met so many people that she started volunteering more hours along with several members of her church.

“Through teaching in the jail we met even more people who need more support. A lot of those people then enter and become participants in the Scott County Treatment Court,” said Moras. “Myself and some members of my church started going to treatment court to be community support people which basically you sit in the back and listen and over time meet people and learn their stories.”

Over the years, Moras has focused in on mentoring primarily women who are fighting for their sobriety. She was instrumental in starting Moms on a Mission for Success (MOMS). The moms and their children meet bi-monthly where they work on various topics and service projects. These young women form a much needed and powerful sobriety support group.

“The majority of the women that I work with now are mothers who are in recovery and they’re working really hard to manage the stressors of everyday life and they also need to be taken care of themselves for their sobriety and recovery,” said Moras.

a good stewardScott County District Judge Christian S. Wilton, who nominated Moras for the award, said she is deserving of the award for her endless desire to help those in need.

“Ms. Moras is deserving of this award based on her service, leadership and contributions to the administration of justice,” said Wilton. “She helps those that are in need the most, empowering others to gain control of their diseases and therefore control of their lives. As a result of her selfless and tireless efforts, many young lives have been altered in a positive fashion.”

Moras said she feels thankful for her recognition and hard work and looks forward to continue serving the community.

“I have a personality that wants to help and I want to serve my community and I want to help people. But, I will tell you that my largest surprise has been how drastically my life has been the one that has changed in a positive way,” she said. “It’s changed in the way I see people and maybe members of the community that people look down upon. I have been personally impacted and humbled and my life has been changed in the greatest way ever from the women I get to spend a lot of time with.”