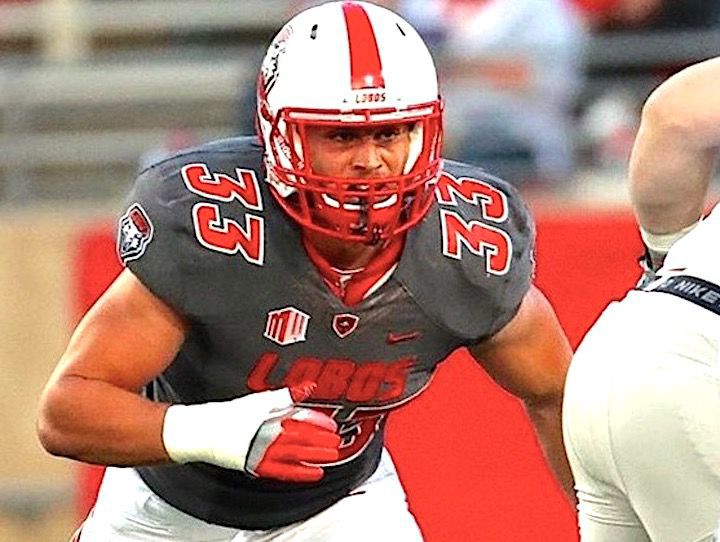 Alex Hart of Prior Lake is in his final season of Division I football at the University of New Mexico this fall.

Alex Hart is not used to being a spectator.

But that's what the 2014 Prior Lake graduate was last year for the University of New Mexico football team. Hart suffered a torn ACL in his right knee in the third game and had to watch the rest of the season from the sidelines.

It was supposed to be his senior season with the Lobos. This year will be that season instead: A medical redshirt has given him one more opportunity on the Division I gridiron.

Hart rehabbed his knee and was back on the field starting at middle linebacker for New Mexico in the team's 39-31 home win over Sam Houston State University on Aug. 31. He was second on the team in tackles with 10, including four solo.

New Mexico's defense suffered without Hart last year. The unit finished 113th in the nation in scoring defense (36.2 points per game) and 119th in total defense (473 yards per game).

The 6-foot-3, 235-pound Hart is a team captain for the Lobos. In fact, it's his third season as a captain, and only two other players in Lobo history have earned that distinction.

Before he suffered his injury last year, Hart had 19 tackles in the Lobos' first three games, including a career-high 13 against the University of Wisconsin-Madison.

As junior, he was third on the team with 58 tackles (30 solo) and in quarterback in hurries with five. He also had a sack, a forced fumble and a fumble recovery.

As a sophomore Hart recorded 28 tackles. He made one start at middle linebacker versus Rutgers University and made four tackles. As a true freshman, Hart saw action in nine games, mostly on special teams.

At Prior Lake, Hart was a finalist for Mr. Football in his senior year. He was a three-year starter for the Lakers both on offense and defense. He was also named first team, all-state his senior year by the Minnesota Associated Press.

Hart wasn't a bad high school wrestler, either. He won back-to-back Class 3A state individual titles on the mat, winning the 220 pound title as a junior and the heavyweight crown as a senior.

New Mexico is back on the field Sept. 14 in South Bend, Indiana, taking on No. 7-ranked Notre Dame. The Lobos will get their in-state rival, New Mexico State, at home Sept. 21.