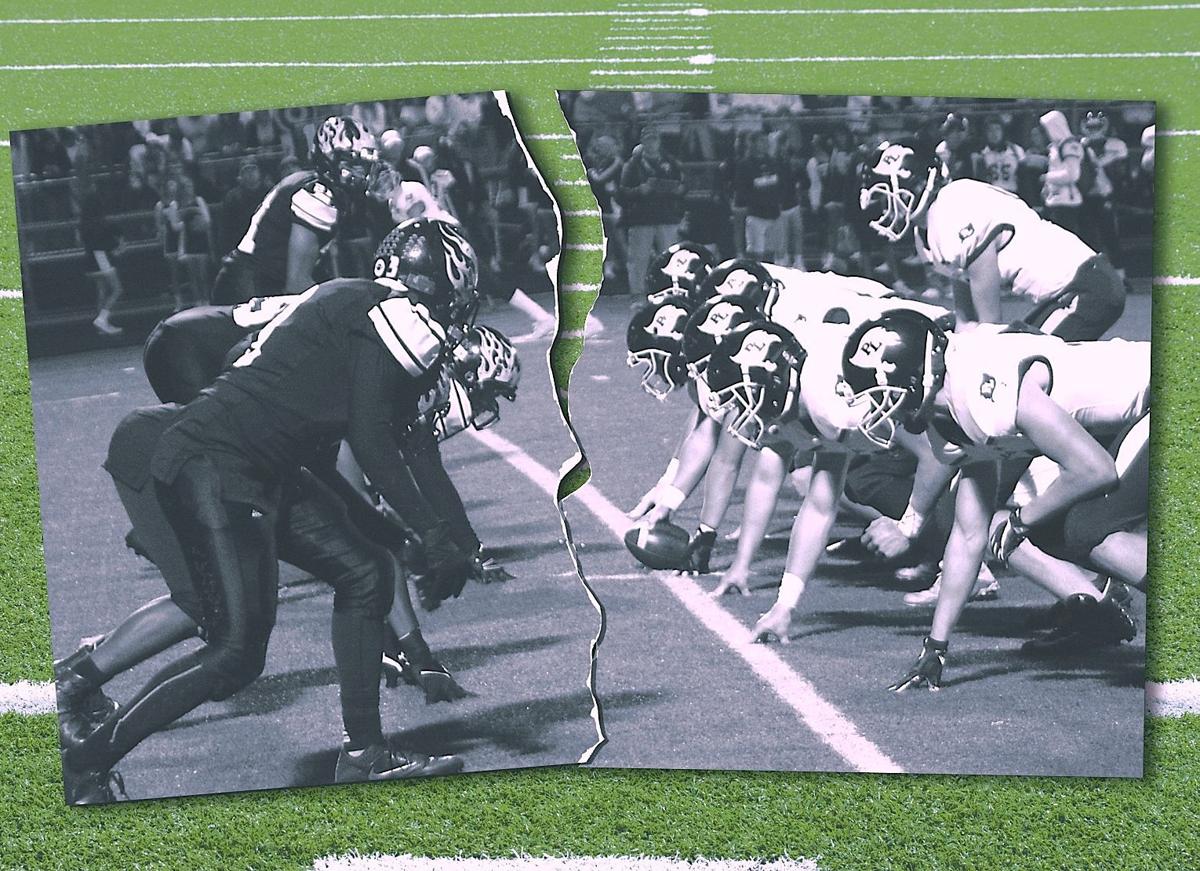 The 6A football playoffs starts Friday with 31 teams and not 32 in the state's biggest class after Coon Rapids successfully lobbied the Minnesota State High School League to move down to 5A before the season. 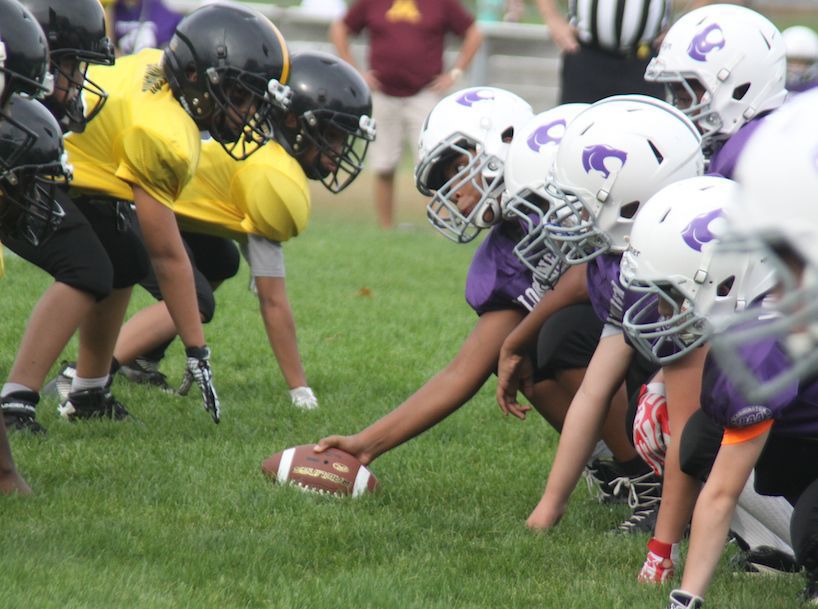 Burnsville and Bloomington have a combined population of roughly 145,000 and only 80 kids in grades three and four were playing tackle football this fall in a combined four-team league together. 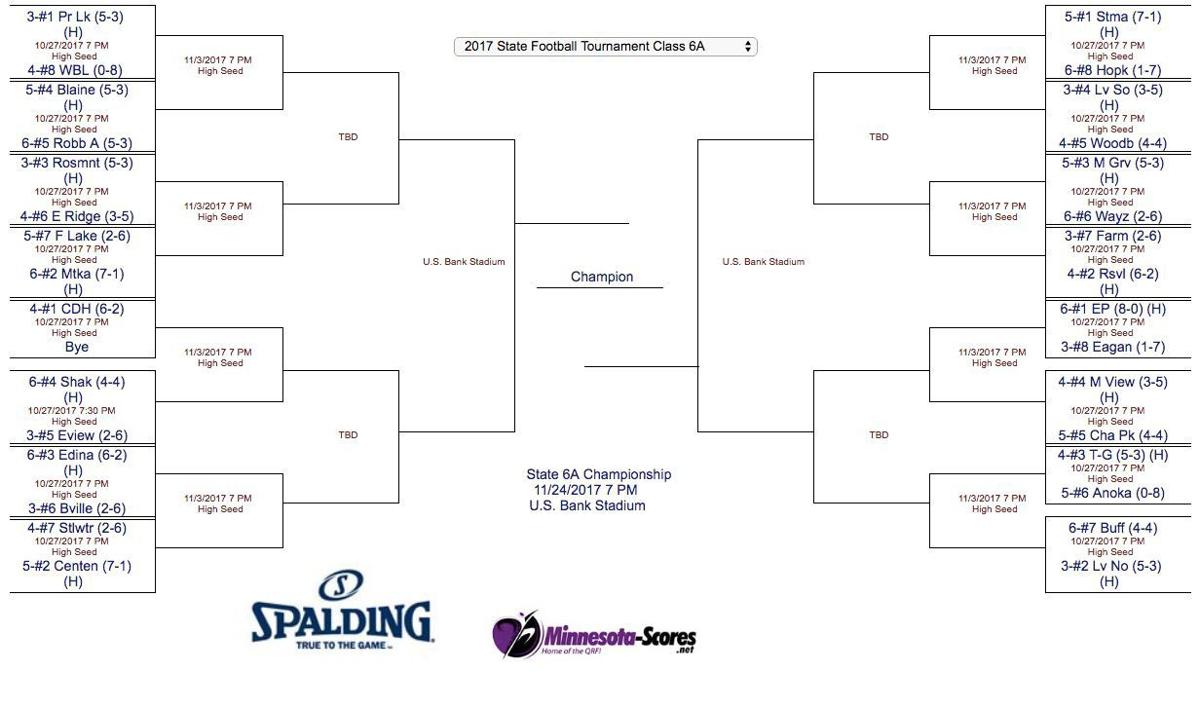 The 6A football playoffs starts Friday with 31 teams and not 32 in the state's biggest class after Coon Rapids successfully lobbied the Minnesota State High School League to move down to 5A before the season.

Burnsville and Bloomington have a combined population of roughly 145,000 and only 80 kids in grades three and four were playing tackle football this fall in a combined four-team league together.

Class 6A football in Minnesota is in its seventh year and big cracks in the foundation have formed.

Parity in the state's biggest class doesn't exist. The divide between the top programs and the middle to bottom ones is wider than the ocean.

The 31-team playoffs starts Oct 27. Yup, 31 teams and not 32. After losing 22 straight games, Coon Rapids successfully lobbied — or pleaded — with the Minnesota State High School League (MSHSL) to drop down to Class 5A. That left one 6A team with a bye in the first playoff round.

With participation dropping across the nation, is high school football entering a crossroads?

Will more teams like Coon Rapids lobby the MSHSL to get out of 6A and into the more competitive 5A class? There are probably at least a dozen schools that would love to break free from the 6A mess and Coon Rapids' situation has now set a precedent.

Has the 6A class developed a superiority complex? Not sure it should since many of the top 5A teams are arguably as good or better than about 20 6A programs.

Back in early August, one could argue 20 teams in 6A started with no chance of winning a state title, while 12 to 15 have almost no shot of winning two playoff games to make it to the quarterfinals.

So what's the state of 6A football? That answer is in three parts:

Concussions are on the minds of so many parents who question whether to let their kids play football. The answer — let them.

The concussion debate has morphed into a cherry-picking scientific studies assault on how safe the game is. It's like the debate on eggs. Can you eat them or not?

There are risks to playing football, no way around it. But there are also risks to playing hockey, lacrosse, soccer or any other contact sport. Parents have to deal with the risks and shouldn't let their kids compete in a plastic bubble.

However, the whole USA Football Heads Up tackle stuff won't make your kid any safer. It's just a way for USA Football, the NFL and in-house programs across the nation to alleviate fears in a game filled with violent collisions.

Heads Up Football is like making a spinach salad and then covering it with chocolate syrup.

There have been many studies about the safety of football and how concussions can impact health later in life, including CTE (chronic traumatic encephalopathy), which was discovered by Dr. Bennet Omalu in a 2002 autopsy on former Hall of Fame center Mike Webster of the Pittsburgh Steelers.

Google youth football and cherry pick studies to defend your argument, safe or unsafe. There's plenty to choose from.

Dr. Peter Cummings, an assistant professor of anatomy and neurobiology at Boston University School of Medicine, wrote a piece for Yahoo Sports on how he allows his kid to play youth football and he coaches it. He sees no risks.

Dr. Dyan Hes, a pediatrician and founder of Gramercy Pediatrics in New York, will not let her son play football because of the risks.

"I see too many patients with concussions. I think I’m extreme. I’m much more cautious than other parents because I’m a doctor and I see what happens," she told the New York Post.

A 2015 study in the Journal of Radiology, published at www.fatherly.com, "looked at 25 football players between 8 and 13 years old over the course of a season, using the Head Impact Telemetry System to measure the force of head injuries.

"While the sample size was small, the end of the season results were a real kick in the head. Namely, children still showed neurological changes associated with traumatic brain injuries, even without signs or symptoms of concussions."

It sure doesn't seem like the brain was meant to be knocked around in the skull. It appears long term damage can be done without a diagnosed concussion. But again, that goes for other contact sports too.

There are multiple studies looking to see if the risk of CTE is more genetic-related rather than just repeated head blows. If you have cancer in your family, your risk for cancer increases. Is it the same for CTE, related to such diseases as Alzheimer's or dementia?

Are some people more prone to develop CTE than others based on genetics? Not every football player who has died in the past 50 years has died from CTE, not even close.

But there's no doubt concussion fears have driven kids from the game. According to a 2015 study from the National Federation of State High School Associations, there’s been a 2.4 percent dip in high school football participation over the past five years.

So take a 6A high school team with no chance to compete with the top-level programs, add concussion fears, a poorly run youth program, and that's how the competitive balance becomes out of whack and will likely only get worse at the current rate.

Bloomington and Burnsville have a combined population of roughly 145,000. Between the two cities, only 80 kids were playing tackle football in grades three and four this fall.

There were four teams in the league, three in Bloomington and one in Burnsville. If those numbers don't tell you youth football is on the decline, nothing will.

Just 30 kids played flag football in Bloomington this fall in grades one and two. Concussion fears are obviously a big part of both of those meager numbers.

But a win-at-all-cost mentality at the youth level doesn't help either. The top-two teams in the Bloomington-Burnsville league had four players handle the football roughly 90 percent of the time all season. Some parents must have really enjoyed watching their kid play tight end for 90 minutes, bumping into the kid in front him 15 to 20 times a game and then going home.

Is that how youth football is played now? No wonder numbers are down. Why isn't there a carry limit, so multiple kids have a chance to run with the ball, play quarterback or catch a pass? Why should a few kids be allowed to stay on the field for offense and defense nearly the entire game?

How about a rotation rule? You play two series in a row, you sit the next one. Let all kids regardless of their ability play multiple positions if they are eligible to.

This is not the 1970s. Back then, kids played either football or soccer in the fall. They have multiple options now. There's year-round hockey, basketball and lacrosse, which didn't exist 20 years ago. There are track clubs, fall baseball, tennis and golf leagues, mountain biking, wrestling and karate.

That awkward, uncoordinated kid who plays guard in fourth grade; he may grow six inches in high school, thin out and find himself athletically. And he may be running cross country or playing soccer because he was told indirectly by a clueless youth coach at age 10 that he didn't really matter at that time in football.

The point being concussion fears are not the only problem hurting the youth level. If parents allow their kids to play, coaches better be fueling that kid's passion for the game, regardless of ability and minus the win-at-all cost approach.

There should also be more flag football options, including leagues using the tackle bar (www.tacklebar.com). Be more innovative, create more skilled-style camps and leagues and then maybe the high school team will benefit down the road.

Football is also the one sport you don't need to play as a kid. You can pick it up in high school. If you are big or fast enough or just plain tough, coaches will find you a spot.

Try not playing tennis, golf, soccer, baseball, basketball, hockey, wrestling or even lacrosse as a kid and pick it up at age 15. Good luck.

Coon Rapids enjoyed a 5-3 regular season this fall, its first winning campaign since 2010. The Cardinals had a combined record of 6-48 in six seasons in 6A.

Think the Cardinals want to stay in 5A? If forced back up, what are the chances the Coon Rapid program folds in five years? That wouldn't be good for the community and the school's athletic program since Friday night football can bring in revenue.

The 6A level has also become tough to watch at times, really dull with a lot of blowouts, unless it's a matchup of known quantities. The 5A level has more parity and as many good athletes.

The MSHSL will continue to get requests from smaller 6A teams to move down. Who knows, in five years there might be 24 teams in 6A. Some programs may have to fold.

Football still has more participation than any other high school sport, according to the NFSHSA. But it takes at least 40 juniors and seniors in 6A to at least by a .500 team. Eagan has just 50 kids on its roster, which includes sophomores. Forest Lake has 55.

The better kids may just end up transferring to the top programs, leaving the 6A level with an even wider competitive gap than what exists now.

And it can't get much wider.