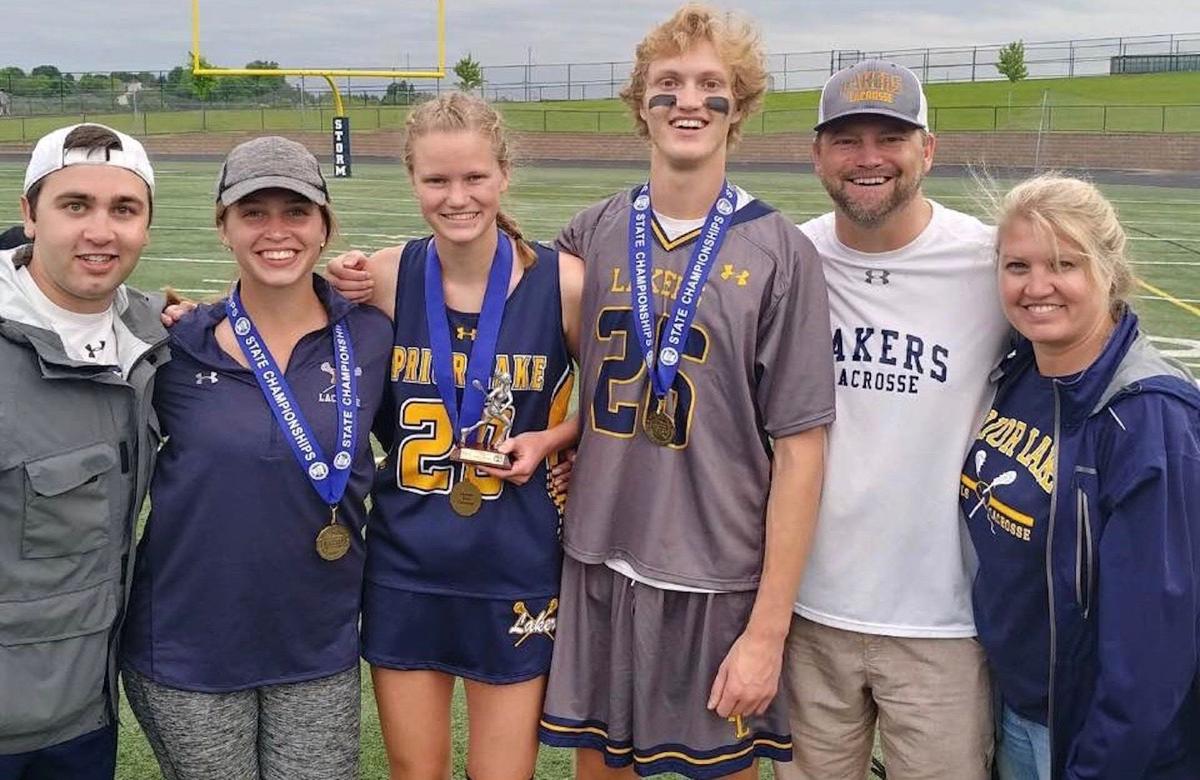 The Bloedow family following Prior Lake winning both the boys and girls state titles in 2019. Siblings from left are Austin Polson-McCannon, Alexa Bloedow, Payton Bloedow and Luke Bloedow with parents Scott and Shannon Bloedow (far right). 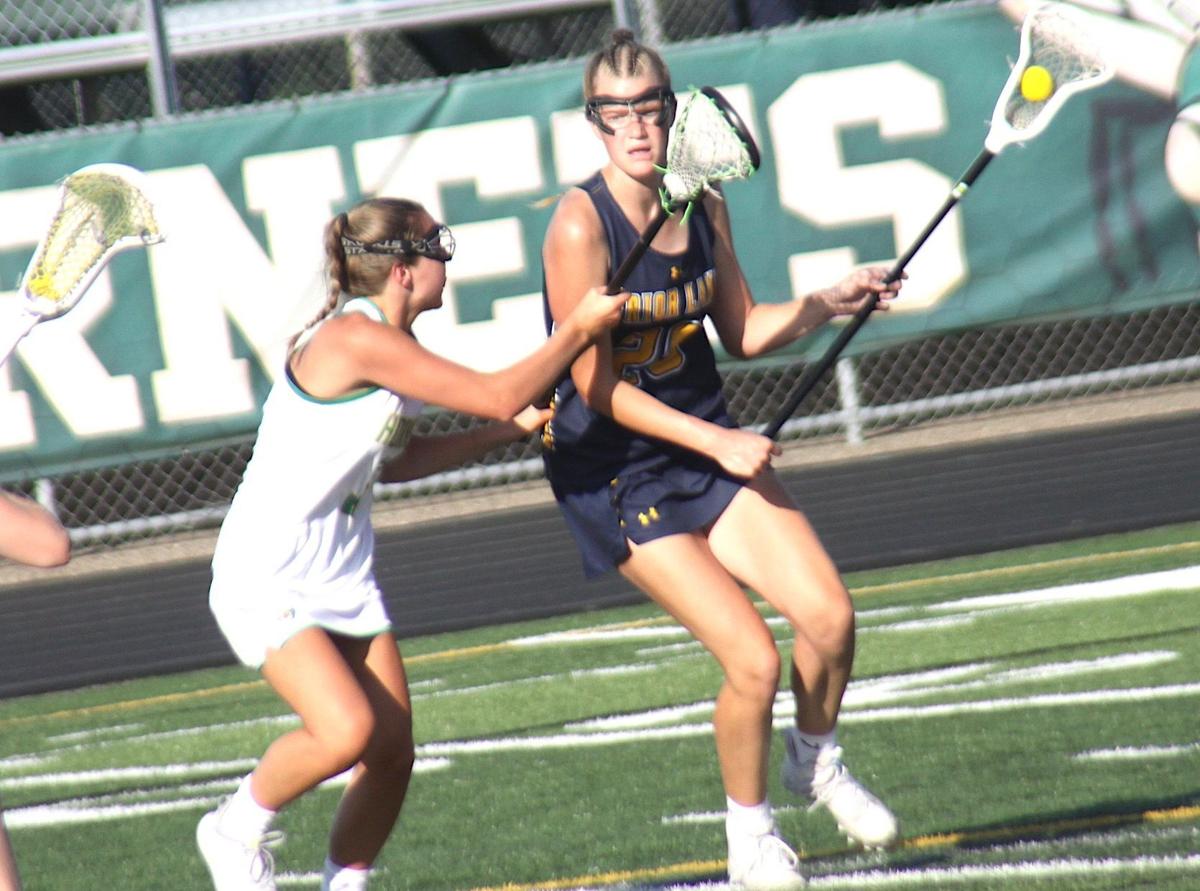 Senior Payton Bloedow scored 84 goals for Prior Lake this past spring, helping the Lakers to a second straight state title. She was also named Ms. Lacrosse. 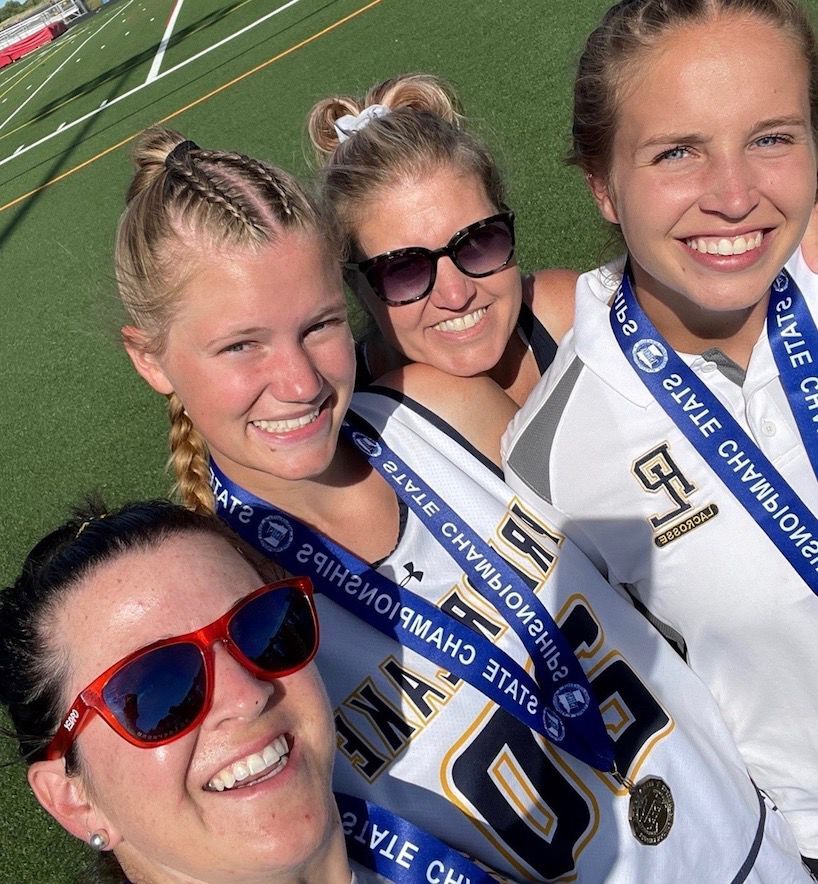 The Bloedow family following Prior Lake winning both the boys and girls state titles in 2019. Siblings from left are Austin Polson-McCannon, Alexa Bloedow, Payton Bloedow and Luke Bloedow with parents Scott and Shannon Bloedow (far right).

Senior Payton Bloedow scored 84 goals for Prior Lake this past spring, helping the Lakers to a second straight state title. She was also named Ms. Lacrosse.

Payton Bloedow capped off her amazing career on the Prior Lake girls lacrosse team with the state’s top honor.

The 2021 graduate was named Ms. Lacrosse, the first-ever Laker to earn that distinction. She led the team to a second straight state title back in June, finishing her senior season with 78 goals and 18 assists.

“Ms. Lacrosse is obviously such a high honor and I’m so grateful to have won the award,” said Bloedow, who will play Division I at Stony Brook University in New York, but won’t start until the 2022-23 school year. “This award shows how much work I’ve put in behind the scenes.

“My teammates deserve a lot of credit as well for always pushing me and supporting me throughout my career,” Bloedow added. “I’m so lucky to have played at Prior Lake and I’m excited for what my future will bring.”

The sport of lacrosse runs deep in the Bloedow family. Payton’s three older siblings, Austin Polson-McCannon, Alexa Bloedow and Luke Bloedow, all played for Prior Lake.

Payton’s father Scott Bloedow was a former player at the University of Minnesota-Duluth. He’s also served on multiple boards for lacrosse, including Prior Lake Athletics and the high school booster clubs.

But one could argue, Shannon, Scott’s wife, has been the glue to make sure nothing fell apart in the family’s seemingly seven-day-a-week lacrosse world.

“Without the amazing parents in the (Prior Lake) lacrosse community, we never would have been able to make it work,” Shannon Bloedow said. “The four kids were all close in age with only 6 1/2 years between the oldest and the youngest. I was a professional chauffeur for years until slowly the kids or their friends could finally drive.”

Scott Bloedow also coached the kids in youth lacrosse, so he could help chauffeur as well.

“My introduction to lacrosse came in college; I was on the first team at UMD,” Scott Bloedow said. “High school lacrosse didn’t exist back then either, so no one had ever played before. Since the internet was still a few years away, we learned how to play out of a book.

“As soon as I found out that Prior Lake had lacrosse and, as each kid was old enough to play, I signed them up as soon as I could,” he added. “There was a great group of passionate parents (in Prior Lake and Savage) who were involved and put the growth of the sport above everything else.

“Although many of these families weren’t fortunate enough to be a part of the state titles as their kids were already out of high school by that time, these state titles wouldn’t have happened without the foundation and culture they helped to build.”

Prior Lake’s boys and girls programs are two of the elite ones in the state. The boys won state titles in 2016, 2018 and 2019 and finished second this past spring.

The girls team has won five of the last six Section 6 titles, including the last two state crowns.

“Winning a state championship is a memory no one would ever forget, and we were fortunate enough to win back-to-back titles,” said Luke. “While each team had tremendous focus and work ethic, I looked forward to every single practice and game because I had so much fun.”

Austin Polson-McCannon was a 2014 graduate, before playing collegiately at Detroit Mercy. He’s now the program director at 36 Lacrosse, where his wife Katie Polson-McCannon is the co-owner with her brother Ted Sperides.

Katie is the director of the girls programs, while Luke is also a youth coach for the club.

Katie Polson-McCannon is also the B-squad coach at Prior Lake, while Alexa Bloedow is the junior varsity coach.

Alexa Bloedow, a 2016 graduate, was part of the first two Laker girls teams that won sections titles back in 2015 and 2016. She was a five-year letterwinner like Payton, who started her Lakers career the year after her older sister graduated.

“This 2021 Prior Lake team was the culmination of all of my coaching over the past eight years, and I have been so blessed to get to see these girls grow and develop over their lacrosse careers,” Alexa Bloedow said. “I started coaching Payton when she was a fifth-grader and now my first-ever group of girls has graduated high school, so to have them come out with a state championship this year was really special.”

Alexa Bloedow said she hopes that one day she could take over the Lakers varsity program.

Before taking over the Prior Lake B-squad program this spring, Katie Polson-McCannon hadn’t coached at the high school level since 2013. As an co-owner of a club program, she can be pretty busy and there are restrictions for high school head coaches coaching clubs in the offseason.

“As the prep-team coach at Prior Lake, I’m able to step in and assist with their pre-season captains practices,” Katie Polson-McCannon said. “This helps the program get ready for tryouts and aligns with my coaching philosophy overall.

“At 36 Lacrosse, we aim to prep players with small group and high repetition stick training. Captains practices are really where it all comes together and I’m so grateful to have that opportunity and help this team grow,” she added. “To be on the field with my sisters-in-law and sometimes husband has been the best time, too.

“Payton’s recognition and and being named Ms. Lacrosse brings tears to my eyes because it really shows that hard work pays off and I’m so proud of her.”

Austin Polson-McCannon has also commentated games for both Prior Lake teams the last three years. He said it was a blast to be able to watch Payton play, while he also admitted he learned more about the girls game, which is a little different than the boys.

Being with 36 Lacrosse has also allowed him to stay active in the game.

“I have a special opportunity to help the next generation of players achieve their dreams on the field and mentor them off the field,” said Austin Polson-McCannon, who met Katie at 36 Lacrosse.

Katie was also Payton’s coach before she met Austin.

Payton Bloedow made an immediate impact on Prior Lake’s varsity as an eighth-grader. She scored 32 goals to help the Lakers take third at state.

She had 29 goals as a ninth-grader, helping Prior Lake to a 15-1 record. The team’s only loss was to eventual state champion Apple Valley in the Section 6 title game.

As a sophomore, Payton Bloedow helped lead Prior Lake to the program’s first-ever state championship. She led the team in goals scored that year with 62.

Payton Bloedow’s junior year was wiped out due to COVID-19, making her school-record 209 career goals that much more impressive.

She gives a lot of credit for her success to her parents and siblings. The first time she played lacrosse was in the second grade. Her dad was the coach and Luke was one of her teammates.

Alexa coached Payton in fifth, sixth and seventh grade, while Katie started to coach her in club starting in ninth grade.

“Luke and I played in high school at the same time, so we were both competitors and supporters of each other on and off the field,” Payton Bloedow said. “Alexa and Austin were and still are my biggest lacrosse inspirations. We would drag each other anywhere we could practice, even the front yard or our elementary school to shoot at the fence using paper plates as targets.

“My parents were instrumental in my success as they were extremely supportive and always allowed me to sign up for everything,” she added.

Shannon Bloedow said many of the family vacations over the years centered around lacrosse, including road trips to watch Austin play at Detroit Mercy.

“We have memories of extreme weather, including tornados in Denver, snow storms in May, along with strange hotels, strange restaurants, terrible fields, amazing fields, unusual refs and awesome coaches,” Shannon Bloedow said. “But our family wouldn’t change one minute of it.”

"As soon as I found out that Prior Lake had lacrosse and, as each kid was old enough to play, I signed them up as soon as I could."