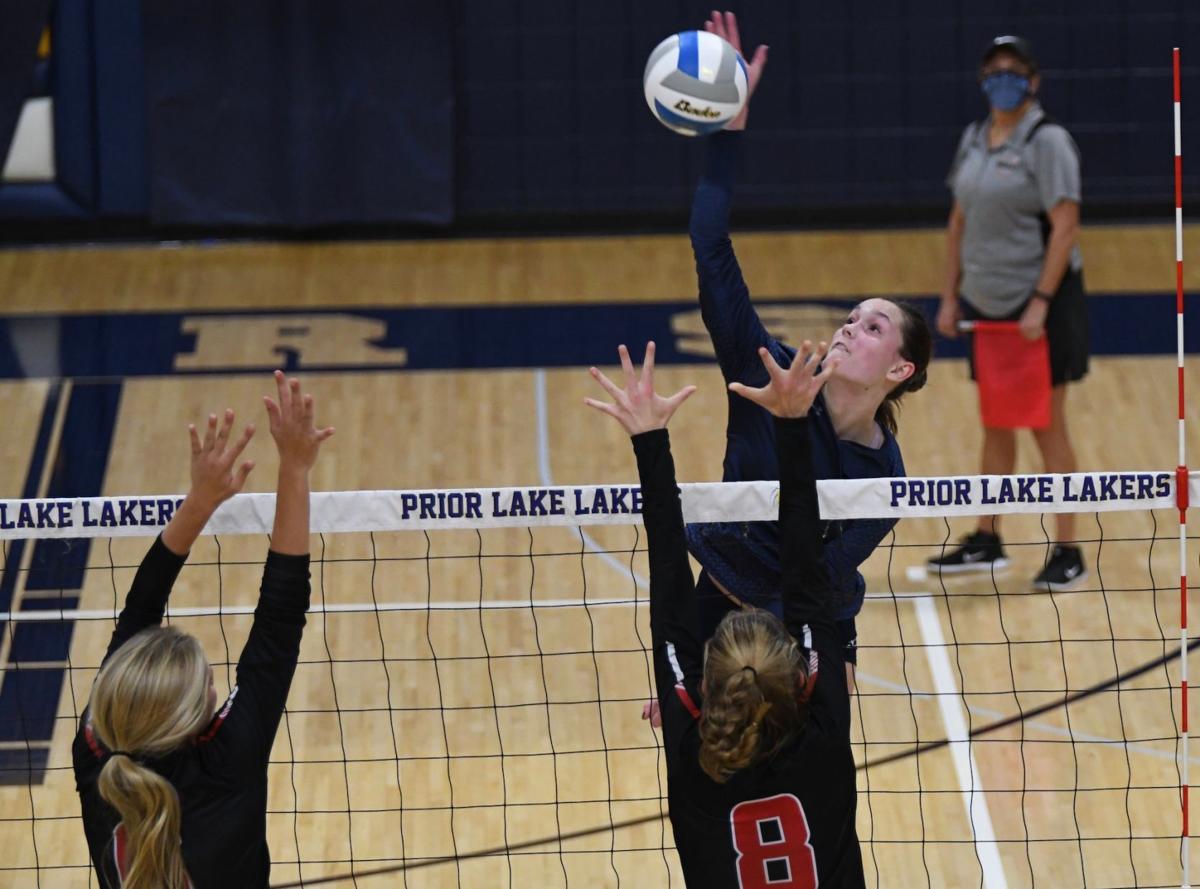 Junior Julia Hanson had 25 kills for Prior Lake in the Lakers’ four-set home loss to Shakopee Oct. 9 in the season opener. 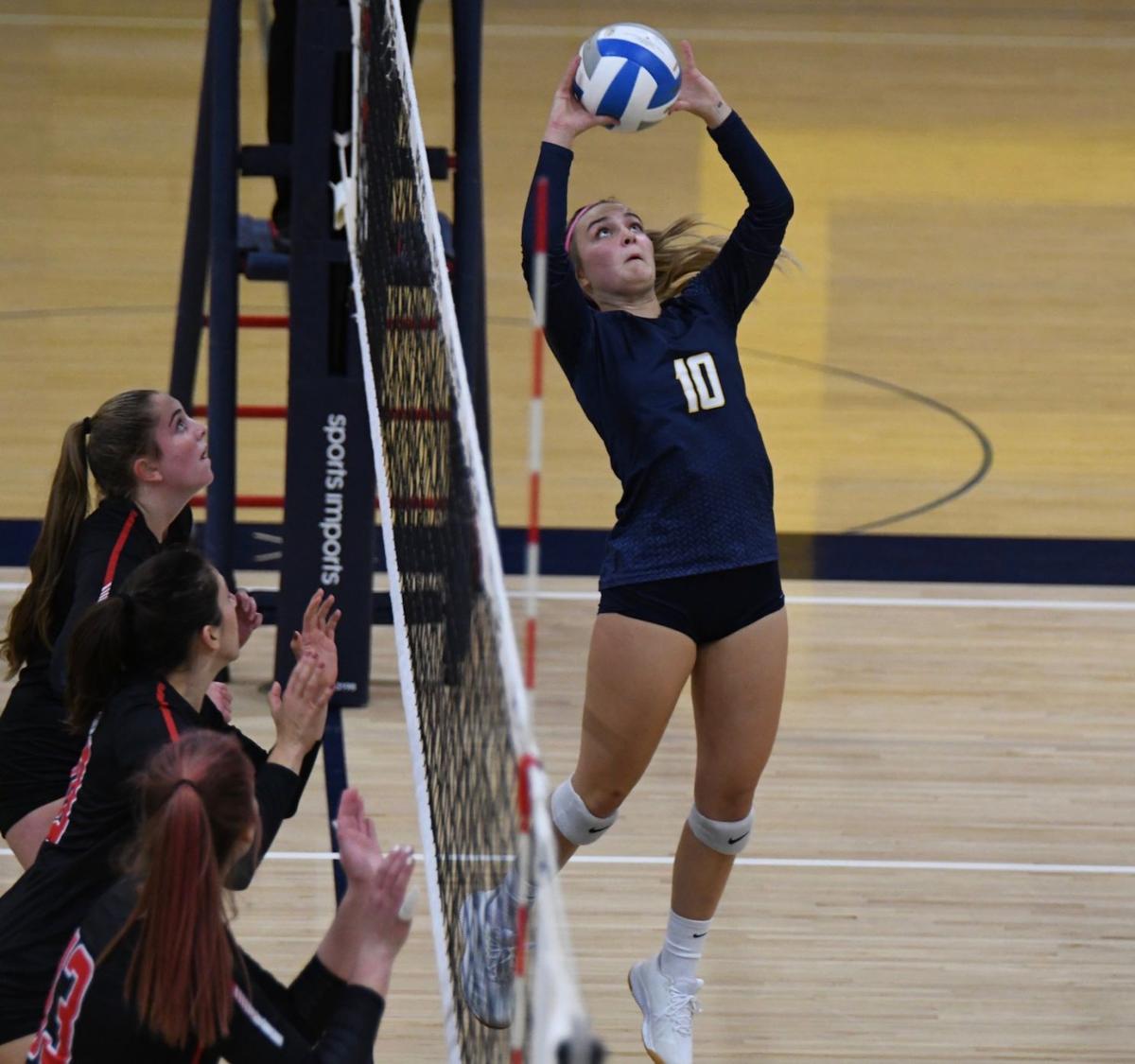 Senior Emmy Benson had 11 set assists in Prior Lake’s home loss to Shakopee in the season opener Oct. 9.

Junior Julia Hanson had 25 kills for Prior Lake in the Lakers’ four-set home loss to Shakopee Oct. 9 in the season opener.

Senior Emmy Benson had 11 set assists in Prior Lake’s home loss to Shakopee in the season opener Oct. 9.

Since winning three straight Section 2AAA titles, the Prior Lake volleyball team has been rebuilding.

The Lakers own a record of 25-34 over the last two seasons, including 9-9 in the highly competitive South Suburban Conference.

“We have a lot of players returning from last year’s squad, so we know what the varsity game feels like,” Lakers Coach Mike Dean said. “Hopefully, our experience can help us be ready for action quickly in this shortened season.”

Rebuilding in the SSC is never easy. The league is always loaded with elite teams, including four that are ranked in the first Class 3A state poll — No. 1 Eagan, No. 3 Lakeville North, No. 5. Lakeville South and No. 7 Shakopee.

The regular season this fall has been shortened to just 14 matches due to the ongoing coronavirus pandemic. In a normal season, teams play as many as 26, which includes three to four tournaments, before starting the playoffs.

Dean said his team has handled all of the uncertainty well, and just wants go out and compete.

“I’m really proud of how the team has rolled with the punches so to speak, and really had a mindset of appreciation for the opportunity and a willingness sacrifice some things to make this happen,” Dean said. “Girls are masking up during practice and developing contactless celebrations. Ultimately, they are loving being in the gym together.”

Junior Julia Hanson is back to lead the Lakers’ offensive attack. She finished last year with 386 kills and had 355 as a ninth-grader for a two-year total of 741. She added 25 more kills in the opening loss to Shakopee.

Ella Francis is the program’s all-time leader in kills with 995, so Hanson is quickly closing in on that mark with this partial season to play and her entire senior season yet to go.

Francis also holds the school record for kills in a season with 473 set in 2015. Hanson’s 386 kills last fall were third most in a season at Prior Lake.

Seniors Camille Libert and Bella Westerholm and junior Alex Lloyd are back to aid the offensive attack. Seniors Lainey VanHecke, Emmy Benson and Shannon Wallskog can all handle the setting duties and play on the back line.

Senior Annika Evenson and junior Courtney Hagen are back as defensive specialists.

“I think our experience and competitiveness will be strengths this season,” Dean said. “I also feel like our team understands how to play this game well and knows what it takes to be successful in our conference. It won’t always be what we want it to be on the court, but with mental toughness and grit, I think we can battle through adversity and find success.”

Minnetonka is the defending Section 2AAA champion, beating Chaska in the title match last year. The Skippers, ranked No. 8, and Shakopee are the only two ranked teams in the section.

Prior Lake was 0-1 in the playoffs last year after going 1-1 the year before.

“Ultimately, our goals are about continuous improvement on the court and coming together as a team,” Dean said. “We feel, that if we are able to play our best volleyball at the end of the season, we have a chance to have some success in our results.”