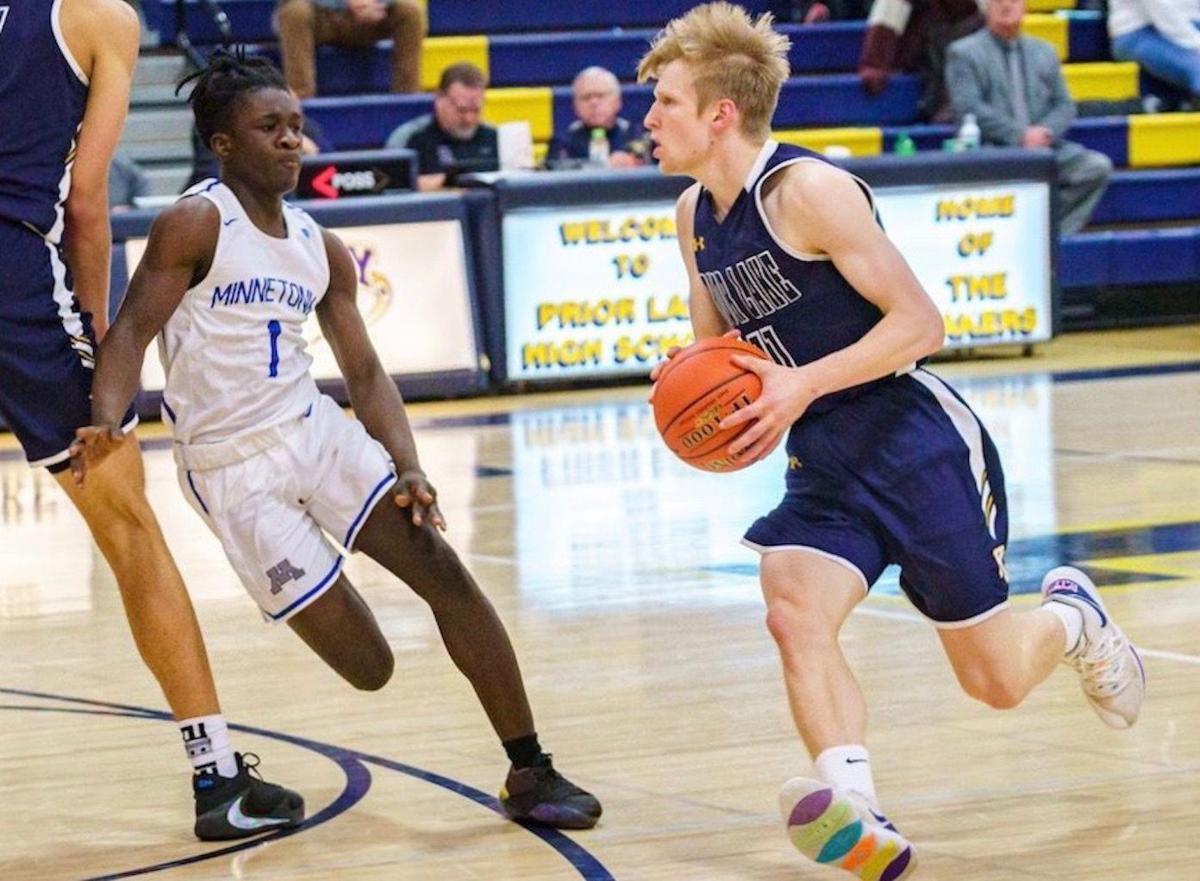 Prior Lake senior Tommy Mestnik will be one to watch for the Lakers this season as the team hopes to rebuild on the fly. 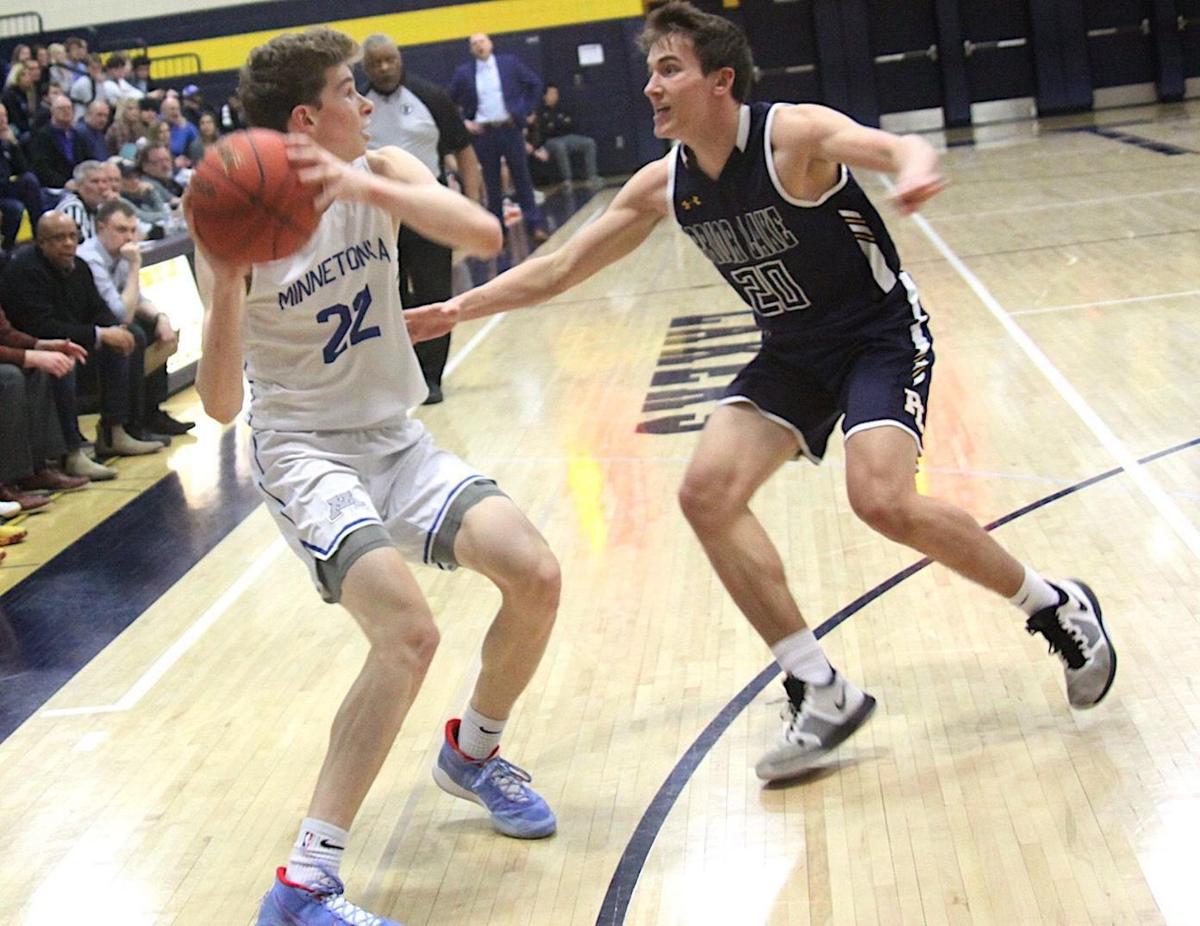 Senior Kyle McCullough is back for Prior Lake this season as the Lakers hope to be strong on the defensive end.

Prior Lake senior Tommy Mestnik will be one to watch for the Lakers this season as the team hopes to rebuild on the fly.

Senior Kyle McCullough is back for Prior Lake this season as the Lakers hope to be strong on the defensive end.

The Prior Lake boys basketball team had its first practice Jan. 4 and there was no Dawson Garcia there.

There was no Tyree Ihenacho either. Both Garcia and Ihenacho are on the Division I court at Marquette and North Dakota, respectively. Point guard Dylan Bair is also gone.

Those three combined to average nearly 52 points per game last season as Lakers finished with a 19-8 record.

So who will step up for the Lakers this season? That's a good question, according to Lakers coach Jon Miller.

"I think that everyone is asking the same question," Miller said. "It is impossible to replace players like Dawson, Tyree and Dylan. We are going to be more balanced one through 10 than we were last year.

"I would expect our senior leaders like Tommy Mestnik and Kyle McCullough to assume more responsibilities and leadership roles," Miller added. "(Junior center) Malcolm Jones will be expected to be a leader on the team this year as well. All three of those guys played valuable minutes on varsity last season and they should help lead our younger players in practice and games."

Prior Lake will open the season Jan. 14 in South Suburban Conference play at Rosemount, so Miller doesn't have a lot of time to prepare.

The ongoing COVID-19 pandemic hasn't helped either. Gov. Tim Walz shut down youth and high school sports for four weeks back on Nov. 18 and extended it two more weeks through the holiday break.

So the Lakers were left with Zoom meeting practices and individual workouts.

"Normally, we would have had a full summer of practices and over 50 games to work on individual and team development, but we were really limited this summer," Miller said. "We were really fortunate this fall to be able to practice a couple days a week and also play in the Concordia fall league and the Breakdown fall leagues for almost 30 games before being paused.

"All of our teams were really looking good and players throughout the program were making tremendous strides as individuals and teammates," Miller added. "The last six weeks without access to gyms were a challenge to all programs across the state."

Miller said teams that are in the best physical condition could have an advantage of the first few weeks of the season.

"Our guys have dedicated themselves to the weight room during the pause, but the challenge will be getting kids in basketball shape with only 10 days to prepare for the first game," Miller said. "We are going to be learning roles on the team without much preparation, but most teams are in similar positions."

Prior Lake shared the SSC title last year with Eastview and Shakopee with a 15-3 record. Prior Lake lost 99-74 in the Section 2AAAA semifinals to top-seeded Eden Prairie back on March 7.

That was also the last game for Eden Prairie as the Minnesota State High School League shut down all sports March 13 due to the pandemic and they didn't resume until this fall.

Prior Lake made it to the Section 2AAAA title game in 2019, but Eden Prairie denied the Lakers a state berth with a 62-45 win.

Eden Prairie graduated its entire starting five and will be rebuilding like the Lakers. But Section 2AAAA should be strong again this year, but with a little more balance.

Shakopee and Chaska look to be strong again, while Minnetonka, Edina, Chanhassen and Bloomington Jefferson are also in the field.

The MSHSL has not determined if there will be state tournaments for winter sports yet. There were no state competitions for fall sports.

Like all winter sports teams, the Lakers are happy to be back competing. Whatever happens with the playoff format, Miller believes his team should be a factor come March if it makes the necessary strides in January and February.

"I think that we are going to surprise teams this year with our defensive pressure, ball movement and fast break," Miller said. "We are going to be really a deep team that has many players that can score and defend.

"My hope is that everyone enjoys their experience playing the greatest game in the world," Miller added. "I want our kids to play with great passion and energy and the rest will take care of itself."