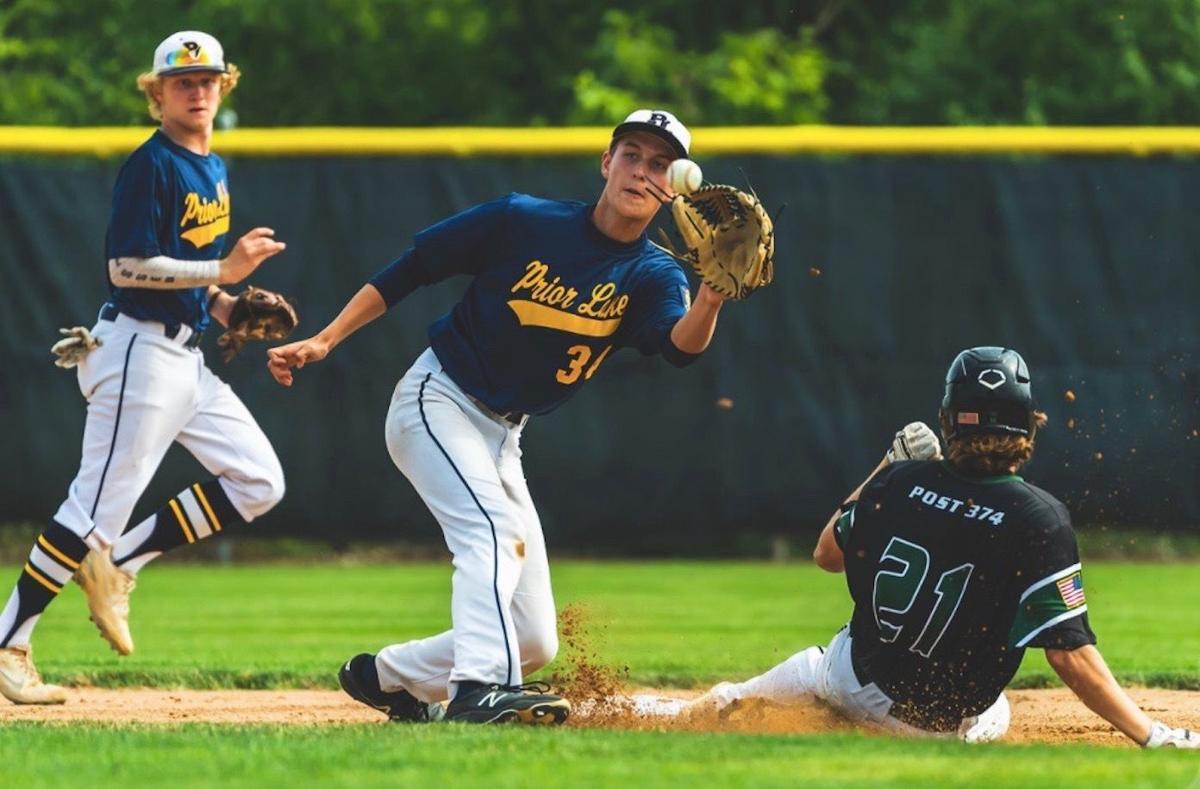 Ross Hebel looks to get the tag down at second base in Prior Lake’s 5-3 home win over Millard West, Nebraska in pool play of the Gopher Classic July 9. 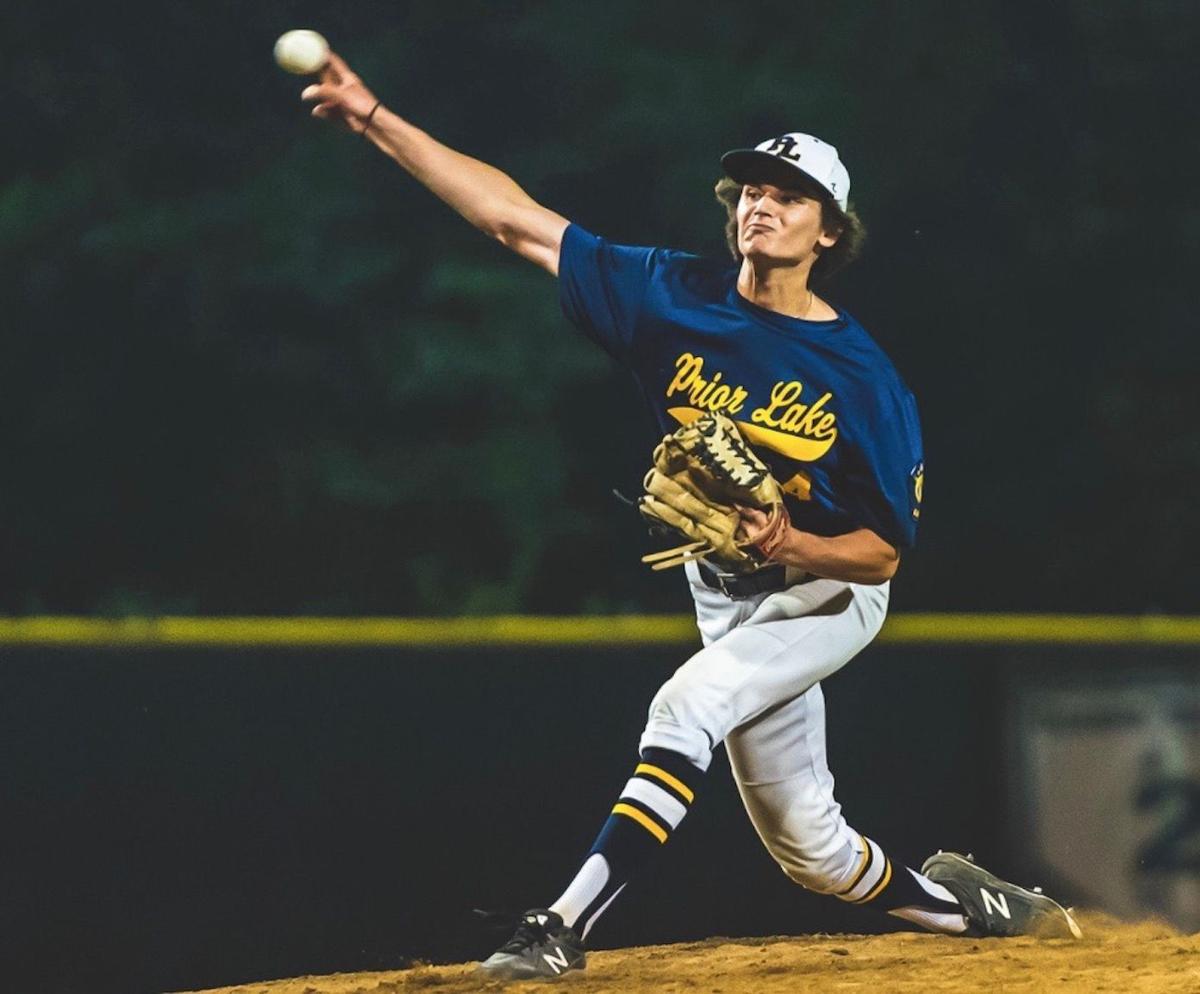 Carter Schuurmans delivers a pitch in Prior Lake’s 6-0 home win over Minneapolis Southwest July 11 during pool play in the Gopher Classic.

Ross Hebel looks to get the tag down at second base in Prior Lake’s 5-3 home win over Millard West, Nebraska in pool play of the Gopher Classic July 9.

Carter Schuurmans delivers a pitch in Prior Lake’s 6-0 home win over Minneapolis Southwest July 11 during pool play in the Gopher Classic.

The Prior Lake legion baseball team made a long run in the prestigious Gopher Classic.

Prior Lake won four of six games, advancing to the round of 16 in the 96-team field, before being eliminated July 12 with a 3-2 loss to Gillette, Wyoming at Minnetonka High School.

Prior Lake was one of the 16 host sites for pool play and the team won their pool with a 4-1 record.

The next day, Prior Lake bounced back two more wins to win the pool — 13-5 over Middleton, Wisconsin and 6-0 over Minneapolis Southwest.

In the loss to Gillette, Prior Lake trailed to rally in the bottom of the seventh down 3-1. Dustan Green’s two-out single cut the deficit to a run, but the tying and winning runs were left stranded at third and second base on a fly ball to center.

Rabey was also 1 for 3 with a run scored at the plate.

In beating Minneapolis Southwest, Cole Clausen and Carter Schuurmans combined on a four-hit shutout. Clausen struck out five giving up two hits in five innings of work. Schuurmans had one strikeout in two relief innings.

Ross Hebel led Prior Lake at the plate, going 4 for 5 with two RBIs. Goeschel, Green, Harry Fleek and Wyatt Larson also had RBIs.

Against Middleton, Prior Lake scored eight runs in the third inning to go up 12-4. Evan Bruce was the beneficiary of the run support tossing a complete game, allowing four hits, five runs (three earned) with three strikeouts.

Charlie Bredesen finished 2 for 3 with a triple and two RBIs at the plate for Prior Lake. Larson was 2 for 3 with three RBIs, while Clausen was 3 for 4 with a double and three runs scored.

In beating Brandon, Prior Lake led 6-3 going into the top of the seventh inning, before holding off a late rally. With two runs, Brandon had runners on first and second with two outs but Schuurmans got a fly out to center to end the game.

Lance Behrens got the win, working 6 1/3 innings and allowing four runs (two earned) with six strikeouts. Schuurmans got the save recording the final two outs of the game.

Goeschel led the offense, going 2 for 3 with a triple and four RBIs. Lucas Houske also had an RBI, while Hebel was 1 of 1 with two runs scored.

Against Millard West, all five of Prior Lake’s runs came in the third, which gave the team a 5-2 lead. Ryan Wattermann worked 6 2/3 innings with 11 strikeouts for the win, allowing three runs.

Bruce got the final out of the game on a strikeout.

Green was 3 for 3 with an RBI, while Jensen was 2 for 3 with a run knocked in. Clausen, Fleek and Ryan O’Connor also drove in runs.

In the loss to Rochester, Prior Lake got down 7-2 after five innings and couldn’t recover. Sam Brower took the loss, allowing 10 runs (six earned) in 6 1/3 innings. Houske pitched two-thirds of an inning.

Larson finished 2 for 3 with a double and three RBIs at the plate. Fleek also drove in a run.