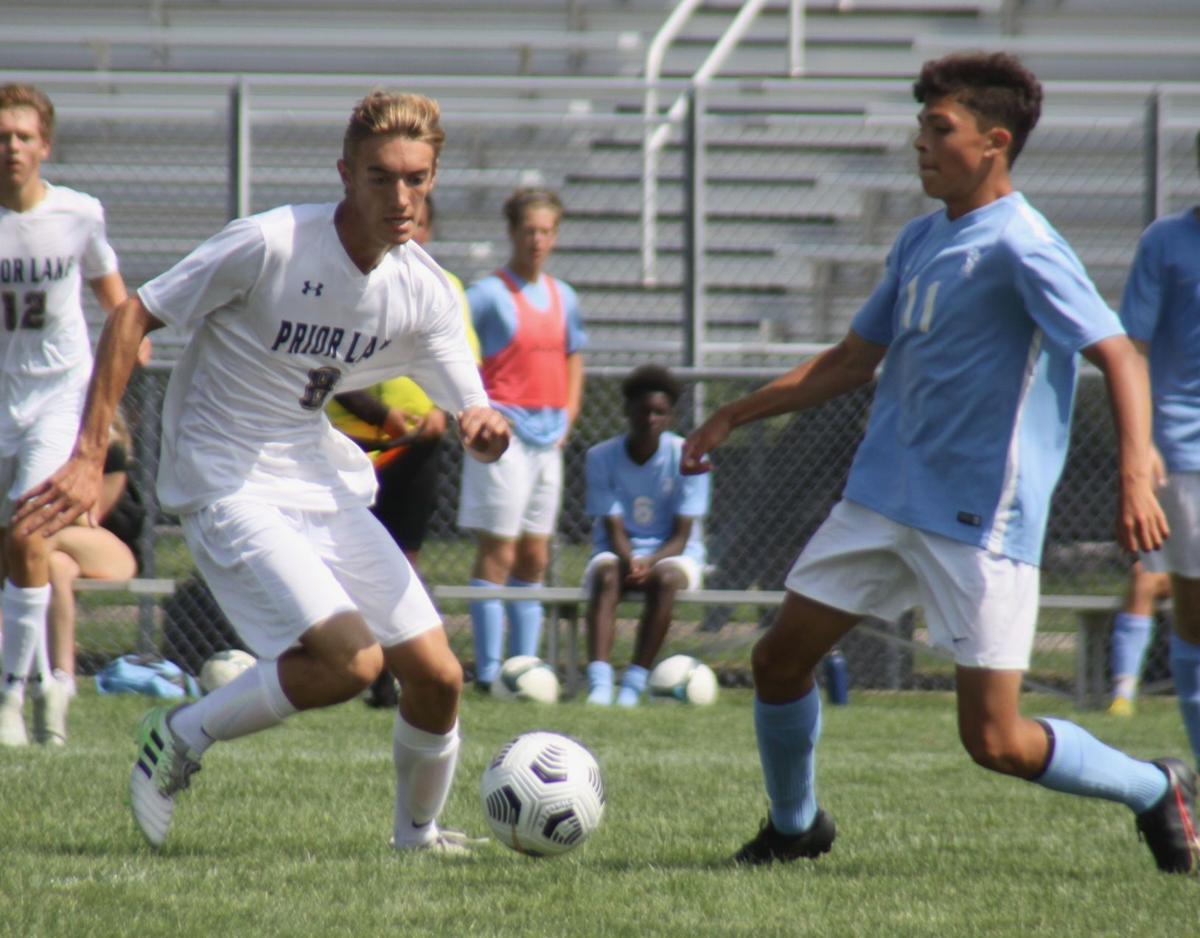 Senior Jack Loftus looks to get control of the ball in Prior Lake’s 6-2 win at Bloomington Jefferson Aug. 28. 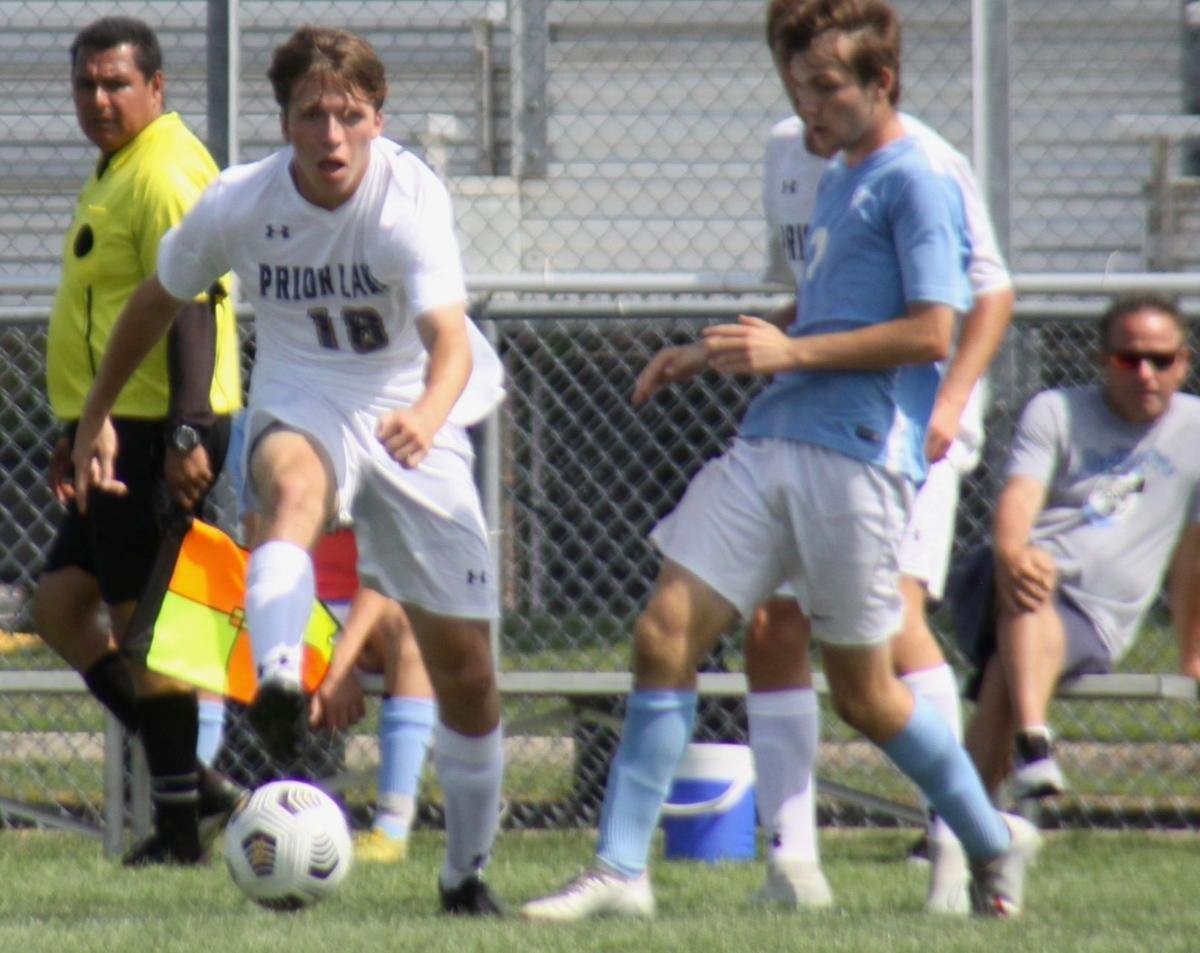 Junior Alex Carlson has control of the ball in Prior Lake's 6-2 win at Bloomington Jefferson Aug. 28.

Senior Jack Loftus looks to get control of the ball in Prior Lake’s 6-2 win at Bloomington Jefferson Aug. 28.

Junior Alex Carlson has control of the ball in Prior Lake's 6-2 win at Bloomington Jefferson Aug. 28.

The Prior Lake boys soccer team returns a solid nucleus from last season which should make them contenders come playoff time.

Prior Lake lost 3-0 in the first round of the Section 2AA playoffs to Minnetonka last year. The COVID-19 pandemic shortened last season and there was no state tournament.

Last spring, the Minnesota State High School League reclassified its sections for all sports and soccer moved to three classes. But the change didn’t change the Lakers’ playoff opponents too much.

Section 2AAA is still loaded with top teams, which include No. 3-ranked Edina, No. 4 Minnetonka, Eden Prairie, Shakopee, Chaska and Chanhassen. Bloomington Jefferson is no longer in the field, getting replaced by Waconia, a team that finished 9-3-3 last fall.

“Section 2AAA remains extremely competitive once again,” Coach Mike Shebuski said. “Year after year, we enter sections knowing that every team is capable of winning games, which is fun. I think Edina comes in as the team to beat, but Minnetonka is right behind them in those rankings.

Eden Prairie, Chaska, and Shakopee are always going to compete for the top spot,” Shebuski added.

Prior Lake has opened the season winning two of their first three games. The Lakers earned a 1-0 win versus Chaska Aug. 26, followed with a 6-2 victory at Jefferson Aug. 28 and then fell 1-0 at home to Woodbury Aug. 31.

Prior Lake will begin SSC play Sept. 9 at Lakeville South.

Lakeville North is the only SSC team ranked in first Class 3A poll, coming in at No. 9. The Panthers and Shakopee tied for the league crown last year with 7-0-2 records.

“Our hope is always to be able to field a team that is organized and competitive,” Shebuski said. “We’re feeling pretty good about being able to achieve that as we get started this year. We know we have a good group of guys, and we know they’re motivated to work together and reach the goals they’ve set for themselves, so we’re excited about that.”

In the win over Chaska, junior Luke Dahlen scored the Lakers’ lone goal with senior Zachary Gelman getting the assist.

Schultz also had two assists, while Giro, sophomore Elian Cuellar and senior Alex Reishus each had one. Senior Isaiah Peters made the start in goal and finished with eight saves.

Mathison made nine saves in the loss to Woodbury. The Royals scored the game’s only goal with 11 minutes left to play in the second half.

Others back this season for Prior Lake include seniors Cody Jenkins, Rohan Elvin and Mitchell Fust and juniors Sam Kohler, Alex Carlson and Logan Lehrer.

Others expected to contribute to the varsity are seniors Eric Nelson and Warwick Barker and sophomores Ethan Andryski and Spencer Ford.

“It seems the strength of our group is the desire and willingness to work to get on the same page,” Shebuski said. “Having a team-first mentality and wanting to find a system and style that is going to help this group find success on the field will be important, and the guys are open to engaging in that process.”